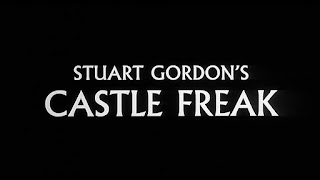 “I could wake you up, Sleeping Beauty. You are in my castle.” Director Stuart Gordon and actors Jeffrey Combs and Barbara Crampton had a good run together with the iconic 'H.P. Lovecraft meets splatter' flick one-two punch of Re-Animator (1985) and From Beyond (1986). However, with those two titanic entries in the horror genre, one of their other efforts – 1995's Castle Freak – has flown somewhat under the radar. Re-teaming with screenwriter Dennis Paoli, Gordon explores some deeply dark themes as he pits a self-imploding family man against the embodiment of his monstrous, tortured soul... 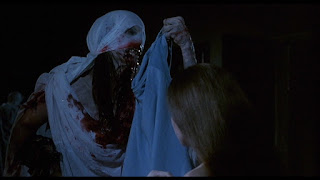 “That's good. You sell and then you go. Soon.” Gordon wastes no time in establishing the gothic vibe that the title suggests, as a haggard old crone – Duchess Gabriella Reilly – descends into the bowels of the old stone castle that she inhabits alone. Leaving behind bright blue skies, she stalks by candle light into the murk of a dank dungeon where a twisted secret awaits behind a bolted door. Inside there awaits some kind of babbling, anguished figure whom she promptly whips bloody with a well-worn lash and little in the way of remorse. It's a ghoulish introduction, but one which deftly sets expectations for harrowing secrets to come. 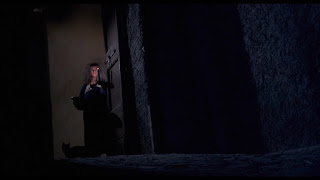 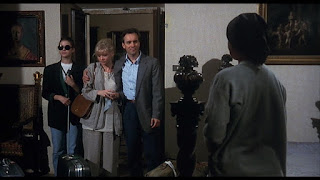 After the Duchess' death, her sole heir – John Reilly (Jeffrey Combs, The Frighteners) – inherits the castle and brings his family to stay while he wraps up the estate. This is far from a surprise getaway in the Italian countryside for them, however, as their tragic back story is soon revealed. John is a former professor, sacked from his university and nine months sober since the death of their son J.J., taken from them in a car crash while John was drunk at the wheel. As if that loss wasn't awful enough, their daughter Rebecca (Jessica Dollarhyde) was also in the car and was left blinded and scarred. John's wife Susan (Barbara Crampton), meanwhile, struggles to find the forgiveness expected of her while squirming away from John's flailing attempts at intimacy. 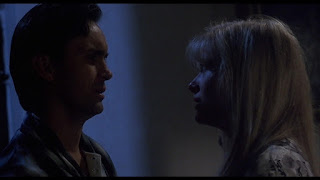 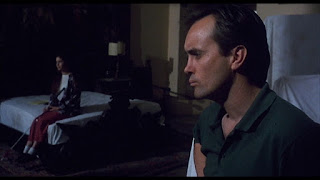 “They say the castle is … haunted.” Tormented by his nightmares, John wakes in the middle of the night howling in distress, but discovers his own wails are matches by someone, somewhere, in the depths of the castle. Was he hearing things, or is the castle cursed? The awful history of the place, of the Duchess' foul deeds (what little is known to the townsfolk, at least), cracks open Pandora’s box. The twisted ghoul – the titular freak in the castle cellar – is not dead and a new lease of life inspires him … it? … to break free and explore a world beyond its prison cell. 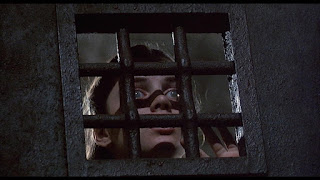 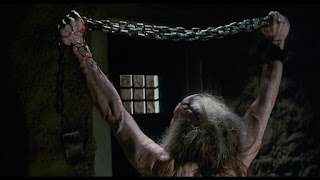 “That's all we need – seven years of more bad luck.” The most impressive aspect of Castle Freak is its use of multiple narrative themes and mirrored experiences shared between the characters. The comparison between John's tormented soul and the freak's literal torture is clear enough to see, but subtler details reveal the depth of the story. Rebecca's disfigurement and newly experienced disability are, in many ways, like her own personal prison making her a captive, so it's only fitting that her innocent exploration of the cellar inspires the escape of the titular monster. Indeed, once the monster is exposed to its hideous form, it shatters a mirror and finds comfort, even a warped kind of confidence, in discovering Rebecca's blindness (her soft, kind words awoke the monster from its deathly slumber). Trapped within her own world, Rebecca's parents fail to listen to her warnings that they are not alone in the castle – fears which are in-turn ignored by the authorities. 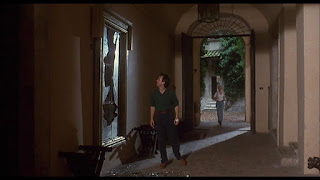 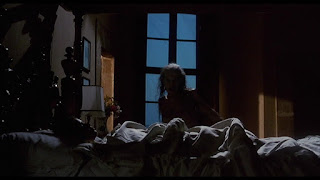 Similarly, there are familial themes revolving around sons, fathers, and brothers – even illegitimacy and incest are touched upon. Without spoiling anything too important, the final shots of the film between the policeman, his son, and Susan impressively encompass many reflective lines and thematic elements that are embedded throughout the narrative. The clearest use of reflective themes and characters falls upon John and the freak, naturally, with a sordid stream of sexual frustration running between the pair of them for very different reasons, and all these disparate elements each find their way to fold back in upon themselves or bind other characters in deliciously twisted ways. 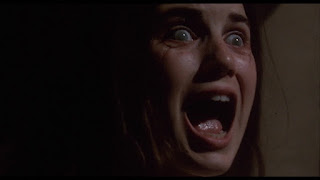 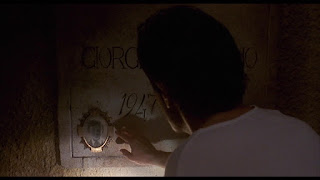 “No more fairy tales – tell me the truth.” Fans of Re-Animator and From Beyond might be somewhat surprised by the slightly more restrained and literary feel of Castle Freak – even though gruesome moments of gore, and the fantastically ghoulish full-body make-up applied to the titular freak (played by Jonathan Fuller), provide plenty of genre juice. The characterisation is simultaneously simple yet deep, with the scenes gaining a sense of power that speaks to Gordon's history of working in the theatre where the deepest depths of every character are dragged out from within by the actors and their writer and director. Combs gets to run the gamut from an impotent failure to a drunken fool, from a raging captive to a man doing battle with his inner demons, while Crampton progresses from earlier, more innocent characters to essay a wife and mother trapped by her grief and resentment. 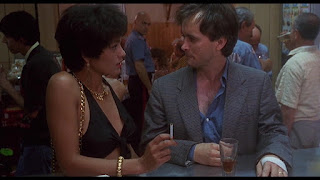 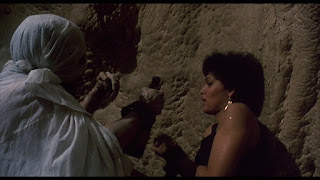 While the film doesn't quite capture the same intense and iconic feeling that Re-Animator and From Beyond both have in spades, Castle Freak is nonetheless an impressive gem, one that has somewhat fallen into the shadow of its predecessors, but one which similarly displays the talent of the creative minds and performers involved. 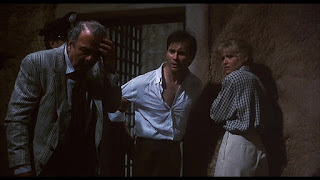 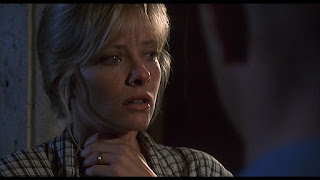 “Did something wake you?” 88 Films' 2015 release of Full Moon Pictures' Castle Freak is a mixed bag. While the picture is restored and in its original aspect ratio, the quality varies throughout the film with some sequences or shots displaying a fair bit of print damage or mismatched colour timing. The audio, meanwhile, is generally good, although the remastered sound effects (such as lightning, or a smashed vase) are conspicuous compared to the original audio track elements. That's often the trouble with remastered audio tracks – a similar example would be the remastered surround sound track that was put together for Jaws, which featured some exceptionally prominent sound effects (e.g. shattered glass). While so many of these genre favourites were mixed before the days of home surround sound systems, or even basic stereo, the original non-remixed track should always be included for those viewers who want to hear the movie as it was when they first saw it (e.g. the lack of the original audio track on MGM's UK DVD release of The Terminator from a while back was an egregious lack of regard for the fans). 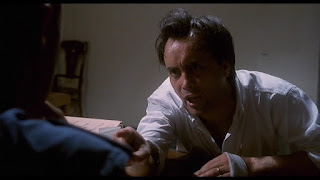 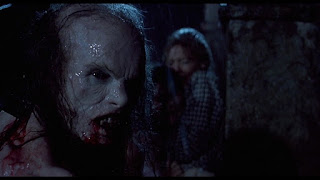 Extras wise you're not going to get much. Aside from a selection of trailers for other Full Moon titles, you get the film's original trailer, and the original 10 minute EPK from 1995. Considering the depth and breadth of the various themes featured in the film, it's a shame that we don't even get an audio commentary. Then again, Castle Freak has always been overshadowed by From Beyond and especially Re-Animator, so it's hardly surprising that this 1995 gothic horror hasn't been afforded a better release. However, until it does (if it ever does), and you're wanting to re-visit, or experience for the first time, this Gordon/Combs/Crampton flick, then it's a solid enough release.
Posted by Nick Thomson at 12:40