I've ranted on so long for this second "flavours of the month" blog, that I've split it into two parts.

As I'd said on a previous blog post a while back, I got back into Friends as it was showing from the beginning just when I got back from the hospital and began my (slow and painful) recovery - I was in need of something comforting and genuinely funny (fuck the haters, Friends is a great sitcom).

Anyway, it's been showing on E4 here in the UK, and this channel has been showing Friends on an endless series-in-entirety repeat from start-to-finish over-and-over since the show ended in 2004. At the moment they're getting through a season every 8 days pretty much, but what has really struck me now that I've been re-watching many of these episodes so consistently - is the sheer amount of censoring that E4 does to Friends nowadays.

There have been a whole list of examples over the past couple of months that I've been consistently watching these repeats of cutting the completely innocuous - and sometimes REALLY BADLY.

It is common for such an edit to leave a scene ending without a joke at all, indeed this sometimes leaves a scene falling flat, or in one recent example, leaving Monica apparently laughing AT Joey for no reason. Instead of a gag, it just seems like she's deliberately mocking him, due to the cut re-contextualising that whole section. Other times they skip the scene-ending gag and just cut awkwardly to the laughter - but what on earth are the audience laughing at?!

Well, comparing the E4 repeats to the uncut versions of the episodes, it's astonishing how in-offensive the excised content is, regardless of what time of day it is (these repeats are shown anywhere between 5pm and 10pm) ... some examples are:

Joey saying "no, I had sex in high school" - with that cut out, the scene ends with Chandler asking a question in a somewhat dismissive manner - no laughter - cut to the next scene.

Joey & Chandler's apartment gets robbed - this is the worst editing I've seen from E4 in these past weeks, truly awful. We don't see Joey being locked in the entertainment unit - instead the puritanical, censor-crazy morons at the E4 edit suite do a hack-job fade-in/fade-out quickly, horribly butchering the scene as if a child had been let loose with an Avid. Then when Chandler comes back home, he bizarrely teleports - thanks to yet another pointless edit - across the room in a split second - truly, truly awful censorship.

Ross can't call Joey "V.D. Boy" when they get into a fight over a girl, nor can he say "gonorrhea".

Nor can Monica giggle and say "plus everyone's gonna see your thing!" when Joey discusses a potential nude scene he'll have to shoot - nor can we see a handful of frames of a blurry pink-ish faux-foreskin fall between his legs during the closing credits (although this is the best example of censor-crazy editing exhibited in these last few weeks - the cut works well, but still - the cut footage is completely innocuous).

These are just a few examples that spring to mind right now, but believe you me there have been many, many such pointless and puritanically sensitive cuts from these episodes. It really is ludicrous - in fact it's offensive - what's being cut isn't offensive, but E4 seem to think that the public - most of whom will have seen every single one of these episodes at least three times by now - can't handle dialogue you could easily hear during lunch time television.

It's also really odd coming from E4 - part of the Channel 4 group - who a few weeks ago did a week-long special of lunch time art programmes featuring long, uncut, static shots of nude people for the purpose of those at home joining and drawing. I was all for that show, and thought it was a genuinely good idea - that went off without much of a hitch, not even the Daily Mail got exceptionally riled up about it like you'd expect them too ... but still, E4 insist on butchering the totally inoffensive from a family friendly sitcom.

Not on bus shelter adverts they say, and certainly not on television until after 10pm (the watershed is at 9pm) - you can say "fuck" repeatedly on Mock the Week which starts at 9pm, but you can't say "basterds" until after 10pm. Clearly, the moronic lack of common sense and joined-up thinking espoused by the Labour government since 1997 has truly infected our society further than any sensible person would have hoped...at least in my view, but you all should know by now how much I loathe Blair, Brown & their gleefully-dumb-but-dangerous gaggle of hypocrites extraordinaire.

However, at 10pm you can only show "Basterds" on the screen (rather than it being censored by bullet holes punctering the poster), you still can't say it - the name remaining "Quentin Tarantino's Inglourious" on the voice over.

Stupid ... really bloody stupid ... and to think us Brits laughed in exasperation at the Americans after Janet Jackson popped a nipple out.
Posted by Nick Thomson at 17:48

Find more giallo reviews here . “I'm telling you the truth – believe it or not!” Utilising much of the same cast and crew as h... 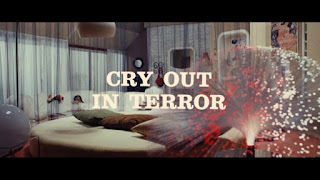