A rant about headlight use...

I've noticed this more and more in the last several months, but people are driving around - in broad daylight, sometimes blue-skies-and-sunshine - with their flipping lights on, be it side lights, normal lights, or even high beams and fog lights.

Seriously. What is wrong with these people? "Oh it's so bright I can't see! I'd better put my lights on!" There's no sense to it. You often see Volvo's driving around with their lights on during the day, but they have automatic sensors - now, those sensors are either utterly rubbish, or they need to be fiddled with in the on board computer (that's no doubt too complicated for the owner) so they aren't so sensitive.

But everyone else has no excuse. It's like they've all either - A) Seen those berks driving Audi's with those glitzy, blingy running lights around the headlamps, and thought "that looks so good, I'll turn my normal lamps on and then I'll be cool" - or - B) They saw some other moron driving around with their lights on at 4pm and thought "bloody hellfire, it must be dark out, I'd better annoy everyone coming in the other direction" - or - C) They saw someone coming at them with their lights on, found it thoroughly distasteful, and thought "right, if they're doing it, so am I, I'm not going to be an annoyee, but an annoyer" - or - D) They are blissfully unaware their lights are on (headlamps and/or fog lights) and that they look like an utter arse.

Whatever the reasoning, it's properly annoying and everyone should stop it at once. Anyone with their lights on during the day - when it's not very dull and/or rainy conditions (including those with their fog lights on when it isn't foggy) - should think twice about driving their car if they can't operate the lights responsibly.

Another thing that I touched on was those silly little lights Audi are putting on their cars these days. They're terribly 'bling' and while they may be (and are) fine on a swish, sporty, ostentatious and expensive Audi R8 (at night) - as evidenced below - they look stupid on anything else (even more so in the day light). 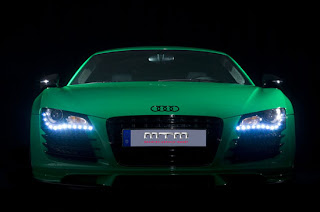 So please, if you're thinking of getting those lights on anything that isn't an Audi R8, smack your head against a wall for about an hour and then kindly realise you'll look like a berk.

And if you do have your lights on during the daytime - you know, when it's light out and you don't need your headlamps or fog lights on - switch them the hell off, and if you see someone else with their lights on during the day, don't follow suit like a dim-witted lemming. Mankind may be blighted by this tendency to blindly follow-suit, but do try and think for a minute ... something along the lines of "can I, and others, see where I'm going?" and if the answer is "yes, I can see where I'm going and other road users coming at me can see me" then leave the headlights off until it gets dark.

Okay rant over - but this is just one of the things that tends to really annoy me (and others) when I'm out on the roads ... oh and xenon headlights (especially during the day) can get stuffed too.
Posted by Nick Thomson at 17:29

volvos don't have sensors.. the headlights are just on permanently!