Shot as in filmed, not as in dead. To prove it, I've layered in a few screenshots from the raw, unedited footage. 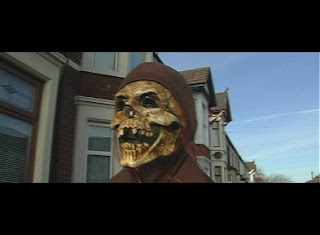 Indeed, two years behind schedule, but I always said I would eventually get around to it. In a sort of 'perfect storm', Knox and I found a window in which to film the entire thing. That window was the 28th December 2009, wedged right in between the festivities and some rather crummy (for filming) weather - fortunately yesterday had clear blue skies and sun and was above freezing, so for the few outdoor shots we were sorted.

The majority takes place indoors (what with the character being somewhat of a recluse these days, and that he's been forced to retreat inside lest hoardes of consumers flee at the very sight of his decaying visage). 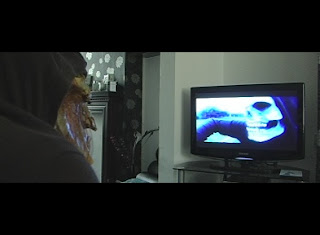 Indeed, this third (and final) in the I Am Zombie Man series will officially go by the title "The Inevitable Decomposition of Zombie Man" - but whenever I refer to it on this blog, I'll simply use the far easier "IAZM3" moniker. The world's most famous zombie (self proclaimed) has fallen on hard times, his much trumpetted fame and fortune has failed him and he's now a crumbling, drug-addled shell of his former self ... but he's still just as sardonic.

Today though it was all about uploading the hour of raw footage (I'm aiming for a 10 minute long short), and I'm pleased with what we got. It was a seriously hectic run & gun shoot; a real case of "GO! GO! GO! GO!" the entire time. A few hours with nobody else in the house, a few hours of mid-December sunlight, and a whole lot of shots to get. However, we got everything we needed, and while a test of my run & gun abilities, the last few years of filming in such a manner (both officially and on private endeavours) have served me well. 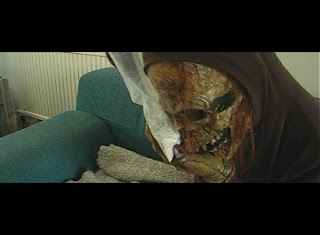 Of all my DeadShed shorts, this has definitely been the one that's been the most stressful. Not only has it had a two and a half year gestation time, but it's had the anticipation to go along with such a long absence. The Zombie Man series has its own little mini-cult going on, and those who dig it have been eager for the third entry - most of all Gary Ugarek and Brian Wright - they of Deadlands franchise fame, IAZM pimpage, WNWR Podcasting, and musical talent.

There were a fair number of props to gather, organise, purchase, and even produce - so that was another task for me on top of all the others. In true DeadShed Productions fashion, IAZM3 will be a small group producing it. 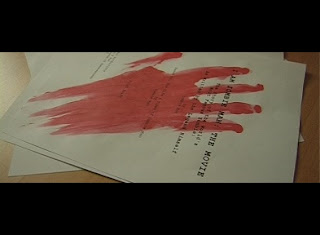 Gareth kindly stepped back into the bloody jeans, dirty hoody of old once more, and donned the brand new mask and gloves to boot. Gary and Brian are also going to very kindly help out with their musical talents - and this time they'll be scoring to a moving image for a change (previous collaborations have been about discussing moods, themes, and ideas ahead of me editing or even filming the short itself).

And then there's me - directing, writing, editing, shooting, recording (and voicing) the dialogue (of more than one character) and even getting on screen myself, plus any other little tasks (such as all that prop gathering, purchasing and creating). I don't say this to self-aggrandise, far from it, I say this just to illustrate how these DeadShed shorts get made. 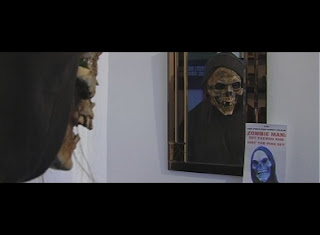 As such, this was indeed the most stressful of the DeadShed Productions shorts to date, so I think I'll make the next one a simpler affair - then again, that was always the intention after IAZM3.

Now begins the editing process, and similar to what I did with Skinner, I'll be sticking exclusively to Sony Vegas. I want to try out a couple of new ideas, and further improve my Vegas skills ... so bear with me, but I do hope to make January the month of IAZM3. 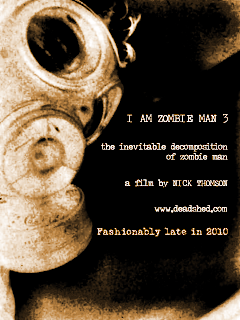