It's all change technology wise in my bedroom at the moment. My trusty CRT television is being put out to pasture, I've bought a new HD LCD TV and the half-working DVD player has been replaced with a Blu-Ray player.

There's also been a lot of tidying up going on, and in the flow of putting things out to charity bags and clearing the decks a bit, I circled round to my old laptop. 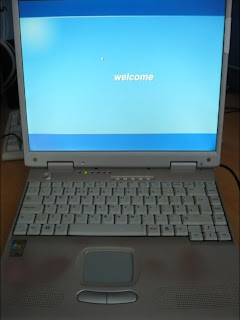 It was my very first computer that was just for me and I got it for going off to university in 2002. It served me very well throughout my degree, enduring constant use easily exceeding what would be considered "normal". One time it was connected to the internet and running constantly for a month before I had to restart it for some reason. I've often said that it has probably had a decade's use (and more, most likely) in half that time. Day-and-night, night-and-day it would run throughout my three years at uni and it did a handsome job of coping with the workload - not to mention spam and viruses.

In those days I was quite hap-hazard about such things, and as such the laptop had to be returned to factory settings more than once before I learned my lesson. However when it came time to install a new version of a well-known anti-virus software everything went arse-up ... back to factory settings, still no dice ... off to the shop and it was fixed, technically speaking, but it was never the same again and would always require a desk fan to keep it cool and finally it took to randomly freezing, crashing, failing to start up and so on.

Eventually I stored it away and it stayed there for three years until this recent bout of very-late-(or very early)-spring-cleaning took hold.

Being that laptops don't have normal hard drives however, destroying the data on it was a most unpleasant chore ... and incredibly messy. It's torn to shreds and sitting in parts in bags and boxes ready to be recycled - so at the very least most of its materials will go on to be used again in some other configuration.

It's weird to attach such ceremony, such as this blog post, to an inanimate machine, but like they always say on Top Gear about cars, when you've spent enough time with a machine you feel like there's a rapport there. You understand it's foibles and you know how to solve certain problems and you know how to treat it right. My laptop's even got a sticker on it from the time I went to see HIM perform on campus and Cathedral were the supporting act. As we left the venue a couple of the band members from Cathedral were handing out free stickers and we congratulated them on their show ... you always have a list of little memories just like that ... and with the passing of time, and old tech moving aside for new stuff, you get into that Blade Runner realm of tears in rain.

So having to go into the garage today and tear it apart to destroy the data held inside it was like having to point the shotgun at Old Yeller and pulling the trigger.
Posted by Nick Thomson at 19:21