A bit earlier this month, and I'm trying out a new style of doing this monthly blog post.

Friday 13th: Parts 2, 3 and 4 - what with it being a Friday 13th, they showed several of the films from the franchise. I'd forgotten how relatively tame the second movie was, with its really brief moments of violence, I finally got to see the third movie in its full 2.35:1 original aspect ratio (rather than the grainy Pan & Scan 4:3 VHS I've been used to), and to round things off I got to see the uncut version of the fourth movie.

Alan Wake OST by Petri Alanko - the perfect compliment to thinking about the game a lot (and giving the prequel short film Bright Falls another viewing).

I finally got around to, and finished, reading "Driven to Distraction" by Jeremy Clarkson. As is customary at Christmas, any self-respecting Top Gear fanatic will end up with one or more books written by one or more of the presenters. "Distraction" was an epic tome; a weighty hardback too large for comfortable reading ... but once I got back into the style of Clarkson's aritcles I enjoyed it as I always do.

I've been getting some good prep work done on "Allen Bridge" - my next script - but there's plenty left to think about. Speaking of scripts, "Summer Road" was finished off and posted off to the BBC Writersroom.

Finally there's been a lot of summer time painting and decorating going on (a task I'm good at, but find utterly mind-numbing), as well as some rather late (or rather early) spring cleaning - I've been digging through my chock-full cupboard, weeding out junk for recycling and items for charity shops. On top of all that my entertainment centre in the corner of my room has changed significantly. My trusty 21 inch Samsung CRT has been replaced with a 24 inch Goodmans HDTV ... my Naiko VHS player has been swapped-out for a 12 year old Sony monster chock-full of bells and whistles ... and to cap it all off the hand-me-down DVD player that had been gradually going on the fritz has been replaced by a Samsung Blu-Ray player. I've even got a new cable for my Xbox360 so I can game in HD. 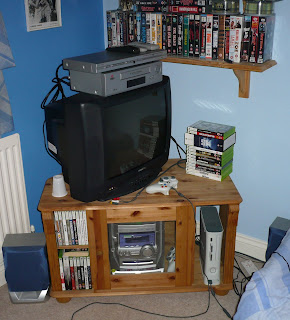 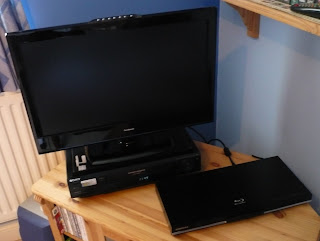 It was the announcement - after three years of waiting - of the home video release of the theatrical version of Grindhouse that pushed me over the edge. The 2-disc DVD has no new extras, whereas the Blu-Ray has all the existing ones and a whole shedload of new content ... and as a huge Grindhouse fan, it was the straw that broke the camel's back - I had gotten utterly fed up of home video releases of movies I was most looking forward to buying getting shafted on DVD in favour of Blu-Ray. Some other examples would be Cop Out, Kick Ass, and Iron Man 2. I'm an extra features whore (especially for making ofs, particularly if they're feature length), and so that Grindhouse announcement was the last straw and more than three hundred quid later, here I am!
Posted by Nick Thomson at 11:02