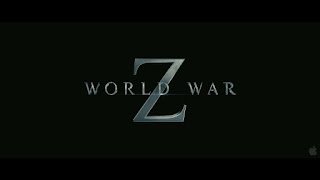 There's already been a lot said about the film adaptation of Max Brooks' celebrated zombie novel, which centred around a series of interviews from around the world, conducted by one man, in which the disparate experiences of survivors were recounted (from the initial outbreak in China to the infamous Battle of Yonkers), and not a lot of what has been said about it thus far has been all that good. 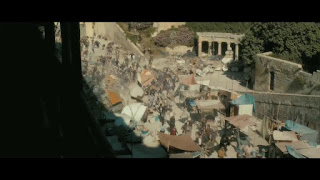 First there was news of the plot getting a total overhaul – yes, it would be difficult to translate a series of interviews into a narrative film, but initial news would suggest there's been large scale changes. Then there was the inevitable news that a costly flick such as this would be, *sigh*, rated PG-13, and then the news that the shambling corpses of the book were getting replaced with runners – and by the looks of the trailers, they're not just runners – the term “zombie tsunami” has been bandied about in comment feeds across the Internet. There was also the news that significant re-shoots were required to re-work the third act – rumours abound that it was tens-of-millions of dollars (some rumours going as high as a surely-implausible $100 million) worth of re-shoots. The suggestion was that they were going far beyond the usual level of re-shoots required for a big budget movie … suffice to say, this sort of news doesn't bode well for fans of the novel.

So let's take a look at the recently released trailer.

Click "READ MORE" for the analysis and a shed load of screenshots...
SCALE: 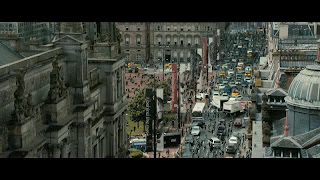 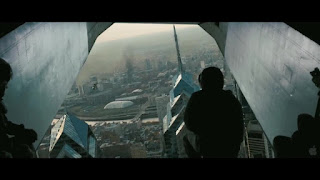 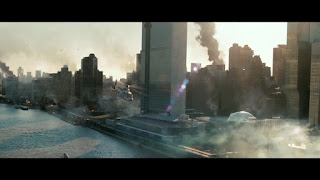 Being that this is directed by Marc Forster, whose Quantum of Solace featured dreadfully over-shaky camera work during action scenes, I do wonder if we'll be getting yet more of that outside of the wide money shots of cityscapes crumbling. I really hope that won't be the case, but the sequence in the traffic jam with the rubbish lorry features the same sort of wobbly camera work that just gets annoying very quickly in most films. 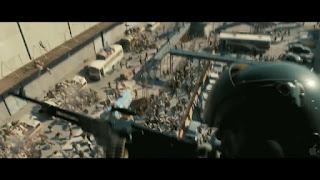 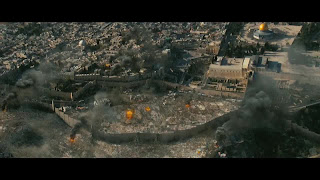 A WORLD CRUMBLES:
Glimpses of the projected losses to mankind on a computer screen, and the military saving artefacts that form the basis of our societies (such as the Constitution of the United States), suggest we'll get plenty of tasty shots of society falling – again, this isn't a hard thing to achieve – such ideas and images are potent and immediately inspire fear, confusion, drama, panic and out-right horror. 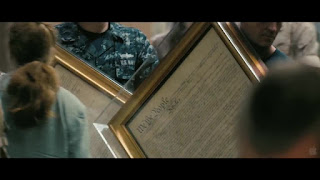 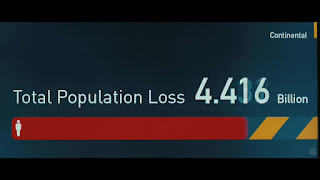 PITT & FAMILY:
As said, the focus of the original novel was never really about the interviewer – rather, the interviewees – and this would be problematic for translating into a film, but the age-old family set-up does feel a bit off-the-shelf in order to inject some personal drama. 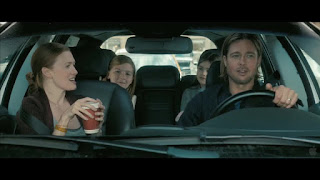 That said, there was a lot of fuss kicked up in some quarters about Brad Pitt starring in the movie – I don't understand the hatred – the man's a very good actor indeed (just look at The Assassination of Jesse James by the Coward Robert Ford … yes, any chance to shoe-horn that flick into a blog post, because it was a bloody good film). Pitt's casting was never a problem for me at all, and I imagine he'll do as good a job as he can with the material to hand which, admittedly, his Plan B production company are producing.

UNDEAD INTENT:
The main cause for concern though is all the changes, as previously mentioned, but perhaps most specifically the total about-face regarding the zombies themselves – the very cause of the collapse of mankind in the novel. Here they unfortunately resemble the pish CGI monsters seen in the Will Smith vehicle I Am Legend – another big budget adaptation that threw the source text straight out the window. IAL was decent for the first half, but as soon as the idiotic CGI beasties reared their ugly heads, the movie itself flew right out the window after the largely ignored Richard Matheson novel. 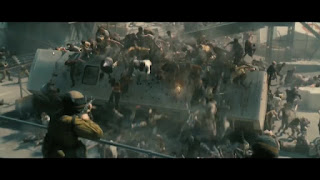 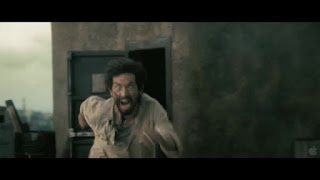 Here the digital effects artists have been working overtime and, by the sounds of it, putting a lot of effort into crafting the modus operandi of their monsters … but from the shots we've seen in this trailer, it's been a completely misguided attempt to 'find something new'. Those behind the effects may believe that zombie fans have 'seen everything before', but that statement illustrates the ignorance at work behind the scenes. AMC's The Walking Dead has shown exactly how fresh new ground can be broken in the zombie genre (thanks to Robert Kirkman's long-running, ground-breaking series of comics), as well as distinctly illustrating exactly how you make shambling zombies work in a post-28 Days Later world. Today, the laziest solution seems to be the preferred path – the fact that the makers of the soul-less Dawn of the Dead 2004 remake thought Danny Boyle's film featured zombies perfectly sums up the laziness that the zombie genre is all-too-often forced to endure by Hollywood – that ill-informed copy-catting has extended to various other zombie-themed projects since (Dead Set and Zombieland being two such examples – despite both projects being very enjoyable in spite of their generally uneducated approach to flesh eating undead ghouls). 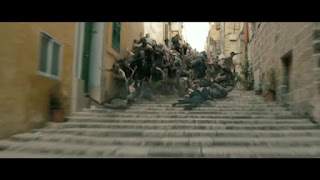 One thing to make clear though, is that 28 Days Later never featured zombies, as confirmed by both Danny Boyle and Alex Garland: the infected are living human beings (who have at no point died and come back from the dead) afflicted with the “Rage Virus” - besides, zombies don't starve to death after a month for crying out loud! 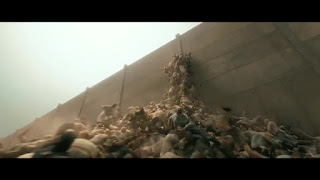 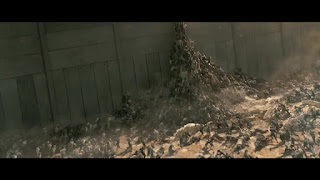 Circling back to the “zombie tsunami” approach, you can't help but cringe at the look of it – these creatures seem to have been gifted with superhuman powers and the ability to form columns/mounds to climb over giant walls … it's hard to know where to start regarding this, so I'll just leave it at my gut reaction – it looks bloody awful, with iffy animation, dodgy CGI texturing, and such an over-powerful enemy would surely render the epic Battle of Yonkers from the novel as a total wipe-out in a couple of minutes.

LAZINESS:
As a particular nitpick in this trailer – where the hell does the rubbish lorry come from? It wipes out the police officer on his motorbike – why did nobody hear it coming, how did it fit down a gap barely big enough for a motorcycle, did it or did it not smash through a dozen other vehicles, and if it did how did it have enough speed and momentum to pull that off (including taking out the police officer at great speed)? See the pictures below. The concern here is that this piece of action smacks of laziness, and it links in with the aforementioned lack of consideration in regards to the zombies – if they can't be bothered to set-up a scene like this in a manner that appropriately makes enough physical sense, what else are they just tossing out there regardless of reason? 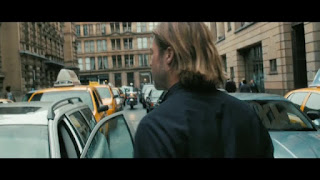 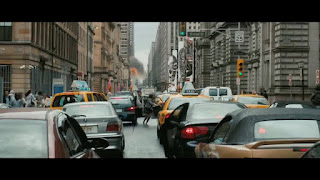 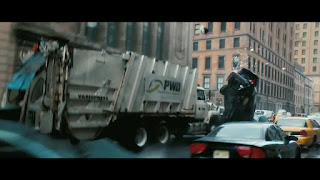 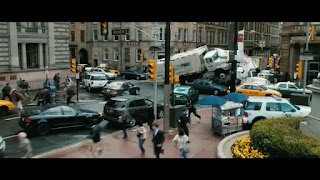 To claim that such things don't matter would in itself illustrate the apparent lack of respect for the genre that this trailer seems to suggest. Small and easy tweaks to that moment would have improved it, and given it a better sense of reality – instead we've got a super-powered dump truck to go along with the super-powered creatures, which we're not really sure if they're zombies or not.

IN SUMMARY:
Will I watch this? Of course I will, but I won't be splashing out good money to see it at the cinema – this has “rental or Sky Movies” written all over it at best. The hope for a respectful translation of Brooks' source material was shot down long ago, along with the hope for proper shambling zombies (as were successfully utilised in the book). While the scale is impressive, that was never going to be a problem for this sort of production, instead it's the apparent disrespect for the zombie genre – or at best, an apparent piss-poor-education in the genre – that flags up the biggest and most persistent worries for fans.

There is little else that can be gleaned from this trailer though, as it's mostly all about introducing a family and a bunch of money shots.

Finally, there's been a lot of negativity surrounding this flick during it's problem-filled journey to the silver screen, but the final judgement can't be passed until it has been viewed – of course – but where there's smoke, you're usually going to find fire. Set nerd-brows to furrowed-with-decided-concern.
Posted by Nick Thomson at 19:59