It's that time of year again – the San Diego Comic-Con is once again under way – and for we fans of AMC's hugely successful hit show The Walking Dead (which returns in October), it means time again for another mouth-watering preview trailer. Check it out here, or if you're not American, then check it out here. 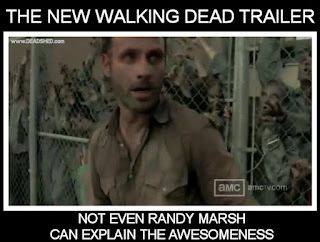 Find more Walking Dead memes HERE.
What's more, these trailers have become synonymous with excellent clip selection and editing – details are kept hidden (their context often tweaked or totally changed), while still giving the fans a big old mouthful to chew on, and the music selection is always pitch-perfect. The trailer for season one featured “The Sun Ain't Gonna Shine Anymore” by The Walker Brothers, while season two's drool-inducing teaser brought Wye Oak's wonderful “Civilian” to our attention, and season three is no different in quality – it features “Black” by Kari Kimmel, which perfectly fits the tone of what we got to see. Read on for analysis and screenshots galore!

N.B. Spoilers for season two of The Walking Dead ahead - but not for season three. All comments are based on what you see in the trailer - if you want to remain completely oblivious to all things season three, don't read on ... otherwise, enjoy! 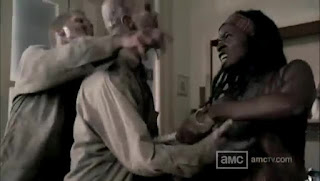 Introduced very briefly in the season two finale, we'll not only finally have a definitive answer as to how to pronounce her name, but we'll get one of the most beloved badasses of the comic on our telly screens. Here (and in a preview clip seen online earlier this week), she clears out a grocery store with her trusty sword in her own inimitable fashion, which includes a double decapitation.

#2: Michonne and Andrea team up: 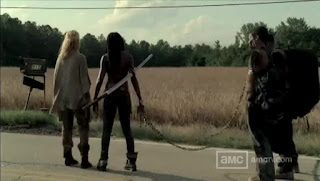 It was fairly clear it would go this way when we were introduced to Michonne in the season two finale (where she saved an exhausted Andrea), but season three's extended trailer provided confirmation that these two death-dealing femmes will join forces. Michonne's already the ultimate bad ass, but at this stage we're still witnessing the evolution of Andrea. In season two she finally found her groove with firearms (so long old life as a Civil Rights Lawyer), and the season two finale also left her abandoned in the wake of the confusion of the incredible attack on Herschel's farm by a herd of walkers – a real trial by fire. Judging by this trailer, Andrea's up for a bloody good fight too, and this looks like it'll be an intriguing change-up when compared to the comics.

#3: Time in the wilderness: 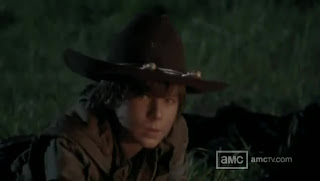 Judging by Carl's shaggy hair, Herschel's beard, and Lori's unmistakable baby bulge, it looks like our band of survivors have been surviving on the road for quite some time. It would appear that the show-makers are seeking to condense time and events a little bit here (the prison storyline was spread out over six volumes of the trade paperbacks), which was further hinted at when we were told that we could be seeing the prison storyline spread across season three and season four.

Click "READ MORE" below for a whole shedload more trailer analysis and screenshots! 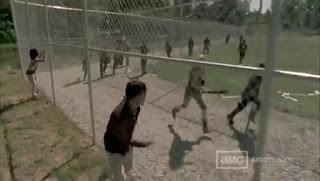 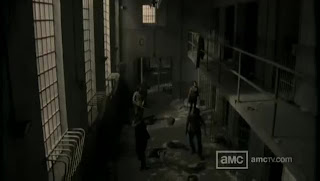 It was the closing shot of season two, which got the fans drooling with anticipation, and we got a good old dose of prison-based action in this trailer. In the comics it was a triple fence, but here it's a more sensible double fence situation – a small tweak, but an interesting one nonetheless, and naturally provides safe passage between a rock and a hard place for our intrepid band of walker bait. 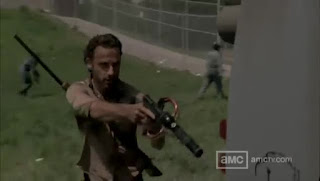 If only Rick had a silencer when he snuffed out Shane, eh? Better late than never – it seems our guys have found themselves some silencers, or perhaps constructed their own (is it just me, or does that look like a torch/flashlight that has been repurposed?). Great for keeping your distance, but without giving yourself away to every walker in the area. From other shots in the trailer, it seems like we'll be seeing more than one of these devices - but how did they find them/fashion them? 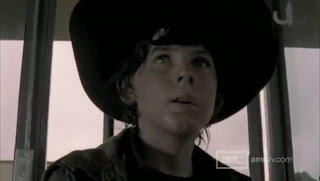 Looking ever-more like his hardened comic book counterpart, Chandler Riggs gets to rock a haggard-yet-cool gun slinger look as he, like-father-like-son, gets to sport a silenced pistol. No doubt in the wake of Dale's death (partly as a result of Carl's own actions), we'll be seeing a more mature Carl in season three. 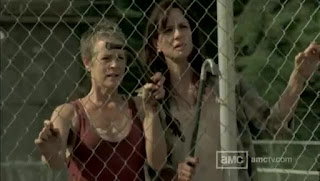 “We're gonna have to go in there – hand-to-hand. This prison is ours.” Taking the prison isn't going to be easy, but it's going to be hell when you can't make much of a noise – crow bars, tire irons, crossbows, bats, you name it and they'll be using it to crush walker skulls till the cows come home. Walker death by stealth - nice. 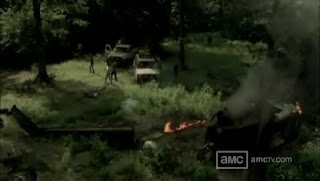 No, it's not the same chopper we saw in episodes 1x01 and 2x13, but here we have a military chopper getting into a spot of bother and crashing in the woods – an event that clearly brings the Michonne/Andrea duo into first contact with David Morrisey's “The Governor” (one of the most iconic characters from the earlier volumes of the comics). 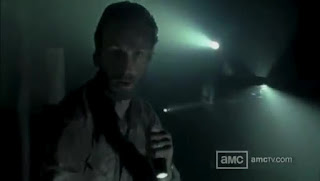 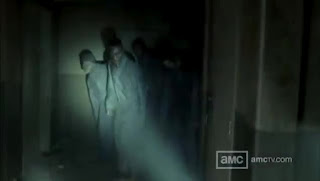 One of the most consistent elements of The Walking Dead is the creation of tension – something which is no easy task, and therefore makes it all the more impressive that these guys manage to create nail-biting tension time-after-time. Here, clearing out pitch-black corridors infested with zombies is going to prove to be a real haunted-house style thrill ride – and what's more – riot gear, something which was put to good use in the comics. 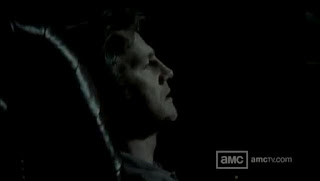 Those familiar with the comics will know all about this guy – one of the most memorable characters from the comics – but I won't seek to spoil anything for those who are unfamiliar with Kirkman's work which the TV show is based on. In this shot however, laid back in his Lay-Z-Boy, I do wonder (and hope) that we see a new use for fish tanks … nudge nudge, wink wink. 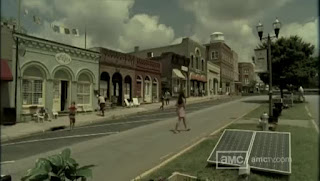 “You're not prisoners here, you're guests – welcome to Woodbury.” It isn't all about surviving off the land in small groups, exposed to the elements and all the different varieties of danger, no – there are larger and more organised groups out there, such as the town of Woodbury. Retrofitted with solar panels and large barricades manned by armed guards, will it be a case of too-good-to-be-true for Andrea and Michonne? Having our two deadly ladies turn up at this location first - and totally separated from the rest of the main group - is a one of a handful of noticeable changes to the pacing of the unfolding story. 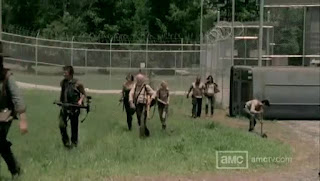 A turned-over prison bus to try and block the main gate? Interesting. Also – further evidence, albeit brief when watching the trailer, that Lori's baby bump is coming along nicely. 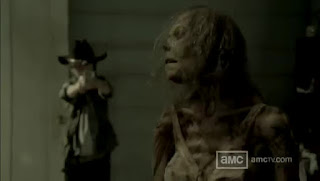 Gregg Nicotero teased us last week that we'd be seeing more animatronic zombies on the show – really emaciated articles – and I for one, am overjoyed. I love classic practical effects (which KNB have consistently rocked to great effect on this show), and there's something special about these wonderfully crafted puppets that are operated by several crew members. They look so damn creepy! 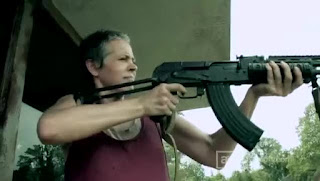 Hardened after the loss of her daughter Sophia at the mid-point of season two, it's good to see Carol gets to throw some lead about. Here she's providing cover for her cohorts from one of the prison's watch towers, which will surely get plenty of use in the coming season. 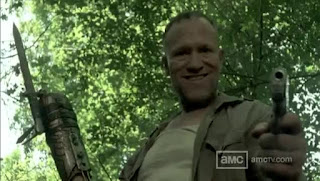 “Now, how's about a big hug for your old pal, Merle?” Season two also featured Merle – in a single episode, in which he was merely a figment of Daryl's delirium (that Merle still had both his hands). It would appear that Merle is now a part of The Governor's crew – and sporting a supremely cool stump-cover with special knife attachment. Will we have a showdown between Merle and his brother Daryl? Who exactly is Merle talking to? Will he try and exact revenge on Rick and the gang?

Other things to note from the trailer include:

“You're not a killer, and I know that.” - In the season two finale, Rick revealed to the whole group that he had to kill Shane (much to Lori's shock and initial disgust, as she realised she was somewhat to blame for the sacrifice), and clearly this revelation will continue to haunt the group dynamic – the so-called “Ricktatorship”. One of the main themes in Kirkman's The Walking Dead is how your humanity suffers at the hands of necessity in this harsh new world. A price must always be paid when extreme action has to be taken (often once you've been pushed into a corner), and naturally this will affect how those around you perceive you.

“All we do is run.” - Maggie's long-since got together with Glenn, and clearly she's tired of running, much like her comic-book counterpart. The prison represents safety, shelter, supplies, and the possibility of a real life in this world of the undead.

“We're going out there and taking back what's ours.” / “I'm not giving up this prison, we took it, it's ours, we spilled blood.” - The Governor wants to take things back, but what specifically? He might be speaking more generally, but obviously he's including the prison in his statement. Rick, T-Dog, and Daryl have a meet-and-greet with The Governor and not only stake their claim (another recurring theme in the comics), but reveal that they have shed blood in the process – whose blood might that be? Will we have a season opening sacrifice? Prepare to be shocked, perhaps.

“Who the hell are you?” - so speaketh Daryl, lord of the crossbow. Who is it? My money is on the prison not being solely populated by walkers.

Fight the dead, fear the living – the season tag line certainly fits in with the strongest and most persistent themes of Kirkman's celebrated work. We got a taste of the danger represented by fellow humans in the latter-half of season two, but it's looking like season three is going to make those encounters look like a cake-walk.
Posted by Nick Thomson at 17:54