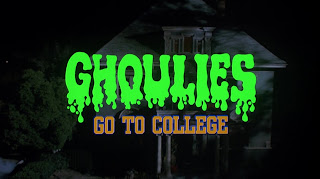 “Smells like something screwy is going on.” Those pesky l'il demons are at it again, seeking to further their education by cranking the potty-minded hijinks up to eleven with death-by-plunger, and an ornate porcelain throne acting as a flushing portal to Hell... 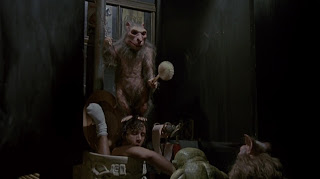 “I can't see a future with a guy whose sole goal is to become Crown Prince of Pranks.” Glazier College, a home for mind expansion and higher learning during most of the year, but this week it's the annual 'prank week', with rival fraternities Beta Theta Zeta and the Gammas going to grander and greater lengths to secure the coveted prank crown. Handsome prank superstar Skip (Evan MacKenzie, Scanner Cop II) is in his final year of college and has one last chance to wrest the crown from the blonde-haired and blue-eyed clutches of Gamma frat douche nozzle Heilman (John R. Johnston), but all these spring-loaded park benches, catapulted water balloons, goofy glue guns, and remote-controlled desk demolitions are driving a wedge between Skip and his gal Erin (Eva LaRue, RoboCop 3), pushing her towards the supposedly more mature Heilman, a master of sneaky misdirection and blame-shifting – and Skip's unfortunate talent for getting caught in flagrante certainly ain't helping. 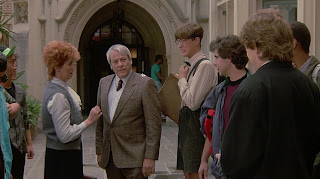 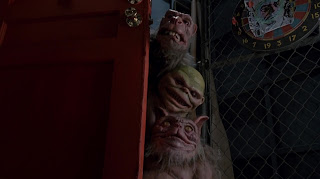 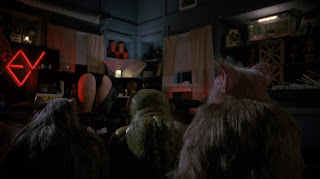 “You know, tossing the TP in a tree, bombing with the butt wipe bouquet?” Caught in the crossfire is Humanities Professor and Dean of Students Quentin Ragnarok (Kevin McCarthy, Innerspace), this film's answer to Animal House's Dean Wormer, a man who has not one glimmer of affection for jokes, japes, jests, or any other form of jocularity. Fatefully, thanks to the misplaced foot of BTZ frat boy Wes (Billy Morrissette) dislodging a tile while sat upon a peculiarly carved toilet, a copy of an underground comic book called Ghoulish Tales is exposed once more to daylight. Translated from an ancient book of demonic rituals, Ragnarok unwittingly conjures Hell's very own version of The Three Stooges from the burbling green waters contained within the dookie-dusted porcelain portal! 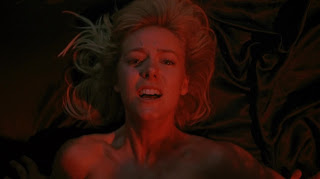 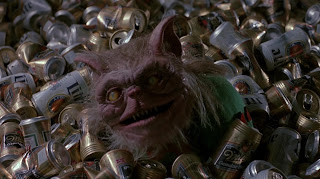 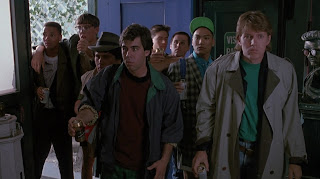 “A yank is a yank is a yank, but gentlemen – this is war.” Now given voices, the three ghoulies have once again been re-designed, this time by Director John Carl Buechler's (Friday the 13th Part VII) effects team, who have increased their size to facilitate more dextrous puppetry. With the fish-monster-like ghoulie, the poster boy for the franchise, acting as the leader with a penchant for clunking his buddies' heads together, the terrible trio of diminutive Devil-spawn quickly set about indulging in a cavalcade of collegiate chaos. Having spied on energetic boudoir frolicking, and flushing a frat boy down the crapper (after whacking him in the balls with a bog brush), the ghoulies discover the BTZ stash of beer, encased in a truly monolithic refrigerator, and chug the lot – and these thirsty buggers are only just getting started. 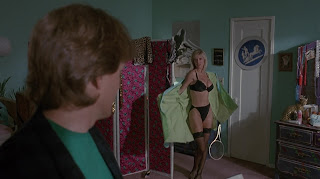 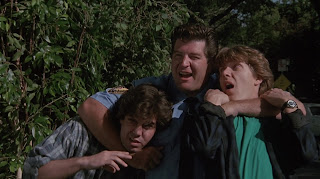 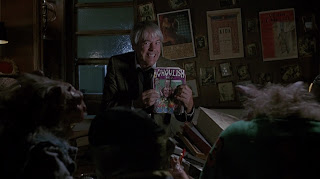 “Officer Barcus, what brings you here?” / “In a word, your panties.” / “Sorry, they're being used.” Written by Brent Olson and planting its feet firmly in comedy, Ghoulies III: Ghoulies Go To College is arguably the most entertaining of the four films, dispatching any ounce of seriousness that the first two films might have contained in favour of Looney Tunes style violence, an assortment of gut rifts and bottom burps and, of course, a panty raid with topless pillow fight counter-attack. It's not just the BTZ boys getting in on the knicker-knicking, either, as the ghoulies – clumsily dressed as luminously fashionable college dude bros – get in on the action as well, quarrelling over silky underclothes. 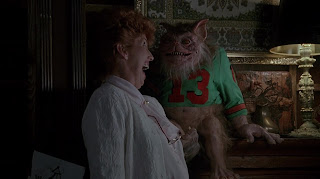 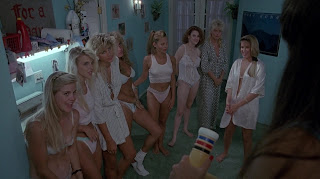 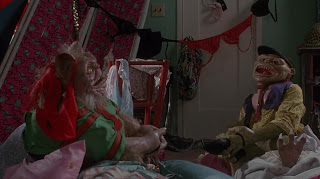 “What did you do to the bodacious babe?” The film is a barrel of monkeys, Hell-bent on having as much fun as possible, and that clearly translated to the actors as well. There's the gleeful scenery gobbling of a wild-eyed and gurning Kevin McCarthy, world famous for his leading role in 1956's Invasion Of The Body Snatchers, who relishes every moment of screen time, especially when he's interacting with his ghoulie minions. When catching them snarkily repeating his words back to him, it's all McCarthy can do to not burst into fits of giggles when he challenges them with the line “The Ghoulies have no dicks!” In addition to his endlessly entertaining scene stealing, there is Hope Marie Carlton as Wes' girlfriend Veronica, a voraciously indefatigable sex pot whose orgasmic exploits involve, among other gym equipment, a treadmill! Possibly most widely known for the films she made with Andy Sidaris – Hard Ticket To Hawaii (1987), Picasso Trigger (1988), and Savage Beach (1989) where she played a fun-lovin' ass-kicker alongside L.E.T.H.A.L. Ladies legend Dona Speir – Carlton brings boatloads of spunky fun, oodles of charm, and a considerable injection of sex appeal to the flick. 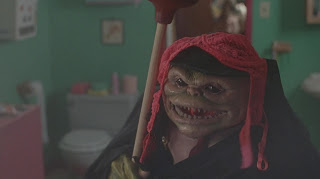 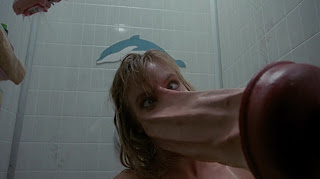 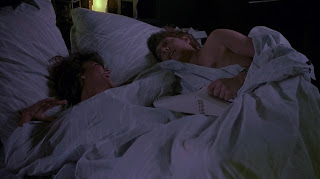 “Ooh! Right in the ball park!” In addition to the aforementioned cast, the rest includes a veritable laundry list of pop culture connections, cementing Ghoulies III as a solid stepping stone in a game of 'Six Degrees'. Patrick Labyorteaux (Heathers) appears as Skip's BFF Mookey, while there is also Jason Scott Lee (Back To The Future Part II) as hi-fi obsessive Kyle, Griffin O'Neal (April Fool's Day) as Blane, Sherrie Wills (Exorcist III) as serious sorority sister Buffy, Matthew Lillard (Scream) as Stork, and Marcia Wallace (the voice of Edna Krabappel in The Simpsons) as the tongue-tied Miss Boggs. 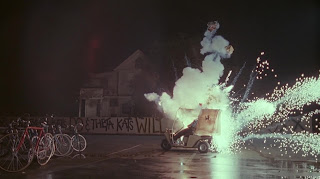 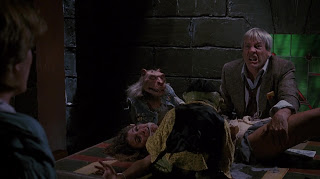 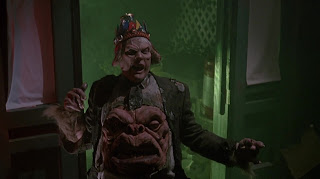 “What a foul smelling bag of puke.” Leaning heavily into the comedy direction, Ghoulies III is generally low on kills and gore, not that the previous entries were slaughterhouse affairs, but ramps up the T&A and the unbridled silliness. Campus Security cop Officer Barcus (Stephen Lee, RoboCop 2) certainly gets his fair share of yucks, from coveting his electric buggy 'Bonnie' to nervously explaining away his panty fetish: Doctor's orders, he claims, because of his sensitive skin! It might not have as much bite as the slightly more horror-themed Ghoulies II, but Ghoulies Go To College is an absolute blast – where else will you get to see Kane Hodder riding along in an out-of-control mop bucket?