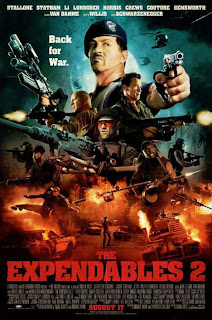 What's it about?
Head-crushing sequel to 2010's muscles-n-guns festival-of-awesome The Expendables, which gathered practically every big name in action cinema under one tent pole extravaganza of explosions and flying lead. This time around, Jean Claude Van Damme's "Vilain" (with Scott Adkins in-tow) wants to get his hands on multiple tonnes of previously-hidden uranium to sell to the highest bidder - naturally, our band of gun-toting heroes must save the day, with punching, kicking, and just a little bit of shooting and blowing shit up.
Who would I recognise in it?
Sylvester Stallone, Jason Statham, Bruce Willis, Arnold Schwarzenegger, Jean-Claude Van Damme, Dolph Lundgren, Jet Li, Terry Crews, Randy Couture, Scott Adkins, Chuck Norris, Liam Hemsworth, Charisma Carpenter.

Click "READ MORE" below for the full skinny on Stallone & Co's latest action-fest...

Great/Good/Alright/Shite?
This time out Stallone hands over the Director's chair to Con Air's Simon West, and with a boosted budget, this sequel not only brings the booms with extra-gusto, but it has a better sense of pacing. The first flick had a slightly awkward structure to it, probably owing to spending the most money on the fantastic third act where the action was really unleashed, however there's no such issue with this follow-up. An opening raid on a Nepalese military compound proves to be one of the biggest highlights of the film (if not the highlight) which mixes brawn with a knowing sense of fun. Brutish assault vehicles are adorned with sly proclamations of impending pain for the bad guys, while chuckles accompany fresh-feeling battles (see Jet Li taking out a kitchen-full of baddies with a frying pan, a ballet of violence that almost feels like a musical number). Suffice to say, with deafening gunfire and bravado-fuelled music filling the soundtrack, with a daring river-bound escape afterwards, the opening sequence makes a statement about how the flick aims to proceed - with little time for relaxation as every action movie possibility is flung at the screen with gleeful abandon.

This isn't to say it's nothing but action - indeed, building on the first film's succinct characterisation, we keep the nice moments of interaction between these action heavy-weights (particularly Stallone and Statham). However, with so many big names, some of them are going to be left somewhat sidelined at times. Jet Li vanishes from the movie early on, but Dolph Lundgren gets much more playtime here. Indeed, Willis and Schwarzenegger (who previously only had cameos in the first flick) get to blast away dozens of baddies side-by-side, flinging each other's catchphrases at one another with knowing smirks. That said, Couture and Crews can, at certain points, become a bit absent when the chaos hits the screen, but even still everyone is afforded an opportunity to shine at some point, with brief-but-enjoyable shavings of their respective personalities drip-fed throughout. Also getting the chance to show off is new-comer Liam Hemsworth as Billy The Kid, a masterful sniper who represents who the old guard were before they opted to remain in the mercenary game for life.

The Expendables 2 is a movie that knows exactly what its audience wants. Catch phrases and nods to the audience are dispensed frequently with varying degrees of success: while Terry Crews' warning to Arnie feels a bit forced, a joke regarding Chuck Norris goes down brilliantly with an audience. Furthermore, Arnie gets to fulfil his famous proclamation, Van Damme gets to do his signature move several times, Statham gets a nail-biting battle with Scott Adkins, and Stallone dishes out punishing levels of ear-pounding pain as he takes on practically everyone in a manner that belies his advancing years.

Sure, the plot is simple - Van Damme's theatrical big bad wants to get his mits on a shedload of uranium to sell to the highest bidder, and so Stallone et al must blow up half of Europe to stop him - but if you're coming to this sort of a movie expecting subtle character shading and introspection, then you're a strange individual. What does the audience want from this flick? They want hardcore action, big personalities on-screen, and a relentless pace - rest assured, the audience receives exactly what it wants in spades. Everything that worked in The Expendables returns, and is notched-up to eleven, while most of the few foibles the original possessed have been improved upon. Everything you can shoot a gun at, is shot at, everything you can blow up, is exploded, every knowing-wink to the audience, is seized upon. It's big, burly fun. In terms of movies in general, it's good, but in terms of action flicks, it's great.

Now to ponder who we'd all like to see in The Expendables 3 ... I for one would love to see Michael Biehn get in on the act.
Posted by Nick Thomson at 17:41