Remakes are a funny old game, as I've remarked before, most recently when stating that a flick which would make for a good remake is Drive-In Massacre. One of the biggest problems with remakes that I find, however, is that they can never live up to the vibe that the original exudes. The scope of the remake is far larger, the production design is through-the-roof comparatively, and in-place of discovering a long-established classic during your formative years with fellow-minded classmates, you've got the big marketing push with the inevitable appearance at a Comic-Con. 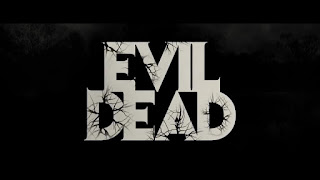 This brings me to the 2013 remake of The Evil Dead – as first shown to us at the 2012 New York Comic-Con – and it has my fanboy mind all over the place. I'm a huge admirer of the original movie (which I first saw aged 14 after buying a VHS copy – which was at the time still severely cut by the BBFC – from my local post office), so the first mention a while back of the film being remade, sent we horror fans into a right old tizzy. The announcement that Diablo Cody would be heading up screenwriting duties was controversial enough in itself, but on the other hand – under the banner of Ghost House Pictures – the original creators of the The Evil Dead were actively involved, and had picked an unknown (Fede Alvarez) for directing duties (an offer that no sane aspiring filmmaker would turn down).

Click “READ MORE” below for a slew of screenshots and responses...


SCALE: The original was a modest indie flick funded by a collective of Dentists and other local businessmen. The remake was always going to have a bigger budget ($14 million according to IMDb) and a grander scale – but I always loved the small-scale, do-it-yourself, down-and-dirty vibe of the 1981 original. 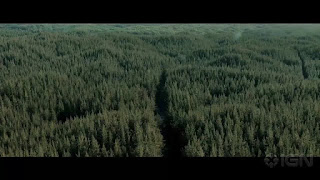 THE CABIN: Re-creating the infamous cabin in the woods is, relatively speaking, a straight-forward task. Single level, two windows with a door in the middle, and a swing bench on the right-hand-side – simple. You can't go far wrong in this regard. 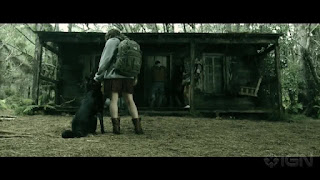 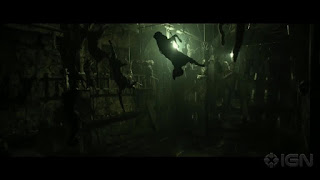 That said, we circle back to the increased budget and scope afforded to remakes (cash and resources the originals pined for, but triumphed without due to hard graft, creative solutions, and a trade-in for authentic grittiness). The basement is no longer that of Rob Tapert's family, it's now a far more generous set. Increased budget and scale does provide you with many more opportunities, but it can also alienate fans who have the modest blood of the original coursing through their veins. 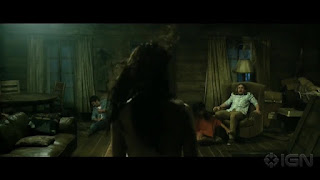 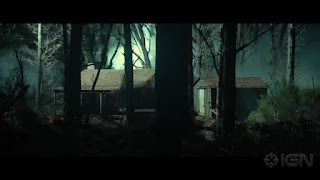 In a brief glimpse of the interior of the cabin, with wind blowing about, I got a snifter of an Evil Dead 2 vibe ... shame about the gear-crunchingly deadpan delivery of "You're all going to die tonight". Moving outside, the exterior layout is also all there, work shed included. 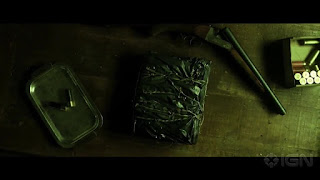 FAMILIARITY: Key images from the original are all present and correct – the shotgun (albeit a sawn-off here) – the Book of the Dead (teasingly wrapped in black plastic and barbed wire – a caution-filled warning that I quite like) – the time-halting clock – the presence in the woods (looking slicker, but that ingenious sense of simple solutions for effective visuals so frequently witnessed on Raimi's flick, feels removed here) – and even “The Classic”, as Sam Raimi fondly considers his famous Oldsmobile to be, makes an appearance. 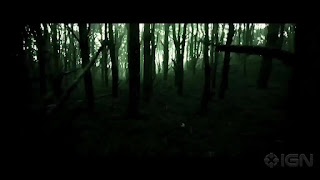 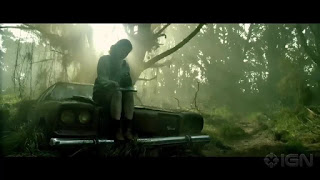 Oh and those perverted old trees seem to be back. 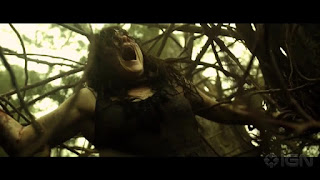 TWEAKS: Changing iconic images can be tricky – you don't want to cherry-pick and stick rigidly to a well-worn path (such as the catastrophically bad 2010 remake of A Nightmare On Elm Street), but equally you don't want to ditch must-have moments and sights – the re-design of the Necronomicon (seemingly flesh stitched together to resemble a best-seller as designed by Leatherface) could prove controversial to the most-feverish of the die-hard audience. My opinion is split on this one, but on the other hand, this in itself isn't enough to get your panties in a bunch over. 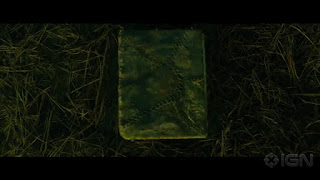 Rather than a bridge high-over a river, a flood cuts off the merry band of young folk from the sanctuary of the mainland here. I don't think anyone can get too uppity about this tweak. 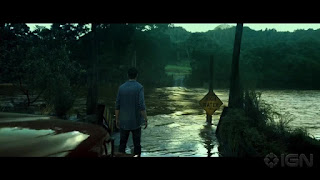 One tweak I'm really not keen on however, is the look of the possessions themselves. The sheer-white of the eyes in the original bore witness to the captured being having their soul removed entirely – those white voids staring back at us were an abyss – and that's not-to-mention their grisly, gnarled and decayed flesh. The remake on the other hand seems to contain the descendants of The Exorcist … I'm not keen on this look at all. In the original they really did look, and feel, inhuman – here they just look like someone has watched Zack Snyder's soul-less remake of Dawn of the Dead (2004) too many times. 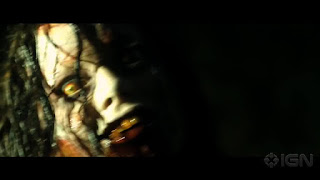 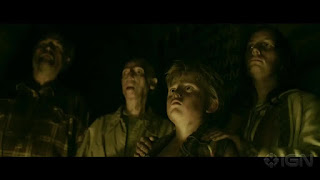 Finally, who is this collection of weird-looking, grubby-faced people? A brief encounter with warped locals? A vision of horror? Hmmm...

GORE: The 1981 original wasn't lacking in any way when it came to gore. Genre fans have been thrilled by its hand-built indie look which unleashed a torrent of horrific images – decapitations, gnawed wrists, stabbed ankles, severed limbs still jiggling with life on a blood-soaked floor, and so on – and by the looks of things, the 2013 remake doesn't skimp on grue. 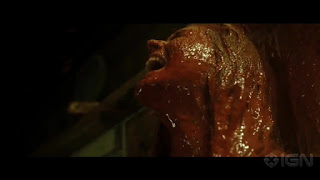 Bruce Campbell has said that they fully expect to bump-heads with the MPAA (I can already smell an “unrated” DVD/Blu-Ray release coming on) – torn cheeks, sawn-off possessed limbs, bisected tongues, gallons of gushing gore, angered use of a chainsaw - it ain't subtle, that's for sure. Nor should it be. 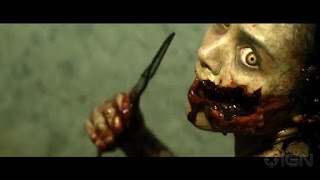 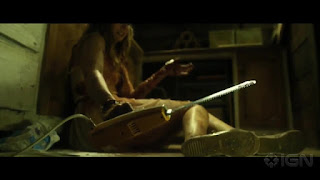 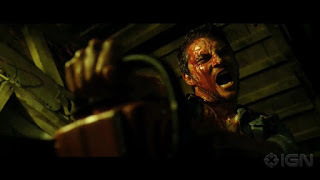 However, this is also an area for concern to me – the coverage at, and since, the New York Comic-Con seems to focus a lot on the gore. It was an important component of the original, yes, but in combination with the bravado and ingenuity of a truly-original vision of a new take on horror (“the ultimate experience in gruelling terror” as video covers the world over proudly boasted). Fears that it just becomes a blood bath could be legitimate. While the characterisation was fairly skimpy in Raimi's flick, the shared-experience of the actors living and working in that environment shone through to generate a genuine sense of friendship that is hard to manually create – how it all works, particularly Cody's script, remains to be seen. Baited, tense breaths all round, then. 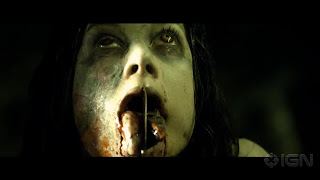 OPINION: Remakes are inherently problematic. Yes, they make business sense, but they do prey on the insatiable curiosity of the horror community – even crappy remakes make money simply because the fanbase for the original is overcome with intrigue. Will it be a worthwhile endeavour that might come close to equalling (but never bettering) the original, or will I have ammo with which to denounce this disrespectful cash-in? Such is the catch-22 for horror fans – with-hold your cash and suffer the curiosity, or pay-up and cross your fingers for a movie-with-merit in a genre swamped by dreck, but risk financially supporting a kick to the fan-balls?

There is no doubt that I will watch the remake – the involvement of Raimi, Tapert, and Campbell alone has secured that – but the aforementioned dilemma remains. The Hills Have Eyes 2006 and The Crazies 2010 both, incredibly, proved to be equal to their originals – will the re-do of The Evil Dead achieve the near-impossible and join them, or will it prove to be a soul-less, overly-slick, re-heat that's short on fresh ideas, which is so often the disappointing end-result of remaking a cinematic icon?

The fanboy inside me was incensed at the news of a remake upon first hearing it, and I am still to-this-day extremely suspicious. Yes, a remake doesn't erase the original from existence, but it does become a part of the franchise's legacy and can often usurp the original entirely when it comes to ill-informed movie-watchers. A stinker of a remake can easily leave an “oh yeah, and then that happened” fug of disappointment. 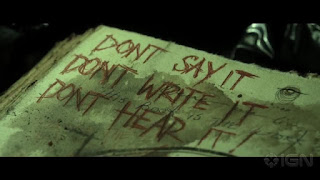 I do love a good dose of splatter befalling a group of good-looking young folk in the woods, but I need something else to go along with it. I've already spoken of the wider reasons why I adore the original flick, and why the remake could very well fail to capture the same vibe – that of an intrepid band of entirely unknown filmmakers venturing out into the woods with a camera, a dilapidated old cabin (that they themselves renovated with their bare hands), a handful of cast and crew, and a few buckets of blood. That merry band was Raimi, Tapert, Campbell & Co, and they created a cinematic milestone that redefined the horror genre – a film that was deemed to be the “Number One Video Nasty”, which nevertheless went on to inspire filmmakers forever after. It would not be over-egging it to state that The Evil Dead is a cultural landmark – a mass of films, music, books, art and more, has been generated in its wake. Modern remakes never possess that power – and that's the biggest fear, and largest pitfall, when being confronted by one.

The verdict won't be in until I've seen it for myself, so we'll have to see, but let's be brutally honest here, the original will always be the King, baby.