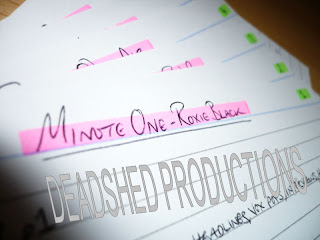 I'm on a bit of a roll at the moment. "Cold Shadows" came together surprisingly quickly in the writing process, and I'm very pleased with the first draft - so pleased that there's only a few minor tweaks planned for it, once I've bashed out the first draft of my next script, titled "Sleb", that is.

Click "READ MORE" below for more information on "Sleb"...

"Sleb" will be a one-off television comedy/drama with a jet black sardonic tone. I'm aiming for 60 pages and today I finished laying out the script on record cards (a method that I've really come to love since first trying it on the first draft of "Eyes In Your Window" back in October).

The central character is called 'Roxie Black' and she is consumed by the world of celebrity.

I'll talk some more about it in due course, but I'm very pleased indeed with how the ideas for this script have been coming together. The first spark was a few days in to writing "Cold Shadows" - the basic idea, and then the title hit me - and then a few snippets of scenes ... and all of this as I'm writing the first draft of another script entirely. As I said above, writing that first draft of "Cold Shadows" went really well, but it also went surprisingly quickly, and so for the last couple of weeks I've been beavering away grand style to get "Sleb" all planned out. I'm very close to putting fingers-to-keyboard - there was so many things I could do with this script, that I was spoiled for choice. I picked the best ideas, dreamt up my "must have moments" that defined several scenes, and then - much to my surprise and pleasure - the jigsaw pieces all fell rapidly into place. Context was driving creation. 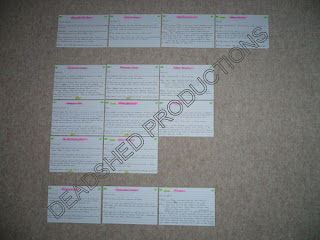 In the past it has taken me a fair bit longer to get my ideas down - but I guess this is all part and parcel of the hours I've put in, improving my screenwriting skills. For example, "Allen Bridge" took a long time to plan (more than a year in fits and starts) and was written somewhat hap-hazardly over months. Fast forward the best part of two years - and a handful of scripts and fresh drafts later - and "Sleb" has come together as a fully fleshed-out idea in two weeks. Like anyone who writes, I've battled procrastination, writer's block, and disaffecting malaise, but it seems that I've successfully been working out the muscles of my brain (if you will). The lesson is - as is always the case - practice, practice, practice. Put in the hours and improved results will show.

Wrestle against rejection, shrug off the lure of procrastination, learn to be your own harshest critic, gnash your teeth, bloody your mind, set yourself creative challenges, explore different territories, and let your fingers roam free across the keyboard.

Yeah - I'm pretty excited about "Sleb" - I feel I'm onto something really strong here.
Posted by Nick Thomson at 19:51