Issue 2 of Sleaze Fiend Magazine - an independent zine written by fans, for fans, covering all things to do with exploitation cinema - has arrived and is now available to buy. 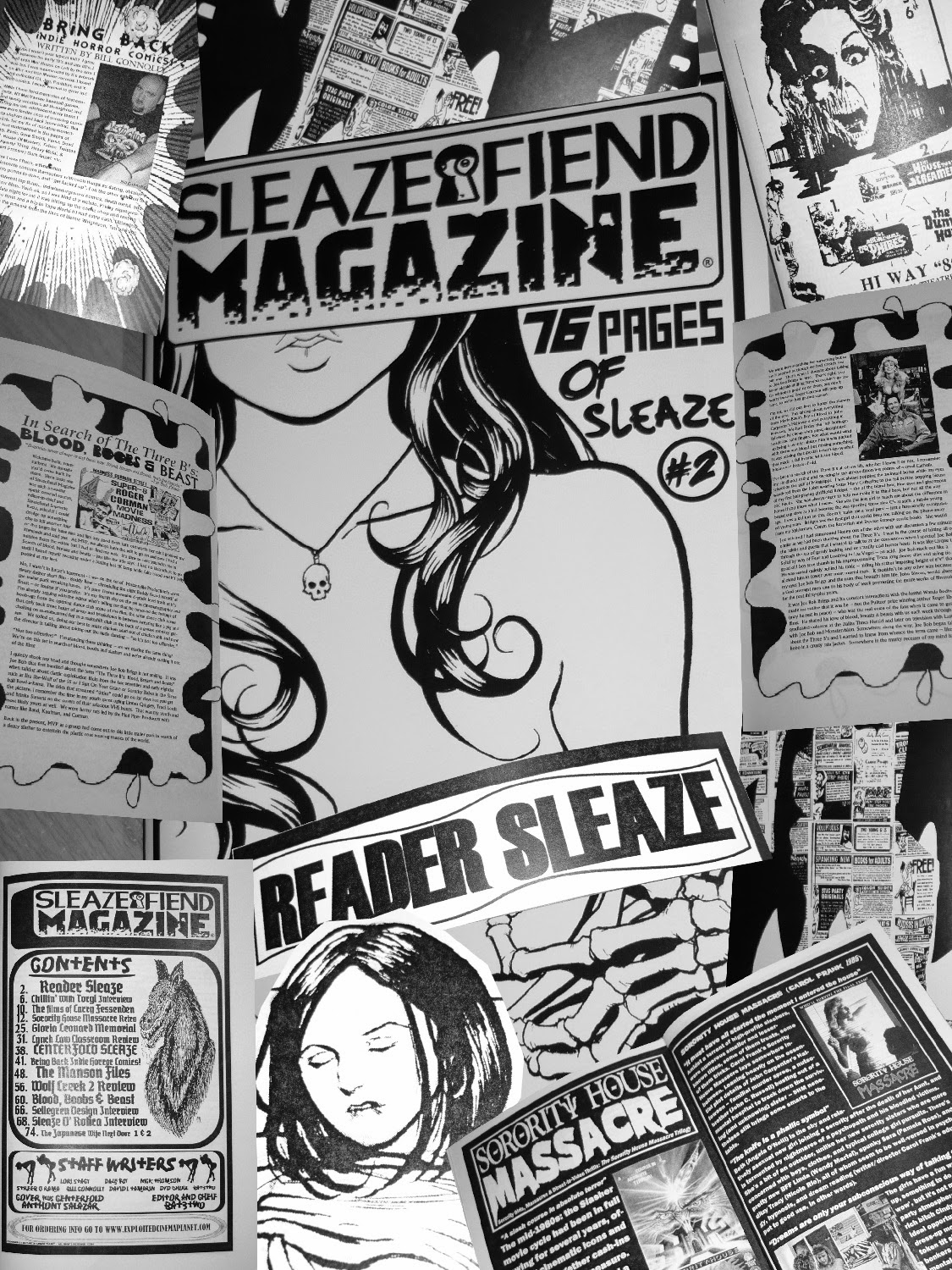 I'm one of the staff writers on this publication which is run by Bat32 (I contributed a review of Strip Nude For Your Killer for Issue 1, and wrote one of the main articles for Issue 2), and below you'll find my take on this second outing for SFM.

Click "READ MORE" below to get a glimpse inside...

Personally speaking, my highlights were "Reader Sleaze" (by Dale Roy/Newt Cox) - a nostalgic segment that concerns readers' discovery of mucky movies - "Bring Back Indie Horror Comics" (by Bill Connolly) - an informative and personal tour through the eye-opening sights of 1990s horror comics - "In Search of The Three B's: Blood, Boobs, and Beast" (by Streeb O'Rama) - an irreverent and entertaining examination of the key ingredients in Roger Corman's films as identified by Joe Bob Briggs - as well as interviews with Mark Torgl (of The Toxic Avenger), artist Magnus Sellergren, and photographer Yan McLine.

The magazine - illustrated with frequently raunchy stills, film posters, lobby cards, and original artwork that'll surely raise your eyebrows - builds upon the successes of the first issue and makes a few tweaks. Overall the presentation is tidier, more refined, although a couple of the reviews/articles could use some work. In the latter case it's an issue of sentence structure, grammar, and the organisation of the individual writer's thoughts on the page so things might flow better. However, like I said, this is only in a couple of instances.

There are articles on the films of Larry Fessenden (by Phill Swanson), the late adult film actress Gloria Leonard (by Lori Stacy), a second edition of The Manson Files (by Bat32) detailing the infamous cult leader's connection to the music industry, as well as my own piece - a review retrospective of the Sorority House Massacre trilogy.

At times some of the reviews are written in such a way that the reviewer is in-the-know on an obscure film, but the reader might remain a little lost as to what the film being assessed is about. In some ways these movies are often so delirious that it can be hard to boil them down to a one page review, but a little restructuring to guide unfamiliar readers more clearly through the essentials of the plot - as well as key scenes - would be welcome. Again, this is only applicable to a few reviews.

Sleaze Fiend is very much a product of passion and individual tastes, it's an independent production - put out there by lovers of strange cinematic sins - so part of the pleasure is watching it grow and how the contributors develop their craft. It explores the peripheries of genre entertainment, the sort of niche market stuff that can simultaneously inspire glee and shock, all things crazed and bizarre - that's what you'll find within the pages of SFM.

Obviously it should go without saying, but what you'll find inside isn't for sensitive souls or the easily offended, but fans of genre and exploitation cinema can expect a mix of the familiar and the fantastic, the unknown and the jaw-dropping.

To find out more information, including how to order your own copy, visit www.exploitedcinemaplanet.com