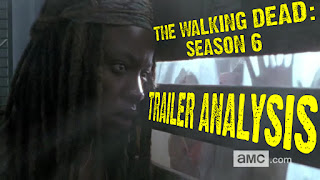 “We both started out in the same place … you can come back from this, I know you can” says Rick, but who is he talking to? Is it Morgan? It likely is, but what could Rick be referring to? Has Morgan done something terribly wrong between when we last saw him in Season 3 and now? “Good people, they always die – I'm a killer, Rick, and you are too,” responds Morgan, supporting Rick's view that you shouldn't take chances – but does this have a loaded meaning? Is Morgan unsure of Rick's intentions – his sanity, even – after the close of Season 5 which saw Rick kill an enraged and beaten Pete right in front of Morgan?

“You get out of here and you don't ever come back,” says Morgan in another part of the trailer, at which point we cut to Rick. Clearly the folks behind The Walking Dead want to give us an idea of Morgan and Rick being potential enemies in Season 6, or at the very least two sides of a contentious argument. The editors of these trailers are notoriously tricksy, and when you look closely you see numerous instances where two different scenes have been stitched together to seemingly form one scene. There will surely be a clash between the two men – but will it be quite as angry as the trailer suggests? Could it even be a double bluff?

Click "READ MORE" below to continue this analysis of the Comic-Con trailer for The Walking Dead Season 6...

“Do you have any idea who you're talking to?” Once again, and with Rick angrily pointing his gun at someone down on the floor inside one of the homes of Alexandria (scuffle implied), his desperation seems clear. He wants the members of Team Rick to stay in this safe haven and won't have anyone casting him or them out – this was a possibility near the end of Season 5 (a meeting was taking place before it was interrupted by an attack that killed Deanna's husband Reg). However, again we see the tricksy editors at work – the same scene of Rick angrily pointing his gun is used twice, seemingly in two contexts, but the image is reversed (the cuts on Rick's face swap sides) in one instance to help suggest that an edit from Rick to Morgan means the gun is being pointed at Morgan – however, I'd safely wager that these shots are from two very different scenes. Whoever Rick is pointing the gun at, I don't think it'll be Morgan (for one thing, the eye lines don't match).

There also seems to be suggestions that it's not just Morgan who Rick will be butting heads with. “You feel differently about it?” asks Rick, “Yeah I do” responds Daryl. We've gradually seen everyone's favourite squirrel-hunter elevate himself to his own version of leadership, willing to challenge Rick (such as in episode 5x08). However, Carol appears to be the 'Vicetator' in the Ricktatorship: “She's in charge,” she says, seemingly referring to Deanna, “but you're in charge now,” seemingly addressing Rick out in the wilds beyond the walls.

“They haven't had to survive … they just don't get it. I don't take chances any more.” Is the Ricktatorship back? Clearly Rick continues to be unimpressed by the ignorance and weaknesses of the Alexandrians, and this will likely make up a considerable amount of story for the next season. The Comic-Con poster, and this trailer, seem to suggest that Gabriel will swap allegiances to join Deanna (although let's be honest, he was barely a member of Team Rick in the first place). 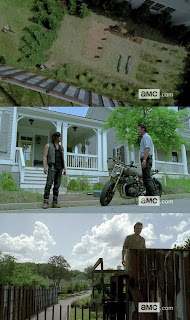 However, she also says at one point “He's been out there, he's faced it. We are going to trust him. All of us.” Who is she referred to? Rick or Morgan? Could she be referring to Gabriel? Is she hedging her bets, maybe even playing Rick and Morgan against one another? Could she be trying to figure out which one of the men she prefers as an effective leader experienced in the world beyond the gates of Alexandria? This all said, she did tell Rick to “Do it” – by which she meant 'kill Pete' (being that Pete killed her husband Reg).

Furthermore there seems to be a general schism between Team Rick and the Alexandrians. “So we're all just supposed to fall in line behind you,” says a new face to the cast, seemingly challenging the supposed authority of outsider Rick. Indeed, there's a town meeting afoot – suggesting lots of new faces to act as juicy fodder for the walkers. Jessie’s teenage son Ron also seems to not be a fan of Rick (well, he did kill his father!) calling our hero “dangerous”. Further to that, Rick's eagerness to lead seems to be at odds with the abilities of the Alexandrians – “We're doing this now!” screams Rick, “We're not ready!” comes the desperate reply from Ethan Embry’s character before things start getting out of hand. 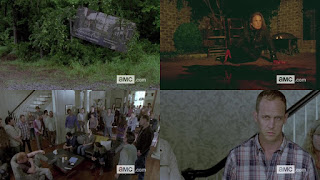 The height of this Alexandrians vs Rick angle seems to come with a conversation between Morgan and Deanna in which he says “I know Rick, I can stop him, we have to.” However, given a second listen, you can clearly hear that the word “Rick” is taken from another scene entirely – the inflection doesn't match the rest of the sentence. Oh, those crafty editors have been at it again! 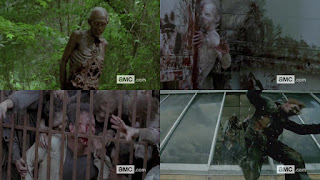 Things seem pretty bleak in Alexandria – “How many more of us have to die before we do something?” – what with a burgeoning cemetery and herd of walkers heading their way. It seems that Rick attempts to draw them away with an RV (with orange balloons tied to it), but might get stuck in a bit of a jam – we see him desperately firing an automatic rifle (the same one from the Season 5 premiere?) from inside the RV towards the main door – is he surrounded by walkers? Expect some heart-racing action – indeed, we also get to see Rick driving the RV covered in blood and in some pain. Furthermore, could the opening scene of Rick running along a road be connected to this? I reckon so. It's also nice to have an RV back in The Walking Dead after the premature destruction of Dale's RV in the Season 2 finale. 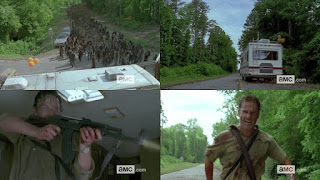 However, with an impressive shot at night featuring a whole herd of walkers crammed up against the fences of Alexandria, it looks like in the first half of the season we'll get to see some major walker carnage. It appears as if the streets of this quiet little town are about to run red – Jessie is seen hiding in a cupboard with her cookie-obsessed youngest son Sam as shadows pass by. I think it's safe to say we'll be seeing some serious undead swarm action, but not just in Alexandria – it looks as if Michonne is trapped elsewhere surrounded by walkers (but her trusty katana comes in handy). 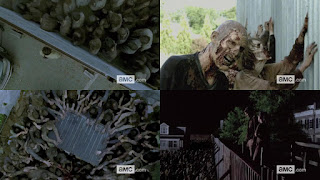 In another part of the trailer, it seems that Glenn and Nicholas have put their differences aside and are fighting side-by-side – perhaps on a supply run to another town – when they're confronted by a whole mess of flesh-hungry walkers. Expect close quarters, skin-of-their-teeth stuff! We also get to see a glimpse of Heath – a character from the comics who is new to the show – supporting Glenn. Presumably they meet up during Glenn and Nicholas' troublesome adventure into that walker-infested town we get a few glances at. As a side note, Heath does appear in the wide shot of the Alexandria town meeting – obviously, the order of events presented in the trailer will be different when the episodes start airing. 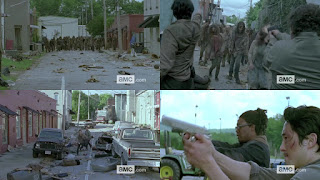 Otherwise, there could be a love triangle sub-plot for Carl – we get a glimpse of him appearing to spot Enid, with whom he struck up a tentative relationship in the last season, but she's hugging what seems to be another boy by the lake. If so (i.e. if the editors aren't tricking us), who is the boy? Are they a native of Alexandria, or not? She's been outside the fences for a little while and has clearly got into a spot of bother (she returns to the gates of Alexandria looking rather dishevelled).

Naturally, being The Walking Dead, we should get some juicy walker action. However, there was really only one properly stand-out undead beastie in this trailer – the sewer walker (surely a contender for the Season 6 limited edition box set) – that attacks Aaron and Maggie. 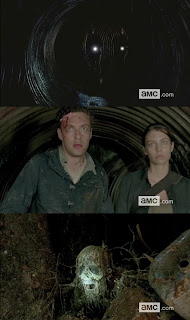 Finally, Daryl gets himself into a little bit of trouble out in the woods – woods which have been scorched by a forest fire, perhaps – finding himself tied up and held at gun point. Could Aaron have been out on a run with Daryl (the latter has his custom bike with him) and they got split up – could Aaron have then gone out searching for Daryl with Maggie? However, Daryl frees himself and comes across a couple of women who seem to be living out in the woods. Are they Wolves? Maybe they're escapees, or even a splinter group from the Wolves? They could also be some of the people who tied up Daryl. 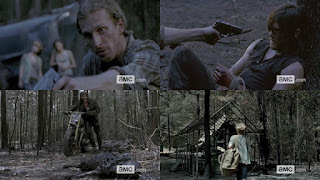 Remember in Season 5 when Daryl and Aaron stumbled upon that woman who was tied to a tree and left to be feasted upon by the walkers? Whoever these Wolves are, they're not nice – but clearly not everyone in their ranks agrees with their methods. I'm sure we'll find out more about them as-and-when, but could the first half of Season 6 be dedicated mostly to the thrilling danger of walker herds and the battle of Rick versus Everyone, saving the Wolves for a recurring background menace until the mid-season finale?

Time will tell. The Walking Dead returns with an extended premiere episode on October 11th 2015 in America, and airs everywhere else around the globe within 24 hours. In the meantime, Fear The Walking Dead (the spin-off companion series) starts airing in August.
Posted by Nick Thomson at 17:44