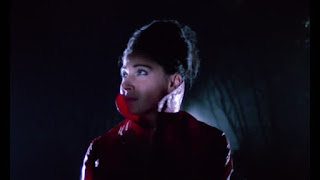 “Guaranteed! The 8 greatest shocks ever filmed!” Mario Bava (A Bay Of Blood) established the basic thematic template of the Italian giallo film with the Hitchcock-influenced The Girl Who Knew Too Much in 1963 before laying out – in full-bodied colour – the visual essence of what would become an iconic movement in Italian cinema. Vibrant splashes of pink and blue, red and green, filled the off-kilter frame as the camera glided through shadowy corridors. Bava, a former lighting cameraman, also made full use of the frame in all dimensions, with action frequently taking place throughout the entirety of his meticulous compositions – side-to-side, top-to-bottom, front-to-back. Excess, violence, and sex are common visual and narrative themes in gialli, and here in Blood and Black Lace – essentially the second ever giallo film – Bava unleashed a beast... 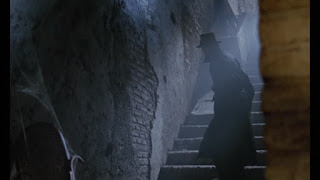 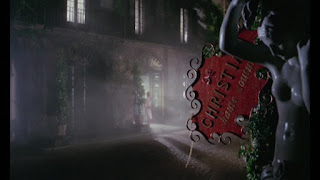 “A fashion house of glamorous models becomes a terror house of blood!” The Christian Haute Couture salon, owned and operated by the widowed Countess Cristina Como (Eva Bartok), and Max Marian (Cameron Mitchell), is a home for high end fashion, breath-taking beauties, and sadistic murder. Opening on a stormy night – rain lashing, lightening flashing, thunder crashing – a Gothic incarnation of red riding hood unfolds with Isabella (Francesca Ungaro) as the first in a long line of victims to fold at the hand of a twisted killer! Decked out in black hat, mac, and leather gloves – replete with a featureless cloth mask – the classic-looking slicer and dicer of many gialli to come was established in striking style. 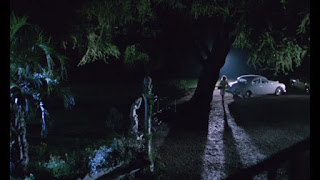 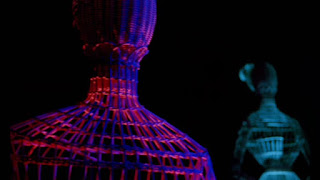 “She was rather lively, perhaps lacking discipline, nothing seriously wrong with her.” Once Isabella's bloody, rigid corpse is found, a complex tale of murder and vice begins to unfold. Isabella was one in a line of lovers for Frank (Dante Di Paolo) – a coke-snorting antique dealer who was cheating on her with Nicole (Arianna Gorini) – and had managed to wrap up a number of her acquaintances in a spiral of debt. Indeed, Isabella – as detailed in her suddenly discovered diary – seemed to know an awful lot of other people's secrets. 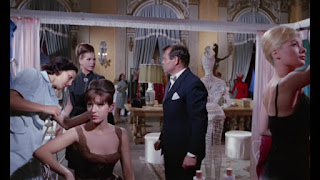 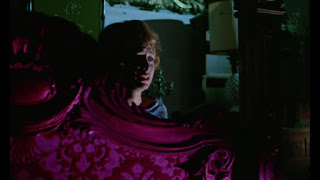 “Yes I can say I knew her – only slightly though.” So who would have wanted to kill Isabella – and keep on killing? Cristina or Max or Frank? How about impotent dress designer Caesar (Luciano Pigozzi – the Italian Peter Lorre) – forever close to beautiful women, but middle-aged and unable to do anything with his urges – or what about the financially busted Marquis Richard Morell (Franco Ressel), or Marco (Massimo Righi) the twitchy pill-popper? Indeed, in this contorted plot – scripted by Marcello Fondato with Giuseppe Barilla and Mario Bava – just about anyone and everyone could be the killer! 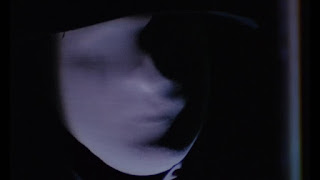 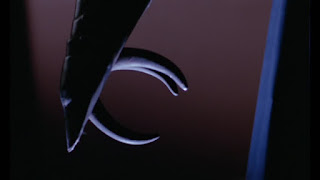 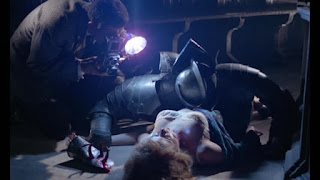 “Well I hope it doesn't become scandalised if I tell you, I don't believe in permanent and exclusive relationships.” Pre-dating the infamous 'bodycount' set-up of the likes of Friday the 13th by the best part of twenty years, Blood and Black Lace sought to shock and thrill in equal measure. Drowned, strangled, stabbed, and even scolded to death, Bava racks up a considerable pile of bodies and – much like the slasher movies that his films would help inspire – at regular intervals. Naturally, being that this film was released in 1964, the blood-gushing spectacle of gialli-to-come – like Dario Argento's Tenebrae – is relatively brief and moderate by today's standards, but then suggestion is often stronger than lavish effects. 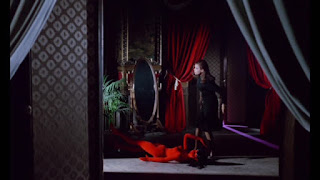 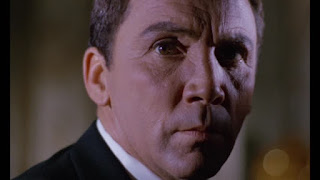 “All the men are under arrest and I'm sure the murderer is one of them.” Similarly, when it comes to sex, the film is – in the light of the 21st Century – reserved. However, for the time it was part of a wider social awakening. The strongly Catholic outlook of 'saintly mothers or despicable whores' was being eroded in favour of a much more complex femininity on-screen. Now women could be independent, sexually liberated, forthright in their opinions, and indulge in amorality – they could even be killers. In this light, the explosion of political correctness in recent decades, seems somewhat ironic. Furthermore, sex and violence – two extreme experiences – have always been linked, and not just in giallo films which, in-part, took inspiration from 'whodunits' by Edgar Wallace and Agatha Christie, as well as devious comics like Diabolik. To simply write these films off as 'misogynist' – as their critics like to do – is misguided. It applies the savagery of today's narrowly 'right-on' social media witch hunt era to a decades-old time of expressive socio-political change. To deride these films in such a way – a way that frankly obscures the detestable horror of true misogyny – is a curious and selective misinterpreting of gialli's intentions. Art – film included – is a mirror for society, and not every single piece of it is for everyone. Blood and Black Lace inspired an outburst of popular and creative cinema, but also reflected a deeper – and far more complex – period of artistic, sexual, and political movement away from repression. 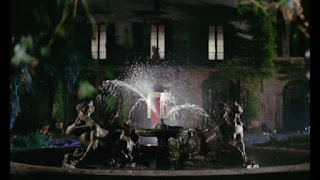 “A man I'm sure, he dressed in black, but he seemed to not have a face.” Spectacle, more-so than story, was where Bava's talents flourished. While his film features some fairly stiff 1960s acting, what is captured within the camera's frame is sensationally luxurious. Photographed by Ubaldo Terzano (employing a child's wagon as an impromptu, free-roaming dolly), the film looks stunning – all the more so with Tina Grani's fantastic costumes and Arrigo Breschi's lavish set design. Indeed, one particular highlight takes place in and around the layers of stored antiques in Frank's shop, in which one of the models and the killer lurk in the shadows between intermittent bursts of neon green from a nearby nightclub sign. The film also displays a keen understanding of the language of cinema, most keenly felt in a scene revolving around a handbag containing Isabella's secret-laden diary, that demonstrates Mario Serandrei's razor-sharp editing. 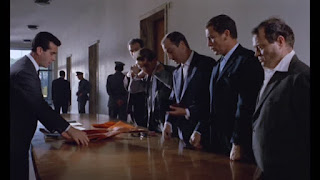 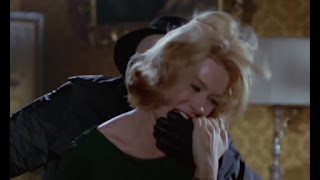 “I couldn't have gone off with an easy mind knowing you were alone in this house.” Also known as 'Fashion House of Death' and 'Six Women For The Murderer', Bava's fully realised giallo prototype delves into madness and excess. Bolstered by genuine mystery and talented behind-the-camera craftsmanship, Blood and Black Lace is an iconic piece of filmmaking – a milestone in cinema – that still holds up today. While it may feature some occasionally wooden acting, the bravura flourishes witnessed throughout cannot be denied. 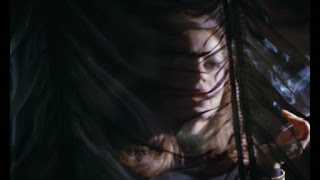 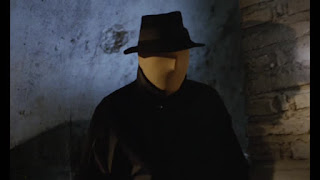 “I know I look like a fool, that's what makes me mad – I'm ill and unlucky.” Arrow Video have given Blood and Black Lace a truly exceptional treatment on Blu-Ray, which features a gorgeous visual and aural presentation thanks to a meticulous 2K restoration project. Complimented by a series of informative extras – including the fascinating 'Psycho Analysis' and academically rigorous 'Gender and Giallo' – put simply this Blu-Ray/DVD combo is a must-have for giallo fans and all aficionados of cinema. Also included in the wealth of extras is Ryan Haysom's cracking neo-giallo short film Yellow.

N.B. Screenshots were captured from the DVD extras as I don't have a Blu-Ray drive and my copy mistakenly came with two duplicate copies of the DVD extras disc (instead of one extras DVD and one DVD copy of the feature) in addition to the main Blu-Ray disc. You can see an excellent comparison of various releases of Blood and Black Lace - including this Arrow Blu-Ray (with HD screenshots) - over at DVD Beaver.
Posted by Nick Thomson at 17:38