The Neon Demon - a quick review... 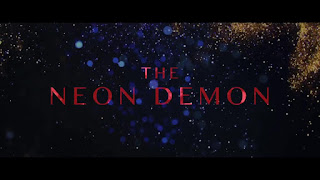 What's it about?
A delicate young girl enters the viper's nest of the Los Angeles modelling world where retirement often strikes just when you reach the legal drinking age, as sparkly dreams give way to DayGlo-coloured nightmares.
Who would I recognise in it?
Elle Fanning, Jena Malone, Keanu Reeves, Christina Hendricks, and others.
Great/Good/Alright/Shite?
Nicolas Winding Refn (Drive) seems to be striving to reach a 'post-narrative' world of his own. The plot to The Neon Demon could be written on the back of a postage stamp (surprising, then, that the screenplay was penned by three people), with the climax never really daring to push narrative boundaries. Here, style is king - and doesn't it look (and sound) good? However, strip that away and - much like your average model's lunch - there's little nourishment on offer...

The sense of atmosphere as well as the visual and aural presentation are sublime, but the film lacks any glimmer of heart, maintaining the ice-cold, soul-less stare of a runway model. Even the more dreamy, naive moments echo with the hollow sound of incomplete thoughts. Refn has a fondness for exploitation fare and does dish out some moments of graphic violence (although these are sparsely placed and briefly held on-screen). Intended to be a "horror movie", it stretches the definition and the accompanying viewer expectation. Indeed, The Daily Mail got their knickers in a twist over this flick - raving about necrophilia and cannibalism - but Nekromantik or Cannibal Holocaust this most certainly is not. The Neon Demon, relatively speaking, is exceptionally tasteful fare for the most part (general creepiness aside) - so any tabloid fervour sprayed in its direction, like the frothy saliva of a rabid offence-taker, goes unearned. 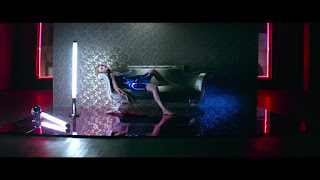 The laid back cool and dark romance of "Drive" is absent. Instead, what we have is a glitzy void, a black hole with glitter and lipstick. Plot points do occur on occasion, but often vanish as quickly as they came with little in the way of through-lines or conclusions for the most part. Case in point, Keanu Reeves' seedy motel operator: just as a curious turn happens, he and his subplot completely disappear from the film without even a vague sense of completion. Structurally the film resembles the strangeness of a dream with its scattered feel and striking imagery. Meanwhile, to be frank, Refn - branded on the title screen as "NWR" (like a celebrity fragrance or brand of expensive heels) - seems to be taking himself terribly seriously. Humour is rare-to-non-existent, and dry to the point of being po-faced. For goodness sake, man, have some fun with all this and indulge your exploitation movie fantasies! 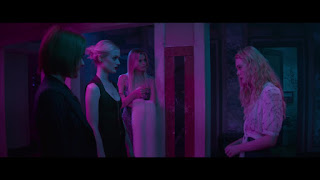 Style and mystery and the dark underbelly of Los Angeles have formed the basis of many films in the past, including numerous great ones - such as Maps To The Stars or Mulholland Drive - but even with their fractured stories and despicable characters, there's always a heart and a narrative through-line to grab on to, something to afford deeper meaning and emotional investment. The Neon Demon is, for the most part, left wanting in this regard during an overlong run-time that ultimately offers nothing all that meaty to chew on. 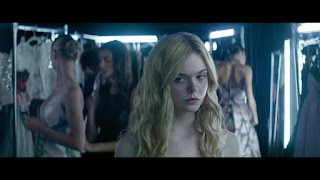 The Neon Demon makes for an extraordinary sensory experience, like a dramatic art show drenched in bright colours and defined with crisp, clean, symmetrical lines ... but more heart and some storytelling focus wouldn't go amiss. While I didn't find myself looking at my watch and was intrigued throughout, your tolerance for it will depend on your own taste for such things and whether or not you're in a very particular mood. Alright/Good.

Find more horror movie reviews HERE . “Hello, America. Did you miss me?” 3 From Hell is the belated third, and likely final, ent... 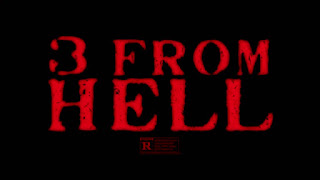