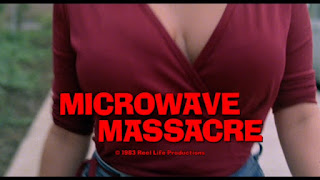 “I got an idea all right, but I think it's against the law.” Everything you need to know about the tone of Wayne Berwick's Microwave Massacre can be gleaned from the opening sequence. Strutting in with an foot-tappingly catchy funkadelic opening theme, Marla Simon (credited as 'Knothole Girl') – in figure-hugging high 'n' tight jeans – jiggles her way down a suburban street brandishing all kinds of swagger. She happens upon a construction site and a hole in a wall, in which her ample assets become lodged after a creep gooses her. Two workers spy the scene unveiling itself from the other side and charge in goggle-eyed wonder – but they miss out at the last second. Yep, it's the 1970s and this goofy brand of working men's club humour is the order of the day. It's the sort of thing you might have seen in the work of Russ Meyer or those “Confessions...” movies with all their waggling eyebrows and double entendres, as a schlub in search of a simple working man's meal discovers culinary cannibalism as the solution... 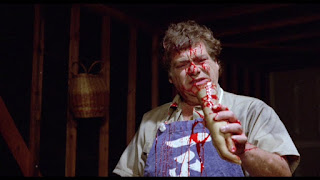 “I have to go to the breast room … I mean rest room! Be right back!” Fed up with fancy food – such as a whole crab stuffed inside a boule loaf – the downcast and slow-talking Donald (stand-up comedian Jackie Vernon) begs his wife May (Claire Ginsberg) to put aside the flambé and serve up something a little more blue collar from her gargantuan microwave. Resorting to extremes – like a dog food sandwich – Donald eventually snaps and batters May to death with a salt grinder (making sure to toss a little over his left shoulder in the process). But what to do with the body? Hack it up and stash it in the fridge, of course! 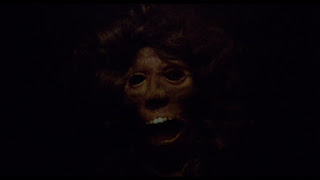 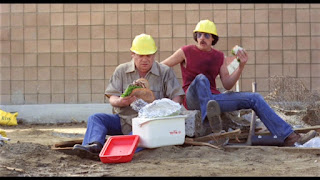 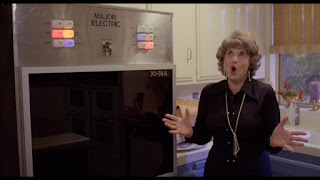 “When it comes to cooking you'd make a good decorator.” However, when a sleepy midnight snack turns out to be one of his wife's hands, Donald's aversion to cannibalism takes a swift back seat to a newly discovered tasty treat, one that he's generous enough to share with his workmates Philip (Al Troupe) and Roosevelt (Loren Schein). Gifted a new lease of life, Donald soon takes to finding more nubile flesh to simultaneously resurrect his deceased sex life and keep his fridge stocked with juicy, slow broiled lunches – but how long can he keep this secret hidden? 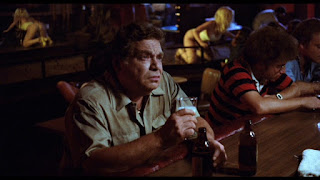 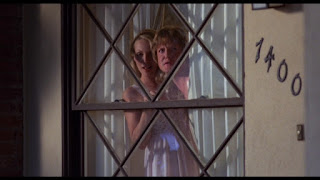 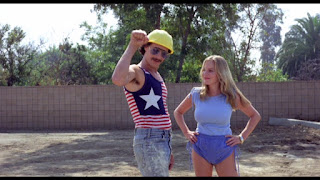 “I can't remember the last time I had something good to eat.” And that's about it, really. Clocking in at a scant 76 minutes (with credits), a lack of sub-plotting and a minuscule budget (about $80,000) means the meat on these bones is pretty lean. However, Microwave Massacre is positively heavy with vaudeville-ish humour by way of 1970s smut. The gags come thick and fast, from Lou Ann Webber's cherry-sucking prostitute named Dee Dee Dee (because her mother had a stutter) to white man Roosevelt teaching black man Philip how to feel the groove, and from the swinger couple next door to 'Knothole Girl' groping a beefcake construction worker who turns out to be gay, it's safe to say that subtlety and taste are not high on the list of priorities. Some of the gags have a low brow charm and work surprisingly well for what they are (the mistimed bleeps on a TV talk show), while others clatter to the floor like so many pots and pans crashed into by a bumbling doofus (the drive-thru gag). 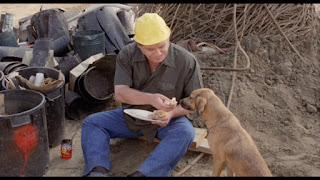 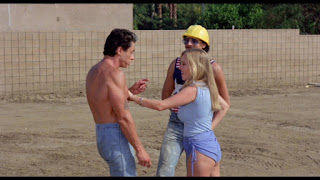 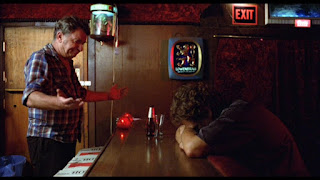 Suffice it to say, this movie would never be made today – thank heavens for that! screams some miserable bugger from the rafters – but even though much of the humour was already pretty dated at the time of the film's production in 1978, the flick does possess certain charms. Seeing that as much as a quarter of the already dinky budget went to paying Jackie Vernon, money was tight, but that family vibe of 'low budget first time feature film making' shines a glimmer or two through the murky clouds. Donald's kitschy home décor and Sam's dive bar capture the modest side of Los Angeles and churn out production value for little investment, but the same cannot be said of the gore effects. Much of the grue is either left conveniently off-screen or flashes by quick, but sometimes not as quick as needs be. A few sketchy fake body parts (some evidently bought on-the-cheap from a joke shop) let down gore fiends, but it all adds to the delirious soup of silliness that is Microwave Massacre. Originally intended as something darker, the script – written by Craig Muckler and Thomas Singer – took on a far dafter tone, which the director leaned into with gusto, and a similarly 'go with it' attitude will serve viewers well. 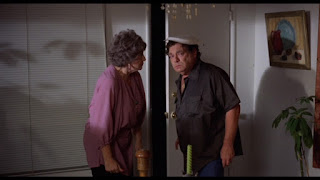 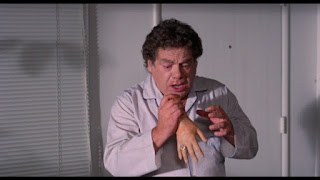 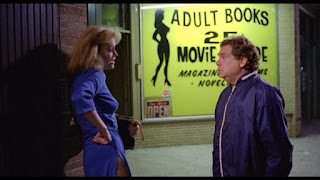 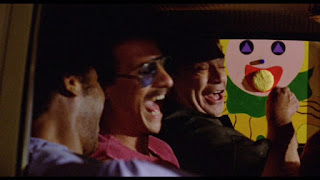 “You're a walking contraceptive, you know that?” For the most part the unbridled absurdity pays off, but eventually the clumsy pacing and plotting sputters in the back half as the film lurches towards a sudden finish. Indeed, the finale seems to lack any sense of climax at all. The film almost seems to stop happening with any comeuppance occurring totally off-screen while a slighter-than-slight supernatural sub-plot pops in to remind you that it was actually introduced a while ago. Despite the various flaws on display, though, there's usually something around the corner to inspire a few chuckles and bring you back around to its gleefully goofy way of thinking, from the neighbour gardening with a personal massager to the credits listed 'In Order of Consumption'. The 'Loony Tunes for infantile grown ups' nature of Microwave Massacre is as likely to be a turn off as much as a turn on, depending on each viewer's tolerance for low budget schlock fare. If you're not on board with what's been described above – and especially if you're easily offended by dated gags and rudeness – naturally look elsewhere for your entertainment, but if this tickles your VHS trash funny bone you should get a few kicks out of it. 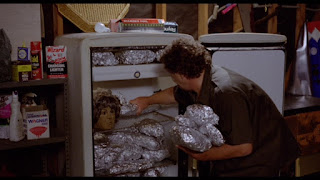 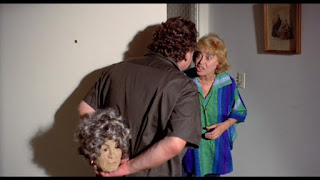 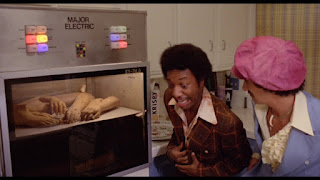 “Now I know where I seen them … er, you!” Arrow Video's 2016 Blu-Ray release features a solid visual presentation and a workable audio track, the flaws of which will no doubt be down to the quality of the source elements (clicks, pops, and various moments of degradation do, however, infuse a bit of nostalgia for the old days of reel-to-reel celluloid film projection). Unsurprisingly for a title this niche, the extras aren't copious, but they make for a fine aperitif. In addition to an audio commentary, trailer, image gallery (dig that première invitation), and booklet, viewers also get a 21 minute retrospective documentary featuring key players and some interesting tidbits: the infamous opening credits sequence was improvised after the original idea was canned when a grocery store location pulled out at the last minute. Finally, hardcore fans can check out the the original treatment and 8-page synopsis via BD/DVD-ROM content.

N.B. Screenshots are taken from the DVD copy of the film.
Posted by Nick Thomson at 17:12