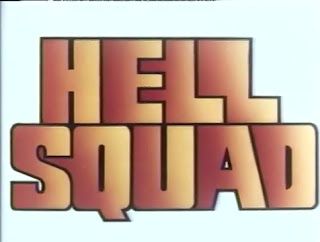 “Is this a joke?” Dig this. The son of an American Ambassador in the Middle East has been kidnapped and the government wants nothing to do with it. He has a problem, and there's no-one else who can help, so he hires The A-Team … no wait, he doesn't. Indeed, his assistant figures it'd be a waste of time employing mercenaries so, using his connections in Las Vegas, he hires a gaggle of showgirls to stage the daring rescue. Yup! 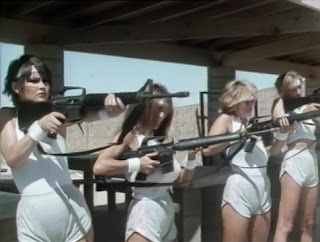 “We have less than ten days to transform you from Las Vegas showgirls to expert Commando fighters.” If that sounded stupid, the reason for Jack Stuart's (Glen Hartford) kidnapping is linked to a completely nonsensical weapon: the Ultra Neutron Bomb. What's that, then? It's a new kind of WMD, one that can turn any living creature to ash while leaving all the structures intact for future generations. This marvellous solution to modern warfare is not only born out of complete resignation to the inevitability of human annihilation, but it also leaves the bombed-out area contaminated with radiation – meaning the intact structures are left too radioactive to be occupied anyway! Ignoring the total internal illogic of this 'genius' weapon of mass extinction, the terrorists (a bunch of low-rent American actors wearing tea towels with fake-as-fuck facial hair and speaking 'Middle Eastern-sounding' babble) want the Americans to hand over the fuel for this bomb, dim-wittedly thinking one Ambassador's son is a fair exchange for the toppest-of-top-secret military knowledge! 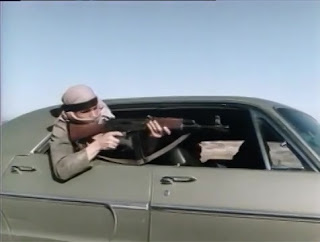 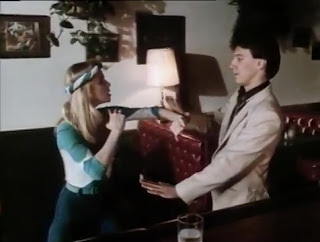 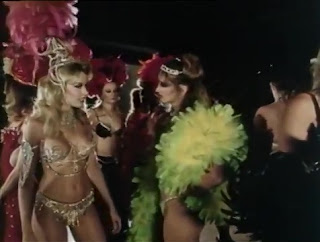 “People make wars, Jack, not property.” Yes, that line of dialogue makes utterly no sense whatsoever, but nothing yet has, so why should anything the characters say hold any microscopic shred of intelligence? Anyway, the Ambassador's assistant Jim (Walter Cox) heads to Vegas to meet up with an old flame – Jan (Bainbridge Scott) – the leader of a company of showgirls. Declining a drink from Joe the Bartender, Jim proceeds to tell Jan about the sticky situation involving Jack. Yes, that is a lot of names beginning with the letter “J”. Offering money, fame, and excitement to a changing room full of showgirls fresh off-the-stage – and in the vaguest of vague pitches – it's off to the training camp! 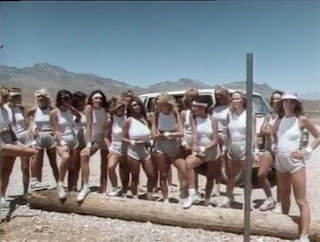 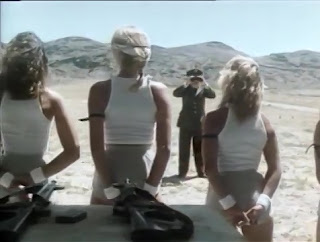 “It'll take more than some T&A. It'll be tough and dangerous.” Dropped off at a super secret CIA training camp in the middle of the Nevada desert – a super secret training camp that every showgirl in Vegas seems to know about – the rough 'n' tough training programme begins. Well okay, it's not exactly rigorous, in fact it wouldn't look out of place in your average high school gym class. The girls (in their tight white tees and skimpy gym shorts), have to stumble through a tunnel, and clamber over a few old tyres and a flimsy wooden wall a few times before heading to the gun range. Whew! Time to don those swimsuits and head to the General's on-site swimming pool (don't all of the military's top brass have those?) to await the announcement revealing who has been picked for the mission. 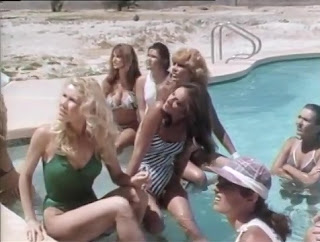 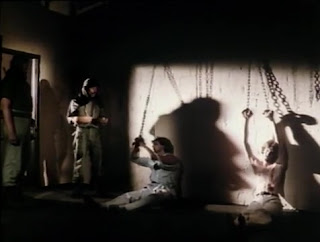 “I always serve a useful purpose.” / “Yeah, a couple of them.” Flown to the Middle East – possibly Syria? – the girls swoop into their plush hotel room and all jump into a bubble bath together. Of course they do, what kind of movie do you think this is? However, the preceding exposition justifying this scene has to slide into the Top Ten excuses for T&A in a direct-to-video movie ever expressed: one of the girls recently read an article about how the nation is rich with oil, but has a chronic water shortage, so the morally reasonable thing to do is obvious. But, oh darn, their bubbly good time is promptly interrupted by the first stage of their mission. 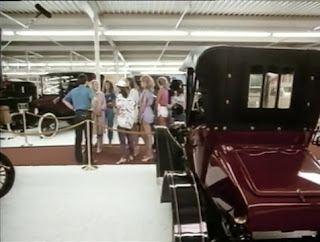 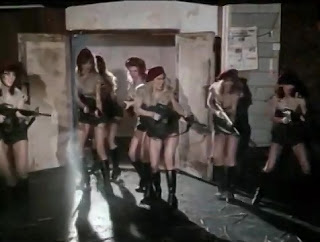 “What's wrong, boys? I thought I was supposed to be the weaker sex.” Charging through the desert, the Hell Squad – looking quite like members of a Military Junta is some broken down banana republic in their black shorts and berets – storm an encampment of soldiers and slaughter them all in short order. Hmm … no sign of Jack and no living suspects to interrogate. Oh well, better head back to the hotel for another all-together bubble bath! But, yet again, the fun is interrupted for these 'highly trained' undercover operatives, who proceed to make an even bigger splash when they raid another encampment and either blow up or gun down every living soul in sight. No recon, no checking to see if Jack might be in range of friendly fire, just a straight up war crime and away they go to another bubble bath! 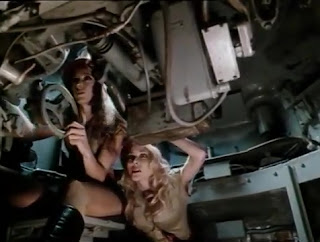 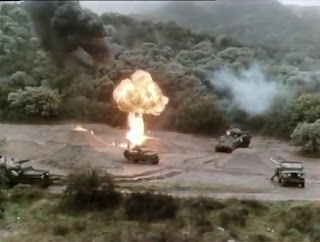 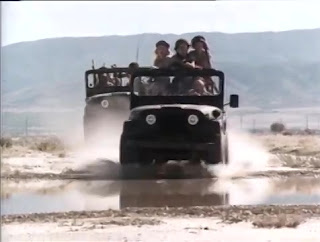 “We're not just Las Vegas dancers – we're trained Commandos!” Having failed to find any sign of Jack, it's at this point that the movie goes increasingly off-the-rails. According to IMDb, the original screenwriter – Donald F. Glut – withheld the final third of the screenplay because he hadn't been paid, so director Kenneth Hartford cobbled together something himself. The Hell Squad are kidnapped by 'The Sheik', played by the veteran American actor Marvin Miller (who was decidedly not Middle Eastern), appearing here, quite briefly, in his final screen role as a Tiger-owning despot. You would think the Hell Squad are in real peril, about to be fed to a Tiger with a rumbling tummy, but nope – it's all smooth sailing for these glamorous gals. Even the final mission is pulled off with staggering ease – and while wearing swimsuits! 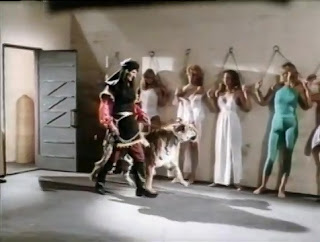 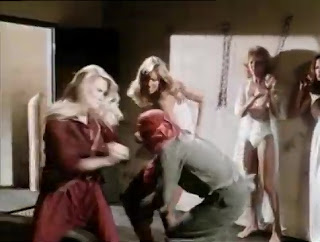 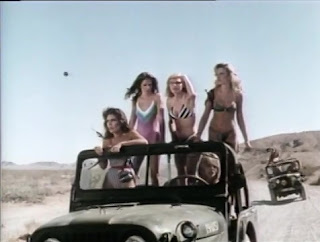 “I don't believe you are only dancers!” The third act is a total mess, with the viewer sensing that there was plenty of room left on the back of whatever cigarette packet on which it was dreamt up. Indeed, a very late reveal – I won't spoil it – makes utterly no sense whatsoever. Genuinely no sense at all considering how well acquainted the Hell Squad were. But, therein lies part of the charm of this dumber-than-dumb VHS-era exploitation action comedy. The jokes may flop like dead fish, but the premise alone raises enough chuckles to make it worthwhile viewing for fans of so-called trash cinema. This particular copy is presented 'open matte' (i.e. the originally intended 1.85:1 framing is 'unmasked' at the top and bottom to create the old 4x3 format, suited to to fit viewers' television screens at the time) and this presents its own questions. One: did the filmmakers really think this movie was going to get theatrical distribution? Two: how many super blatant appearances by the boom mic did you spot? Seriously, at least a quarter of the movie features a boom microphone wavering above the actor's heads! 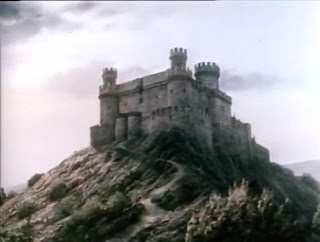 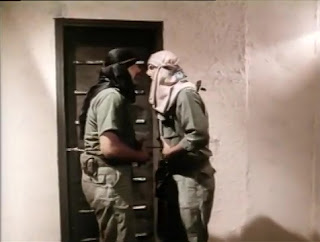 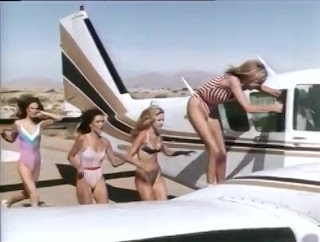 “I'm not talking about any government sanctioned rescue.” So, it definitely falls into the 'so bad it's good' territory, what with its utterly mismatched stock footage and ropey costumes (e.g. the Ambassador's chauffeur), and a premise that is simultaneously beyond idiotic and entirely intriguing. But the silliness is just too much fun to resist, and the cast of showgirls are all thoroughly game – the film even climaxes with them running to catch a moving aeroplane, leaping onto the wing to climb aboard! No stunt doubles here. They're riding along in bucking jeeps, clambering around on tanks, guns blazing, kicking ass and taking names. Good on 'em. Fans of low-end straight-to-video madness should find plenty to enjoy here.