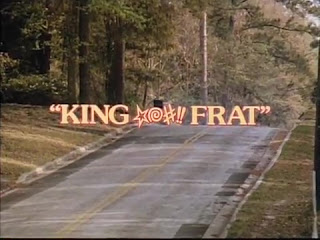 “Ladies and gentlemen, let the best asshole win!” Imagine, if you will, what a film made by a 10 year old boy might look like. Most likely it'd all be about about farts, wouldn't it? Step forward King Frat, a rushed-out Animal House knock-off, the highlight of which is an actual fart contest... 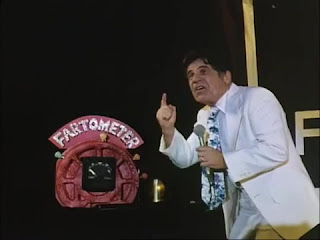 “One more look at those hairy butts and I'm gonna puke!” At Yellowstream University, the Pi Kappa Delta fraternity are causing mischief galore. Spearheaded by J.J. 'Gross Out' Gumbroski (John DiSanti, Batteries Not Included), they tear around the area in a hearse (license plate HEY 4Q2) while guzzling beer, antagonising civilians, mooning sorority girls, and performing deadly drive-by fartings. Yes! They actually cause the death of President McGafferty, so shocked is he by the rumbling butt blasts that are projected his way. It certainly wasn't silent, but it sure was deadly! 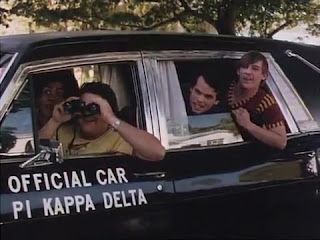 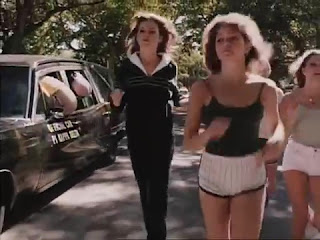 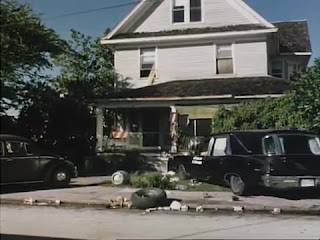 “My ancestors pissed in white man's water for fifty years. White man never knew … fucking dummies!” Naturally, Dean Delman Doyle (Dan Fitzgerald, Police Academy 5), a former prison warden is hopping mad, much like preppy rich boys Lloyd and Boyd of the Alpha fraternity, and so he vows to pull those pesky PKD boys into line. They're a menace, is what they are, what with their gargantuan thirst for beer, catheter-supported all-day gambling sessions, and productions of voyeuristic films peeping into the girls' shower rooms. Gosh, what a lovely bunch. 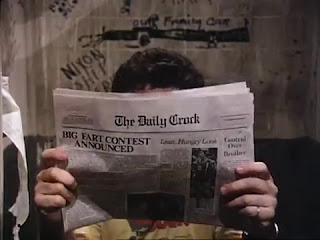 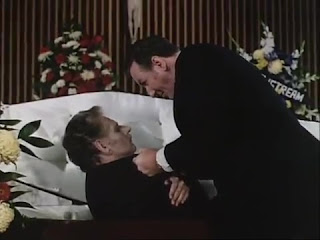 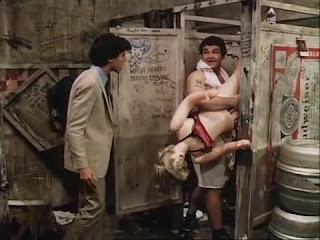 “Mind if I smoke?” / “'Course not. Mind if I fart?” How will Dean Doyle tackle these hoodlums? Not sure really, but a plan is afoot … maybe? Are the Pi Kappa Delta's really at risk, and do they even care? Umm … not really? After all, who gives a flyin' proverbial when there's a fart contest to be won?! Five hundred bucks for the most skilled bottom burper can't be passed up, and so, having already drugged the attendees at McGafferty's funeral and accidentally kidnapped the corpse, new pledge Tommy (Roy Sekoff), PKD President Fred (Charles Pitt, Russ Meyer's Supervixens), and the boys head off for flatulent fortune and gut-bubbling glory with Gumbroski as their rectal Olympian, spurred on by Chief Latrine's (Dan Chandler) special concoction of explosive bum booze. 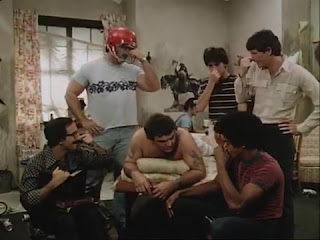 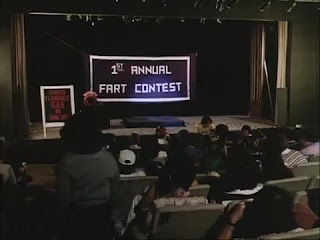 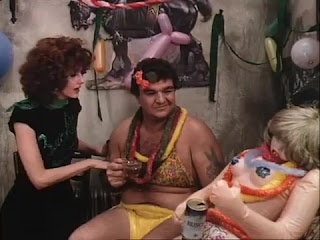 “Holy shit – fart contest!” What follows is the high point of the film, which doesn't say much in itself, and comes quite early in the running time. We meet Gumbroski's former girlfriend Bucky (Karen Gold), a frightfully gifted rear-end-rifter, whose fleeting appearance is one of many abandoned subplots that populate the cobbled together hodge podge that passes for the screenplay, written (quite possibly on the back of a napkin) by Ron Kurz, who we know can write a good script because he later penned Friday the 13th Part 2, one of the best sequels in the franchise. However, it seems that slinging out an Animal House rip-off in record time was a job too far. 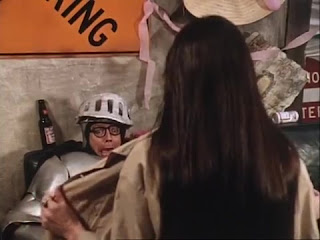 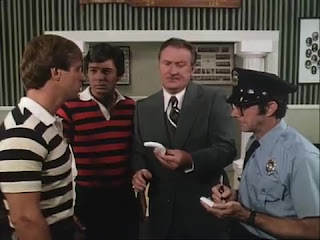 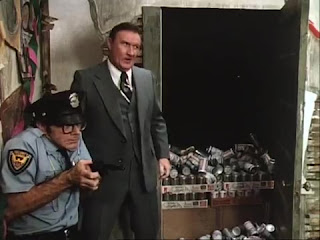 “A man can't fart or belch without eating.” Indeed, King Frat takes Animal House's memorably chaotic side character Bluto (played by John Belushi) and promotes his faulty clone to lead status, one of many haphazard idea-grabs from John Landis' hit 1978 comedy. The plot points of the script are so loosely thrown into a scrappy order that little, if anything, actually holds together. Every single subplot is left unresolved, while there hardly seems to be any main story either. There's a very basic sketch of the Alphas and Dean Doyle going up against the PKD boys, but the story is vague to the point of non-existence. Things happen almost at random, while not even Gumbroski can get a shot at fart contest redemption. Even the last minute twist of fate is pretty much based solely on a single dialogue-free cutaway scene of a character looking at an old map about an hour (with a whole lot of broken wind and questionable humour in-between) before it has an effect on the story. 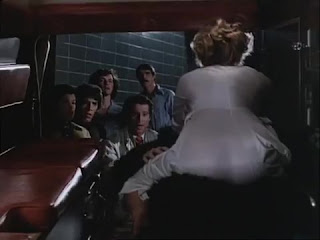 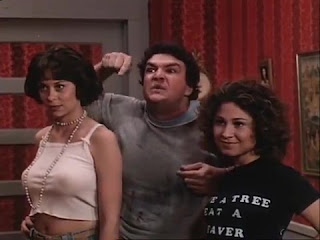 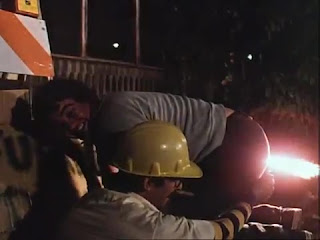 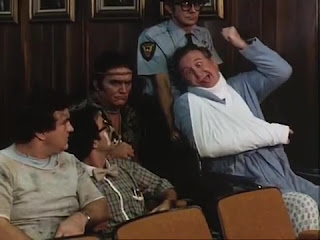 “The secret to drinking is puking?” Suffice to say, but King Frat will have minimal appeal these days, especially for the easily offended, who'll no doubt give Gumbroski a run for his money when they draw mud from all the decidedly 'non-PC' shenanigans occurring on-screen. Even those with a fondness for sleazy old comedies of the era (like School Spirit or Zapped!) will find little to genuinely amuse themselves with. Animal House has stood the test of time as it not only has an actual narrative, but it features iconic scenes that inspired copycats for years afterwards. King Frat on the other hand, directed by Ken Wiederhorn (Return of the Living Dead Part 2), is merely a slapdash calamity that only ever appealed to fart-obsessed boys forty years ago. Those familiar with it from their formative years might find some nostalgia all these years later, but any newcomers will watch with dead-eyed bemusement unless they're totally baked out of their gourd.