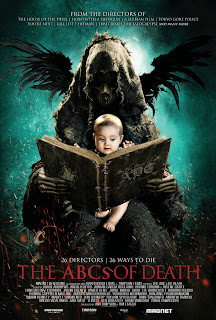 Anthology horror films are experiencing a regained sense of rude health of late, particularly with high profile flicks like V/H/S and it's sequel, but The ABCs of Death manages to strike new ground within the anthology horror sub-genre – put simply: 26 Directors, 26 Ways to Die. 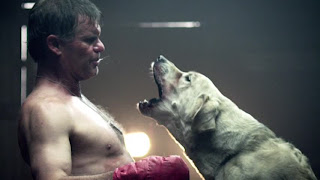 However, the trouble with anthology films is that not all parts are equal, with some failing to measure up at all – so what will it be for this inventive onslaught of horror? Hits, misses, and the iffy in-betweens all coming up for all 26 shorts.

A is for “Apocalypse”:
Domestic violence meets the end of days entirely within a single bedroom. A low-key and controlled start to proceedings. HIT.

B is for “Bigfoot”:
A randy couple want a kid to go to bed, so they tell him a tale of a bigfoot-like monster that comes after children who aren't in bed when they ought to be. Competently made from a technical standpoint, but it's lacking in tension or shocks. IFFY. 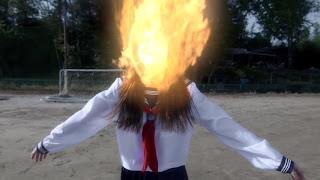 C is for Cycle:
There's a strange black hole in a man's back garden, and who is that behind him? MISS.

D is for Dog:
An extremely stylish slow-motion underground boxing match between a man and a dog. Dog lovers might not like it, but an extensive behind-the-scenes featurette shows how they safely pulled off all the stunts. HIT. 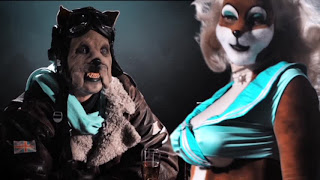 E is for Exterminate:
A voyeuristic spider lays eggs in a man's face as revenge for him trying to splat it. Arachnophobes might want to skip this one. IFFY.

F is for Fart:
“A fart from the arse of God” - that's an actual line of dialogue from this bonkers entry that's all about Japanese school girls farting. One hides from a toxic black gas with her teacher, with whom she shares an enormous yellow cloud of fart gas for her enjoyment … barmy. HIT. 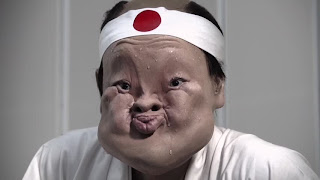 G is for Gravity:
All from a Go-Pro camera first person perspective. You can see the twist from a mile away and unfortunately it's not that interesting. MISS. 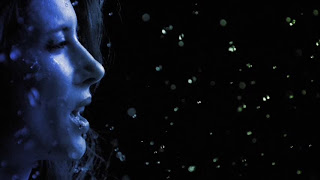 I is for Ingrown:
A socio-political statement about murder rates that's perhaps a bit too arty for it's own good. IFFY.

J is for Jidai-Geki (Samurai Movie):
A Samurai struggles to decapitate his victim who insists on laughing on pulling strange faces. A curious little slice of weird. HIT. 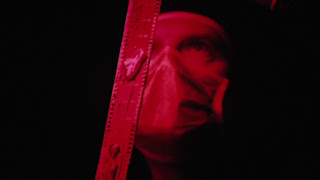 K is for Klutz:
The first animated short in which a party-going lady battles a turd, with comic timing, that is rather reluctant to be flushed. HIT.

L is for Libido:
One of the most outlandish shorts in the film, in which sexual perverts pitch men against each other in a self-gratification race while giving them increasingly distracting sights to look at. At one point it becomes extremely disturbing and shocking, and then goes out in a torrent of gore. HIT. 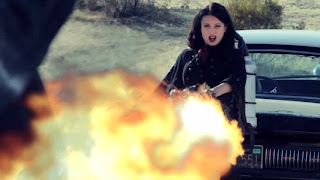 M is for Miscarriage:
A surprising mis-step from the usually tip-top Ti West here, in a rather lazy and hollow low-fi short which is simply all dull set-up for one grim shot. Considering how much some Directors got out of their budgets, you have to wonder where the money went on this one. MISS.

N is for Nuptials:
It's all about an exotic bird that can do tricks as a wedding proposal goes wrong. IFFY. 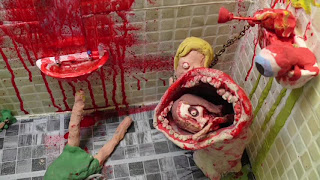 O is for Orgasm:
This short is one of the most visually stunning parts of the overall film, combining slow motion with stylishly graphic lighting and masochistic flourishes. HIT.

P is for Pressure:
A tonal side-swipe that doesn't fit very well with the overall film, mostly concerning a social commentary on prostitution that seems lifted from a previous short film idea with a gross-out shock moment tacked on the end. Pet lovers might do well to avoid this one entirely. IFFY. 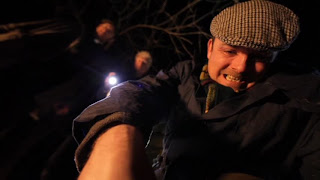 Q is for Quack:
Getting a duff letter to work with, the filmmakers go all-out self-aware and try to be clever, but largely fail in their quest for subversion. IFFY.

R is for Removed:
Somewhat obtuse in it's gore-drenched and medically-icky metaphor, where flesh is peeled from a man's body to reveal strips of photographic film. From the director of A Serbian Film, it's not surprising that the visuals and the message prove to be a bit mismatched and inaccessible, but it's strangely disturbing in a good way. HIT. 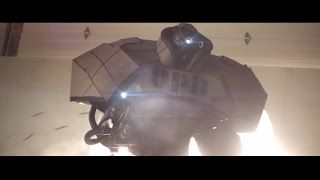 S is for Speed:
A comic book fantasy in which flame thrower-toting babes battle a monster in the desert and ride around in a muscle car, but the twist is interesting. Sure enough, this one's from Jake West. HIT.

T is for Toilet:
My personal favourite entry out of them all. Lee Hardcastle (who makes clay animations that are NOT for children) unleashes a monstrously bloody and darkly humorous take on toilet training. HIT. 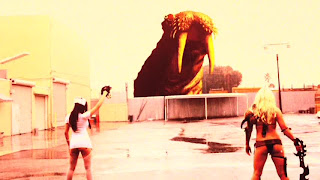 U is for Unearthed:
Ben Wheatley combines first person camerawork with vampire hunting. Visually impressive and one of the highlights of the film. HIT.

V is for Vagitus (The Cry of a Newborn Baby):
The most bang-for-their-buck short in this whole endeavour. CGI, impressive stunt-work, a robot droid, gun fire, explosions, a dystopian future world, a gloopy head explosion and more. HIT. 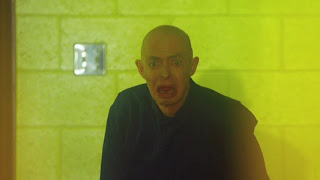 W is for WTF:
The other self-aware short in the bunch (after Q is for Quack), but this one pulls it off with plenty of silliness from clown zombies to bikini babes battling a giant Walrus that fires lasers out of its eyes. HIT.

X is for XXL:
Xavier Gens' extremely graphic observation of the body issue debate where an overweight woman goes to torturous lengths to shed the pounds and become the vision that's broadcast through every advertisement and through the mouth of every hate-filled passer-by. HIT. 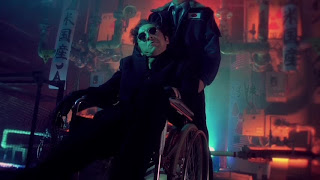 Y is for Young Buck:
Jason Eisener goes all music video with his trademark ballsy visuals, lashings of gore, a track from Power Glove, a perverted janitor, and a blood-oozing dead deer. HIT.

Z is for Zetsumetso (Extinction):
Quite possibly the most bizarre portion of the film which involves bared breasts, Nazis, a giant knife-wielding todger, a vegetable-firing fanny, more exposed boobs, a triple head shot, sushi, abuse of nuclear power, socio-political statements painted onto boobs and butts, and naked girls fighting. HIT.

'Based on a nightmare by Ant Timpson', it's 17 hits, 3 misses, and 6 iffy in-betweeners – nine of the hits coming in-a-row at the tail-end of the film. Total artistic freedom was afforded to each director, and that will perhaps account for some of the distracting tonal shifts that pop up from time-to-time. The mixing of genres sometimes works and sometimes doesn't, and while the misses and iffy-bits seem to be more loaded onto the first half of the film, there's enough gore, nudity and far-out weirdness to carry you through to the big name second half.

At over two hours it's a bit over-long, and with a sequel apparently coming in 2014, they'd be wise to limit each director to – for example – four minutes each. Those who are put-off by subtitles might have reason to grumble up-front as there's a surprising amount of foreign-language entries to start things off, but the dedication to making this a worldwide anthology provides a great amount of variety and spice.

In spite of the misses, this is definitely a worthwhile watch for fans of short films, horror cinema from around the world, and anthology enthusiasts. It might work better viewing it in bite size portions, and of course, your experience may vary from that of others.
Posted by Nick Thomson at 17:38