“By sword, by pick, by axe, bye bye!” In the wake of Sean S. Cunningham's 1980 slasher flick Friday the 13th (perhaps the ultimate in killer franchises) there came a glut of gore-soaked low budget maniac movies in which a slew of tender teens came face-to-face with meat cleavers, chainsaws, fishermen's hooks and all varieties of sharp objects. When Victor Miller wrote Friday the 13th, he studied prior films in the genre – most notably John Carpenter's seminal Halloween (1978) – finding the beats and working with them closely and, in the case of Buddy Cooper's The Mutilator (aka Fall Break), a similar path was taken, but with some playful tweaks thrown into the mix... 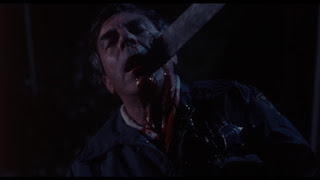 “Are you kidding? It's like a graveyard around here!” One of the key moments in any film is the 'inciting incident', the moment that kicks the entire story off, and with the slasher movie that incident is often known as the 'prior evil', some kind of hideous act that suggests someone at the county morgue should order up a couple dozen body bags pronto. In the case of Halloween it was the child's eye view of young Michael slaughtering his sister, while in Friday the 13th it was the back story of Jason Voorhees' untimely death-by-drowning when the randy counsellors weren't paying attention. In The Mutilator the 'prior evil' is no less chilling – especially in today's climate – as a young boy, Ed Jr, accidentally kills his mother while cleaning one of his father's hunting rifles. When his father returns home he suffers some kind of mental break and retreats into alcoholism, becoming estranged from his son – whom he believes has deliberately murdered his wife (on his birthday, no less)! 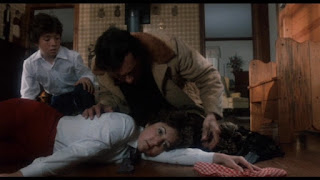 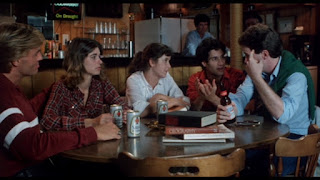 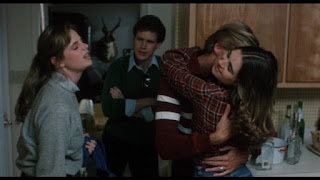 “Virgins, huh? Well, at least we're all safe – or are we?” Fast forward a few years and Ed Jr (Matt Mitler) is now a college kid. It's fall break and he and his buddies haven't a thing to do, until his estranged father calls and demands he closes up the family beach house for the winter – Ed Jr isn't keen, but a free beach house for a few days of booze-fuelled debauchery is too good an opportunity to pass up for his eager chums. So off they go, these young, foolish, preppy middle class American college kids, to – bang-on for the slasher formula – an isolated location with no adult (or police) supervision. So what if the door is wide open, so what if the house is littered with empty booze bottles, and so what if Ed Sr's battle axe is missing from the wall? 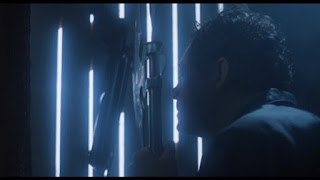 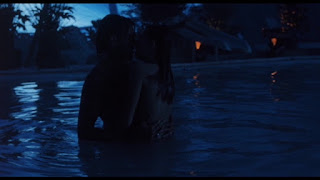 “Come on, sweet meats, let's go enjoy our night off.” Unluckily for them, and this isn't a spoiler to say (the film leans heavily into it from the get-go), but Ed Sr (Jack Chatham) is lurking below in the garage, hidden away in a store room with lots of sharp hooks needing to be occupied (echoing Mario Bava's Five Dolls For An August Moon) – and so, the inevitable stalk 'n' slash formula plays out. However, writer/producer/director Cooper does have some fun along the way, although his particular brand of humour doesn't always stick as some of the gags feel misplaced – such as the 'fast-mo skedaddle' moment – while some of the dialogue doesn't quite bear fruit. However, despite some ropey moments here and there, the film does manage to roll out a few good moments of suspense. At one point the gang all play 'Blind Man's Bluff', which turns into a clever ruse to isolate the cast in the dark (shame it's so bright for us!), and – in this 'unrated' version of the film – there's lashings of gore to go around. 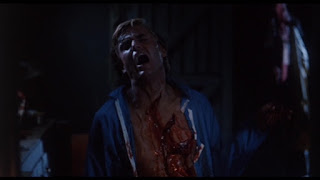 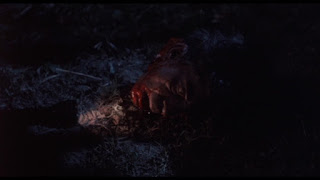 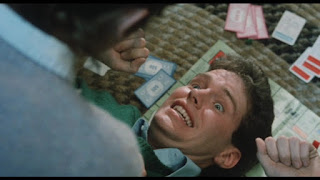 “Would you rather grope in the light?” Machetes plunge into faces, heads get lopped off, an outboard motor makes mincemeat of tender flesh and they all tickle the horror hound bone, but the climax goes for broke from an effectively wince-inducing 'car lighter meets hand' moment, to a blood gushing bi-section. While the film doesn't sling about much in the way of T&A (unlike some of its brethren), the splatter effects – created by Mark Shostrom (Evil Dead 2) and Anthony Showe – shine in this uncut version of the film. The cast, too, offers some memorable characters, most notably prankster law student Ralph (Bill Hitchcock) and Ed Jr's girlfriend Pam (Ruth Martinez). Indeed, Pam proves to be one of the film's main highlights as she is not only switched-on, but her closely guarded virginity is decided according to her own schedule rather than some sexist notion of frigidity. With a strong sense of herself, Pam refuses to be left alone once she cottons on to something wrong going down and is even trained in self defence – reflecting real-life horrors of the 1970s and 1980s when women in areas stalked by serial killers began to take self-defence classes. Pam thinks fast and gets the job done, quite literally leaving her boyfriend Ed Jr (who'd prefer a good night's sleep) in the passenger seat. 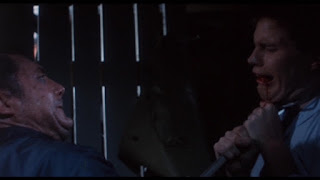 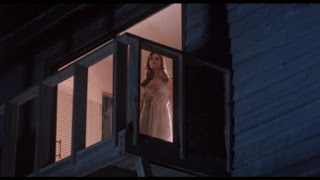 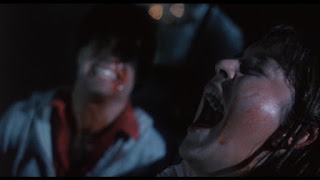 “I got a bad feeling about this.” The film is not without faults, though. The aforementioned humour falters as often as it soars – the credits reel (replete with jaunty 'Fall Break' theme tune) feels jarring, and the guided tour of Ed Sr's hunting trophies goes on too long (meaning the first half hour somewhat drags), but the foreshadowing is delicious. Any sense of mystery over who the killer is, however, is dispensed with almost immediately – we know exactly who is doing the killing, and why – but the typical 'killer POV' is present and correct with some very effective and moody synth drones and stabs. All said and done, though, for a first time film this is a solid flick – and a very good looking one at that, courtesy of Peter Schnall's impressive cinematography. While not one of the more iconic slashers, The Mutilator nonetheless has numerous strong points going for it (including the passion of everyone involved in the film's production) and is definitely worth checking out for fans of the genre. For another slasher set at a beach resort, you might want to check out The Slayer. 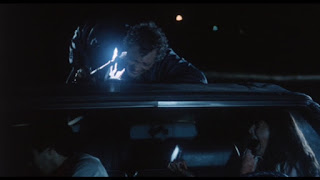 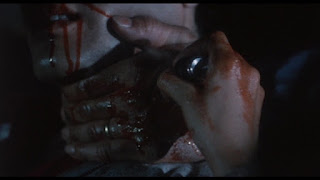 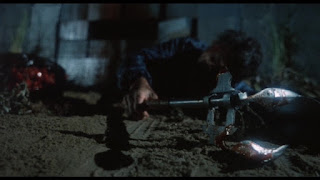 “Let's get this road trip on the road!” Arrow Video's 2016 Blu-Ray boasts a lot of goodies for fans both new and old, with a typically top notch HD restoration (condition of the 35mm film elements permitting). The extras package is hefty: two commentaries, a feature length making-of documentary, a look at the special effects with Mark Shostrum, an interview with composer Michael Minard, a reel of behind the scenes footage, screen tests, alternate opening titles, trailers, TV spots, storyboards, image gallery, two versions of the theme song, a very informative booklet and, finally, the original screenplay as a BD/DVD ROM extra.

N.B. Screenshots taken from the DVD copy.
Posted by Nick Thomson at 17:22