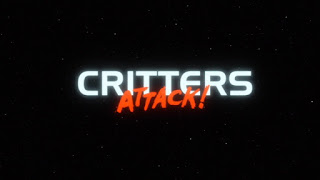 “You're not an idiot … more of a moron, really.” For 27 years the Critters franchise, which originally hit cinema screens in 1986 in the wake of the huge success of Joe Dante's Gremlins (1984), has pretty much laid dormant. Aside from a fantastic fan-made short film in 2014 (Jordan Downey's well received Critters: Bounty Hunter), those beloved fur balls with a monstrous appetite have been left to starve and gather dust. But, much like buses, you spend ages waiting for one only for two come along at the same time. Critters Attack! is not connected to the Shudder short series Critters: A New Binge (despite sharing the same production company), which was released in March 2019 to mixed reviews – but what of this fifth film in the carnivorous series: can it measure up like a rumbling post-feast rift, or will it fall flat like a pungent fart nobody in their right mind should have trusted?... 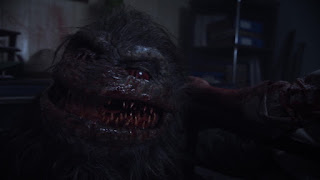 “There's something in your trunk. It's blurry, but I think it's an alien.” Starting innocently enough at the home of Drea (Tashiana Washington), her younger brother Phillip (Jaedon Noel), and their Uncle Lewis (Stephen Jennings), a UFO crash lands in the nearby woods and unleashes a lone Krite, which immediately grabs a quick snack in the form of a sushi delivery boy – before hatching a trio of new killer fur balls inside the half-gobbled entrails. Alien obsessive Phillip is adamant that intergalactic entities have landed, but nobody will believe him, least of all his college hopeful sister, who spends all day pining after the chance to attend Leroy College (get used to that!). 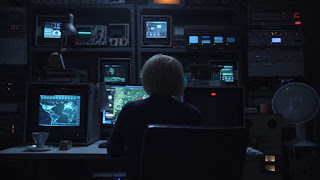 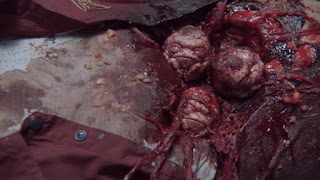 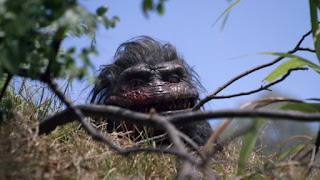 “On the plus side I read somewhere that it's a sign of good luck if a bird poops on you.” / “Well then, things are looking up for me for a change!” However, someone who isn't sceptical about aliens landing on Earth, is Dee (genre icon Dee Wallace), who promptly packs up her big ass guns, leaves her secret alien detection room, and ventures forth to take down the Krites before they infest the planet. Meanwhile, looking for a way to raise her profile with the admissions board, Drea gets a job babysitting Professor Lacy's kids – nature lover Trissy (Ava Preston) and text-aholic Jake (Jack Fulton). Bored, they head out for a walk in the woods, and stumble upon a friendly albino fuzz ball – actually another Krite – and take it with them, only to find themselves continually under attack from the roaming (and expanding) gang of killer Krites, who are intent on snarfing down on as much human flesh as possible. Will they survive? Will they stick to a plan for longer than two minutes? Will Drea finally get admitted to Leroy College?! 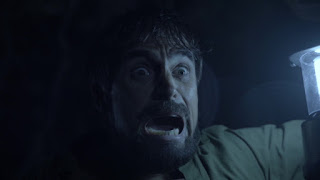 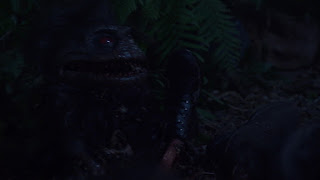 “A card game? What is this, 1986?” Directed by Bobby Miller and written by Scott Lobdell (who penned the wonderfully entertaining Happy Death Day), this belated fifth entry in the Critters franchise is – sadly – its weakest. Made in South Africa (obviously for tax incentive reasons like other low budget genre sequels like the more successful Tremors 5: Bloodlines and Tremors: A Cold Day In Hell), Critters Attack! is evidently on the low end of 'low budget'. Trailing a vague whiff of a gun-for-hire job or a rush write or something made without a full understanding of what makes a Critters movie cackle with evil laughter (or perhaps a combination of all three), the film appears more like it was shot according to a slap dash first draft, which spends a frustrating amount of time obsessing over Drea's wish to be accepted into the local University – a piece of story that should have only amounted to a brief sideline during her introduction, but which is returned to repeatedly throughout the entire running time to no significant effect. 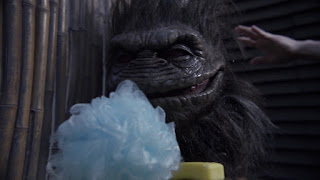 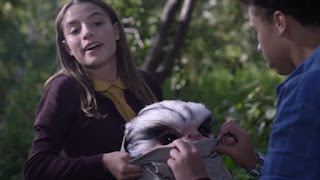 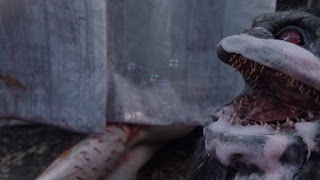 “You're so cute. I love your highlights … please don't kill me.” While it's good for the characters to have something to them – Drea and Phillip are mourning the loss of their mother, while Uncle Lewis' alcoholism is similarly linked to the tragedy – such drama feels overwrought and disjointed in the context of a fun monster movie. By all means, we want good characters with a bit of something about them, but to pad their vague journeys with so much that is, ultimately, inconsequential to the overall plot of the movie, and only serves to drag down the non-Krite portions of the story, is a sore mistake to behold. To what worthwhile extent (if any) does Phillip's generic crush on Trissy influence either character's personal journey, the plot, or the action? Same goes for Jake's cellphone addiction and muted voice, whereby when he finally speaks it's of no real importance or use. It's especially odd, too, considering how strong (and relevant) an arc that the main character had in Happy Death Day. Indeed, when all the college stuff is extended further with bitchy Mandy and preppy Gregory, the viewer is left feeling immediately restless. Furthermore, various emotional beats are under-served by some flat dialogue and flatter acting, adding to the generally uneven tone of the movie. Sometimes it hits, sometimes it misses, with another example of this being the self-referential style. Occasionally it works well, with the actors pulling off some nice moments of goofy humour, but other times it completely undercuts the sense of peril: if the characters don't care that someone they love is in mortal danger, or is flat-out dying, why should the viewer care? 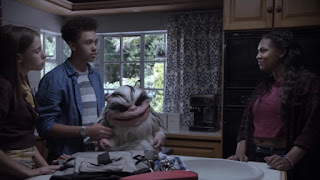 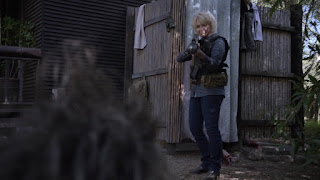 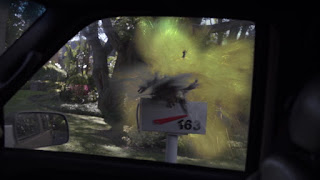 “Taste my steel you rat bastards, I have the best blades in the business.” However, even with all that said, the IMDb rating of 3.7/10 is too harsh … and yet, even for a hardcore fan of the franchise since the days of VHS rental shops and VCR-to-VCR dubbing, and for someone who actually wrote a 'Critters 5' and 'Critters 6' for English Language class in 1996 out of pure love for the franchise, Critters Attack! can only reach a 5/10. Still, though, the movie's main success is the Krites themselves – all hand-operated puppets and radio controlled practical effects. While the Krite's creators – the Chiodo Brothers – are unfortunately not involved in this project, their original design aesthetic is adhered to, even if the film makes a curious change or two along the way (why do the Krites no longer lay eggs?). Packed with fun, bloody gore scenes (much more blood than in any of the previous entries), the devious little gluttons still retain a fair bit of their nasty charm and (quite rightly) steal the entire movie thanks to the fantastic work the effects team pulled off on a tight budget. Krites get squished, exploded, bisected, and more in numerous gooey, splatterific scenes that'll make Critters fans' hearts swell with joy. A particular highlight comes when one Krite happens upon a forest ranger showering and gets mistaken for a loofah – the incredulous look, followed by the ravenous attack, makes for a genuine moment of inspiration. Still, we're a long way away from the comedic calamities orchestrated by the Krites in parts 2 and 3 at the Hungry Heffer fast food restaurant and Mrs Menges' kitchen respectively. 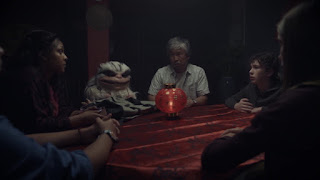 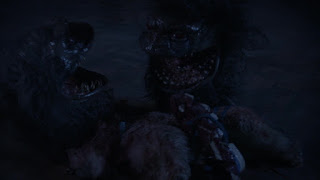 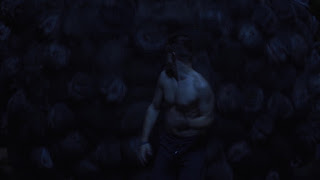 “You can drive, can't you?” / “I'm twelve.” / “Exactly.” There's a few references to the previous movies, albeit few and far between, with the biggest being the involvement of Dee Wallace – who played Helen Brown in the original 1986 movie. However, the actress isn't playing the same role here – this movie is, essentially, a reboot – but instead some sort of bounty hunter (and not of the shape shifting alien kind one would expect of a Critters flick). What's most galling, though, is that Wallace is left with not much more than a cameo spread very thinly across 85 minutes. You can find all that time to bang on and on and on about Drea's (local) college aspirations, but you can't find more than a few minutes worth of screen time for Dee Wallace?! Her involvement naturally adds cachet to the project, but her every extended absence is felt ever more keenly the further the viewer progresses through the movie. 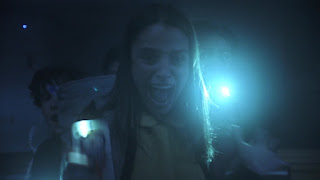 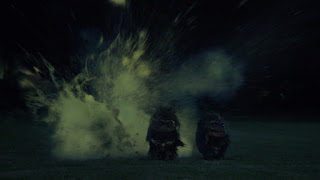 “You know aliens don't exist, right?” So, all things considered, Critters Attack! is frustratingly patchy, a hit and miss combination of mismatched (and even pointless) character drama and gleefully bloody Krite action. Perhaps an actual sequel, instead of a reboot, with more arresting characters and a slightly bigger budget would have given Critters fans something closer to what they've been longing for. The movie starts somewhat slow, and the big finale is more of a splutter than a triumphant splash, but as it stands hardcore followers of these forever famished fur balls should find enough fun to justify a viewing. 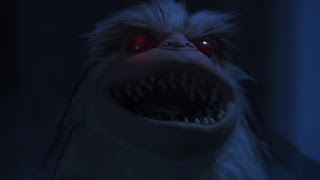 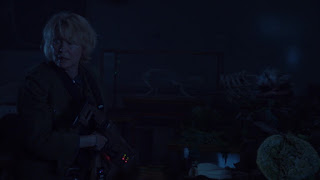 “That is gross.” The DVD has a handful of brief featurettes, all focusing on the Critter effects themselves, providing some informative looks behind the scenes of how certain scenes were shot and what went into creating the animatronic puppets. There's also a brief 'commentary' of sorts between the director and one of the Krite 'actors', which is a nice bit of fun.
Posted by Nick Thomson at 17:21