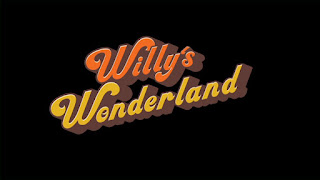 “He's not trapped in here with them, they're trapped in here with him!” Nicolas Cage goes into a full-blown 'Cage Rage' against a gang of animatronic mascots in a children's party restaurant. It's like every stressed-out parent's fantasy at a Chuck E. Cheese birthday party – to rip the head off one of those bug-eyed monstrosities during one of their maddening pre-recorded melodies...! 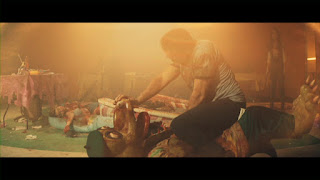 “There are chips on the coffee table and a bucket on the floor – try not to make a mess.” Nicolas Cage (Colour Out Of Space) plays 'The Janitor', a Camaro driving badass who gets stuck in the backwater town of Hayesville when his tyres are blown out by a spike strip. Apparently the work of bored teens causing mischief, The Janitor – in his leather jacket, shades, and hefty black boots – soon discovers that the repairs will cost $1,000, and Jed (Chris Warner) the mechanic doesn't accept plastic and the ATM is broken. Conveniently enough, Tex Macadoo (Ric Reitz) is willing to make a trade – a repaired Camaro in exchange for one night of cleaning at his festering restaurant Willy's Wonderland. Nothing dodgy going on here, evidently! Never mind the missing persons posters, or the chain on the door, just get to work – and so he does. 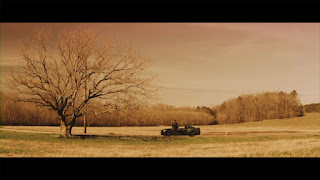 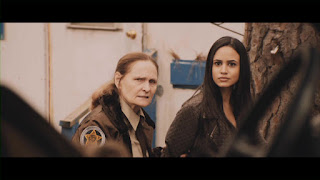 “Congratulations. You are officially on-staff!” While The Janitor busily gets on with wiping away years of grease and grime (Cillit Bang missed a marketing opportunity here!), local teen Liv (Emily Tosta, Mayans M.C.) is enrolling her friends – all traumatised as kids by the mangy mascots on-stage at Willy's Wonderland – in a scheme to burn down the restaurant with a bloody past, much to the chagrin of Sheriff Lund's (Beth Grant, Donnie Darko). Aware that Cage's mysterious Janitor is locked inside, Liv & Friends try to bust him out and enact their plan to put an end to Hayesville's deepest and darkest secret – but The Janitor ain't fussed! He's determined to do his job, chug soda pop, sandpaper his fingernails, and play pinball no matter what tries to stop him, be it wayward teens or murderous mascots! 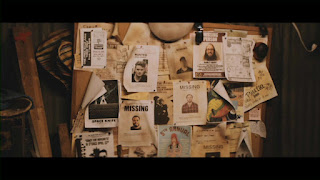 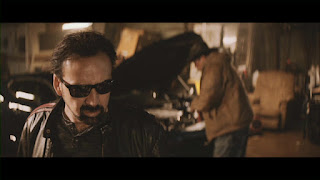 “Let's get out of here. I can't stand to hear a grown man scream.” The film's greatest strength is also its greatest weakness: Nicolas Cage's speechless character known only as The Janitor. Why so? Let's start with the strength. The most fun to be had with Willy's Wonderland is when the soda pop guzzling pinball wizard 'feels the Doom music kick in' and explodes into a primal rage of flying fists of fury as he dismembers and decapitates the various creeptastic animatronic animals. A highlight of Cage's butt-kicking good time comes early on during an encounter with Gus The Gorilla, which climaxes with The Janitor making Gus 'bite' the edge of a urinal before 'curb stomping' the gurning beastie's head. It's wonderfully silly and over the top, and it's moments like this that no doubt got the film made in the first place. Why wouldn't you want to see this movie?! But now let's consider how the film's greatest strength is also it's greatest weakness. 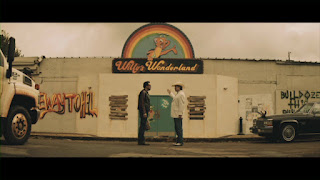 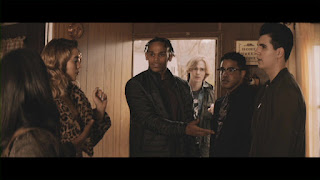 “That G.D. S.O.B.” The film wastes little time in getting underway, but in-so-doing, it abandons any hope for mystery, tension-building, and suspense. After only the first 32 minutes of the film, we've already been thrown head first into three attacks from the animatronic assailants, many of which are dispatched as furiously fast as their sudden drop into proceedings. And herein lies the aforementioned greatest weakness: The Janitor is somewhat of a male Mary Sue – a 'Gary Sue'. In 1973 Paula Smith coined the term as a character name in a satirical Star Trek short story called “A Trekkie's Tale”, satirising ultra-ideal female characters in fan fiction. The term (mistargeted and misinterpreted as often as it is on-point – and anywhere in-between) has since gone on to be a point of criticism, consternation, and controversy in pop culture discussion (if political warring, cancellation, and scattergun ists and isms can be called 'discussion' these days). The problem with Cage's character is that he's too damn capable, dispatching one maniacal mascot after another with such ease that The Janitor barely breaks a sweat or even sees anything untoward with what's happening. 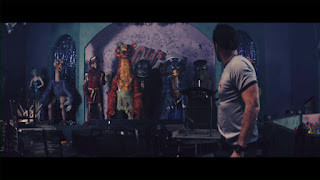 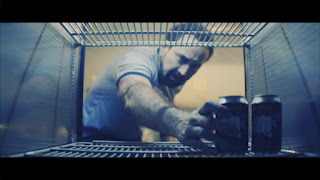 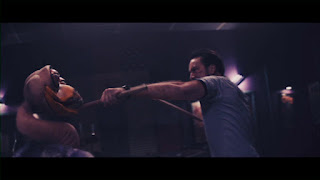 “You're hot as a pancake on a griddle and just as yummy!” Not even after the first encounter, with Ozzie The Ostrich, does The Janitor bat an eyelid at what has just occurred – an animatronic mascot from a children's fast food party joint has come to life, spoken, and sought to murder him! Apparently, this warrants practically zero reaction from The Janitor (is all this not out of the fucking ordinary?!), and so if he doesn't care – why should the audience? Until the final moments of the movie, with it's regular peaks of 'Cage Rage' having splashed about gooey gore and mangled machinery, The Janitor is never in any actual jeopardy. The towering foes get their asses kicked so swiftly and so resoundingly that every time a new battle presents itself you already know that Cage is going to have it dealt with effortlessly. Where's the tension? Where's the risk? The one time The Janitor does receive some true challenge the odds curiously flip a total one-eighty before flipping another one-eighty and reverting to business as usual. It's like The Janitor typed in IDDQD before entering the titular restaurant. 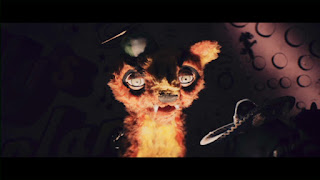 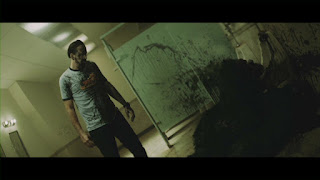 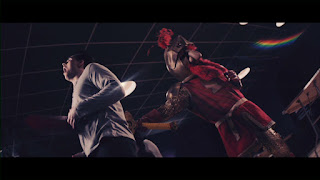 “Speaking of backwoods inbreds – where did Bob and Kathy go?” A power fantasy isn't necessarily a bad thing, and when used sparingly it can even be a great thing, but if that's all it is then all you get is a one-note flatline instead of a rollercoaster, even in tongue-in-cheek fare such as this. Even Liv, occasionally, seems nowhere near perturbed enough by the slaughtering of her friends, and so, because the main characters feel too 'at ease' with what's happening, any sense of genuine peril or challenge is considerably diminished. And so, while it's an awful lot of fun to watch Nic Cage enable his inner 'rip and tear' mode and beat down a roster of colourful mechanical animals, the movie shoots that single wad too soon and no amount of feverish fumbling can quite reignite that initial dose of insanity. 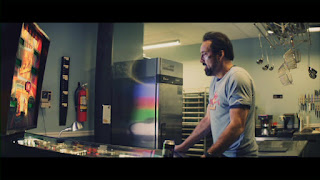 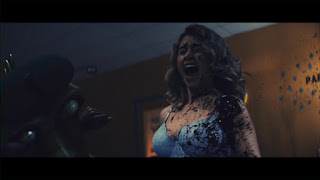 “Oh … you a freak-freak?” Major strength/weakness aside, Willy's Wonderland – written by G.O. Parsons and directed by Kevin Lewis – is undoubtedly charming with it's fondness for vibrant craziness and bloody explosions of the crimson stuff. How can you not enjoy Artie The Alligator indulging in a bit of voyeurism before launching into a teeth-gnashing, gore gushing frenzy of killer instinct? The film may occasionally slide into bouts of exposition, but the backstory to the restaurant – and it's Super Happy Fun Room – is undoubtedly creepy and leaves the viewer wanting more. Indeed, a few rearrangements here and there, and Willy's Wonderland could have weaved an unfolding mystery throughout the first half before then launching into the 'Cage match' that everyone came to see, rather than undercutting itself straight out of the gate. Sure, we generally know where this is all heading, but at least weave us a web of intrigue to draw us in – don't just thumb-it-in dry and pound away. 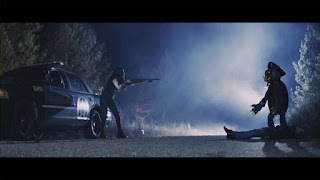 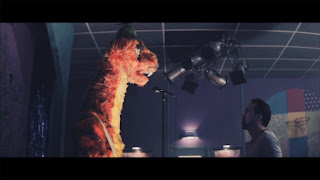 “If we don't do what needs to be done nobody in this town is safe.” It's no wonder that the film, with such an enjoyably enticing central premise, was snatched up by Nic Cage from the 'Blood List' (think the 'Black List' of hot-yet-unproduced screenplays, but for genre fare). However, despite all the big brash fun to be had, you can't help but feel there was a better designed story in there trying to get out. Still, it's undoubtedly worth a watch for fans of oddball genre flicks and Nicolas Cage smashing the shit out of stuff. Check it out!