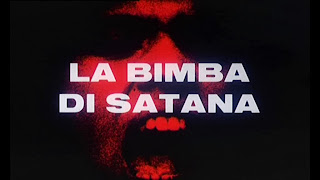 “Tender young flesh seduced by the ultimate evil.” / “When the Devil calls, she comes...” Mario Bianchi, here credited as Alan W. Cools, directed this lurid film Satan's Baby Doll, sometimes known in America as 'A Girl For Satan', mixing pornographic pleasure with possession and pain. Within the confines of the Aguilar castle, a lushly decorated tomb resting high upon an emerald hill (the same exterior in Antonio Margheriti's Seven Deaths in the Cat's Eye), the forces of evil are about to sink their teeth into some delicious revenge. 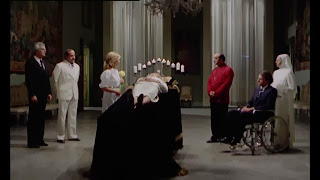 “And the dead come back and come to life again in us forever, for better or worse till the end of time.” Inside the cold stone walls of the castle, Maria Aguilar is lying in-state, surrounded by her family and servants. It's a sombre affair tinged with suspicion, even anger, as loaded glances are exchanged across her body. With the wind howling, and Nico Catanese's Goblin-esque synth score soaring, an unfortunate 'automatic nervous contraction' spasms the matriarch back into motion – terrifying her beautiful daughter Miria – a portent of things to come. 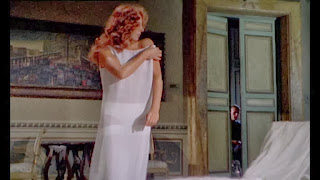 “We knew about her hysterics, but somebody else might interpret the facts in a different way.” Maria (Swedish icon Marina Hedman, The Beast In Space) was a nymphomaniac, something her husband Antonio (Aldo Sambrell) isn't best pleased about, and so he eyes every male who met her with increasingly strung-out distrust. He's an addict and a cruel patriarch, a man who believes his wealthy lifestyle earns him the right to look down on his servants with disdain, and yet his innocent daughter Miria (the delectable Jaqueline Dupré) is the only one who can melt his icy heart. 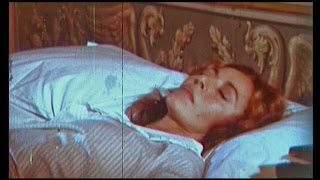 “I will save you from the damned souls!” Living with Antonio, in the cavernous excesses of this cursed castle, are his paraplegic brother Ignazio and his nurse Sol (European screen icon Mariangela Giordano), and Isidro, a general dogsbody whose superstitious belief in evil are mocked by visiting Doctor Juan. 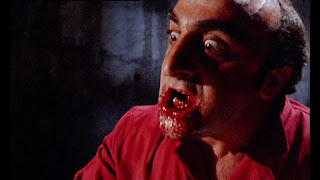 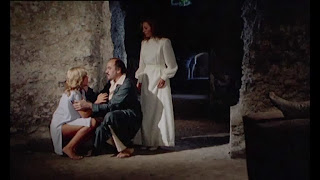 “I knew her innermost thoughts. All of them.” The family have wealth and power, but Maria's death is exposing the dark heart lurking beneath the surface. Antonio is blissed out on drugs dreaming of 'desecrating' Sol's 'temple' for he deems her to be a tempting whore, while Ignazio is in love with her – a Nun – and watches as she gets undressed, fantasising about her gratifying her own toned and slender body. 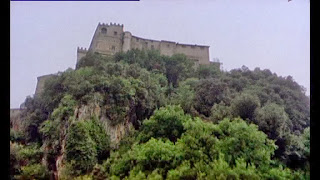 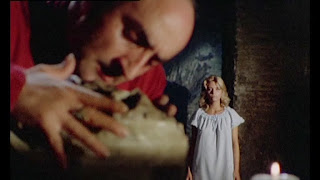 “This castle has been cursed, we shall all die.” But there's something darker rising up from the crypt beneath the castle – a spirit seeping through the corridors and stairways – as Isidro does some weird, wobbly-handed slithering about above a mummified corpse to cast away impending evil. It's all for nought though as sweet, golden-haired Miria becomes possessed by the spirit of her mother, who encourages her to seduce and kill. Mother has a score to settle from beyond the grave, but who – if anyone – will survive her lascivious wrath? 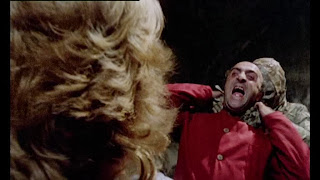 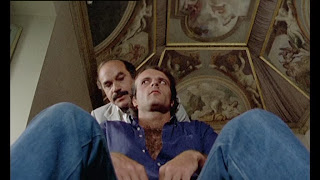 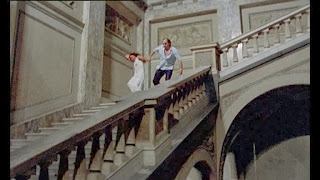 “Tell the police? Don't panic! Let's use our heads.” Of course, with this type of movie, one man's trash is another man's treasure. Uncredited cinematographers Angelo Lannutti and Franco Villa capture the grandeur of the location, often cast in stark lighting and deep hues of blue and red. Likewise, the story – if somewhat light-on-plot – has frequent suggestions of deeper thought. Here, the decadence of the Italian aristocracy is torn down along with the corruption of religion by carnal desire, as rich and poor, money and God, desire and divinity provide ample subtext. Even youth is seen to be stripped of innocence by the sins of elders. 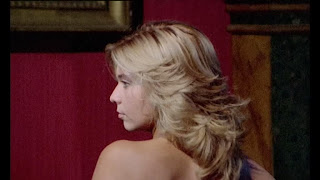 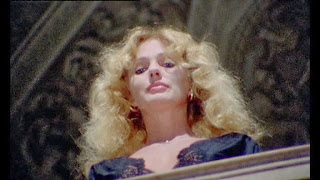 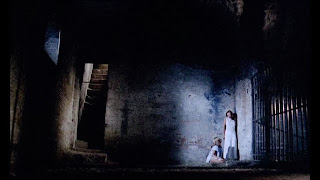 “I'd rather die than let an oily character like you stain me.” Shameless Screen Entertainment's 23rd release comes with a distinct Italian track and optional English subtitles. The quality of the print is pretty good for this kind of film on DVD although, naturally, the footage included from the 'German XXX' version is fairly rough (iffy colour, lots of damage). However, it's fun to see just how much extra footage there is and where it's placed – in a way it makes these steamier scenes more illicit. While the disc isn't exactly brimming with extras (these sorts of archive releases rarely are), what's included is mostly worthwhile. A spoiler-ific trailer, an 'alternate gown scene' (with split-screen comparison), an alternative opening sequence featuring more raunch from a scene usually found later in the film (and titled “Orgasmo Di Satana”), as well as the 'Shameless Trailer Park' – twenty-four trailers for other releases from the fan favourite distributor (clocking in at 28 minutes).

The most interesting extra though, is an excerpt from an Alan Jones & Mark Ashworth article “Diva Divina: The Mariangela Giardano Story”, which provides some interesting background history on one of the film's sultry actresses. This film is reviewed as part of the 'Shameless Sexploitation Triple Sinema Bill' box set, which also features Love Goddess of the Cannibals and The Beast In Space. The packaging is decidedly impressive, appealing to extinct format nostalgia (a reversible sleeve styled after a Betamax tape), as well as a gorgeously gaudy yellow box boasting typically lurid artwork by Rick Melton, which is revealed in its uncensored form when you slide out the DVD case.
Posted by Nick Thomson at 17:55