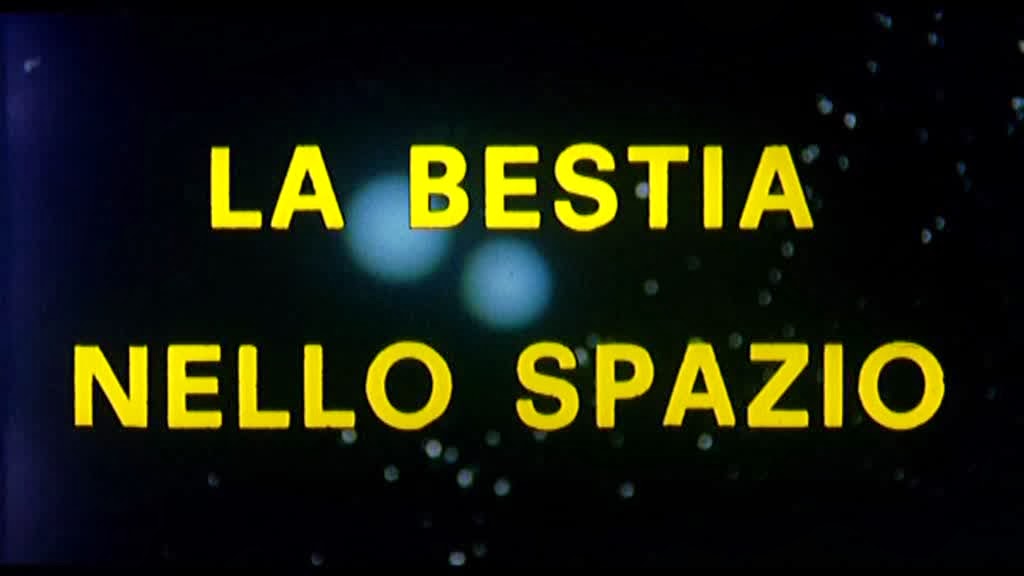 “In space no-one can hear you come...” Under the pseudonym of Al Bradley, director and co-writer (with Aldo Crudo) Alfonso Brescia's post-Star Wars intergalactic sexploitationer has to be seen to be believed. Absolutely defining the term 'trash cinema', The Beast In Space – a semi-sequel to Walerian Borowczyk's 1975 art house grot flick The Beast – is a bizarre and scatterbrained odyssey of diffused lighting, gaudy design, and flesh-jiggling distraction. 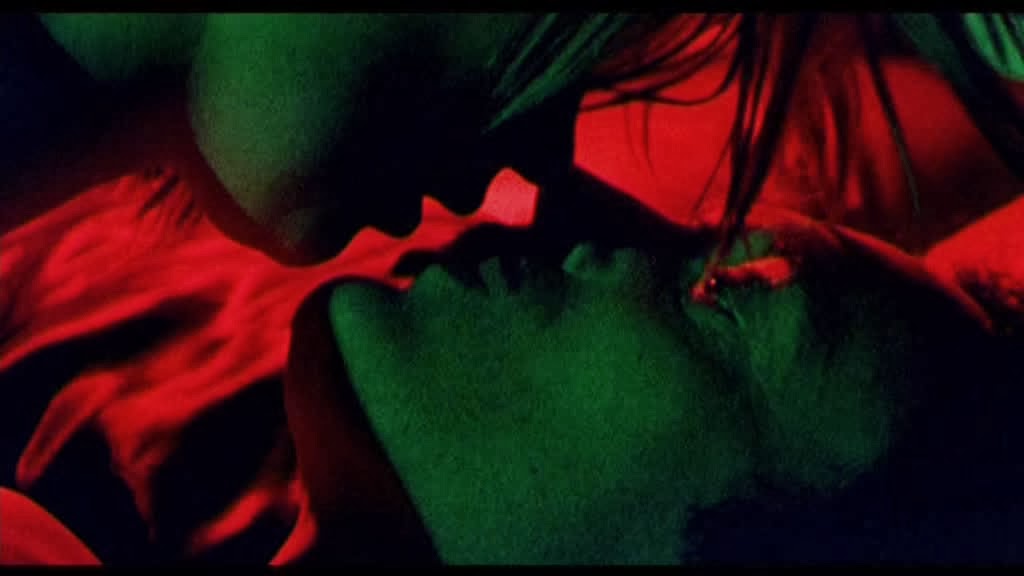 “Don't break my asteroids!” In 1977 the Star Wars phenomena exploded onto silver screens across the globe and comprehensively changed the cinematic game with it's space saga wow factor, that captured the hearts and minds of generations of movie fans. In its wake came a slew of cash-in flicks produced on-the-cheap, churned out with fervent, money-chasing hysteria. One such film to take great inspiration from the Star Wars boom was Brescia's The Beast In Space, a softcore space actioner. 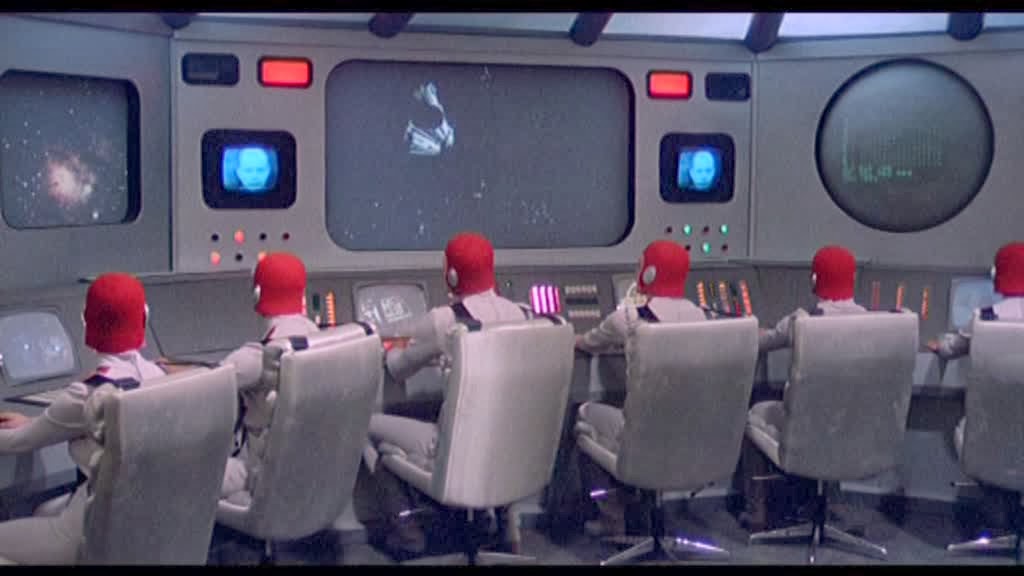 “I always have strength for that, do you want to go upstairs?” Beginning in a colourful space bar in the 'Vega Sector', filtered to within an inch of its life with hazy diffused lighting (rich reds, greens, and yellows mostly), Captain Larry (yes, Larry) Madison (Vassili Karis) returns from his latest voyage in search of nocturnal delight. Ordering up a 'Uranus Milk' (seriously), he sets his sights on Sondra (Sirpa Lane, Love Goddess of the Cannibals, The Beast), decorated with swirls of glittery make-up, but first he has to do fisticuffs battle with poor man's Han Solo-alike Juan Cordosa (Venantino Venantini, Cannibal Ferox). 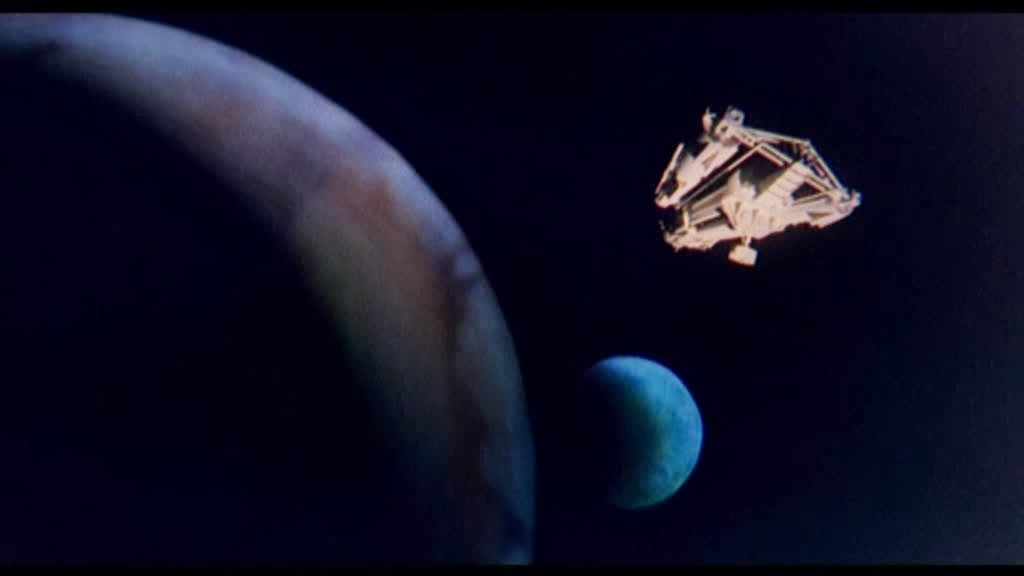 “The situation is getting critical.” Successfully bedded, Sondra experiences a terrifying recurring nightmare in which she's chased through a forest by some kind of hairy man-monster intent on invading her inner space – not that Captain Larry gives a stuff, he falls asleep when she tells him all about it. What's of more concern to him – and the galactic fleet – is a phial of 'Antalium' that was discovered after the fight with Juan. Antalium is a powerful metal used for neutron weapons, so rich that a single kilogram could provide power for a million years … but where did this sample come from? 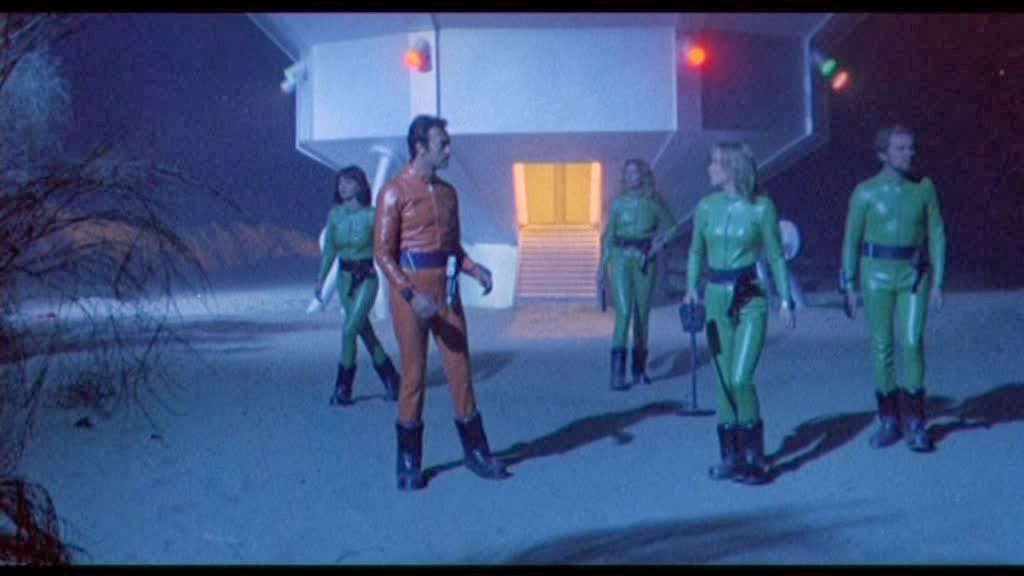 “The MK31 will enter unexplored space in half a minute.” Charting a course for Lorigon – a planet heretofore unexplored by man (so they think, at least) – Captain Larry meets his crew, including radar operator Frieda (played by Marina Hedman, under the guise of Marina Lotar) and route officer Sondra. One painfully obvious model shot blast-off later (in which the thrusters are, literally, a single sparkler inside a low-detail plastic space ship), our intrepid band of space explorers head for Lorigon, hoping to beat money-hungry Juan (in his scrappy plastic flying saucer) to the punch. 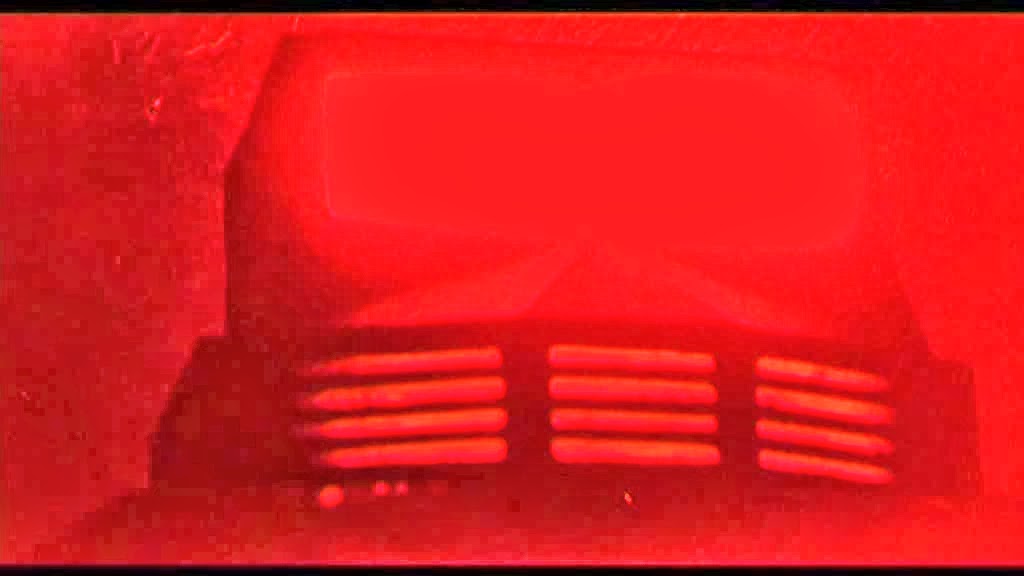 “The base is more likely to award a medal in our memory than to send a rescue ship.” But damn and blast – they get into a deep-space tussel with Juan and go spinning out of control – however, with some 'spacey sounding' direlogue chucked about for a few minutes, they find themselves safely landed on their destination planet. Bravely embarking into the unknown territory of a sand-dusted film studio floor, and a rather familiar-looking cave system (seen in Satan's Baby Doll certainly, and possibly Seven Deaths in the Cat's Eye also), the crew go in search of the source of the Antalium signal. 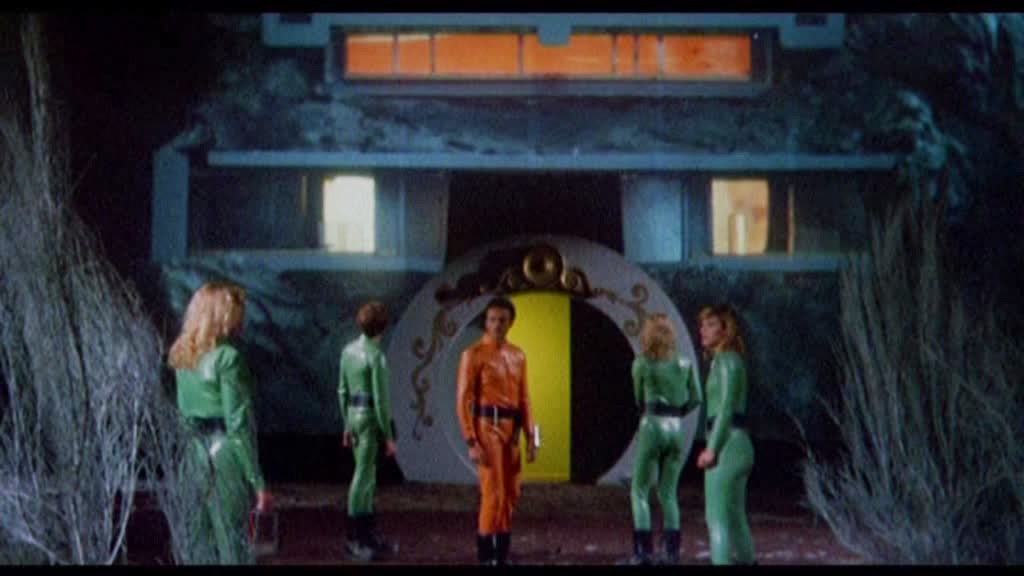 “Strange … I feel a torpor inside me.” After a bizarre interlude where the crew encounter rough-as-a-badger's-arse stock footage of two horses mating (by an Earthly stable) and get thoroughly turned on (!!!), they stumble upon a grand castle where they find themselves the guests at a grand banquet. Their host is Onaph (Claudio Undari, credited as Robert Hundar), the hairy ravager from Sondra's dream. As if we've not suffered through enough expository dialogue, we're given the run-down on Lorigon, which is attended to by 'the Golden Men' (who look like Buck Rogers rejects) and controlled by Zocor – a super-powerful and ancient computer that runs on Antalium, with a voice like an Italian Dalek and an aversion to free-will. 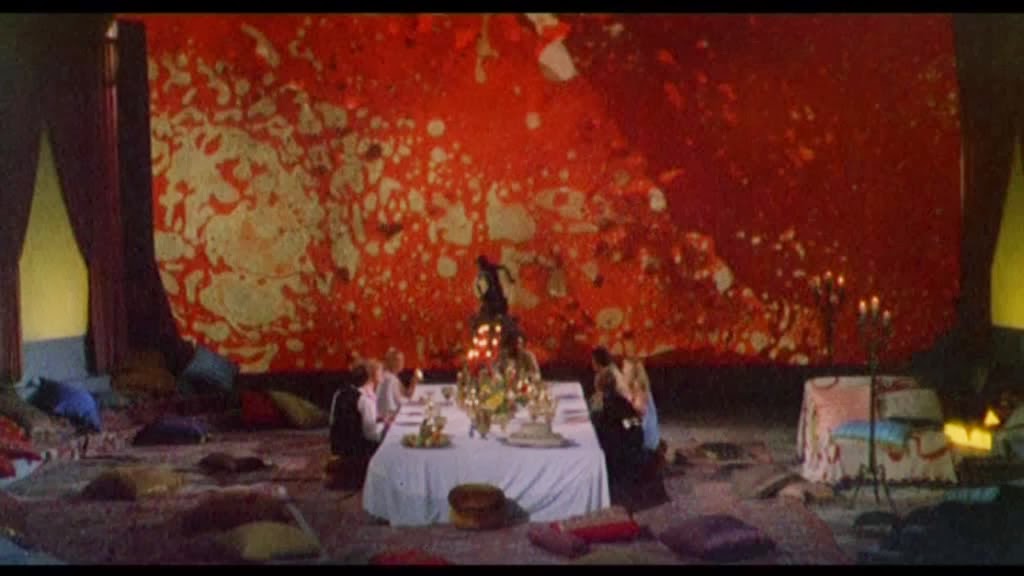 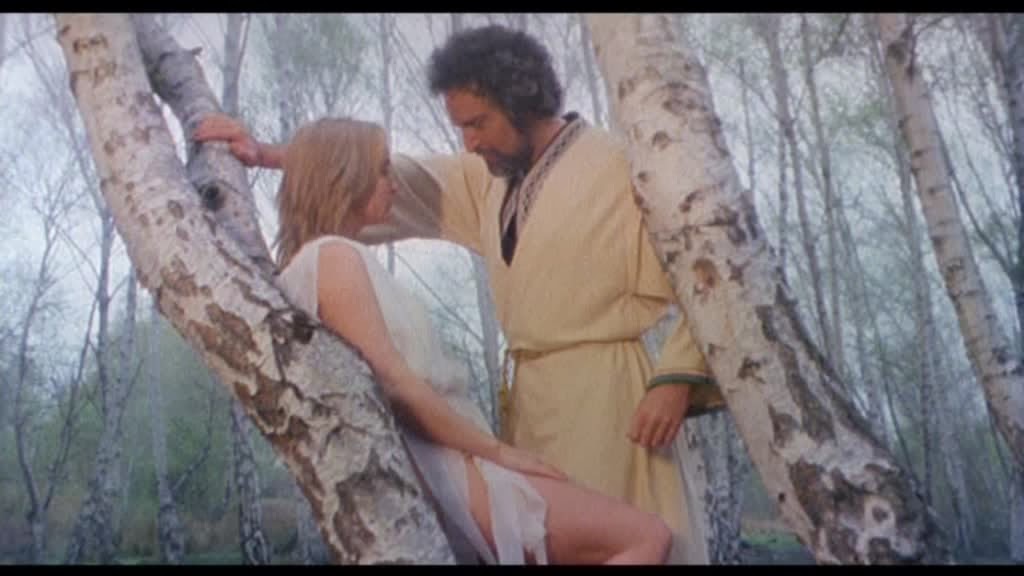 “I feel slightly dizzy, but it isn't unpleasant.” Brescia and company stretch the pocket money budget to admirably far and wide extents. It might be quite funny when the bar set starts falling apart when Larry and Juan throw each other about, but the use of rear-screen projection gives a crafty – if chintzy – sense of scale (the castle) or tripped-out background dressing (the banquet hall). Likewise, casting much of the film in otherworldly deep hues of blue, red, and green give the film a unique look that counterbalances the low budget contrivance of Lorigon's exterior looking remarkably like some Earth-bound woodland not far from the film studio. The costumes, too, provide ample fun, from the grey onesies with red caps, to Sirpa's delightfully revealing shredded gown. 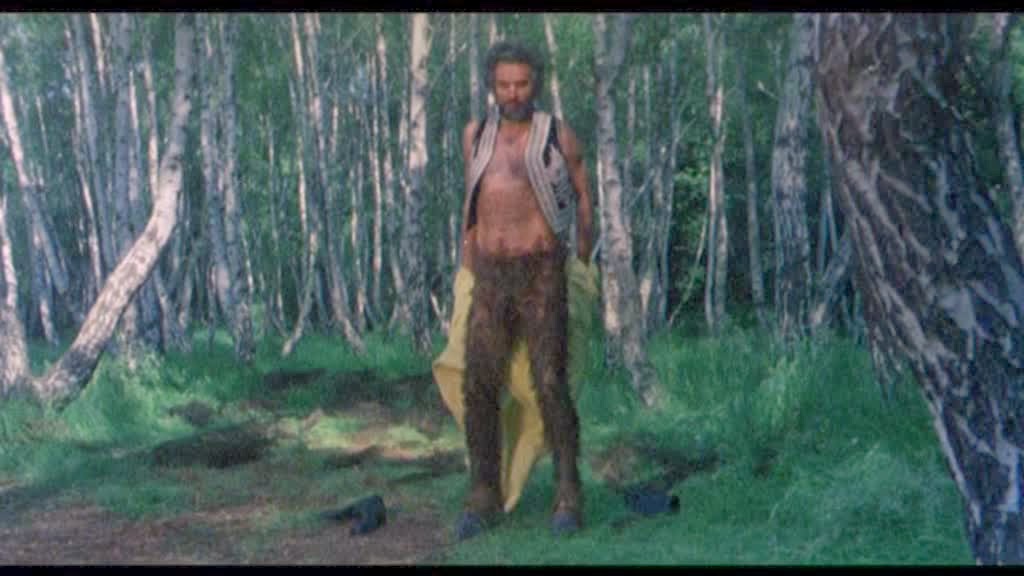 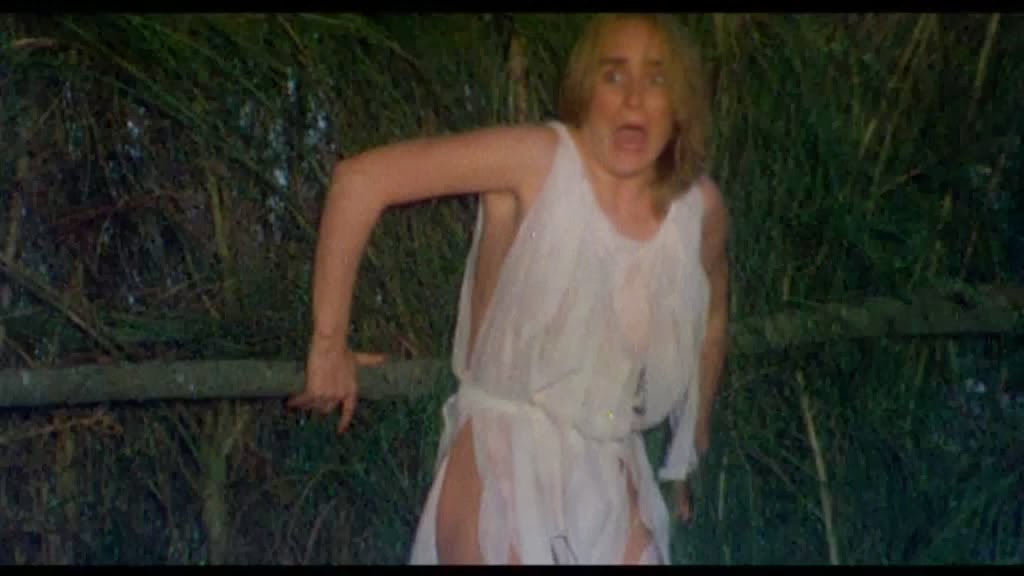 “Zocor has absolute power over our minds.” The pacing of the film, on the other hand, is less than impressive. Clocking in at an hour and a half it feels far-too bogged-down in iffy operational dialogue – there's so many scenes inside Captain Larry's space ship where we see the crew roll off reams of 'spacey' exposition. If only they had chopped out much of the up-front faffing around in the first hour, and yet you can't blame them for trying. We get PVC spacesuits (minus helmets, because Lorigon's air is conveniently breathable), command centres (watch the background extras listlessly press random buttons), space ships (see the fishing wire retract the hatch), other worlds, a super computer, and even an armoured robot doing some up-close menacing of the crew. 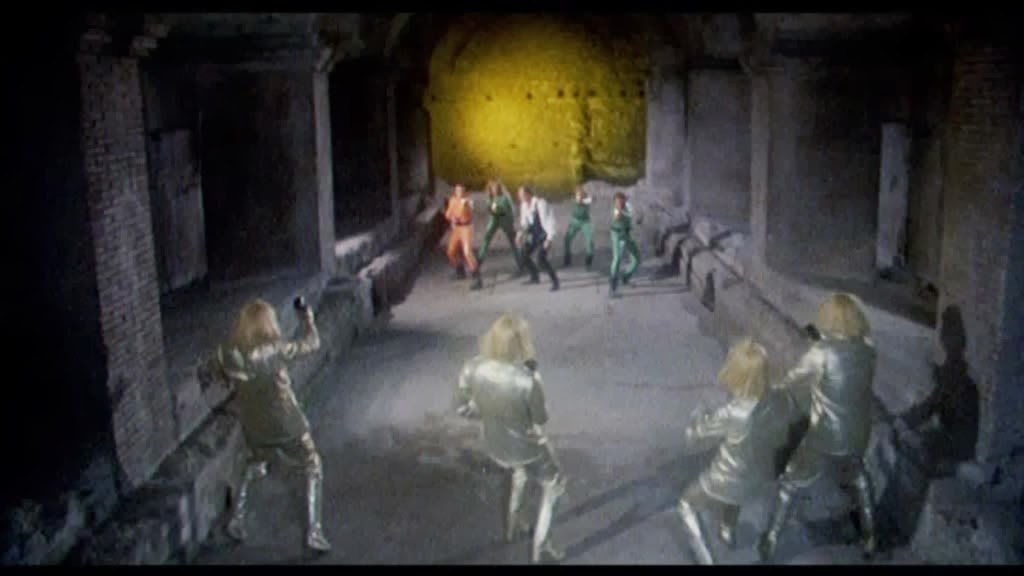 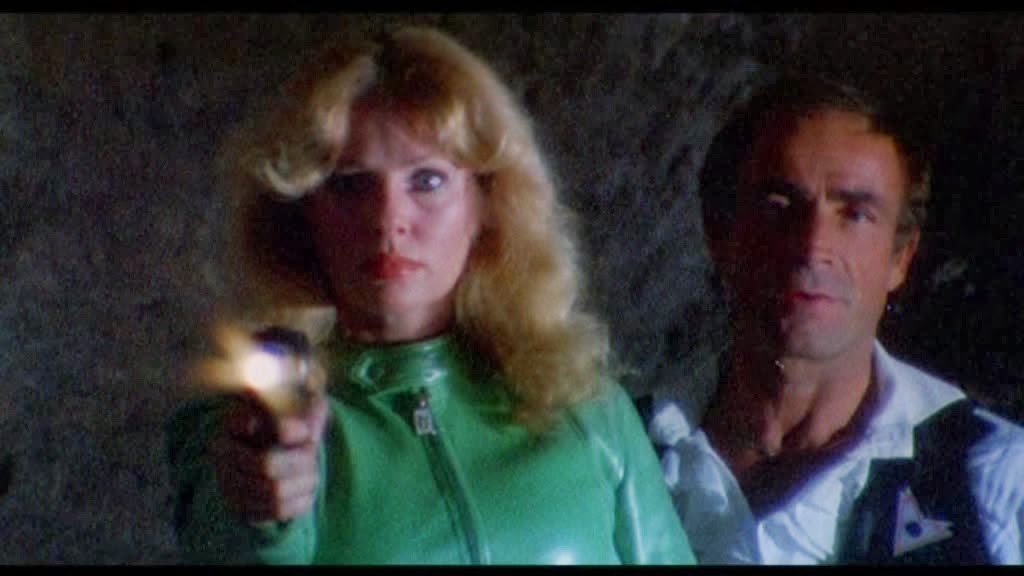 “Listen, darling, what you think was a dream has actually happened!” Of course, such sights are all cobbled together – the armoured robot is almost exclusively seen from the shoulders up, bar a pair of wide shots where a child's toy takes its place – and the sound sync is, at times, woeful. Entire conversations will be had when people aren't moving their lips, with deafening silence as their mouths flap wildly. However, such crudeness is part of the appeal, and the film is scored with gleeful intergalactic abandon by Marcello Giombini (using the name Pluto Kennedy). 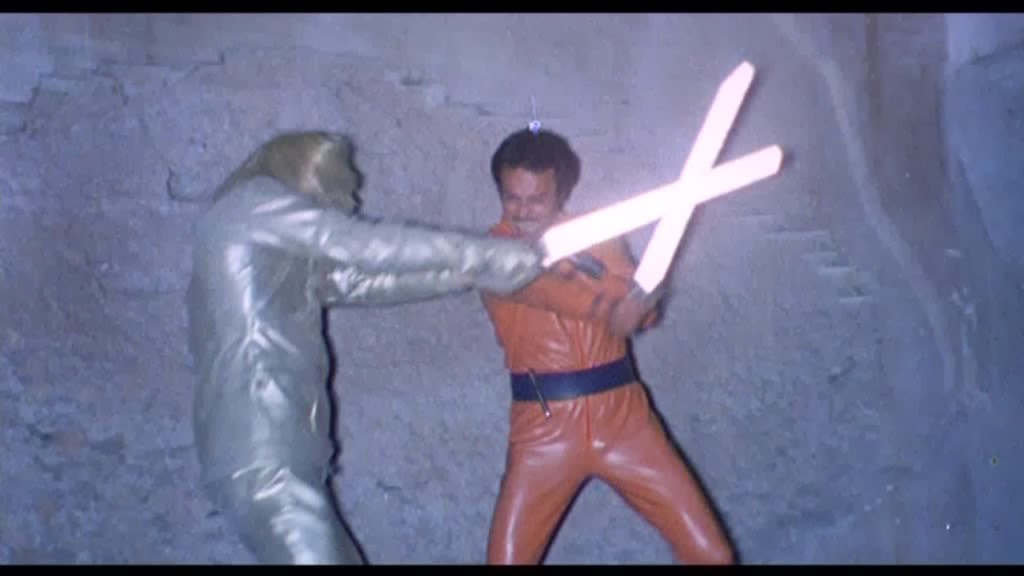 “It's like I'm feeling continuous vibrations in my body.” Naturally, the film doesn't skimp on skin, although it is entertaining to glimpse an insert boob shot that never matches the lighting, nor the position of the actress. This cut of the film features 'hardcore' footage of the titular bad guy's gargantuan johnson – which comes and goes as the film happily cuts between both 'soft' and 'hard' versions of the film's iconic (for lack of a better word) scene. Thank heavens this movie isn't in 3D! 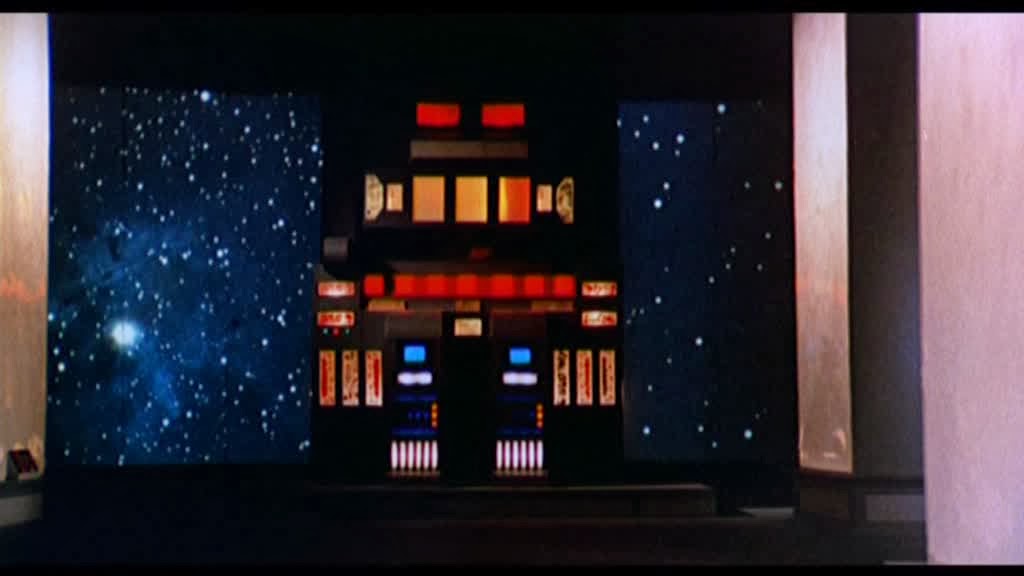 “Life on this planet is so boring.” Featuring laser guns (minus the lasers), light sabres, robots, and a rather unfortunate shot of a man's astonishingly hairy arse, The Beast In Space is an utterly bonkers movie. This is like the inspiration for a spoof, cutting haphazardly between wibbly-wobbly sex scenes and ropey special effects. It's a shame that the plot is so threadbare, and almost disregarded entirely at times, as the beautiful Sirpa Lane isn't given an awful lot to do. A decidedly mixed bag sure, but it's so whacked-out that trash cinema connoisseurs will survive the slack pace and half-boiled plot for the goofy tone, leery nookie, and budget action. 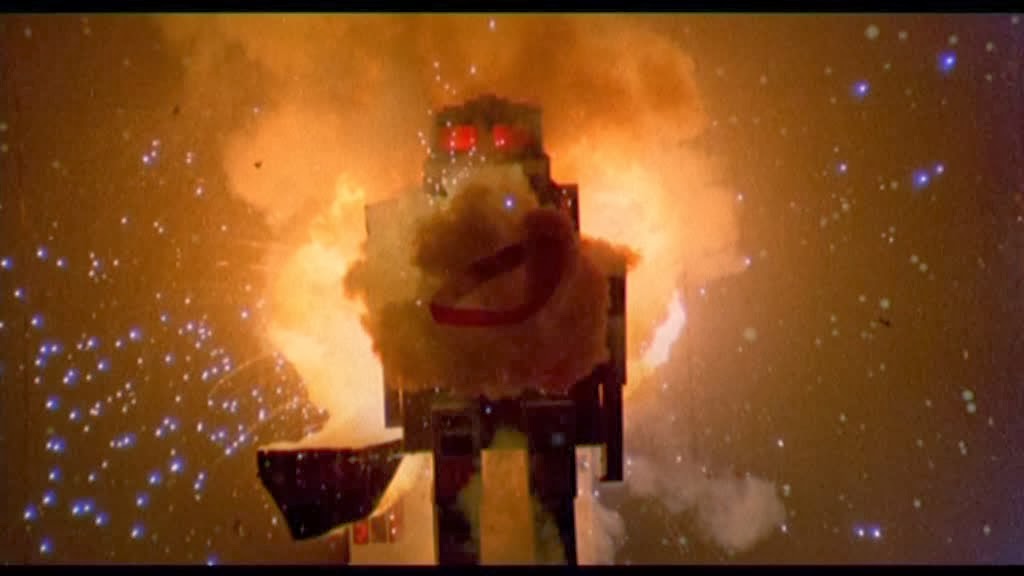 “I was expecting something more threatening.” Shameless Screen Entertainment's 24th release isn't exactly pretty. The print is grainy and – because of the way it was filmed – awfully soft focus, and despite the random out-of-sync moments, the Italian track (with optional English subtitles) is good enough to hear all of that sci-fi gibberish hurled towards you at warp speed. Extras wise there's not much of anything – just a trailer for the film, the 'Shameless Trailer Park' (twenty-four trailers for other releases from the fan favourite distributor clocking in at 28 minutes), and a softcore/hardcore comparison of the beastly boner scene. This film is reviewed as part of the 'Shameless Sexploitation Triple Sinema Bill' box set, which also features Love Goddess of the Cannibals and Satan's Baby Doll. The packaging is decidedly impressive, appealing to extinct format nostalgia (a reversible sleeve styled after a Betamax tape), as well as a gorgeously gaudy yellow box boasting typically lurid artwork by Rick Melton, which is revealed in its uncensored form when you slide out the DVD case.
Posted by Nick Thomson at 17:23