You know what movie should be remade? Drive-In Massacre... 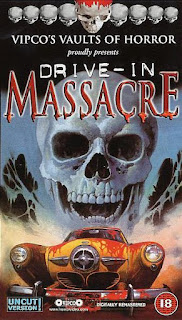 Remakes. They've been dime-a-dozen for years, and the success rate isn't exactly high. Generally they've brought in box office bucks, but money doesn't equal quality – nor genuine purpose. The problem with remakes remains thus: beloved icons of cinema history (some of them bonafide franchises unto themselves, many of them within the horror genre) are re-heated to simply trade on an established name. Cynical business sense in abundance, but artistically and from a fan's perspective, it's frequently devoid of true merit. Add to this the fact that we horror fans possess a particularly potent brand of curiosity, a curiosity that convinces us to spend money to see these remakes simply to see how they compare to the original films, even though the result is typically that the original remains to be the best. Remakes today almost never produce a greater film than the original.

A quick perusal of my DVD and Blu-Ray collection that's weighing down my walls, reveals numerous examples of films that have been remade, of films that are themselves remakes.

Some of these remakes are decent (or even pretty good), but simply don't touch on the power and status of the original films. Night of the Living Dead 1990, Halloween 2007, and The Texas Chainsaw Massacre 2003 are all examples of this level of the remake strata.

Far below that we have turgid and even quite cynical rehashes, such as Dawn of the Dead 2004 (vapid, devoid of intelligence, all mouth and no trousers), Day of the Dead 2008 (no, just no), The Fog 2005 (again, no, just no), A Nightmare On Elm Street 2010 (a poorly paced and pale imitation of the film that gave life to New Line Cinema, cobbled together from badly executed sequences pinched from Craven's original), and The Thing 2011. The last one is technically a “prequel” (and a pointless one at that as we know exactly what will happen to the Norwegian camp), but it attempts to re-tread John Carpenter's 1982 footsteps so often (while completely ignoring the alien's modus operandi in the process) that it's clearly a remake that wants to hide inside an imitation.

Click "READ MORE" below for more remakes, and why Drive-In Massacre would be a worthwhile candidate for another going-over.


Then you have your in-betweener remakes that aren't utter tosh, but they're not memorable either. Friday the 13th 2009 … certainly not turgid, but it unwisely looks and feels far too much like TCM2003, and has the strangest pacing, as well as a very uneven hit rate. Night of the Demons 2010, My Bloody Valentine 2009, 2001 Maniacs, and The Amityville Horror 2005 are just some of a much larger number of these forgettable endeavours.

However, there are rare examples where a remake brings something better to the table, or at least comes out on-par with the source material. The Crazies 2010 does some things better, and some things worse, than it's 1973 counterpart, resulting in a very solid horror outing that trades some of Romero's intelligence for the scale he simply couldn't achieve on the original's minuscule budget. The Hills Have Eyes 2006 takes Wes Craven's decent 1977 shocker, and gives the third act a much-needed revamp for-the-better. Piranha 3D (2010) was surprisingly good fun with fantastic gore, and The Toolbox Murders 2004 took a decidedly shoddy low budget slasher (which only had 30 good minutes in it) and gave it much-needed structure. However, these are a mere few glimmers of hope in a vast sea of many wastes of cinematic time.

This handful of examples off the top of my head (and just within the horror genre alone) gives you the picture. Surely the point in doing something again – in remaking a movie – is that you take something that didn't work the first time around, but which had potential (squandered by a lack of talent/skill/budget/style/etc), and you make a superior new version of it.

This brings me to Drive-In Massacre (Stuart Segall, 1977).

The year is 2003, and in a naïve consumer decision I spent £20 – yes, twenty-ruddy-quid – on the murky 2001 Vipco release, simply because the cover art was fantastic. A hellish skull looms large over a blood-splattered car – a vivid image indeed, the sort of image that was frequently used to lure naïve punters in to see iffy movies. The flick itself, taking place pretty much over three locations, suffers from the harsh restraints of a cheap production, a slim story, and therefore not enough content to really fill the 70 minute running time. This all said, I've always had a bit of a soft spot for it (and I belong to a generation and country that hasn't experienced drive-in cinema). As such – the title, and what it could stand for – would produce a remake with some actual purpose behind it.

Take the now almost extinct culture of the drive-in film-going experience, place it in a period setting (either late 1970s or early 1980s), have your protagonist get a job at the drive-in itself (to act as a guide for the uninitiated audience members), and play-up the sense of nostalgia for the open-air drive-in experience. Combining an array of colourfully sleazy side characters based on some of those in Segall's movie (exhibitors who would re cut movies to make their own versions, so they could double-dip their fingers into their customer's wallets, for instance), with modern filmmaking techniques and flair, and you could create a gruesome ode to the heyday of the slasher flick, and this bygone era of cinematic history.

As I once again scan my movie shelves, I see no point in remaking the likes of Axe (1974), The Burning (1981), Henry: Portrait of a Serial Killer (1986), The House on the Edge of the Park (1980), Madman (1982), Motel Hell (1980), Pieces (1982), Slumber Party Massacre (1982), or any one of a series of cannibal, giallo, or euro-zombie movies. Their quality varies, but a remake of any of them (and myriad more) would either bring nothing fresh to the table, or produce yet another inferior re-do. Providing, of course, that there aren't already remakes of any of these already in-the-works that I don't know about.

If you're going to remake a movie, remake one that stumbled the first time around, and come out the other side with a great product. There's potential in this old flick … perhaps I'm the only one who sees it, and perhaps I'm merely one of a limited number of people who have even seen it, but I stand by this assertion which I have maintained since I first saw it. You could make a really cool low budget, period-set, nostalgic slasher with the basic ingredients afforded by Drive-In Massacre.
Posted by Nick Thomson at 19:08