"Cold Shadows" - and so begins the next new script...

I recently spent the first couple of weeks of February doing a final polish on Eyes In Your Window, in advance of entering it into a screenwriting competition (I've now submitted it, so wish me luck) - as such this delayed me a little bit in getting onto my next screenplay, however this turned out to be a good thing. It afforded me time to work out a couple of kinks that needed addressing, and I was able to enact a few newly discovered screenwriting tips (hence the aforementioned final polish for EIYW). 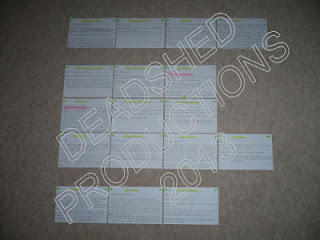 The layout for episode one.

Now though, the new 'next script' is underway - "Cold Shadows" will be a post-watershed television drama series, with a planned layout of six episodes for the first series (and basic ideas in place for what territory series two and three would cover). As is the case, you write the first episode in-full, and then provide a basic rundown of the remainder of the series to give the reader an idea of where it's all going to go.

The first episode of "Cold Shadows" is titled "Uncertainty".

Click "READ MORE" below to see a teaser sample from page one of "Cold Shadows"...

The idea is to reconfigure an iconic area of genre storytelling that has gone mostly unchanged for decades, while fitting it into a present day British setting. A bit cryptic, I know, but there we are.

Today I made a start on the screenplay for this new project, and as is usually the case it takes a little bit of getting into in order to find a pace. It's like trying to speak without knowing the right words at first, but once you've spent twenty minutes struggling to get a paragraph down, you suddenly shift into gear and the scene in your head begins to flow through your fingers. 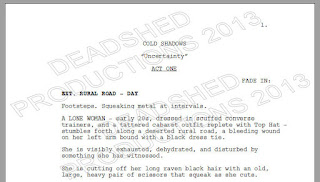 A brief first draft sample from page one.

The above is part of a scene that came to me in a session of playing the "What If Game". I sat there quietly until an image sprung into my head, and then I thought to myself "what if..." about what other details this image told me, where it was happening, how it was happening, who was in it and what was happening to them, and gradually small details emerged. These details weren't modifications of ideas, these were images and ideas as they came immediately into my head - no censorship, no discarding, just writing down everything that popped straight into my head. That was a few months ago and I ended up taking portions of that sketched-out scene and incorporating them into the beginning of "Cold Shadows". It's an interesting and fun way to drum up ideas - try it out sometime.

I'll continue to update regarding the progress of this new script as-and-when.
Posted by Nick Thomson at 17:25