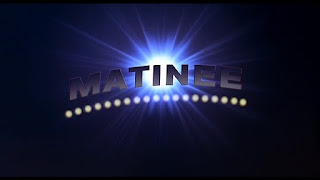 “Mant! Half Man, Half Ant – All Terror!” Piranha, Gremlins, Innerspace, The 'Burbs, Gremlins 2: The New Batch, Small Soldiers – chances are you've seen one or all of these Joe Dante films – but what about his 1993 ode to B-Movie showmanship Matinee? Picture the scene: the year is 1962, the location – Key West, Florida – and the Cuban Missile Crisis has struck fear into a nation. Paranoia is rife, if it's not reds under the bed then it's the shared nightmare of an invading bomber dropping Atomic destruction from the skies. This could be the last weekend of their lives – so there's nothing left to do other than hit the Saturday matinee showing of a brand new monster movie, in which atomic radiation and a bite from an ant turn a shoe salesman into a giant, rampaging … Mant! 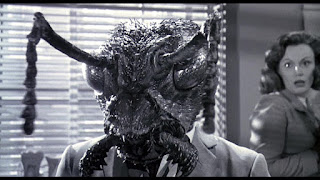 “Everybody's scared – everybody in the world.” Inside the confines of the one-screen Strand Cinema, monster mad Gene (Simon Fenton, The Bill, Grange Hill) and his little brother Dennis stare in awe at a preview trailer for “Mant!”. Introduced in a majestic silhouette profile – giant cigar billowing smoke as the camera creeps forth – is “the screen's No. 1 shock expert” Lawrence Woolsey (John Goodman, Roseanne, The Big Lewbowski), the film's cross between Alfred Hitchcock and William Castle. Captivated, Gene and his little brother (who peers in fright through his fingers) leave the cinema in a youthful daze – they've got to see this movie and nothing is going to stop them … except, perhaps, nuclear annihilation. 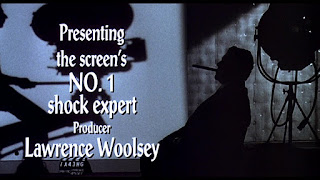 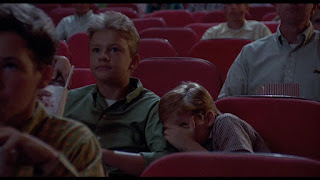 “Yes, the atomic bomb is terrible, but more terrible still are the effects of atomic mutation.” Alienated from the town and his high school peers, Gene is a child of the US Navy – and his father has just shipped out as the Cuban Missile Crisis escalates. Cutting into the scheduled television programming, President Kennedy informs the nation of the seriousness of their collective situation – the quiet terror written across the faces of Gene and his mother says it all. The end is nigh and they're all on the knife edge waiting to tip into oblivion. This is the era of “Duck and Cover!” drills in school, where every plane flying overhead could be the one to blow them all to smithereens – these young kids' lives could be over before they've had a chance to live. 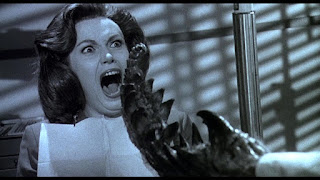 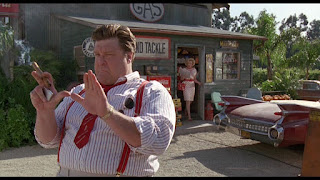 “You think if the bomb were about to fall she'd do it with me?” The high drama of the socio-political situation aside, this is a coming of age comedy. Gene strikes up a friendship with Stan (Omri Katz, Eerie Indiana) – Stan's got the hots for Sherry (Kellie Martin), and Gene's attention has been drawn to Sandra (Lisa Jakub, Independence Day). Sherry's the pretty-in-pink blonde goody-two-shoes – but she's been hanging out with poet-cum-greaser criminal Harvey Starkweather (James Villemaire) – while Sandra is the socially conscious ban-the-bomb protesting offspring of her hipster parents. If they're all going to die any minute (the beach has been militarised with surface-to-air missile launchers), they might as well have dates for the Saturday matinee. 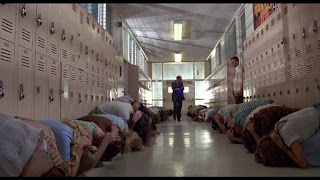 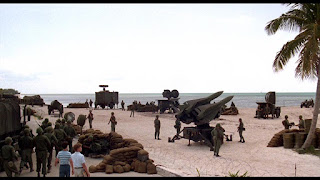 “Boy, this business has changed … I used to settle these things with violence.” Meanwhile, Lawrence Woolsey and his long-suffering actress/partner Ruth Corday (Cathy Moriarty, Raging Bull) are in town for a very special screening of “Mant!” at the Strand. He's broke, but a terminal huckster, and this one is going to be big because he's got a host of gimmicks lined up to scare the pants off his willing audience. The bomb might be about to drop, so this is the perfect time to première “Mant!” – “This war stuff spooks them, then we come in – POW! The main event!” he says, proudly. Will the cinema goers of Key West get a good scare, or will they be wiped out by mutually assured destruction? 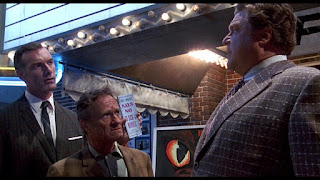 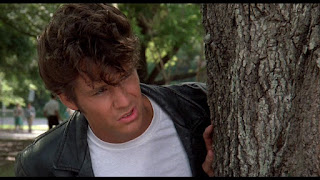 “This guy Woolsey, his pictures are all the same – a cheap, sick thrill for a bunch of hop-headed teenagers.” Written by Charlie Haas and Jerico, Matinee nonetheless has Joe Dante written all over it. Gene is a stand-in for the director – his movie posters, drawings, and collection of Famous Monsters magazine are all Dante's own – and the director's love of B-Movie cinema is writ large here. Having grown up with low budget shockers and kicking off his career cutting trailers for Roger Corman, Dante's movie-within-a-movie “Mant!” feels exceedingly authentic. The music (including needle-drops from classics of 1950s atomic cinema), the bold and swooping titles, the hammy acting, and the black & white photography (lovingly recreated by John Hora) scream the film's infectiously nostalgic intentions from the rooftops. 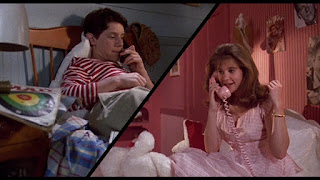 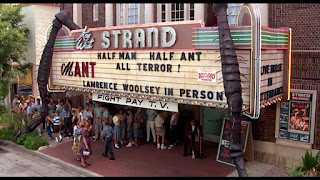 Quite possibly his most personal film, Dante pursues a message of positivity in the face of adversity – the world might eager to waste itself, but the schlock-horror monster pictures of the time were the release valve for the public. Like all great genre films they acted as a cathartic exercise in regaining control of your very real fears. In many ways the message of Matinee, which was a bit of a commercial flop in 1993, has now become relevant again. As low budget genre films have exploded across our screens once again in the wake of Rodriguez & Tarantino's Grindhouse, the human race at large face the fears of international terrorism, social upheaval, and political paranoia. As real-world politicians evacuate the centre ground (condemning the silent majority to one maddening policy statement after another), and censorious web-watchers seek to destroy lives because someone they've never met said something they don't like, audiences flock to cinemas to witness superheroes setting the world to rights. Matinee's message, extolled by Woolsey in his more rapturous moments, of 'everything is gonna work out in the end' is needed now more than ever. 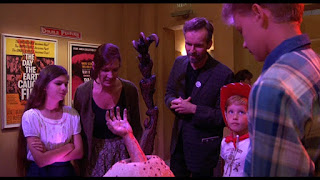 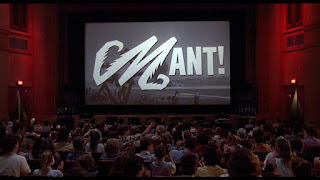 “Now they got bombs that'll kill a half a million people, nobody's had a good night's sleep in years – so you gotta have a gimmick, something a little extra.” Indeed, for all the film's glances to the past, more than twenty years on there are subtly satirical new layers to be discovered here. Sandra's hipster parents, with their fretting over what is the most 'right-on' thing to do, say, and think, are weirdly retro-prescient for the 2010s age of the ultra-PC whingebags obsessed with getting offended on everyone else's behalf. The insecurity of their middle class academic minds, when faced with a furious protest by Citizens For Decent Entertainment, shows up how easily anyone can be swayed by a convincing loud mouth. In many ways it seems like only the monster movie fans have it figured out in this picture. Woolsey's unbridled love for the power of cinema to lift the burdens of life from the shoulders of the public speaks of a belief that, serious stumbles aside, mankind always figures it out in the end – a stark contrast to the other adults in the film. 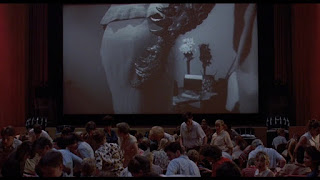 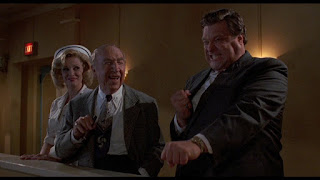 “They tell you put your hands behind your neck and they keep building bombs.” The townspeople are panic-buying and getting into fights over the last box of cereal, Gene and Stan's mothers are paralysed with fear (stay within seventeen minutes of home and don't look at the flash!), while theatre owner Howard (Robert Picardo, Star Trek Voyager) surges with barely contained paranoia. Constantly plugged-in to government broadcasts, Howard's even got a nuclear bunker built in to the foundation of the Strand cinema with room enough for him and his goldfish. However, when the screening of “Mant!” gets out of hand – seat buzzers and 'rumble-rama' tricks all firing – the foolishness of his uncontrolled fear comes like a call for everyone to just calm down and take a breath. Even the teachers at Gene's school are trapped within ignorance (three portions of red meat a day, kiddies) and lies (sure, you can survive a nuclear strike, because won't that be fun?!). 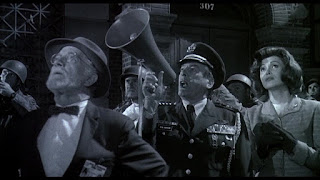 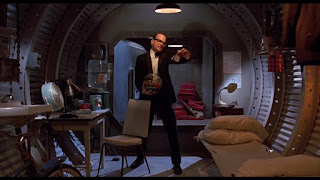 “I feel I should warn you – the story of Mant is based on scientific fact – on theories that have appeared in national magazines, yes, these terrible events could happen in your town, in your home, and they will happen in this theatre in Atomo Vision, the new motion picture miracle that puts you in the action.” And what about Matinee's biggest success? “Mant!”, the movie-within-a-movie, is a sheer joy to watch. Littered with goofy lines – some of them plucked directly from the very films it is spoofing – and low budget-like effects that riff on films such as The Fly and Them! (there's even a cameo from Kevin McCarthy), it tingles all the right zones in a film fan's mind. Indeed, Matinee is a love letter to a bygone era of film-making and theatrical exhibition, boasting Joe Dante's deft balancing of the light and the dark – after all, this is the man who made putting a snarling gremlin in a blender fun for all the family. Deeply layered throughout and comical in a variety of ways, Matinee is a heartfelt good time. 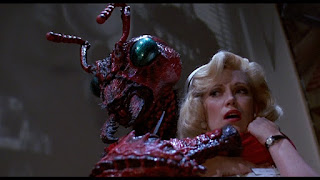 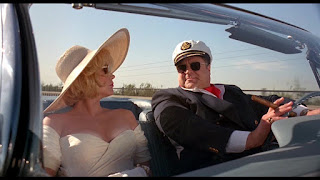 “Insecticide?! Where?!” Arrow Video's 2016 two-disc Blu-Ray/DVD breathes new life into Joe Dante's lesser-known gem with an absolutely stellar visual presentation – which still preserves that lovely grain of celluloid – and a lossless stereo audio track. Extras-wise the only thing missing is a commentary, otherwise you get a solid selection that includes: interviews with Director Joe Dante, Director of Photography John Hora, and Editor Marshall Harvey; a half-hour making-of documentary sourced from the 2011 French release, behind the scenes footage from Dante's personal archives, a small selection of deleted/extended scenes, the original EPK from 1993, the obligatory Arrow Video booklet, and lastly film-within-a-film “Mant!” in all its glory – an intro by Dante, the trailer, and all 16 minutes of footage cut together like a mini film. No surprises here – Arrow Video has gone and done it again – a superb release affording prestige-level attention to another little cracker of a flick that definitely deserves the love.

Fun fact: Naomi Watts makes an early on-screen appearance as an actress in the other movie-within-a-movie “The Shook Up Shopping Cart”.

N.B. Screenshots are taken from the DVD copy of the film.
Posted by Nick Thomson at 17:11