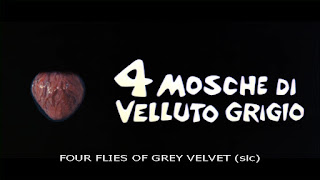 “Seeing all these worms make a living out of death, kind of knocks the fear out of you, right?” Dario Argento's third giallo film and, at the time, intended to be his last, Four Flies On Grey Velvet is a curious mix of murder mystery and offbeat comedy in which a drummer in a prog rock band finds himself framed for murder – but his blackmailer has no intention of calling the cops on him, so what is it they're after? 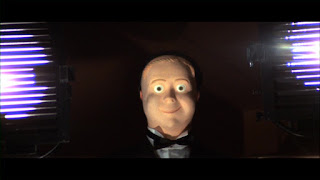 “Let's face it – everyone has to die – it's a commercial necessity.” Roberto Tobias (Michael Brandon, Episodes) has spent the past week being followed by a strange man in black – but to what end? Then, one night after band practise, Roberto chooses to stumble down the rabbit hole when he spots the stranger spying on him in the car park. Stalking the man in black to a dilapidated opera house, he confronts him – only for the man in black to pull a knife. A scuffle ensues and Roberto accidentally kills the guy. Stunned and gazing at the bloodied body – murder weapon in-hand – flood lights suddenly catch Roberto red handed and a mysterious figure in a creepy mask photographs him before fleeing the scene. 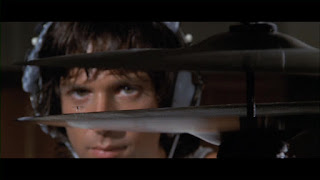 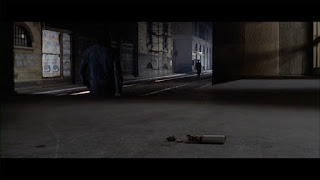 “I could kill you now – but I won't. I'll wait.” Roberto gets away with the unintended crime, but when the opera house voyeur starts to persecute him with evidence tying him to the unsolved murder, he spirals into paranoia. Even his own home isn't safe as his wife Nina (Mimsy Farmer, Autopsy) gets caught up in his woes and her cousin Dalia (Francine Racette) arrives just in time to raise Roberto's prurient interests. Employing Gianni Arrosio (Jean-Pierre Marielle), a private investigator, and enlisting the help of two street smart friends, Roberto hopes to get to the bottom of this strange case that somehow ties to a mental asylum and a discharged patient diagnosed with homicidal mania. Who is the killer, and how many more will have to die before the mystery is solved? 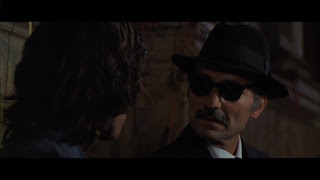 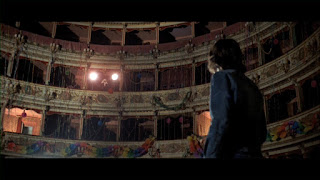 “If you're gonna call me God, at least you could call me God Almighty.” Wearing its literary and cinematic influences on its sleeve in typically brazen Italian style, Argento's follow up to Cat O'Nine Tails swoops like a magpie upon Raymond Chandler's The Little Sister (the mosquito opening), Truffaut's Stolen Kisses (following the telephone conversation), and Frederic Brown's The Screaming Mimi for two of the film's most intriguing characters – Godfrey and The Professor (Oreste Lionello). The latter, a light-fingered odd job man with an educated mind, is initially found lazing in a hammock scrounging for loose change. The former, meanwhile – played by Bud Spencer – is a world-weary vagrant (with a parrot named “Jerkoff”) whose street smarts far outsize the chemically-dwindled fish he eats raw from the sewer run-off on the outskirts of the city … and he's nicknamed “God”. Like omniscient observers, they hover around Roberto, dispensing advice and direction, but for the most part steer clear of outright intervention until absolutely necessary. Just like the beardy bloke in the clouds, 'God' has the uncanny ability to leave you swinging in the wind one minute and come to the rescue as your saviour the next. There's a commentary on academia and religion buried in all this somewhere, alongside the savage snipes at the modern Italy of the time. Indeed, gialli often provided their authors the opportunity to wrestle with the issues of the day within a populist framework, but Four Flies On Grey Velvet opts to leave the higher ideas dangling on a hook. 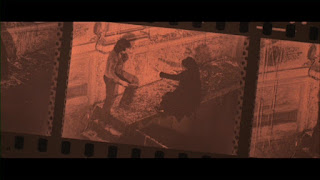 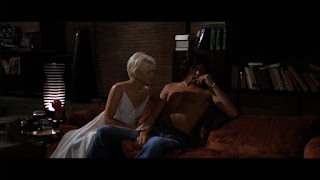 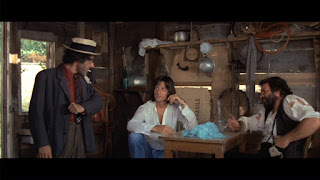 “Eighty-four failures! A fantastic record!” The Italians were also quite fond of their comedies as a change of pace when they'd had enough sex and death for one evening, but Four Flies On Grey Velvet displays Argento's fondness for offbeat jokes. Prefiguring the 'battle of the sexes' humour writ large in the lengthier Director's Cut of Deep Red (1975), here we find Arrosio – a decidedly camp (and rather dated) Private Investigator – replete with a collapsing Fiat, a track record of complete failure at his job, and a curious approach to painting and decorating. However, the broad comedy extends further to a recurring sub-plot with Roberto's embattled mail man (bumbling, beaten, and bug-eyed), and a bizarre interlude where Roberto, God, and The Professor analyse the murder mystery while exploring a coffin convention! Some of the humorous moments work quite well, but others are considerably jarring, making for a constantly shifting tone throughout. 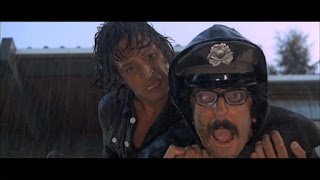 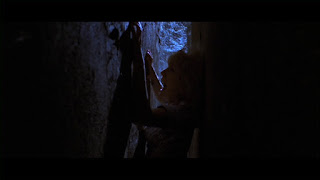 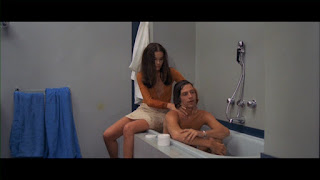 “What are ya after, man? What's your trip?!” It may feel like a long 99 minutes, but the key set pieces lift the film as a whole and exhibit the Dario we all know and love. From a particularly effective stalking scene that draws us into the darkness of an attic, to the use of sound (the howling wind outside Roberto's locked windows is especially foreboding), the film's weaknesses are mostly swept aside by Franco di Giacomo's meticulously arranged visuals. Framing, lighting, depth of field, set design – all of it makes for a strong visual piece … if only the same attention had been paid to the pacing of the script and the weak-sauce leads. Nina only comes alive towards the end, while Roberto is condemned to little sympathy or interest from the audience because he himself feels only half-interested in the peril that surrounds him. However, other highlights include a surreal visit to a public park where crowds of people vanish – and day switches to night – in an instant, and an underused fantastical conceit that the last thing a murder victim saw can be scanned and reproduced much like a photo negative. 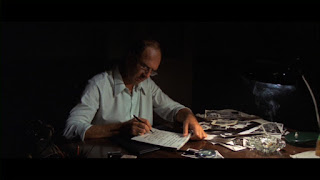 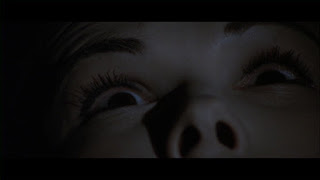 “Eugh! How horrible! Who brought him here?” Foretelling future Argento gialli – Deep Red and Terror at the Opera specifically – Four Flies On Grey Velvet is an uneven outing from the master of Italian genre cinema. Lacking the focus and finesse of his début The Bird With The Crystal Plumage, and the sheer bravado of his later work – such as Suspiria and Tenebrae – Dario's third film nonetheless emerges from the shadow of his other attention-grabbing work as an early indicator of what was to come (see the final moments, captured in extreme slow motion). 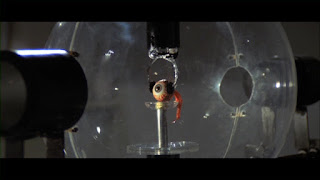 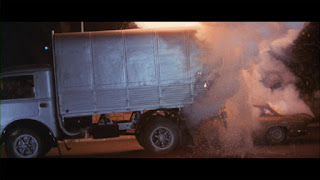 “Just as I suspected – a typical victim of the consumer society.” Shameless Screen Entertainment's 35th DVD release (from 2011 – also available on Blu-Ray) is one of their best looking outings to date. Sound and Picture are both excellent – although several moments of re-inserted footage are of starkly poorer quality, occasionally switching to an Italian track with English subtitles – but for the most part the presentation is impressive, remastered from the original negative. Shameless have rarely boasted extensive special features, but a 40 minute interview with co-writer Luigi Cozzi (Contamination) proves to be an enjoyable and informative discussion of Argento's lesser-known giallo film. Rounding out the package are two trailers, a photo gallery, alternative English credit sequences, and a fleeting intro to the film.
Posted by Nick Thomson at 17:44