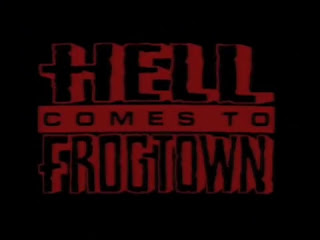 “Well maybe you oughta try making love to a complete stranger in the middle of a hostile mutant territory and see how you like it!” The 1980s saw (for a time at least) the last terrifying hurrah of the threat posed by global nuclear decimation as slamming a fist upon the red button gave way to deals, draw-downs, and perestroika. At the time, however, the possibility of a radioactive apocalypse was still very real – perhaps as real as it had been since the Cuban Missile Crisis (as detailed in Joe Dante's Matinee) – and as such, the topic was ripe for plundering to form the basis of many genre pictures that did gang busters business on the video rental circuit. With the likes of Creepozoids (David DeCoteau, 1987), the atomic paranoia of the real world painted a bleak future to be expressed on the silver screen – and sometimes that included gun-toting man-sized frog men on the hunt for fertile women, as was the case with Hell Comes To Frogtown... 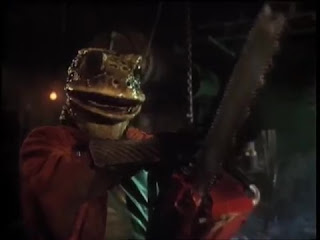 “In the latter days of the 20th Century there arose a difference of opinion. In just ten days 10,000 years of human progress was virtually blown to dust.” Mankind's situation is dark: a nuclear war has resulted in the deaths of 68% of all men on the planet, and fallout has left almost all of the population sterile. Now, the front line is less about guns and bullets and more about heading south of the belt line in search of strong swimmers. Plissken-ish rogue Sam Hell ('Rowdy' Roddy Piper, They Live, in his first movie role) is in deep trouble with the law after being caught in the sack with the daughter of Captain Devlin (William Smith, Any Which Way You Can). However, when she surprisingly becomes pregnant, the women of Medtech – where 'making babies is our only business' – intervene and commandeer Sam's fun zone as government property, replete with a chastity belt ready to shock him into submission should he get out of line. 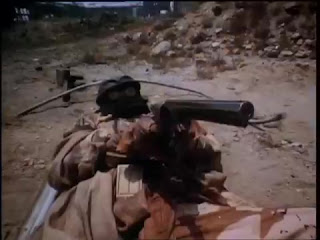 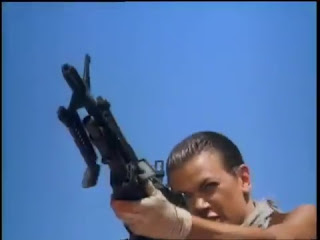 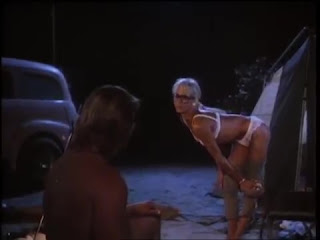 “On the other hand, I've always been a patriot.” Lead by Spangle (Sandahl Bergman, All That Jazz), Sam ventures into the wasteland to rescue a contingent of 'passives' who strayed into 'greener' territory and got themselves hauled into the harem of Commander Toty (Brian Frank), a ribbiting war lord overseeing a lawless 'reservation' for mutants. Their journey will be a perilous one, and more tiring that Sam initially thinks, as he's tasked with maintaining his potency and honouring his government contract to impregnate under less-than-romantic circumstances. 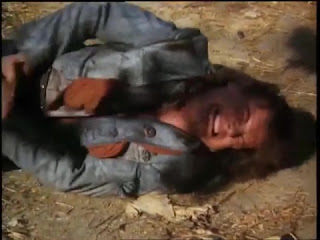 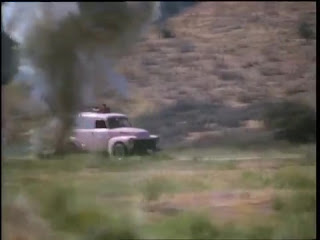 “I'm not a machine you can turn on and off whenever you want to, you know.” Ambitiously stretching the limits of its modest budget, Hell Comes To Frogtown is the cinematic equivalent of having your cake and eating it too. Diving head first into gender politics, this post-nuclear war society is run by the surviving women after most of the men were slain on the battlefield, but never fear, because lingerie survived the bomb, too! Playing with an odd couple dynamic between Sam and Spangle, screenwriter Randall Frakes (story co-credit by Donald G. Jackson) inverts gender roles – look no further than the machine-gun toting Centinella (Cec Verrell) – while still playing it sexy for the young men in the audience – again, look no further than Centinella in her short-shorts and figure-hugging camo tank top! This was, naturally, never going to be a worthy piece of hand-wringing academic discussion, but it does illustrate the power that exploitation films have: you can enjoy yourselves and insert all kinds of socio-political comment without turning into a pompous arse adorned with over-sized spectacles and an exceedingly conservative haircut. Here in Frogtown everyone gets to kick ass – from Sam's wrestlemania-esque tussles to Spangle's leg-crossing answer to the 'dance of the three snakes'. 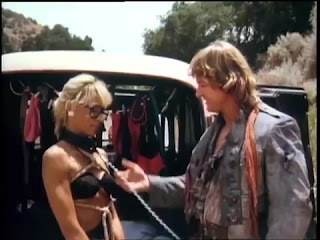 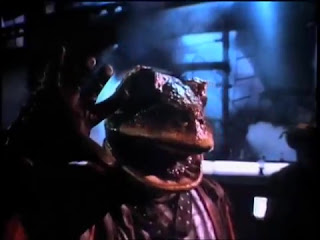 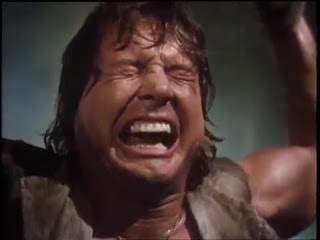 “I gotta tell you, you're one weird dude.” The limits of the budget are evident throughout, but only in terms of scope when it comes to the spectacle. The creature designs by Steve Wang are gleefully fun to behold on screen from Toty's glistening and animated close-ups to the chainsaw-wielding antics of second-in-command Bull (Nicholas Worth, Don't Answer The Phone). The car chase in the climax might only amount to two vehicles yomping around the desert with a few explosions scattered about, but how could anyone not enjoy the sight of a 6ft 4inch mutant frog snarling atop an off-road truck as it roars in the wake of a modified pink hot rod with a blazing machine gun mounted to the roof? 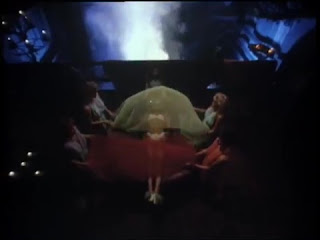 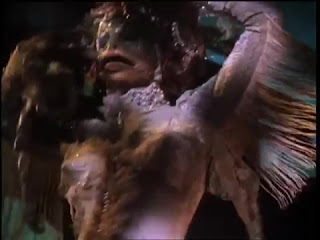 “Eat lead, froggies!” Bolstered by a game supporting cast – including Kristi Somers as exotic dancer/frog woman Arabella, and Rory Calhoun's ageing dweller of the wasteland Loony Tunes – this action comedy could have used a few extra dollars in its production pockets, but the clash of real-world nuclear fear and B-Movie entertainment make for a thoroughly enjoyable 87 minutes that strikes out from the heart of the VHS rental era where all kinds of weird and wonderful films could be found on a display surrounded by dozens of other such movies, all of their outrageous covers screaming for your attention. 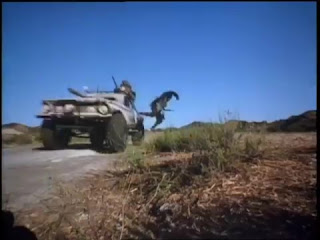 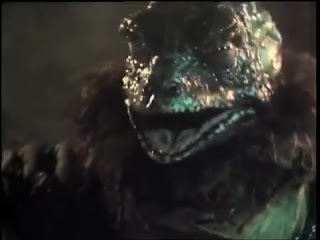 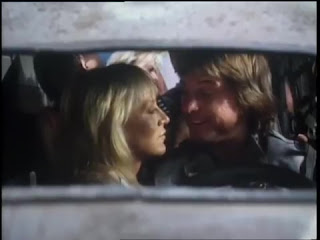 “There's a flap.” Arrow Video's Blu-Ray presentation features a generally solid audio/video presentation. Any problems come down to the original production – such as some murky bits of absent sound design, or the odd soft-focus shot – but Arrow do their tried-and-true best to give the viewers an impressive-looking flick in high definition 1.78:1 widescreen (note that these screenshots are from a trailer I dug up on YouTube – I don't have a Blu-Ray drive from which to capture images). The extras are a smidge on the lean side with three interviews, amounting to roughly 50 minutes, accompanying an extended scene and a trailer. The interviews include Brian Frank (Commander Toty), Steve Wang (creature creator), and Roddy Piper (Sam Hell) and each interviewee assumes a warm affection for the film, with Piper delivering some humorous dispatches from behind the scenes with a wry sense of self-awareness.