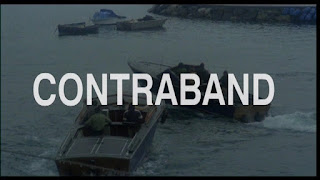 “Italy is starting to look like America in the thirties.” Otherwise known as The Smuggler, gore maestro Lucio Fulci's crime epic Contraband mixes old school Mafia romanticism and contemporary cynicism with extreme violence as cigarette smugglers face off with the new tough guy in town: a drug runner with a sadistic streak... 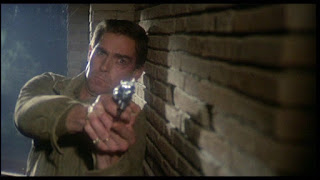 “If you want to protect your neck you must tell me everything.” Luca Di Angelo (Fabio Testi, What Have You Done To Solange?) is a family man, a charming rogue, and one of a handful of crime Capos who help Naples' black market economy stay on-track. However, when a large haul gets busted by the cops, all eyes fall on Scherino (Ferdinando Murolo) – a rival with a taste for takeover. Soon, acts of violence throw this underworld into turmoil, with the murder of Luca's brother setting the brooding blue collar criminal on a course for vengeance. 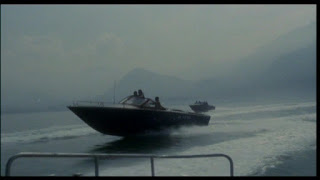 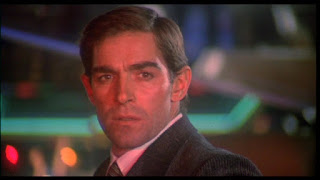 However, when it turns out that Scherino didn't order the hit, a new threat emerges: The Marsigliese (Marcel Bozzufi, The French Connection). He's no ordinary criminal, revelling in extraordinary acts of violence (e.g. burning the face of a drug seller who tries to offload weak product), and is one who wastes no time in slaying his rivals. Utterly brazen and hell bent on assuming control, he takes them out: at their churches, their homes, and even the local race course – where a scream of victory gives access to a brain-splattering gun – no place is too public, no hit too daring; the streets of Naples are running with blood! The remaining Capos are faced with a choice: abandon their own moral code and allow heroin to flood their streets, or risk death and fight back. 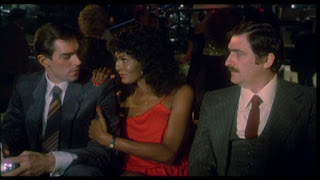 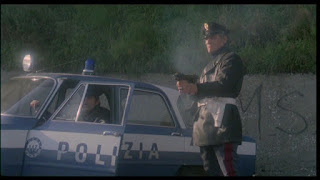 “You want revenge, a vendetta. But aren't you afraid that maybe they'll kill you too?” Written by Ettore Sanzó and Gianni De Chiara with Lucio Fulci and Giorgio Mariuzzo, Contraband offers a fascinating take on criminal enterprise. Set in Naples, the film's anti-heroes may be criminals, but they're seemingly the 'right kind' of criminal. Their avenues of money making extend to 'simple pleasures' like horse racing, prostitution, and cigarettes, with their rackets supporting a 200,000 strong community of people struggling to find legitimate work to support their families. There's something strangely romantic about the whole set-up, with the generally moral Luca leaving hard times in Milan for relative riches in Naples. He's not a killer (unless he's forced to be), he doesn't subjugate the poor, and he treats people with respect – it's only the dreaded tax man suffering from his blue collar pursuits. Luca & Co's actions are deemed socially acceptable in the community, even a vital part of their economy. Indeed, when a major bust on the cigarette racket occurs – spurred on by an big wig outsider in the police – many mothers, old ladies, and even nuns are caught up in the dragnet! 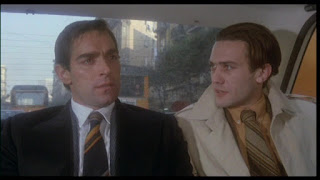 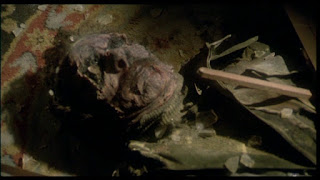 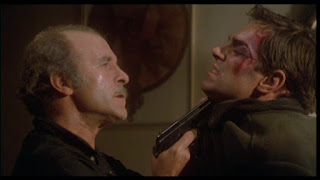 This old-world quaintness is echoed by Don Maroni, an old school mafia head honcho who prefers to sit and watch westerns with a cup of coffee than get his hands dirty as the Marsigliese runs rampant. Locked in a relationship of mutual respect with the police, Don Maroni and his mature peers like violence on the TV screen, not on their streets. The sudden explosion of ultra violence from the new man in town – and the evils of heroin looming on the horizon – threatens the delicate balance of order that is maintained by those on both sides of the law. It's in everyone's interests to bring down The Marsigliese as some actions cannot go unpunished, some crimes cannot be looked away from. 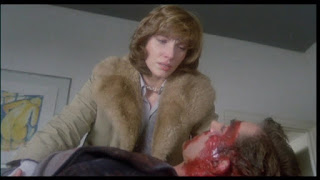 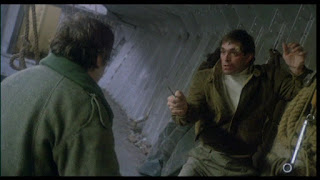 “Well as long as they keep killing themselves, it's fine with me. These things are becoming routine now, what d'ya want?” Fulci is perhaps best known for gore-soaked horrors like Zombi (1979) and The Gates of Hell Trilogy (1980-1981), or the extreme violence of The New York Ripper (1982), but he was also known for westerns and some masterful turns at gialli – like 1972's Don't Torture A Duckling. His films were often decried by their detractors as misogynistic – and the director certainly had a mixed relationship with his actors (some he revered, others he tortured) – but then again there seemed to be no limits to who suffered the wrath of violence in his films. Men, women, and children, all endured innumerable evils – be they human or supernatural – but beneath the top layer of shocking violence there usually lay a weary cynicism and a yearning for a more peaceful world. Art mirrors the violence established by the real world, and just because the art deals with depravity, doesn't mean the artist is depraved … or are they? Perhaps Fulci himself was unsure, as 1990's A Cat In The Brain seemed to suggest. 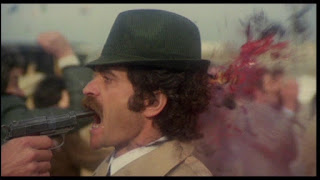 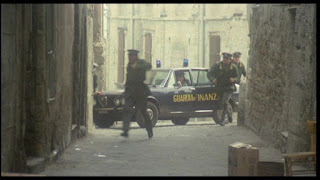 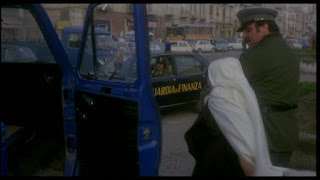 Like much of his work, Contraband is riddled with moments of graphic violence and gore. Flesh is torn asunder by explosive gunshots at regular intervals, while the extent of the Marsigliese's sadism is displayed in unflinching detail during one particularly harrowing scene of assault – one of the most disturbing sequences in a Fulci film. It's impossible not to flinch, but beneath the obviously shocking outer layer of the scene, it is underscored by a sadness brought on by the violence itself: while the Marsigliese instructs from the sidelines, the seemingly hard boiled shell of his assassin appears to crack. In some ways the scene reflects the agonising sequence in which a presumed witch is lynched in Don't Torture A Duckling. With that film, we the viewer had to witness this heinous act, while in Contraband Luca is left impotent on the other end of a phone as his wife is attacked. Both films show the horrors of violence in an absolute form – the blunt and bloody immediacy of it – but any sense of titillation dissolves as Fulci pushes the boundaries further than 'good taste' would dictate. In-so-doing, Fulci skirts the line of absurdism while laying bare the ugly truth of violence, something that is lamented as utterly deplorable in the final scene of the movie where pragmatic realism is outlined by clear boundaries: there are some things nobody should suffer, but inevitably there will be perpetrators who must be swept away for the benefit of us all. Even in the criminal underworld there are lines in the sand. 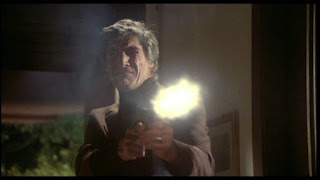 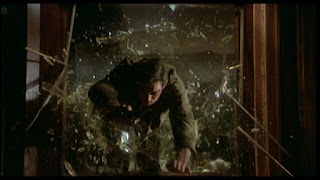 “Your perfume is very special.” The film does get off to a slightly slow start, but the action soon ramps up with Fulci never forgetting to entertain as much as shock. Fulci's sense of humour arises on occasion – such as the snotty-nosed doctor whose handshake is refused, or the mob boss lecturing his daughter on the dangers of the world before loading his shotgun. Indeed, one of the highlights comes when the old guard seek to settle the score by staging a ballsy ambush – hails of bullets and geysers of gore ahoy! Fulci even pops up in a cameo, merrily unloading a machine gun at his audience. Although even when he's having fun, Fulci can't help but push buttons. One particularly strange moment sees mob Capo Perlante (Saverio Marconi) drunkenly humiliate his underling Alfredo – by having the rather excited Ursula tear his clothes off and demand intercourse! It makes for a bizarre interlude, climaxing with poor Alfredo fleeing for his chastity with a rapacious, buxom blonde in pursuit … oh, Lucio, you can't resist, can you? 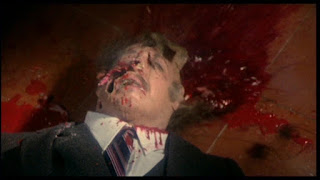 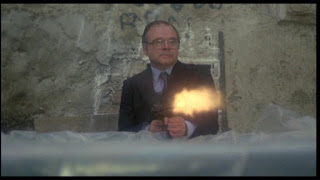 “That means a lot to me – truth in a world of affairs.” Riddled with blood-splashing action, the twisted turns of criminal enterprise are exposed and ripped apart by Fulci during his directorial prime. Capturing the old world, fog-wreathed mysteries of Naples' stone streets and docks, Contraband deftly toys with the idea of 'good bad guys' and 'bad bad guys' as it seemingly laments the passage from old school 'Mafia respect' to lawless, unbounded criminality, a theme which is echoed by Fabio Frizzi's heartbroken score (feel the sorrow rising up from within Luca as he realises his brother has been slain). Fans of Fulci's work and/or Eurocrime cinema should definitely seek this one out. 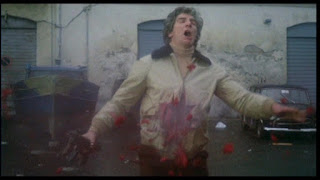 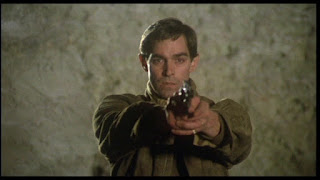 “If it gets much worse I'm going to America.” Shameless Screen Entertainment's 43rd DVD (released in 2014), limited to 2000 units, is presented uncut and in widescreen. The audio track is solid while the print is variable according to the source materials (there are a few instances of damage or, unsurprising for these speedy Italian productions of old, some out-of-focus shots). Previous UK releases on VHS suffered from nearly three minutes of cuts, but all of them were waived for this release, offering Fulci's crime flick to viewers in all its brutal glory. Extras are lacking, unfortunately – all you get is some trailers, a pointless 'alternative opening credits' sequence, and choice of English or Italian audio (with optional English subtitles). The lenticular sleeve is a snazzy touch, but it's disappointing that it's pretty much a bare bones release.
Posted by Nick Thomson at 11:14