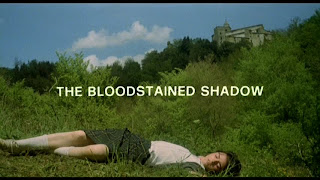 Otherwise known as 'Solamente Nero' in its native Italy, The Bloodstained Shadow is a twisted and highly atmospheric giallo directed and co-written by Antonio Bido (Watch Me When I Kill) set in a 'hypothetical Venice' where murder, Catholicism, and alternative spiritualism clash in a semi-blasphemous mystery wreathed in mist and deadly shadows. 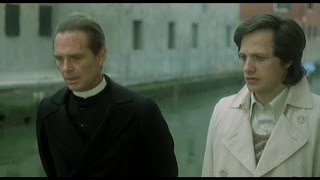 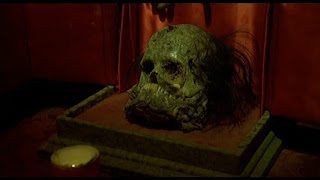 Click “READ MORE” below for the review and many more screenshots...


“Marriages, Baptisms, and Burials – nothing else.” Stefano (Lino Capolicchio, The House With The Laughing Windows), is a stressed university professor who retreats to Venice to visit his Priest brother Paolo (Craig Hill, Dracula vs Frankenstein), but he arrives just as a spate of murders begin to thin-out the population. Naturally for a giallo film, these murders are of limited concern to the local police, who are more interested in their lunch – secrets, lies, sex, and murder will play out of their own accord. 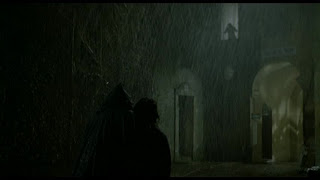 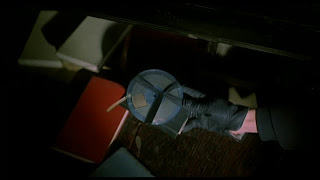 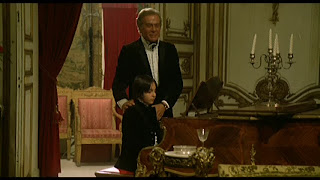 “There's something frightening about her.” Catholic Priest Paolo reveals to his brother that he is at odds with a collection of residents who practice blasphemous seances (one of whom is rumoured to conduct surreptitious abortions), but on Stefano's first night in town, the Medium (Alina De Simone) is strangled in a storm as Paolo watches on in horror. As it turns out, these clandestine meetings were also a way to extract secrets via hypnotism for blackmail, and so begins a forever-escalating murder mystery with Paolo singled out to receive portentous death threats. 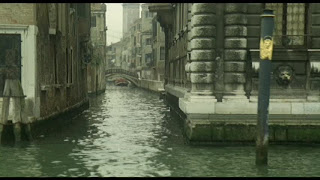 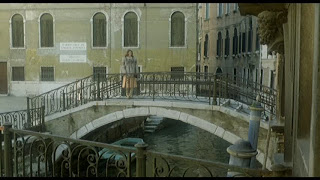 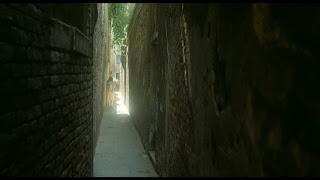 “You found a hell instead of the peace you seek.” Plagued by haunting visions, Stefano finds solace in Sandra (Stefania Casini, Suspiria), an interior decorator who is in town to visit her sickly mother. However, peace is unlikely as bodies continue to be discovered – but who could be the murderer? The film is populated by a series of possible killers – could it be the grieving father (Luigi Casellato), the insane son of séance member Signora Nardi (Juliette Mayniel), the severe-looking Doctor Aloisi (Sergio Mioni), Paulo's shifty-looking sacristan Gasparre (Attilio Duse), the child molesting man of wealth Count Pedrazzi (Massimo Serato), or even Stefano himself? 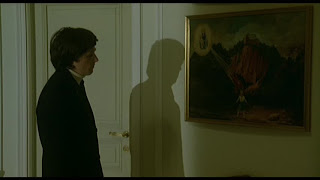 “The past and your fate are linked with death.” Catholic-raised Bido's film is doused in religious iconography while simultaneously criticising the corruption, and mindless chanting-for-forgiveness, that it engenders. Indeed, for Bido, religion is a frequent theme that is open to examination and – in 1970s Italy at least – he was deliberately being somewhat blasphemous to challenge the institution that was, and generally still is, such a big part of Italian society. There is a seam of spiritual and cultural friction throughout; numerous conflicts between moral and immoral, old and new, the traditional and the unconventional. The Bloodstained Shadow boasts a richly textured narrative constructed by Bido, with Marisa Andaló (who later married the director) and Domenico Malan. Here, intricate misdirection is most certainly the name of the game. 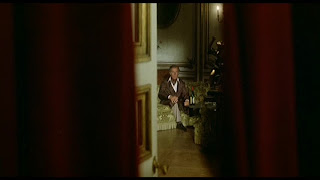 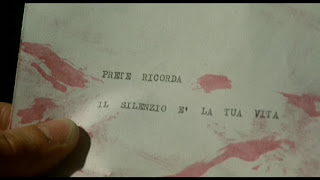 “I'd prefer to go to hell first before seeing you.” Beautifully filmed by Mario Vulpiani, Bido's 'hypothetical Venice' was in fact shot on the nearby island of Murano (except for one sequence that was captured on the Venetian canals), and yet the viewer remains simultaneously convinced and disorientated by this atmosphere-over-actuality location. Initially overcast, expansive, and somewhat flat, this version of Venice gradually becomes ever-more claustrophobic, and visually divided by limited shafts of piercing light and stark voids of sinister shadows. Even some of the interiors are as indulgent of the eye as the exteriors. 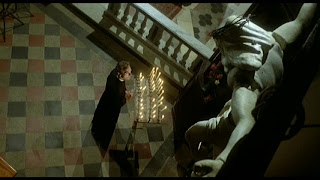 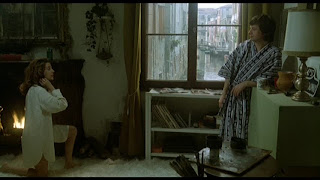 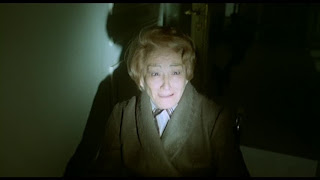 “A man who wants to live in peace in this place suspects no-one.” Compared to other gialli of the time, Bido's film is surprisingly light on gore, but in-place of blood-soaked vivisection there is an impressive sense of visual artistry on display. Amedeo Giomini's editing will at times spiral into flourishes of quick-slicing juxtaposition, working fluidly with Vulpiani's gorgeous compositions, thus bringing a unique perspective to Venice. These fast-paced images inspire a sense of delirium that compliments the morally ambiguous world that these characters inhabit. 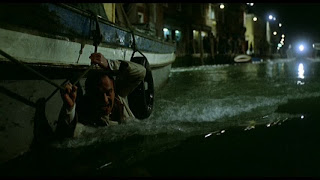 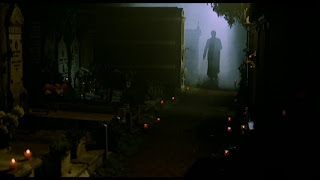 “I've been sent in God's place.” Even on the sound-scape, the film offers up sumptuous delights. Stelvio Cipriani (What Have They Done To Your Daughters?) wrote the music, while Goblin (technically not working under that name here) arranged the pieces to their idiosyncratic style. Heavy, plucked basses, discordant chimes, and stabbing keyboards all fuse together for that wonderfully ethereal – and at times fast-tempo – sound that Dario Argento's favourite composers have so famously brought to other productions. 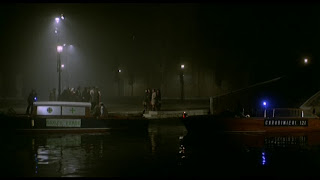 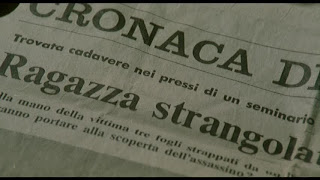 “He's a mortal sinner, he's worse than people know.” While a little overlong at 109 minutes – the pace does tend to slacken on occasion, between the effectively tense stalking scenes – The Bloodstained Shadow is nevertheless a masterfully eerie addition to the giallo world. Laced with surprises, and enough damning glances to make nearly everyone a suspect, Bido brilliantly guides us through misty waterways, dark alleys, and overpopulated cemeteries to provide an intriguing and thrilling giallo experience. 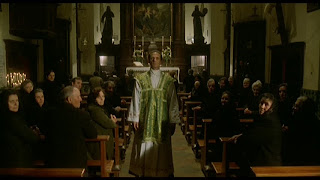 Blue Underground's 2008 DVD features a clear visual and aural presentation, and includes a filmography, a trailer, and a 2002 interview with the affable director.
Posted by Nick Thomson at 16:34