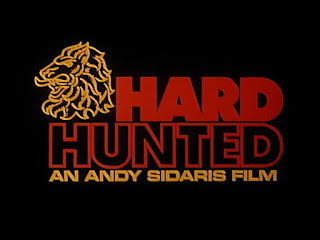 “We just go in and kick ass!” / “That's a plan.” International villain Kane returns, but this time he's not playing death games for a sense of honour, oh no, 'cos now this gun runner/all-round bad dude means business. On the hunt for his stolen Klystron Relay (essentially a key to a nuclear bomb), the buff 'n' busty agents of, er, The Agency, dive into a bombastic cat & mouse chase as the plot macguffin has a propensity to change hands almost as many times as the cast's clothing drops to the floor... 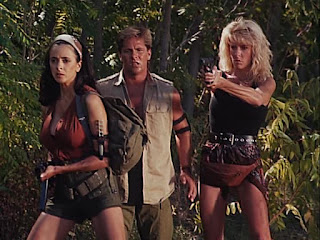 
“Aloha, Hawaii! It's Ava, your moonlight mistress – let's spend the night together.” With undercover agents Mika (Mika Quintard) and Silk (Carolyn Liu) aboard criminal mastermind Kane's luxurious yacht, they take time out from their busy schedule of fine dining and lingerie-clad three-ways to steal a Jade Buddha figure, which for some reason is very important to Kane. Meanwhile, Donna (Dona Speir, Savage Beach) and Nicole (Roberta Vasquez, Guns) are enjoying some much-needed R&R after their life-or-death escapades in the previous movie (Do Or Die) – but when their riverside bikini splash fights are interrupted by the arrival of Mika with a giro-copter hot on her tail, the Agency's most capable ass-kickers find themselves embroiled in another fine mess. 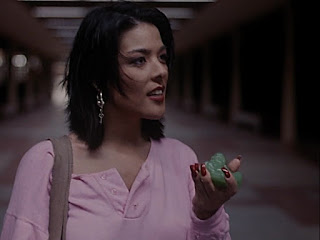 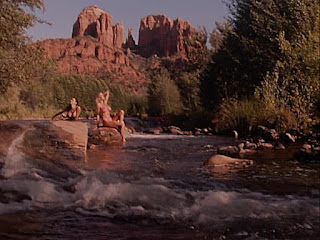 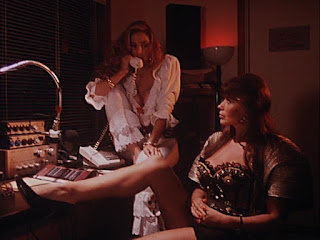 “So our little hummingbird becomes a hawk.” With the action returning to the Hawaiian islands once again (who knew a holiday paradise for Middle America was the hub of so many threats to national security?!), Donna and Nicole gather their team and get stuck into the usual mix of firing tiny guns at speedy aircraft and bonking on-the-job. However, when Donna is captured and suffers amnesia, it's up to Nicole, Bruce (Bruce Penhall, Body Count), and the rest of the team to get their golden gal back and secure that nuclear trigger hidden inside the Jade Buddha. Will they succeed? Why do they always have to wait until morning to take action? What kind of birth control methods are these randy bunnies using? Where do they keep their supply of hairspray to maintain their fantastic hairdo's? 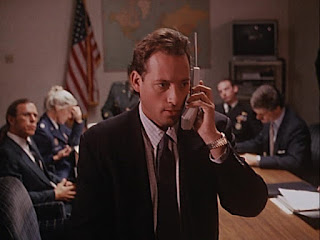 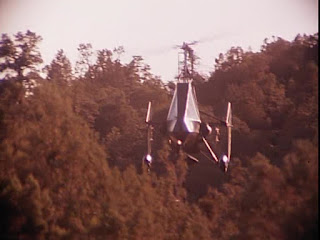 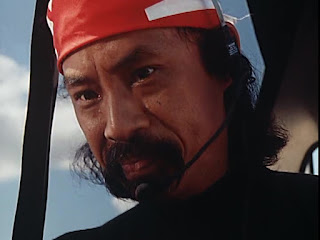 “When we are finished with her she'll be singing the song of death, and Lucas will applaud her from hell.” The usual heady mix of entertaining nonsense is what can be expected from Hard Hunted, even if the formula is getting a bit tired at this point in the series. From Kane's practically lustful appreciation of the giro-copter belonging to head goon Raven (Al Leong, Die Hard) to the introduction of a radio station behind the scenes at Edy's new restaurant, Hard Hunted boasts its fair share of silliness. With Ava (Ava Cadell) manning the microphone – occasionally from a topless hot-tub, and always while wearing a range of figure-hugging, skimpy-as-you-like bikinis – The Agency has a new tool in spy craft: the call-in 'Sextrology' show! What on earth is that? Just a way to broadcast vaguely secret messages to agents in the field, of course … as long as they're in earshot of an AM/FM radio, that is. 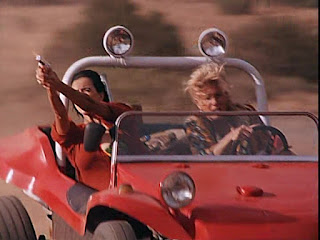 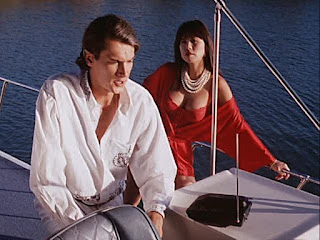 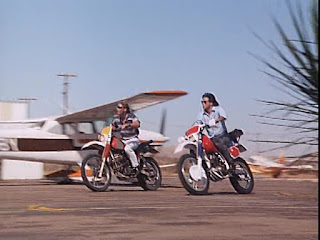 “I have a contact in Arizona. He's reliable – he's Asian.” By this point in the 'L.E.T.H.A.L. Ladies' saga, Andy Sidaris had successfully managed to streamline his scripts enough so that they were no longer baffling and bloated – which is what became of the otherwise entertaining Picasso Trigger (1988). However, despite finding a consistent groove, Hard Hunted manages to throw up some new complications – namely resurrections and re-castings. While all the films are connected, and some actors have previously returned to play different roles, this is the first time that a single major villain has crossed from one film to the next, and so this seventh entry in the series is a direct continuation of 1991's Do Or Die, with Kane coming back to do battle with The Agency once again. The big wrinkle in that? Pat Morita (The Karate Kid) doesn't return to the role, which is instead handed to the decidedly not Japanese-American, definitely white British actor Geoffrey Moore (Fit To Kill). Bold as brass like usual, Sidaris never bothers to try and explain away the jarring difference in age, race, nationality, and accent, and just rolls with it! 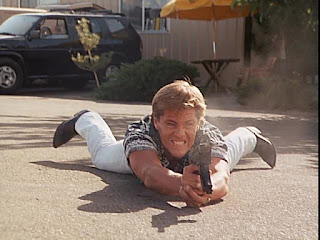 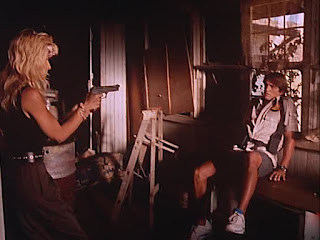 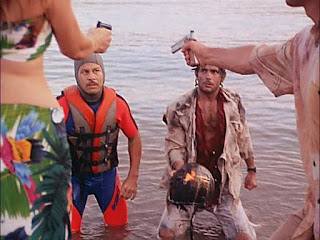 “Stones? I'll show you stones.” Kane isn't the only character who is played by a new actor, though, as Lucas – previously portrayed by William Bumiller – is now brought to the screen by Tony Peck (Sliver). And what about those aforementioned resurrections? Ah, yes, because despite being blown up and moved into the “death zone” in the previous movie, Ava and Skip (Skip Ward) both return – but this time Ava is now a part of The Agency and Skip is the right-hand-man of mercenary-for-hire Pico (Rodrigo Obregón). Is any of this explained? Of course not – don't be daft! Also returning, among other familiar characters/faces, are bumbling assassins Wiley (Chu Chu Malave) and Coyote (Richard Cansino) whose penchant for needlessly complicating their hits once again bites them in the butt. Sidaris escalates the wink to cartoon violence to sledgehammer-meets-nose levels of gleeful obviousness – just look at the bold white “ACME” scrawled on the side of that gun! 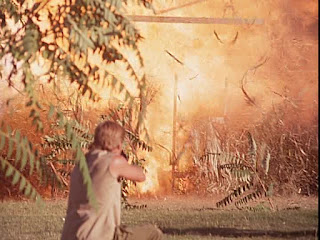 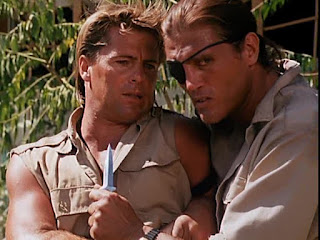 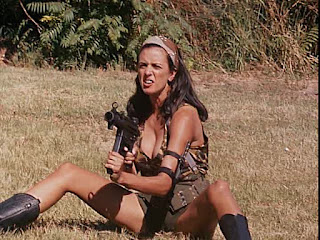 “Even James Bond takes time out for sex.” Despite being made for adult audiences, Sidaris' movies are now rather quaint by today's standards. While the sex scenes are frequent (sometimes very frequent), you often see raunchier stuff in music videos these days, because in the Sidaris-verse there may be a lax dress code but there's nary a pelvic thrust in sight. Similarly, when it comes to language, it's pretty tame for the most part, and even the violence is often brief and nothing like what passes for mainstream entertainment today. Imagine, if you will, a typical episode of The A-Team … but with lots of T&A. Sounds like jolly good fun, doesn't it? Well, it sure is, even if the merry-go-round is starting to feel a bit creaky by this point. 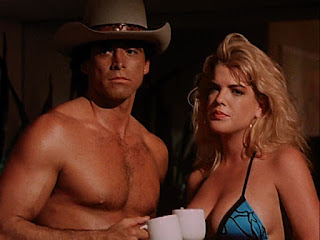 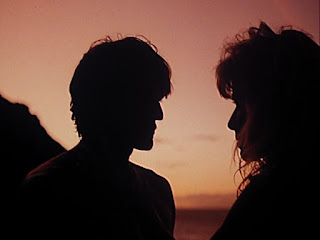 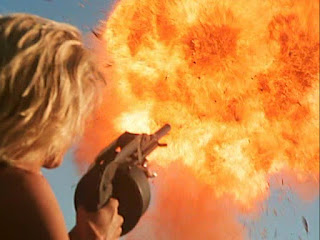 “We were never lovers. I faked that orgasm!” However, when you consider that Sidaris was cranking out one of these movies once or even twice a year, and that the scripts were cobbled together from first idea to final draft in about three weeks, it's hardly surprising that Hard Hunted ends up feeling a bit 'been there, done that'. Still, though, even if the film struggles to live up to some of the more zippy entries in the series, if you're seven movies deep into a franchise you know what to expect: more of the same silly fun. Even if the engine sputters as often as it roars, viewers can be sure to enjoy more of the spunky resolve of Donna and Nicole, whose endearing mix of beauty, brawn, and brains has proven to be one of the most pleasing aspects of the Sidaris-verse.
Posted by Nick Thomson at 17:07