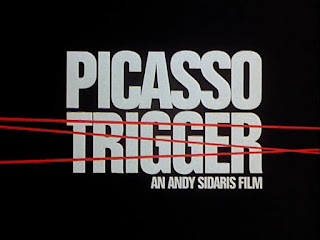 “As long as someone's selling tickets, my tail is shaking.” Following on from the giddy heights of the utterly bonkers Hard Ticket To Hawaii (1987), writer/director Andy Sidaris had found the right kind of groove to establish his 'L.E.T.H.A.L. Ladies' series, and so entry number three – Picasso Trigger – sees numerous returning characters, more bared chests than you can shake a boom-erang at, a Martini distillery's worth of cockamamie riffs on James Bond, and an endless supply of exploding vehicles to rival any episode of prime time television in America's Reagan era... 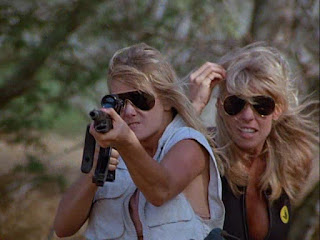 “The Agency wanted to make us look like a couple of real polyester hicks … well, they went all the way.” Kicking off with the assassination of philanthropist/crime lord/Picasso Triggerfish enthusiast Salazar (John Aprea, Fuller House) in Paris, the action hurriedly sweeps to Las Vegas where two mismatched agents from 'The Agency' (the vague remit of which seems to be whatever is currently happening in the plot) are marked with flowers, which have tracking beacons hidden inside, before they are dispatched in the desert when a helicopter swoops by and blows them to smithereens. Wanna catch your breath and get your footing? Fuck you, 'cos we're now off to the Hawaiian islands where fellow Agency agents (and heroines of the previous film) – Donna (Dona Spier, Savage Beach) and Taryn (Hope Marie Carlton, Ghoulies Go To College) – narrowly escape being char-broiled after their yacht is blasted to bits. Time to settle down, find out what's happening, right? As if! 'Merica, fuck you! We're off to Dallas, Texas where L.G. Abilene (Guich Koock), also an Agency man, survives a failed assassination attempt. Phew! So … now can we figure out what's going on? Oh, all right, if you insist... 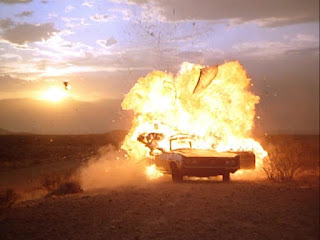 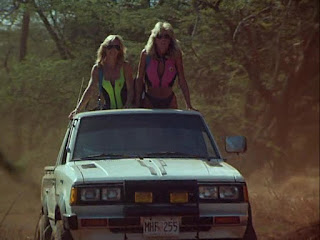 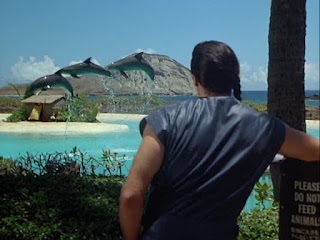 “The bad news is the boat we were on was blown up. I think someone's trying to kill us.” It turns out that the man behind all this mayhem is Miguel Ortiz (Rodrigo Obregón, Return To Savage Beach), who wants revenge on his brother … maybe? … but also, certainly, to gain control of Salazar's criminal enterprises. Enter Travis Abilene (Steve Bond, Gas Pump Girls), the third of the Abilene family to take the male lead role in one of Sidaris' movies, and yep, he's also a terrible shot – something which runs in their DNA, it seems. Joined by undercover agent Pantera (Roberta Vasquez), triple-denim fanatic Travis has to make sense of this beyond convoluted plot which also involves, somehow, a barely touched upon sub-plot involving a slavery/snuff film business operating out of Las Vegas, a boat load of red herrings, a glut of extraneous plotting, and some gleefully absurd weaponry. 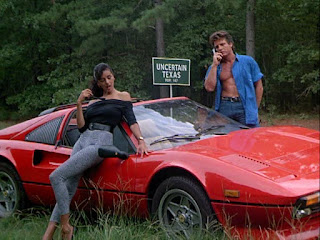 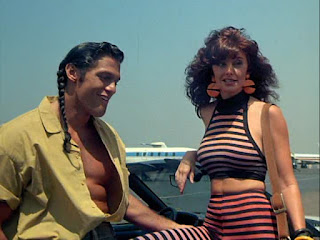 “Is that a snorkel in his pocket or is he just happy to see me?” / “It's a snorkel, Taryn.” / “I'm having a bad day.” Suffice it to say, but Picasso Trigger is a movie that's difficult to follow. From the globe-trotting opening act to the litany of bit part characters biting the dust, the first half kind of plods along with a surprising amount of restraint (relatively speaking, at least) when it comes to the T&A scenes. The main culprit for the unfocused storytelling is the bloated cast list, which is padded out with a succession of side characters and 'favour cameos'. What's a 'favour cameo', you ask? Clearly Andy Sidaris and his producer/wife were very good at convincing people to loan the film production cut rate use of their house/yacht/helicopter/whatever in exchange for credit (see the extensive list of name-checked businesses in the end credits) and/or an on-screen appearance with a line or two. By way of example, see the scene between Pantera and the owner of the tourist barge which she commandeers during the speed boat chase early on. There's no need at all for that scene to be in there as it only serves to extend the already too-long running time, but obviously it's only there by way of a favour in-kind. Fair enough, perhaps, because it seems it was an effective method for amplifying the movie's sense of scale and bang for buck, but it doesn't half slow the pace and confuse the viewer. 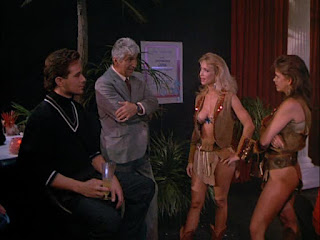 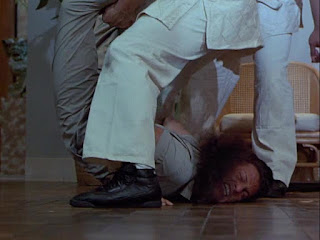 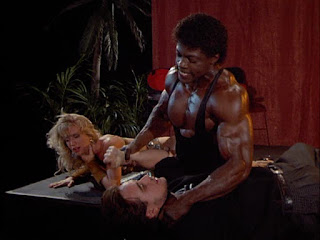 “Speaking of golf, wanna putt around?” The movie is littered with holiday destination locations, and a vast amount of transportation. Cars, speed boats, planes, jet skis, helicopters, dirt bikes, and a ruddy hovercraft are all utilised throughout – some of them even get blown up in great big fireball explosions. Sidaris' fascination with remote control toys even makes a return from the previous movie, as an RC plane and then later an RC car are both loaded with explosives and sent into action. So there's an awful lot of scale, but the budget is small, which perhaps explains why so many of the actors do their own stunts, but this does add a frisson of excitement as Dona Spier and Hope Marie Carlton yomp around on dirt bikes while hotly pursued. 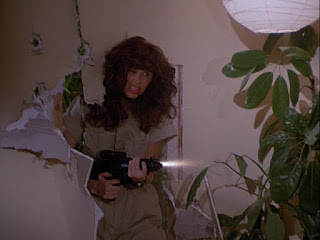 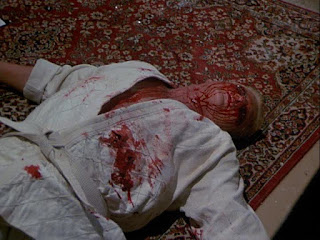 “He's no pro golfer, but he sure can use his driver.” When it comes to the dialogue, though, it's the definition of a mixed bag. Some lines are functionary and delivered with a performance more befitting of a half-dead fish, while other lines ramp up the 'skin-emax' silliness to eleven, while yet more simply don't make much sense at all. Take, for instance, a line from Edy where she says “Didn't I tell you, Jade, I got a black belt in shotgun” while blatantly holding a sub-machine gun. Perhaps there were so many business/vehicle owners to hook into a cameo that there wasn't time for a second draft. 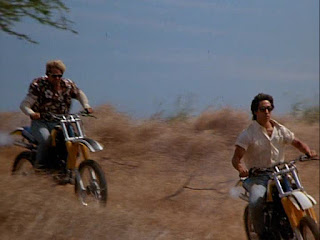 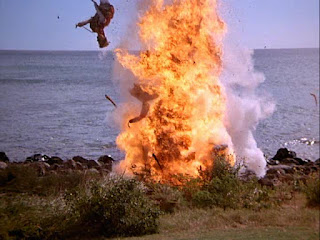 “Did you know I had rug burns on my rear for a week?” The infamous Hard Ticket To Hawaii may have had a similarly bloated cast and a frenzied 'chuck everything into the pot' sensibility, but Picasso Trigger struggles to maintain that approach. The whole sub-plot involving Las Vegas isn't necessary in the slightest and is pretty much a textbook definition of irrelevant. Kym Malin and Patty Duffek return as Kym and Patticakes, but their dance show numbers and dealings with sleazeball Shiavo (Nicholas Georgiade, Stacey), have no real need to be there. About the only thing that plot line contributes is another dictionary definition – this time of the word “gratuitous” – as Kym and Patticakes pad out the running time with some after work relaxation T&A to boost the film's somewhat flagging quotient of bared skin (again, relatively speaking). 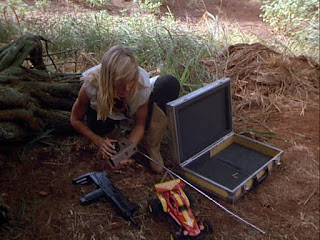 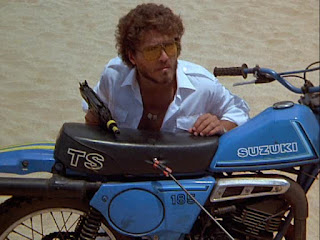 “Living good is the best revenge.” As previously mentioned, the first half kind of plods along creakily and the viewer's heart begins to sink: perhaps Donna and Taryn's previous adventure was a one-off? But then the ladies get back into the fight and shit goes crazy! Gun fire, chases, explosions, body doubles, triple-crosses, and Bondian weaponry all serve to slap the viewer awake and get their hearts pumping again as soon as Taryn takes down a handful of gaudy shirt/gun-toting guards on her own. The boomerang loaded with dynamite is one thing, but Travis' bizarre 'crutch gun' – which necessitates that he perform a life-endangering fake limp as he enters the main bad guy's beach house! – is something else. Not only is it a shotgun (the shells are hidden inside the fake cast), but it also sports a device that measures radiation and, rather conveniently, can track the coordinates of a pace maker (what?!) for a hilarious final flourish. Now that is what we signed up for! 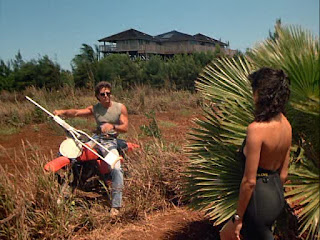 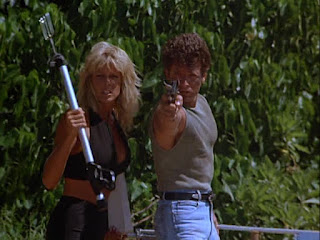 “I don't have a jealous bone in my body.” / “Is that a fact?” / “Check it out.” The film may be a big bloated mess in some ways, but it's also an utterly silly good time. Where else would you find a secret Agency where being constantly horny and hooking up with your team mates seems to be a pre-requisite? The massive cast does leave the leading man kind of sidelined for a lot of the movie, and the viewer will likely struggle to understand what on earth is going on most of the time (even with a few exposition dumps), and that's all without even mentioning supposedly important characters like Toshi who basically do nothing except provide some cannon fodder. However, the 'Sidaris-verse', if you will, had figured out a decent formula … albeit an unruly, unfocused, over-complicated one. 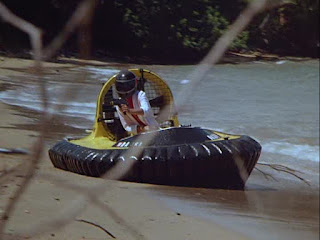 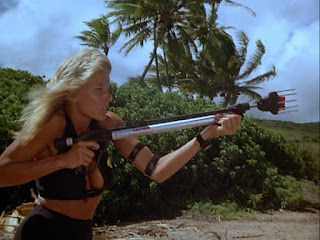 “Man must learn from God's creations to protect all that is beautiful.” Fans of Hard Ticket To Hawaii who are looking for another hit of Sidaris' own very particular drug will find much to enjoy here, and discover some familiar elements. Harold Diamond (Trained To Kill) returns as Jade, the pony-tailed martial artist with a low tolerance for shirt buttons (or shirts in general), as does Cynthia Brimhall's restaurant owner/Agency member Edy who gets a larger role this time, while that cow skin briefcase from Malibu Express (1985) makes another appearance, likewise Molokai Cargo, the successful cover business run by Donna and witness protection/part-time agent Taryn in their spare time. While Picasso Trigger may fall short of such lofty heights in barmy cinematic joy, it nonetheless sports the same sense of up-for-anything fun, that wheeling and dealing spirit, and that over-the-top American nature of its predecessor.
Posted by Nick Thomson at 10:57