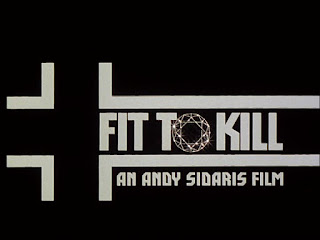 “It's the sexiest scheme on the screen since James Bond discovered Pussy Galore!” After the somewhat paint-by-numbers Hard Hunted, which lacked some of the vim and vigour of previous outings in the wild and wacky world of Andy Sidaris, Fit To Kill splashes some refreshing Hawaiian water on the franchise's face. Dosed-up on American bravado and topless coffee breaks, it's all about a few simple things: More action! More sex! More cheese ball dialogue! And more, many more, remote control toys!... 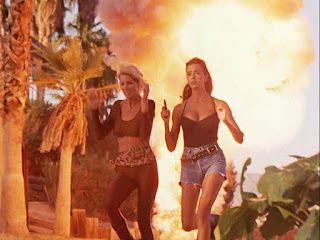 “You'll be disappointed the day I see you hang.” / “As a condemned man you have to accede to my last request.” After the events of Hard Hunted, which saw criminal mastermind Kane (Geoffrey Moore) fail to secure the Klystron Relay for, as it transpires, fellow crime lord further-up-the-food-chain, Po (Craig Ng), sexy assassin Blu Steele (Julie Strain) is sent to dispatch Kane – only for the charming villain to employ her to assist in his quest to steal the Alexa diamond, which supposedly reformed criminal mastermind (yes, another one), Chang (Aki Aleong) wants to give back to Russia now that the Cold War is over. Following so far? Just barely? Yeah, get used to that feeling. 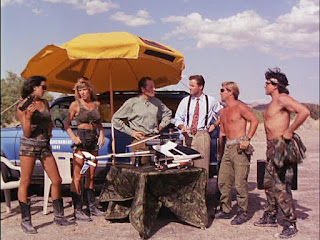 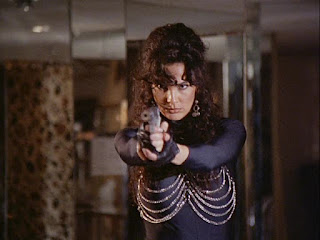 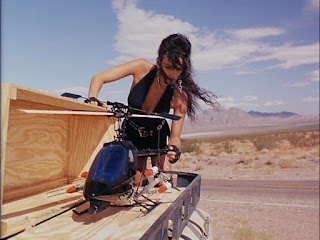 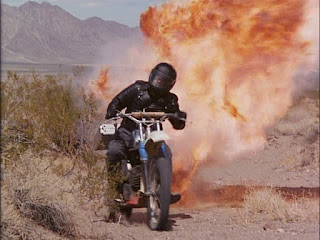 “Now we go to the hotel.” / “I like hotels.” Sounds like an intriguing set up, doesn't it? Alas, writer/director Andy Sidaris never really makes the most of the idea of stripping Donna of her credibility, as the photos Blu Steele brazenly snaps aren't really put to much use, while fellow agents Nicole (Roberta Vasquez, Do Or Die) et al barely question Donna's rock solid loyalty to law and order. It's an odd choice, although what's just as curious is the attempt to soften Kane – particularly in Donna's eyes, as she's spent two movies escaping his attempts to kill her and her friends. Through a fleshed-out back story that tries to excuse Kane's evil ways because of childhood trauma and a thirst for revenge, Sidaris brazenly marches forth in trying to make Kane a little cuddlier – going so far as to have Kane experience romantic daydreams about Donna, whose superior resilience has broken through his cold criminal exterior and penetrated his feeble heart. Mind you, we the audience are never expected to take anything seriously, so why should Sidaris himself? Just roll with it! 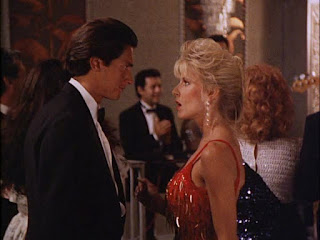 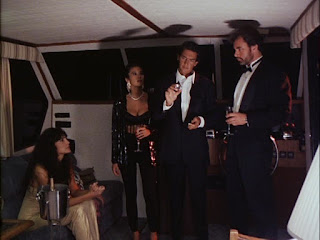 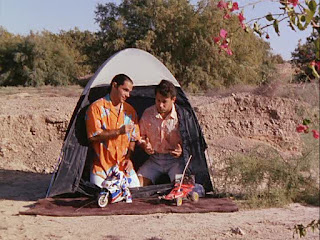 “Our dance had nothing to do with music.” The eighth entry in the 'L.E.T.H.A.L. Ladies' saga was Dona Speir's seventh cinematic rodeo with Andy Sidaris (having first appeared as Donna Hamilton in 1987's Hard Ticket To Hawaii) – and it would also be her final appearance, as the Playboy Playmate turned sultry action star moved away from her film career in the mid-1990s to pursue a new life as an addiction and recovery counsellor and advocate for animal rights. As the longest recurring character in the Sidaris-verse, Donna brought a strong sense of continuity amidst the changing casts and characters throughout her time in 'The Agency'. She also combined butt-kicking with whip crack smarts and dazzling looks, so the series would never quite be the same again after losing its main lead, even with a bus load of familiar faces remaining to carry forward this very particular, and often times peculiar, torch. 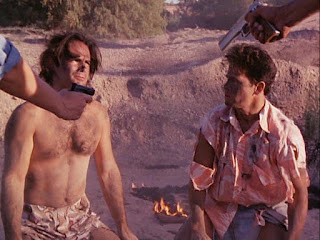 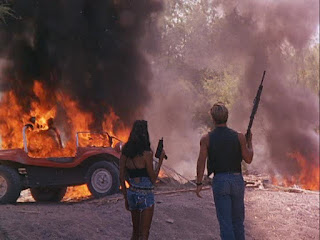 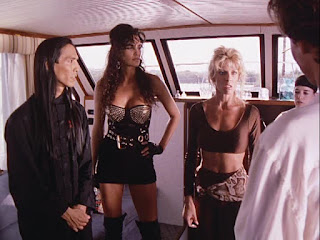 “That's quite a piece of machinery you have there, flyboy.” / “It's long.” / “It's quick.” / “It's hard.” / “It's dangerous.” / “It's aggressive.” / “It's deadly.” While Fit To Kill represents the last appearance of Dona Speir in the Sidaris-verse, it also acts as the first appearance of the series' other key regular player: Penthouse Pet of the Year Julie Strain (The Dallas Connection). She was to play a handful of characters throughout this and the four remaining films in the series, and her statuesque height (6ft 1'') certainly helps pose her as a credible threat to any of the male characters, whether she has them at the end of her gun or high heeled boot. From the get-go you can instantly tell why Sidaris would go on to cast her again and again, as she combines aggressive sexuality with a gung-ho attitude on-screen – with much of the cast having to perform most of their own stunts, these films were no place for delicate flowers. Whether she's firing off a machine gun, piloting a deadly RC 'copter, or enticing her way into Captain Burke's trousers (could anyone else pull off the 'ninety degree lean over a sink to lap at tap water' seduction technique?), Julie Strain approaches it all with unbridled gusto – just the kind of vibe that'll power you through an Andy Sidaris movie! 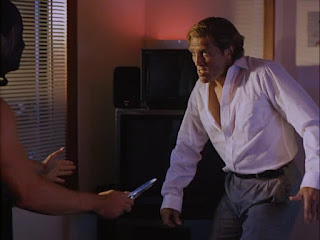 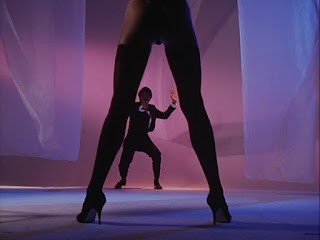 “What are we doing in a toy store?” / “This time we're gonna do it a bit more scientifically.” Those familiar with the movies of Andy Sidaris will have recognised a recurring theme (among many) of remote control toys – cars, helicopters, planes, boats – and Fit To Kill brandishes this obsession from start to finish. Riddled with explosives-laden RC 'copters from the get-go (check out those gargantuan remote control units!), Sidaris goes so far as to set an entire scene inside a toy store specialising in RC models. The climactic battle is even fought between two duelling RC 'copters, for goodness sake! Considering the onslaught of gunfights and car chases depicted in these movies, this charming little fascination makes for a nice counterpoint to all the jiggling boobs and exploding baddies. 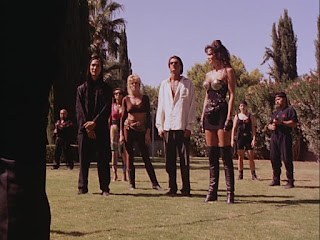 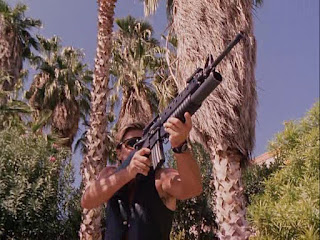 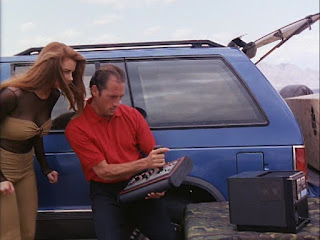 “Captain Burke, you naughty nautical buoy. Anchors aweigh!” Did someone say “jiggling boobs”? Yes, they sure did, and at this point having struck well into the 1990s, it is evident that the dial controlling the salacious goings-on has been turned up a notch. From bikini-clad waterfall chill-outs to bikini-clad hot-tub hangouts at K-SXY radio to bikini-clad Agency meetings (hey, I'm sensing a theme here), plus a seemingly endless supply of revealing clothes and steamy bonk sessions on-the-job, Fit To Kill ramps up the raunch, seemingly energised by new arrival Julie Strain hopping aboard the 'L.E.T.H.A.L. Ladies' runaway locomotive. Some of the more cursory T&A scenes of past films, which were crowbarred into proceedings for a few fleeting moments (see Picasso Trigger), have been shunted aside in favour of more elaborate scenarios involving soft focus mist-strewn dreams and hazy, flowing flashbacks. And yet, even all these skin-on-skin shenanigans have a somewhat old fashioned vibe to them, as the horned-up agents of 'The Agency' are often depicted as being in monogamous relationships spanning across several movies (e.g. Edy and Lucas, Nicole and Bruce). There's a striking sense of the casual meeting the committed to the intimate relationships throughout the franchise, which feeds into the whole vibe of Sidaris' dozen-strong collection of saucy action flicks. 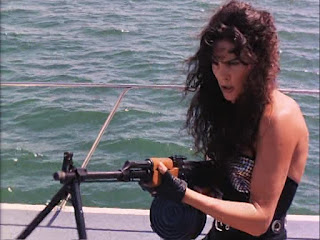 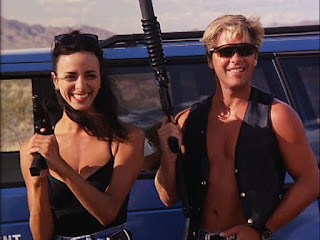 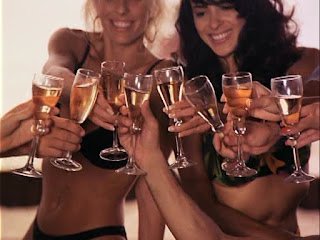 “In America anything is possible.” Shaking off the 'going through the motions' feel of Hard Hunted, Fit To Kill feels like everyone involved was having a bit more fun, even if the movie cheekily copies & pastes a couple of tired scenes from the previous movie (Shane vs Sandy at the hot tub shooting range, for instance). Indeed, some of the shots might actually be pinched from previous flicks! However, the generally refreshed feel seems particularly true for Sidaris himself, who amplifies the exploitable elements while injecting an added sense of flair to his usual proceedings. Naturally, there's still a few questionable moments to be found in the mix (Mikael's ruse to impress Ava not into bed, but rather the nearest sturdy surface, and her decidedly casual reaction, certainly show off the film's age), but it would be unfair and not in the least bit asinine to condemn a 26 year old movie – especially of this variety – because it fails to adhere to the shifting sands of present day virtuousness. To do that would be to not only brandish a lack of humour and understanding of context (and even the space-time continuum itself), but also completely miss the point of Sidaris' movies, which were only meant to be a quick injection of fun, stitched together as they were in a bygone era. Clearly, a film that ends with a swimsuit & champagne celebratory dip in a radio station hot tub (and not for the first time) is not meant to be taken seriously. As Dona Speir's final outing in the franchise, Fit To Kill is a fitting swan song.
Posted by Nick Thomson at 17:29