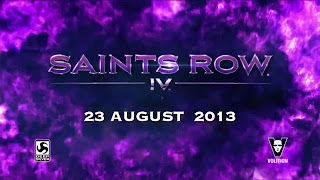 Click “READ MORE” below for lots of screen shots and what to expect from Saints Row IV...


Craziness:
Saints Row The Third was pretty bonkers throughout (remember the Tron-like level where your avatar was a toilet?), but it looks like Saints Row IV is going to even sillier heights – an alien invasion, gigantic guns, insane weaponry capable of inflating or freezing citizens, monster trucks, and a giant Saints Flow drink mascot stomping about the place like Godzilla are just a few of the bizarre sights seen in the teaser. 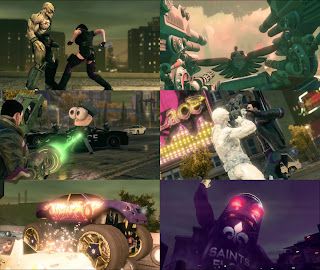 Sci-Fi:
Speaking of aliens, it looks like the fourth entry will be looking to dive into the realm of science fiction. Flying mech warriors, alien craft hovering over the city, laser guns and more. Can we also surmise from the trailer that the Saints Row gang have now entered the world of politics? 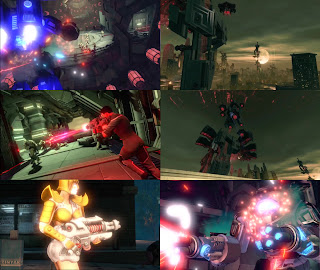 Super Powers:
Things also seem to be taking a comic book turn with the apparent ability to gain superpowers such as being able to run incredibly fast, leap tall buildings (a la Crackdown), perform devastating super punches, and even fly. Sexy/Awesome:
Following on from the previous game's gleeful obsession with all things over-the-top and tantalising, you'll again be able to craft your own persona and dress them (or undress them) as you see fit. Expect plenty of saucy humour, but also expect lots of OTT action – rocket-launching guitar cases, atomic nut shots, and the obligatory dancing mascots, and vehicle surfing will also return. 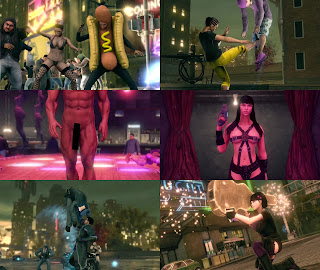 In Conclusion:
Saints Row The Third was immense fun, but it had a few minor issues (although nothing as major as mission-wiping glitches or highly inconsistent difficulty like in Saints Row 2). Hopefully we'll regain the option to replay individual missions, as well as some activities that were removed (in addition to new fun and games). Mixing things up a little in the side missions/activities would be welcome – I'd gladly trade the pimping missions for something else, and a new spin on the mechanics of these optional asides would put a fresh lick of paint on things. Extended customisation would also be very welcome – the extremely diminished abilities to personalise your cribs in SR3 was disappointing.

Speaking of fresh licks of paint – the engine doesn't seem to have been changed much – the footage looks identical to that of the previous game. There wasn't a big leap between the first and second games (but going from SR2 and SR3 was a huge step up), but hopefully this won't feel like an extended DLC title and will instead be the fully-fledged sequel we fans have been champing at the bit for. We don't want a rinse/repeat re-heat of what's come before where little changes or moves forward, but we also don't want SR4 to lose the core reasons why SR3 proved to be so utterly enjoyable – it's a tricky balance to strike, but it can be done.

Hopefully we'll be seeing some more footage in due course, like that memorable 10 minute preview of SR3.
Posted by Nick Thomson at 17:18