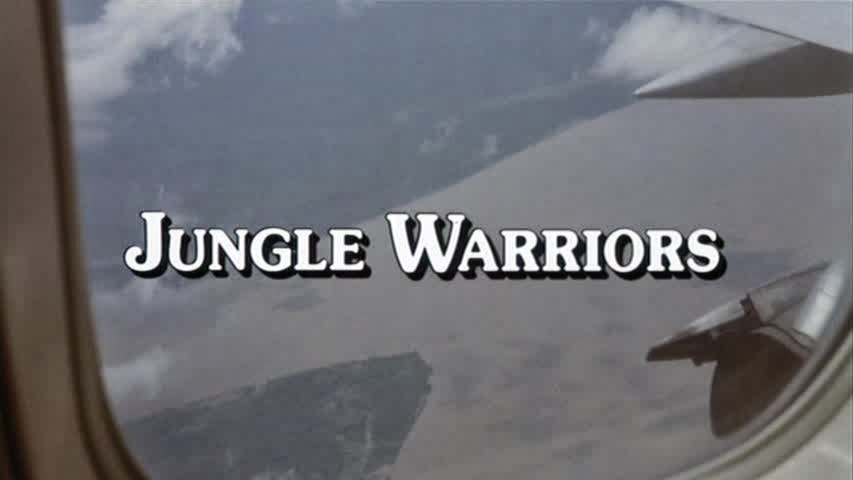 “I find ways to amuse myself.” In the steamy South American jungle a group of models have arrived for a photo shoot, just as a major drug deal is about to go down. Cesar Santiago (Paul L. Smith, Crimewave) is a major producer of cocaine and all-round ruthless drug lord, while Vito Mastranga (John Vernon, Dirty Harry) is an American crime boss who's got the money and connections to shift Santiago's powder. There's a mountain of money to be made, but will their respective arrogance turn the whole deal sour? 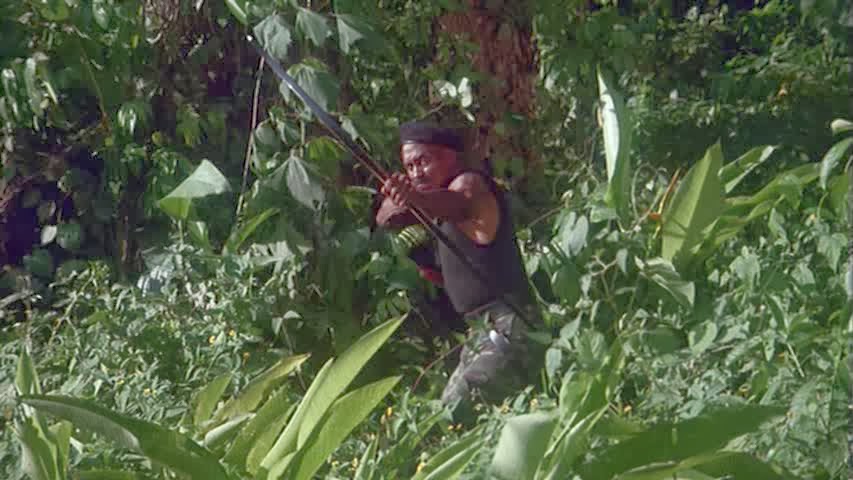 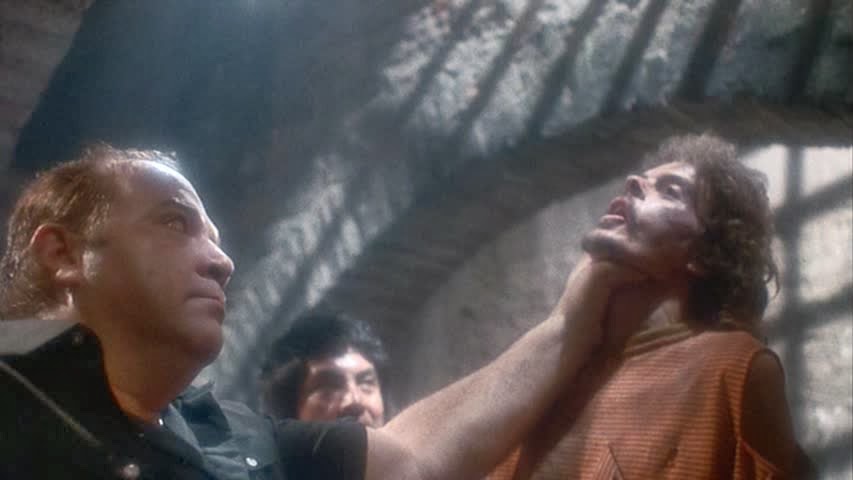 “I got qualudes, I got cocaine, I got everything you want, any game you can name any amount you can count.” With a powerful sense of bad timing, a bus load of beautiful models arrives in town for a fashion shoot, accompanied by their photographer Joanna (Nina Van Pallandt), and their coke-fuelled art director Larry (Marjoe Gortner, Starcrash). She's got her head screwed-on while he's full of bluster and cheesy stories about being a soldier that he uses to impress Marci (Mindy Iden), an apparent tourist who's decidedly keen on joining their expedition into the jungle. 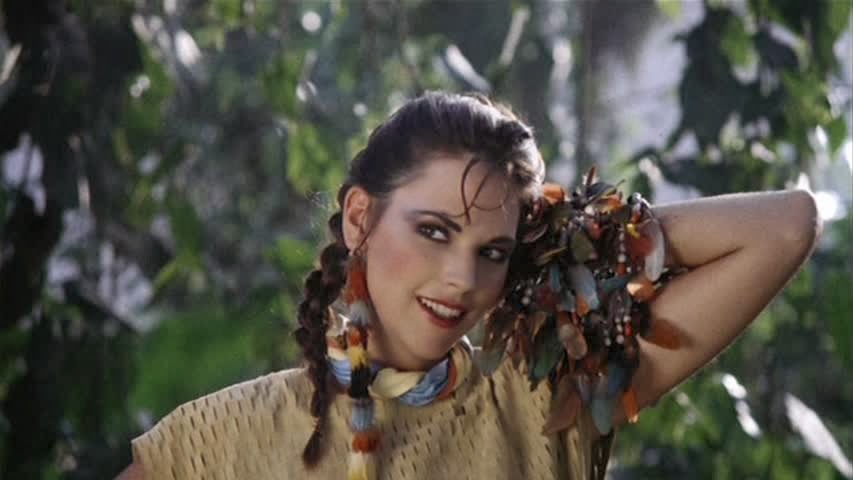 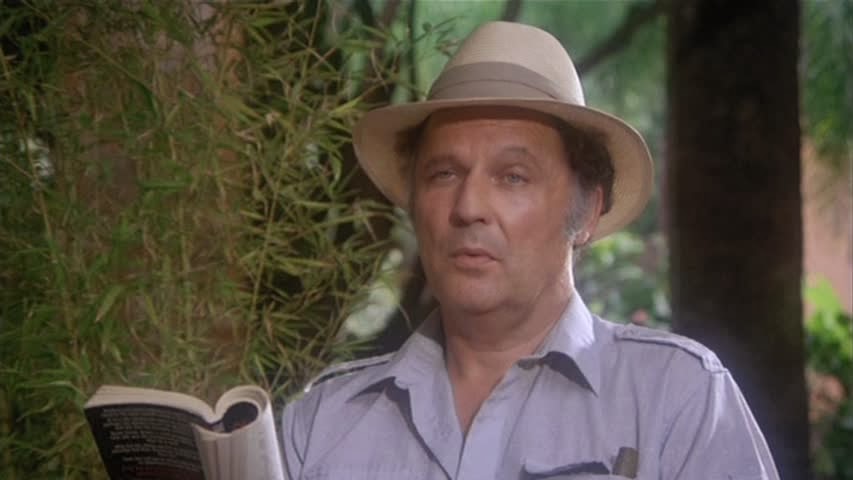 “Down here you can think of me as God.” After Larry and hired local pilot Ben (Kai Wulff) butt heads over the safety of a waterfall location, the group are shot down by the roaming paramilitary, led by bow-and-arrow fan Luther (Woody Strode, Spartacus). High heels and mud don't mix as the group head in-land to try and evade the deadly guns-for-hire, menaced by snakes and baby 'gators along the way, but – naturally – everything goes south. In spite of brief success as a wannabe Green Beret, Larry is skewered by a spring-trap and the group is captured. 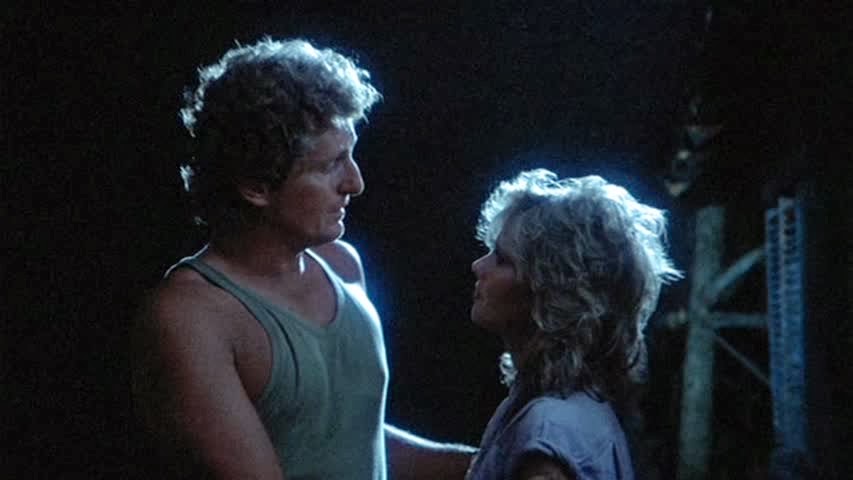 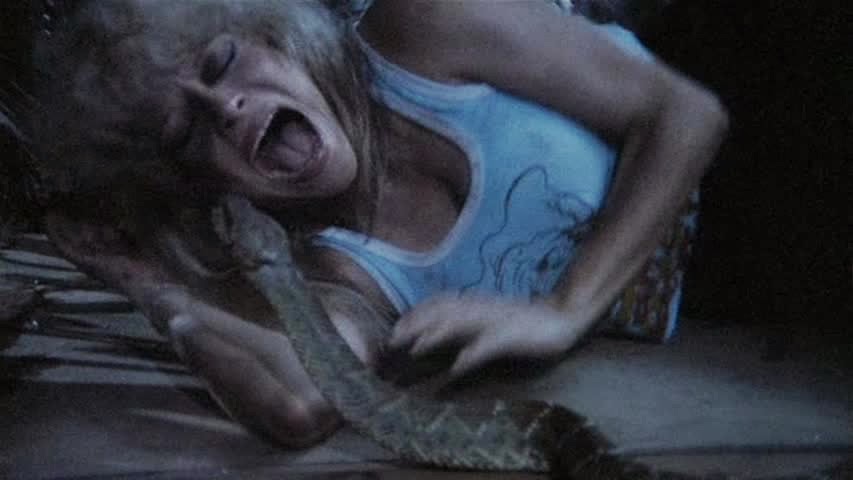 “Fat man, pig, who sleeps with his own sister, you're nothing but death waiting to happen.” Presented to shifty-eyed drug baron Santiago and his stately sister Angel (Sybil Danning, Halloween remake), the girls' ordeal just gets worse as they're soon imprisoned, interrogated, and subjected to a disturbingly feral en-masse gang-rape by the wide-eyed-and-gurning goons. Suffice to say, they're put through the wringer, but perhaps tag-along Marci can be of some help as tensions run high when Mastranga and Santiago finally meet to discuss their deal. 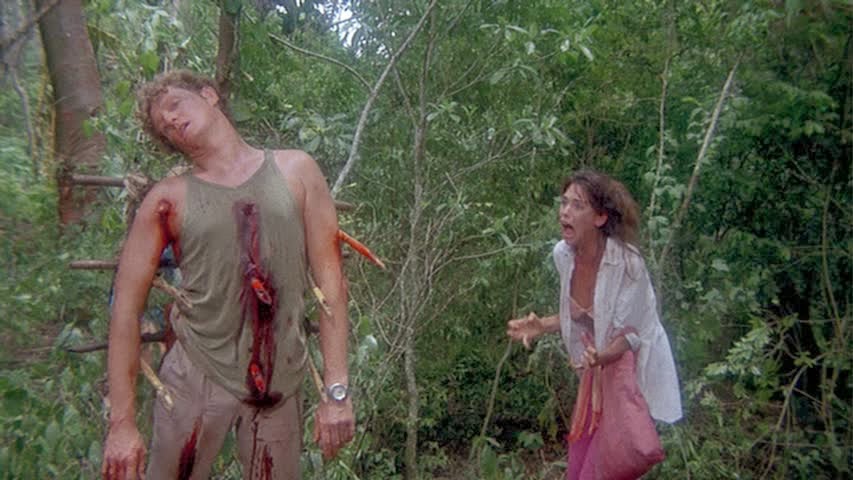 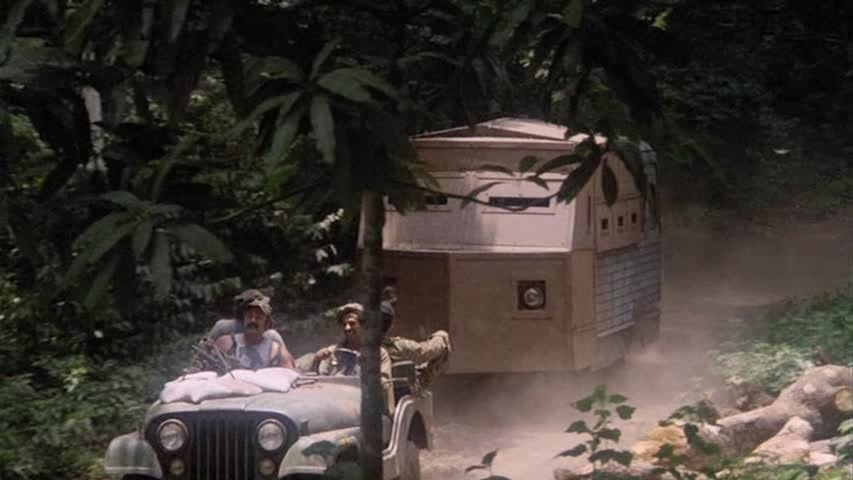 “They perceive everyone as a threat that isn't working for them.” Like a cheesy mid-80s action movie should be, Jungle Warriors is filled with iconic-looking villains, beautiful gun-toting babes, nose candy, juicy slow-mo squib hits, and ample helicopter porn. Filmed in Mexico with the help of the local army, director Theumer has plenty of toys to play with, as well as a vast array of background extras, and a suitably impressive range of locations. Huge bright orange explosions billow into the air, arrows pierce bodies, machine guns are fired-off with gleeful abandon, and choppers fly around all over the place. 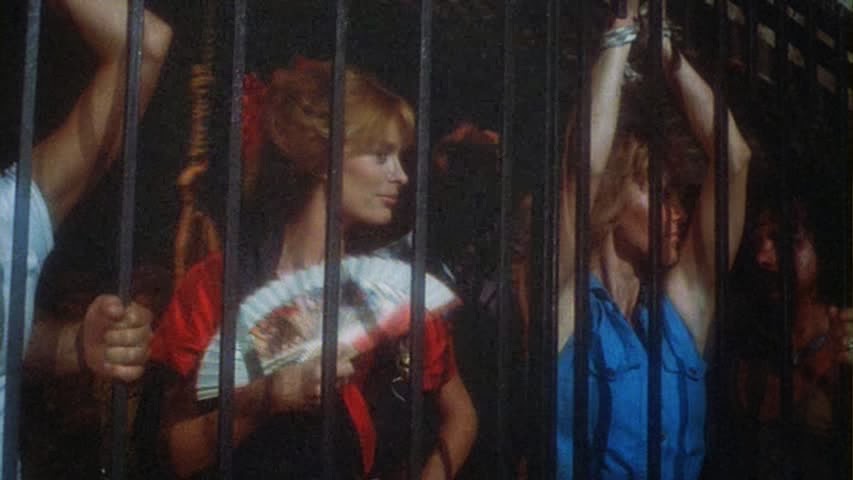 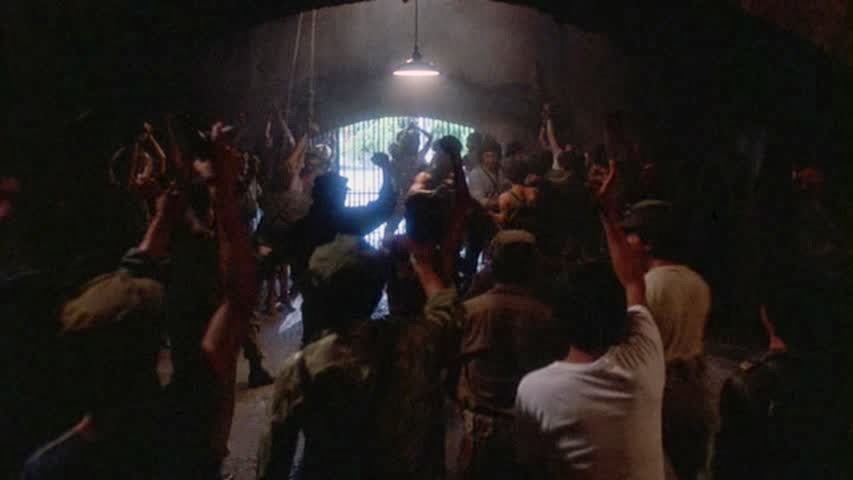 “I deal in bullshit!” However, Robert Collector (Red Heat) and Theumer's script feels somewhat lacking. It takes a curiously long forty minutes to get the girls within Santiago's clutches, and in spite of a background plot involving the Pan-American D.E.A., the big deal kind of feels like a big bust that everyone has been kept waiting far too long to witness. On the other hand, after their brutal ordeal at the hands of Santiago's hired goons (every one of them a detestable pig), the ladies – and the audience – get the chance at some (cleavage-filled) revenge. Unfortunately for fans of Sybil Danning though, the imposing icon of exploitation flicks gets very little to do. She elevates proceedings during her all-too-brief scenes, but her part feels underwritten in favour of numerous thumb-twiddling scenes between Mastranga and his nephew/lawyer Nick (Alex Cord, Airwolf) as they wait, and wait, and wait for their meeting with Santiago. 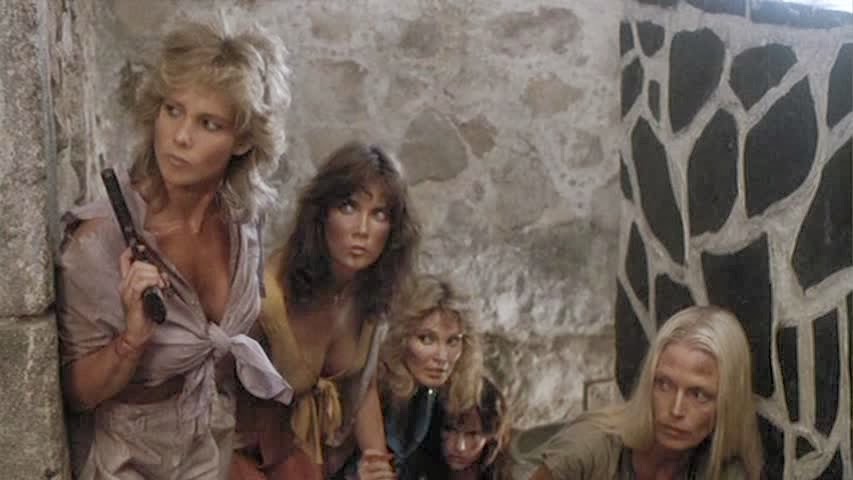 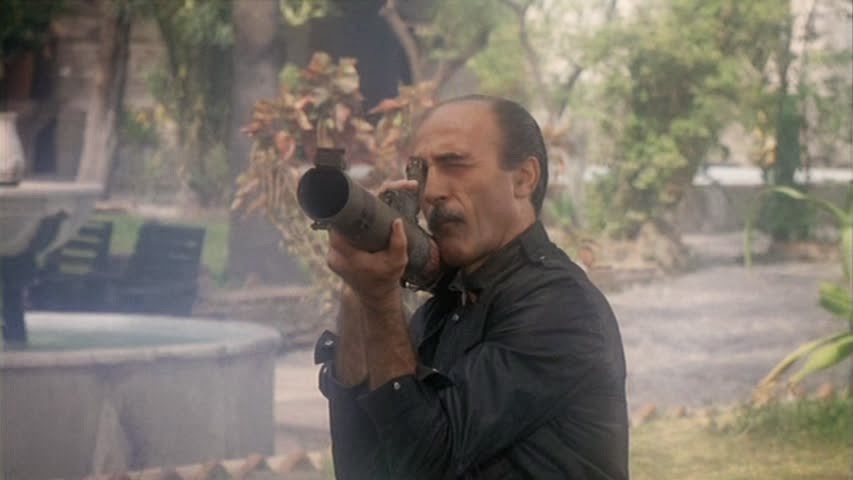 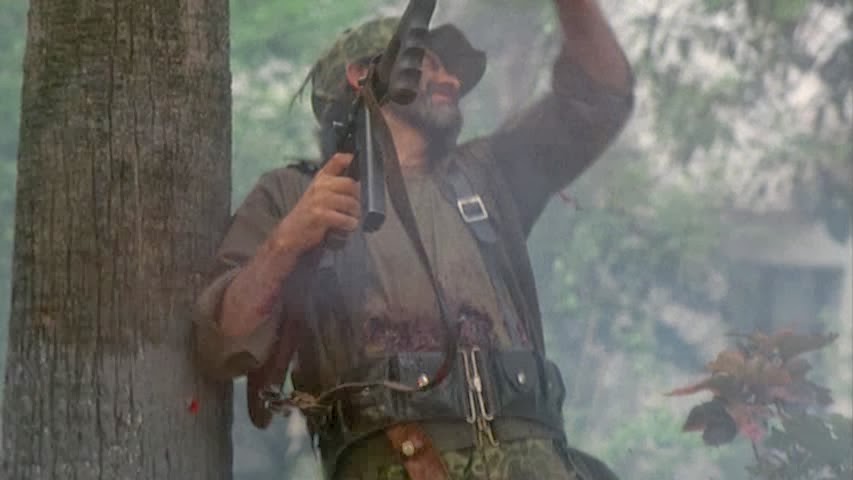 “Silence is bad for your health.” Featuring a truly dreadful themetune – filled with agonised vocal caterwauling and missed high notes – Jungle Warriors is a mixed bag outing. The pace is uneven, and the plot isn't particularly arresting, but it does feature a good dose of action come the finale. Santiago makes for an entertaining near-pantomime villain (and he has a wonderfully blunt bulk-vs-bulk punch-up with Mastranga's body guard), and the 'foreign visitors thinking they're smarter than the locals' undercurrent to the script is a nice touch. It could have – and should have – been better, but there's enough sleaze and bloody retribution to appeal to most B-Movie freaks. 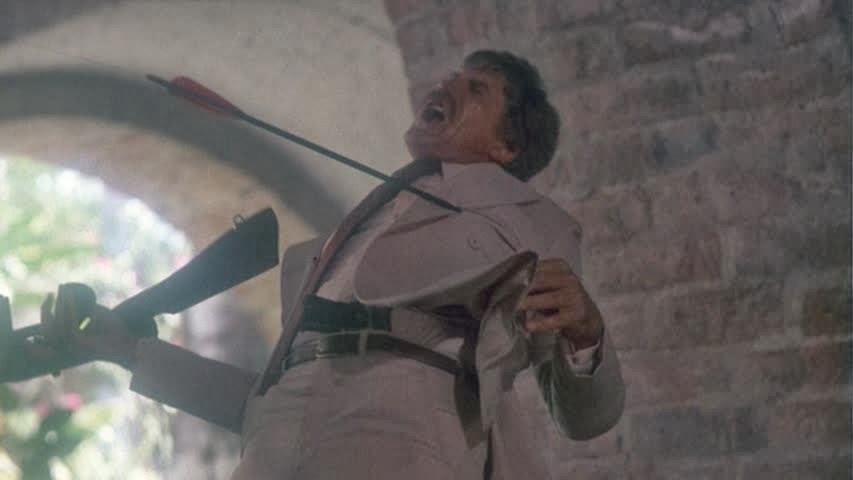 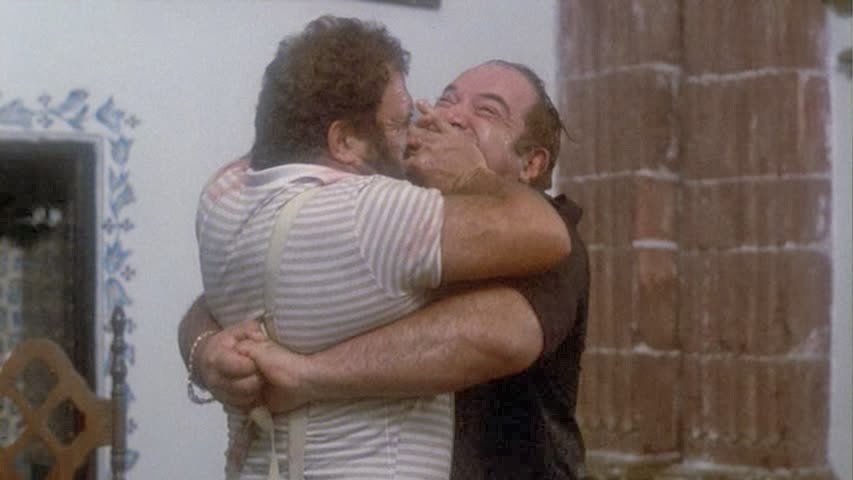 “We're under the deal of the decade and they're gonna bury us.” Panik House Entertainment's DVD presentation is pretty solid, although the print does feature its fair share of grain and noise (particularly in darker scenes), however the film is noticeably cut. No doubt a product of the mid-80s crackdown on violence by the MPAA, the film's climax features up-to 23 seconds of trims (hat-tip to the indispensable MovieCensorship.com), which prove to be frustrating. Most egregious are the poorly excised death of one of the main goons, and a gory end to one of the key villains via the blades of a helicopter. Furthermore, beyond the Danning/Vernon connection to Chained Heat, this film shouldn't really be in this collection as it's decidedly not a 'Women in Prison' movie (they spend just a few minutes worth of the film behind bars), although unlike the more serious-minded Red Heat, Jungle Warriors certainly plays to the exploitation B-Movie movie crowd. 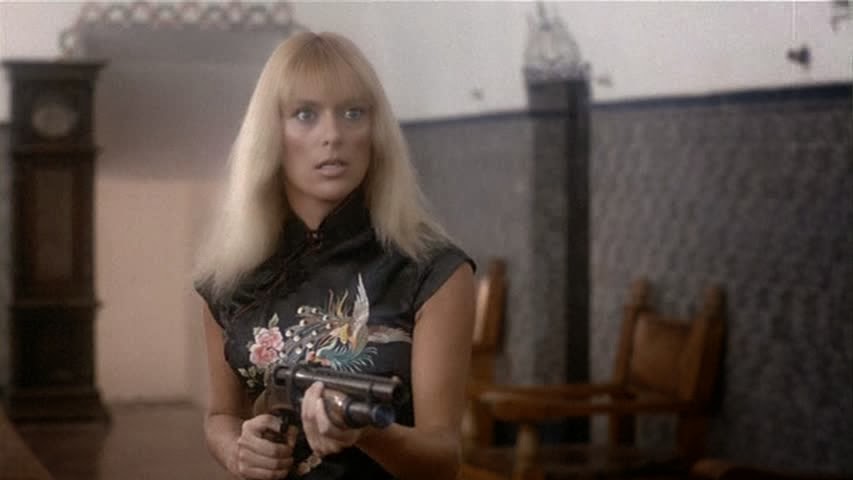 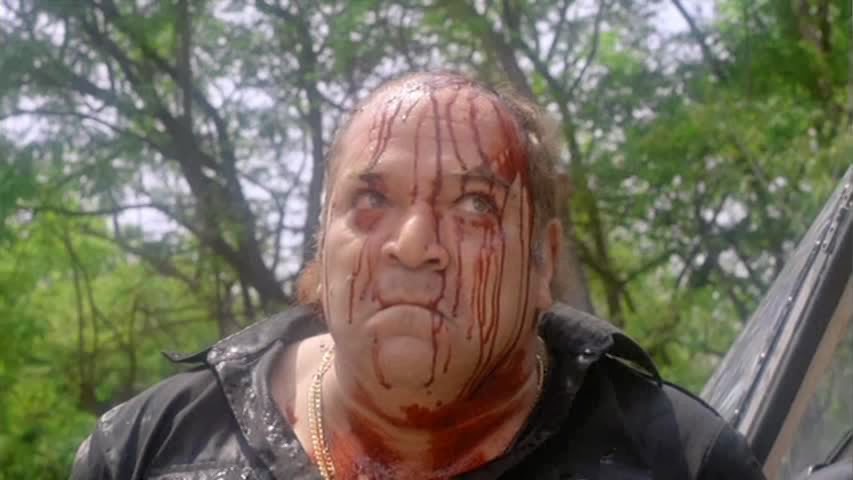 This film is reviewed as part of the Panik House Entertainment triple feature double disc DVD, accompanied by Chained Heat (1983) and Red Heat (1985).
Posted by Nick Thomson at 18:46