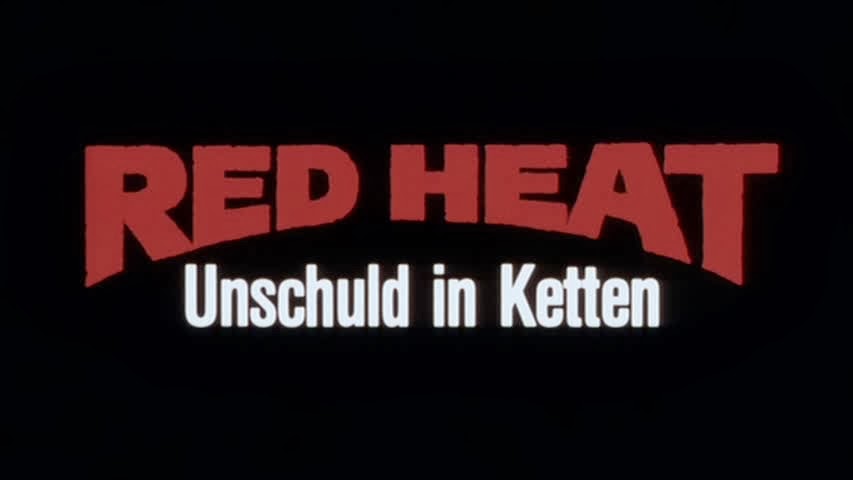 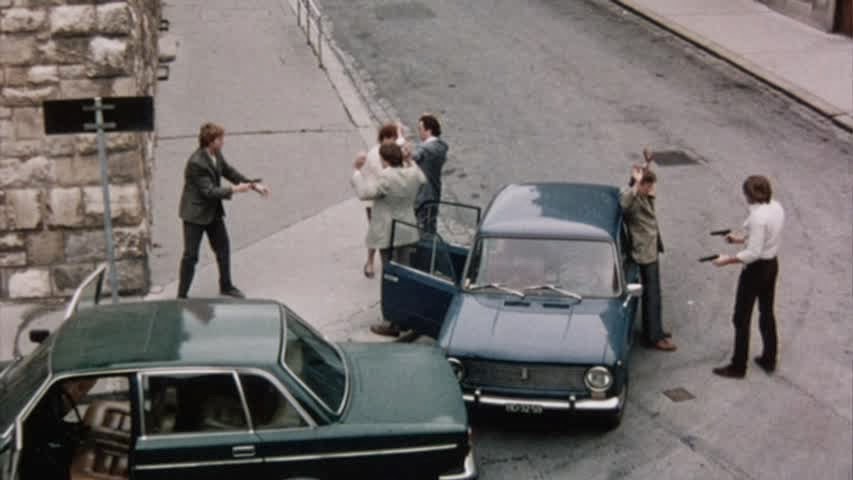 “I'm so happy to be here, I can't believe it.” Rosy-cheeked Christine (Linda Blair) arrives in West Germany to marry her American soldier boyfriend Michael (William Ostrander), retiring to a beautiful countryside resort to get reacquainted. However, Michael has rejoined the army without consulting her and so, getting some space to organise her thoughts, Christine finds herself in exactly the wrong place at exactly the wrong time. 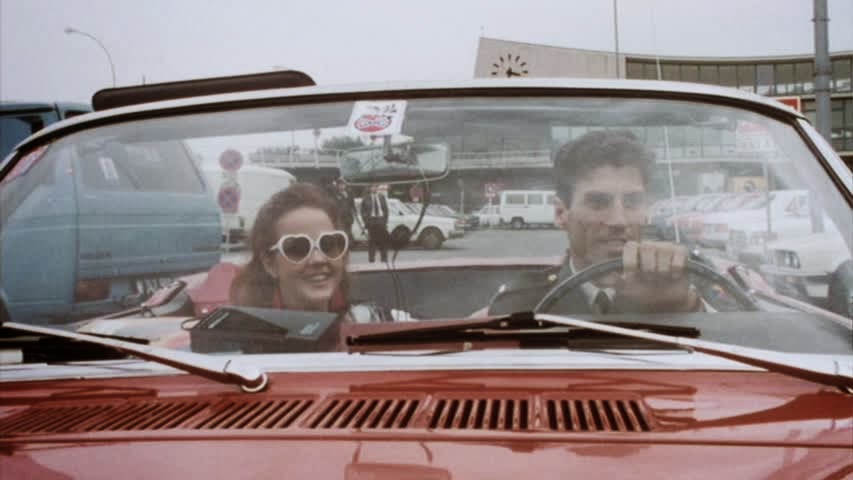 “Gold is still gold, even if it's used to buy political prisoners.” Hedda (Sue Kiel) is a Bio-Chemist and East German defector, seeking asylum just across the border, but secret government agents have surreptitiously hopped over to grab her before she can reveal her research to the enemy. Unfortunately for Christine, she witnesses the abduction in the hotel car park, is captured by the East German spies, and taken across the border as her boyfriend sleeps! 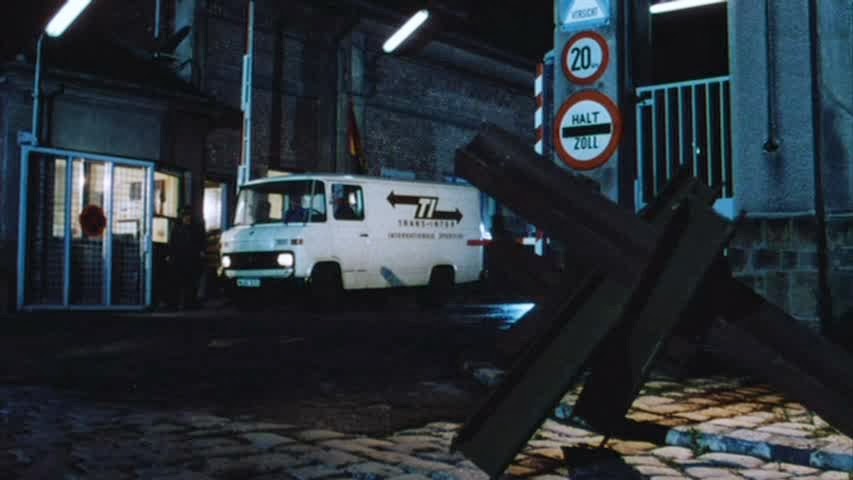 “No God-damn it, you can't do this to me, I'm an American!” In the cold light of day, and extracted from a hidden compartment in the abductor's van, Christine finds herself staring at the harsh façade of a communist prison. Suffering day-after-day of insistent questioning by shadowy figures who never show their face, and driven to make a false confession, her torment is only just beginning – and she's sentenced to three years for being a 'CIA operative'. 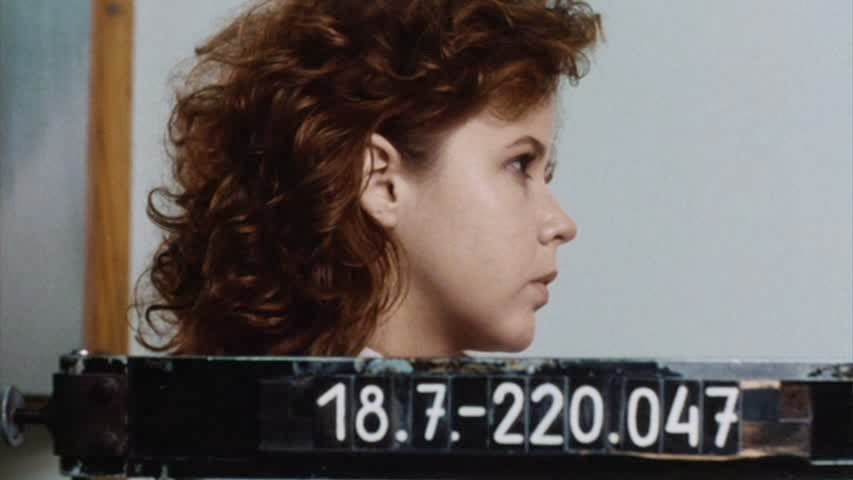 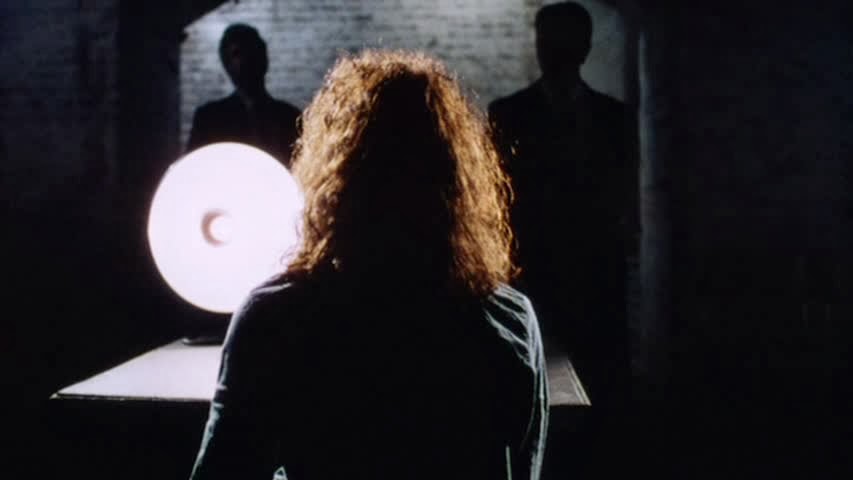 “You are no longer an individual, but property of the state.” Stripped of her rights and her identity, Christine is thrown into the harsh reality of the prison – an unforgiving fortress to house political prisoners – an institution that's run on-the-inside by Sofia (Sylvia Kristel, Emmanuelle). This fire-haired mistress is a cruel operator, with her fellow inmates and the Wardress alike (for whom she indulges sexually) under her thumb. Supported by a gang of ferocious goons – all personally branded by Sofia – she runs a tight ship where torment is the name of the game. 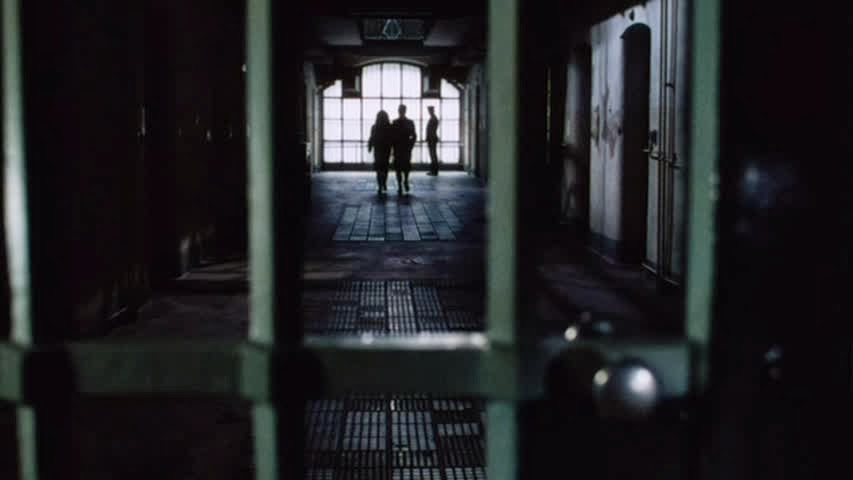 “Practicality's all that matters if you want to survive here.” Glimpsed in the roaming searchlight, the cell block plays host to Sofia's nocturnal group affairs where she submits the weakest inmates – such as Barbara (Kati Marothy) – to forced humiliations just to further drive home their sense of hopelessness. Sofia's in for life and has nothing left to lose so, as advised by Meg (Barbara Spitz), Christine's best chance is to keep her head down and do as she's told whether she likes it or not. Indeed, with the Wardress and her cohorts seeking answers from Hedda, Christine soon finds herself violently coerced into befriending the defector to extract her secrets. 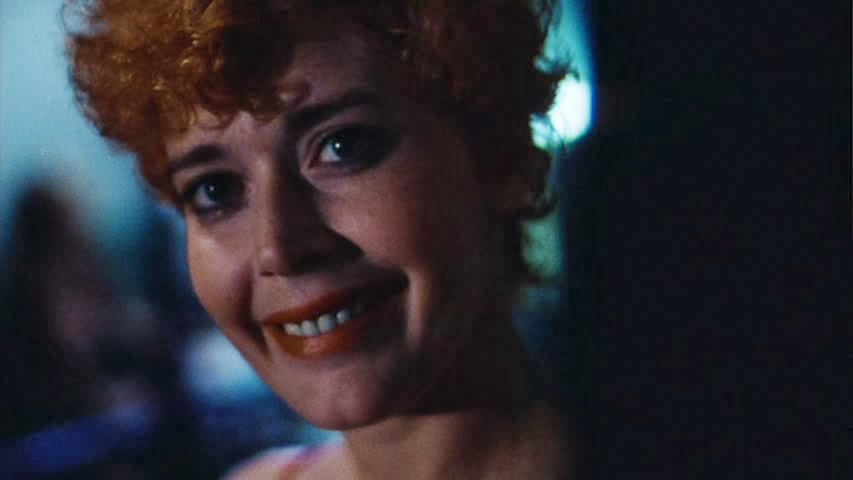 “Burn this letter, you never got it, I never sent it.” However, even when it seems all hope is lost, Michael refuses to give up – even if his military, and his government, seemingly have. Will he get his girl back, and if he does, will she still be the woman he was set to marry? 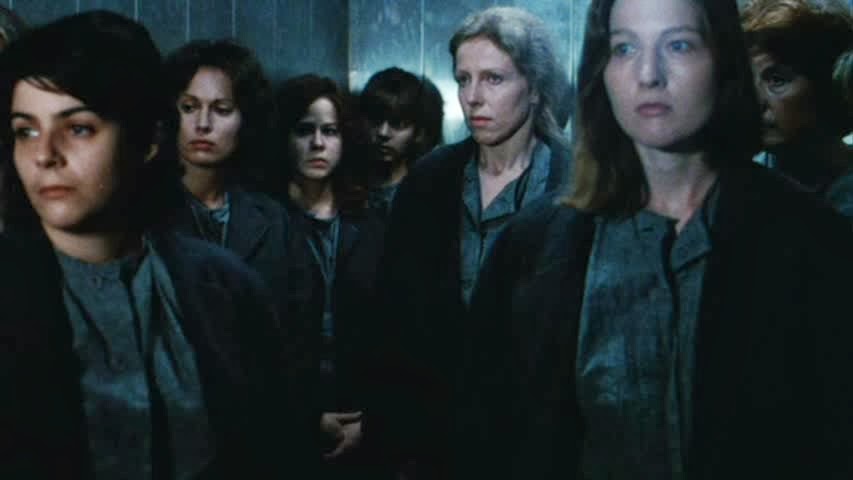 “You're enemies of the state, it was your choice.” Increasingly bleak as the film progresses, Red Heat firmly places the viewer inside the grey stone walls and gloomy corridors of this prison. The inmates are put to work, practically as slaves, traversing the facility in drab uniforms to operate mind-numbingly repetitive machinery – each clunking movement a further hammer to the nails in their coffin. The prisoners march in silhouette like oppressed automatons, the tragedy of the situation writ increasingly large across Christine's pale and drawn face, as she moves from innocent college girl to broken victim of a communist state to dead-eyed challenger to Sofia's crown. 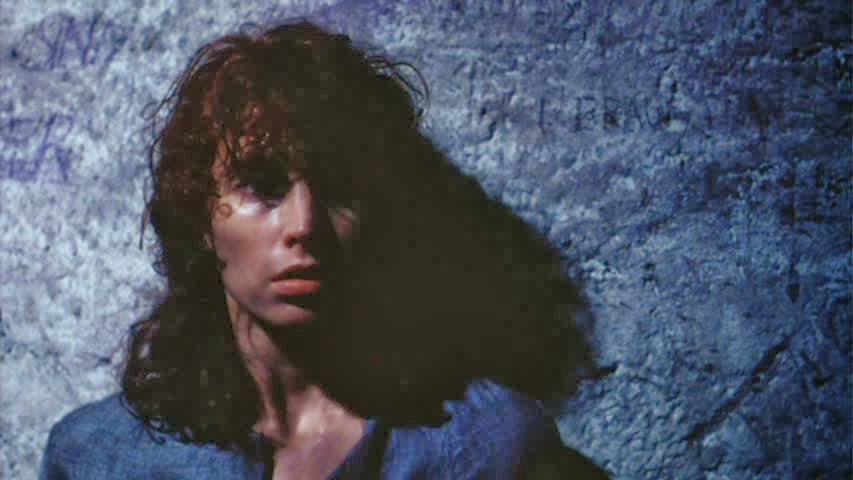 “That's the lovely thing about the People's Republic, you come here, you make friends for life.” Robert Collector's vision for the film is as strong and resolute as the propaganda films shown to the inmates which speak of 're-education' and the 'glorious ideals of the Communist Party'. The faceless government is forever cast in darkness, and the deliberate pace successfully ratchets up the system's power over Christine and her cohorts. Collector and Gary Drucker take time with their script to establish the characters properly, giving the viewer enough to lose, and more than enough injustice to feel throughout the bulk of the running time. Christine's abuse at the hands of the state hollows out her soul, while Sofia is a sinister (if slightly under-written) presence that provides a focus point for your hate, and Michael gives good all-American hero to right the wrongs in a very 1980s way. 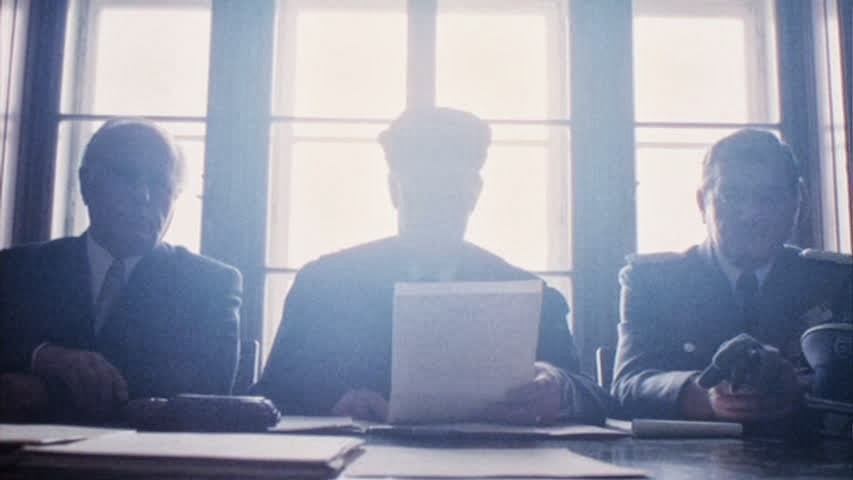 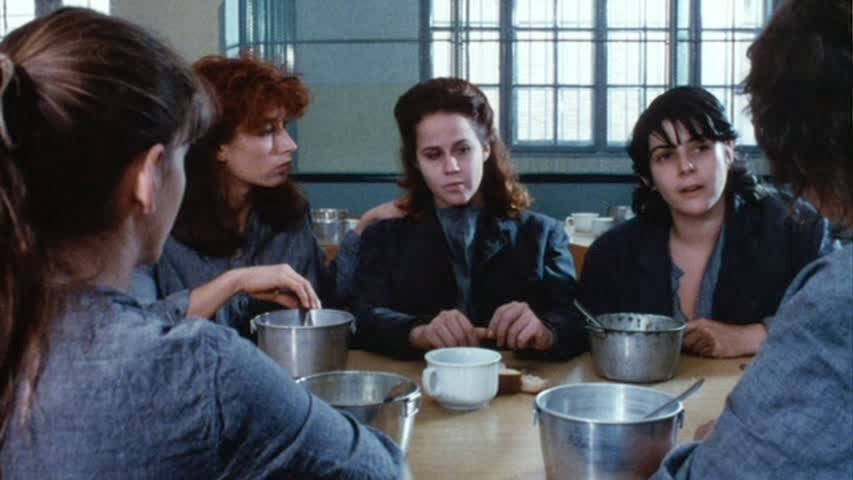 “We need results, not victims.” Staging the bulk of the climactic gun battle in shadows, silhouettes, dark corridors, and sewers lit according to The Third Man (1949), the film goes more for impressive cinematography (Wolfgang Dickmann) than exploitation arousal. Beyond a dreamy 80s love scene (synthesised by Tangerine Dream, who provide the score) a brief group shower, and a couple of painterly sessions with Sofia's gang, Red Heat doesn't especially live up to its advertising. Fortunately the plot, and particularly Blair's central performance, more than make up for the shortfall of lurid delights that usually decorate the 'Women in Prison' genre. Come the finale, the stakes are high, you're invested in the outcome, and a palpable sense of tension (mixed with delicious vengeance) plays-out right up to the credits. 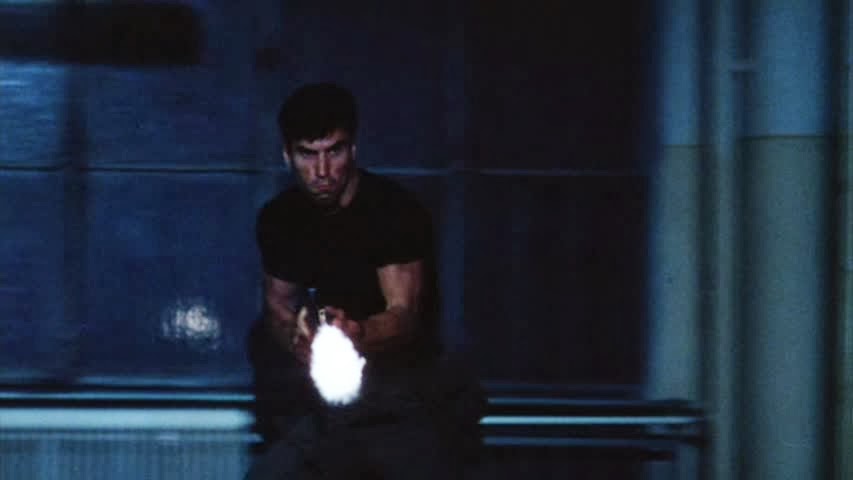 “If I do what you want, can I go home?” Don't expect a replay of Chained Heat by any means – Red Heat works far better as an impressively constructed B-Movie than an exploitationer, trading lurid thrills for emotional impact. 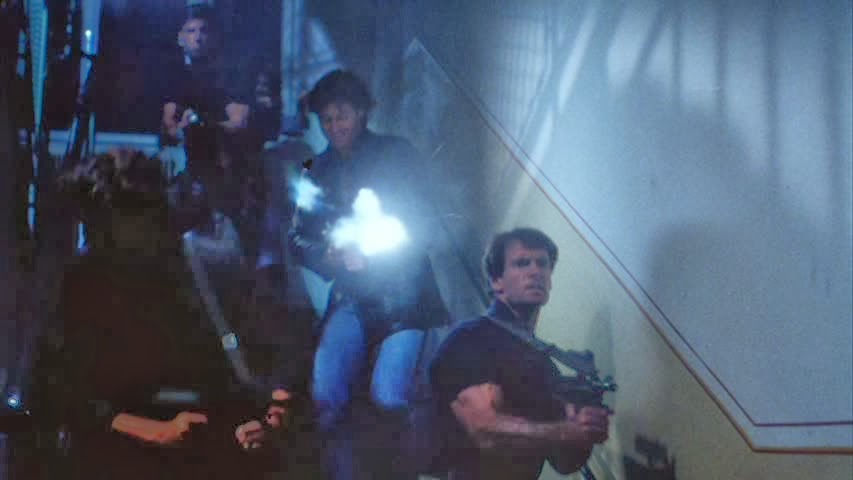 “You have no choice.” Panik House Entertainment's DVD features a nicely restored, occasionally grainy, widescreen print with good audio, but the film is cut: a rape scene is almost entirely excised. The slice is evident and leads to some initial confusion, although you get the point, even if it's trickier to understand the full impact upon Christine's crumbling psyche as a result. The only extra is a trailer. 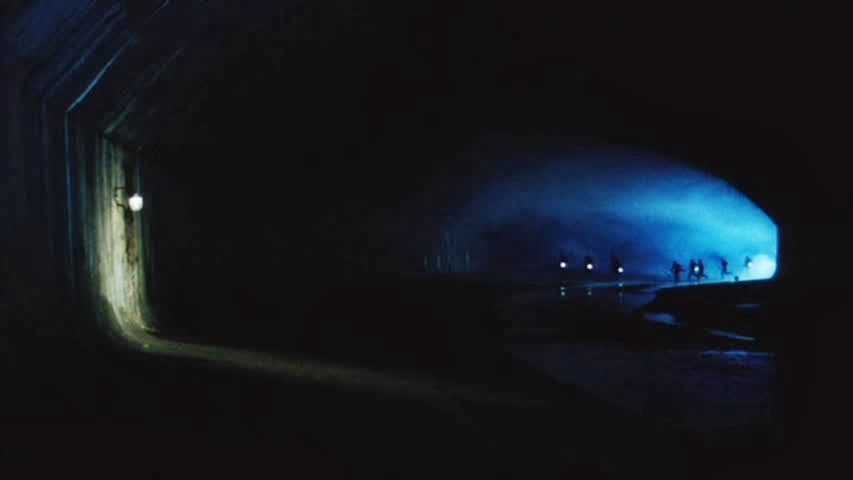 This film is reviewed as part of the Panik House Entertainment triple feature double disc DVD, accompanied by Chained Heat (1983) and Jungle Warriors (1984).
Posted by Nick Thomson at 11:36