The Case of the Scorpion's Tail (Sergio Martino, 1971) DVD Review 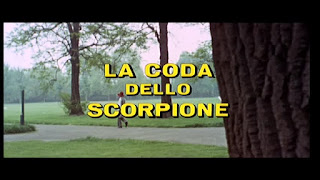 “You know I'm dying to see you.” Sergio Martino – one of Italy's finest journeymen filmmakers – helmed an impressive run of giallo films during the early 1970s. Following on from the sublime The Strange Vice of Mrs Wardh (1970) came The Case of the Scorpion's Tail, a densely-plotted thriller/morality play packed with infidelity and greed – as well as a some particularly flashy murder sequences... 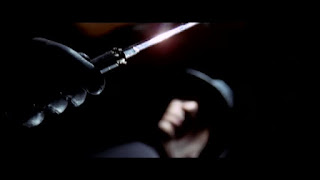 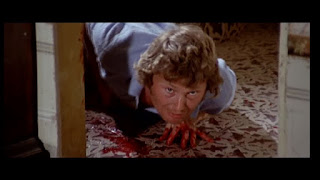 “You destroyed whatever love I had in me.” Opening on a woman's hat – in a striking shade of red – bobbing down the streets of London, fused with Eugenio (2019: After the Fall of New York) Alabiso's kinetic editing and Bruno (Eyeball) Nicolai's unforgettable score, Sergio Martino gradually pulls back to reveal Lisa Baumer (Ida Galli, credited as Evelyn Stewart). Dressed in a sharp-lined grey-and-white number that quietly screams restraint, and with her increasingly estranged husband Kurt off on yet another business trip, Lisa wastes no time and dives into bed with her latest lover. Then – at the height of their passionate tryst – Kurt's plane explodes! 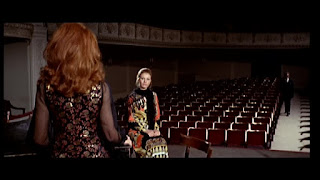 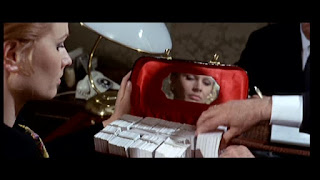 “I have a feeling it was destiny that brought me in here to meet you tonight.” Stunned to learn that she is the beneficiary of a million dollar life insurance policy – that can only be accessed in Athens – Lisa is low on grief and high on extortionists. Stalked and accosted by a junkie – also a former lover – he claims to have a letter that, in recent light, could suggest she's somehow wrapped up in a plot to spectacularly bump off her husband for the money. Perhaps her change of outfit to a searing crimson assortment signals her blossoming wickedness? 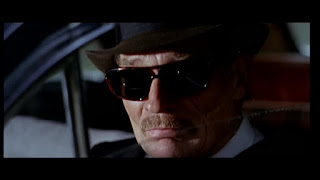 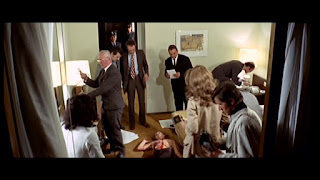 “A beautiful girl's body can change overnight, and a pretty face – what if those were gone?” Subjected to blackmail and menace, she seeks to extricate herself from this murky web – however, not only does she find the love letter missing, but her former lover and current blackmailer crawls from the darkness and collapses in a bloody heap. Naturally, loads-a-money makes you instantly popular, so it's not just Lisa's blue eyes and strawberry blonde locks that have caught the interest of a hierarchy of curious gentlemen. Head of the pack is Peter Lynch (George Hilton, All The Colours of The Dark), an investigator for the insurance company. 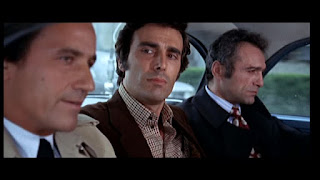 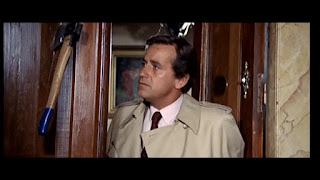 “I might have deceived my husband, but I didn't kill him.” Stumbling into an ever-twisting plot, Lisa finds herself swept up in another case of blackmail – this time from Kurt's mistress and supposed wife-to-be Lara (Janine Reynaud) and her scarred 'lawyer' Sharif. Cashing the insurance cheque and seeking to flee Athens, things go from bad to worse as a flick-knife killer in black suddenly attacks Lisa – and kills her! We're only a third of the way in, so who's the money-hungry butcher and who will survive their savagery? 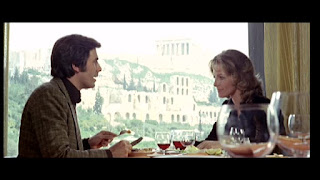 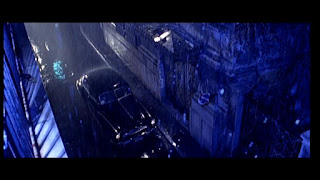 “She was being threatened; someone was after her.” While less of a shock these days, at the time such a move – slaying your apparent protagonist inside the first act – would have been a ballsy, out-of-the-blue surprise for audiences. Even more-so the blood-spurting moments of violence – including a grisly eye-gouging (might Lucio Fulci have gained his penchant for ocular trauma from Martino?) Coming out of the gate strong during the most vibrant period of the giallo movement, Martino and his writers – Ernesto Gastaldi (The Case of the Bloody Iris), Sauro Scavolini, and Eduardo M. Brochero – brought a sense of brash chaos to the exploding world of the Italian thriller. Indeed, their focus on evermore shocking murders would arguably inspire filmmaking icon Dario Argento to pursue increasingly dramatic, inventive – and arguably unparallelled – death sequences in subsequent silver screen outings. 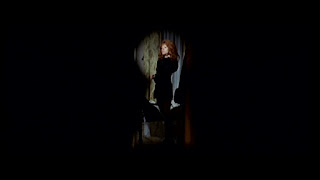 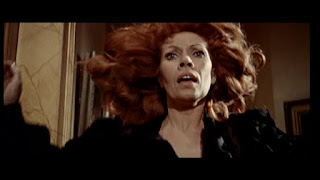 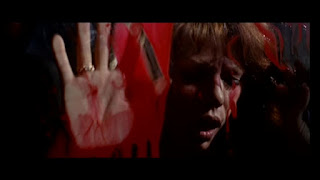 “For a murderer he certainly has a great face.” However, the film isn't all about lurid pursuits, indeed Cinematographer Emilio Foriscot (The Strange Vice of Mrs Wardh) uses the picturesque locations to his full advantage. From the iconic imagery of London – black cabs, Parliament, and all things red (buses, post boxes, phone booths) – to the ancient architecture of the film's main setting of Athens, The Case of the Scorpion's Tail proves to be a visually lush – not to mention bravura – piece of cinema. A police interrogation see-saws from an askew sideways angle, while one of the film's set pieces is bathed in a sickly emerald glow. The most impressive sequence of all, however, involves an exceptional assortment of visual flourishes: the classic wide angle POV of the killer, a glimpse through a keyhole, a door being slowly unlocked, a wide-eyed slow-motion run, an exploding window, and a blood-gushing climax! 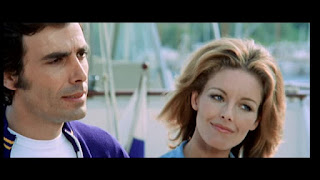 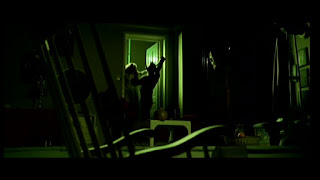 “Well, whoever it was, we know now he's thrown down the gauntlet of war.” The film also features a talented cast that includes Luigi Pistilli (Your Vice Is A Locked Room and Only I Have The Key) as Inspector Stavros (of course!), Alberto de Mendoza as John Stanley – Stavros' Interpol foil – and, stunning as always, Anita Strindberg (Who Saw Her Die?) as photographer Cléo Dupont. Her film career may have been brief, but the camera never failed to capture those captivating eyes and sharp features. Indeed, few – if any – could convey fear quite like her. 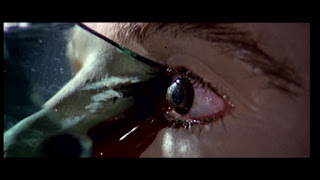 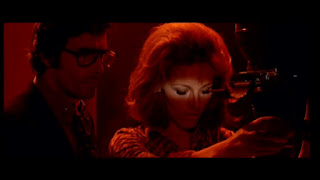 “Let's play together, we might both win.” A highlight film in the Italian thriller genre, Sergio Martino's film mixes sparky dialogue and characterisation (Inspector Stavros struggles to solve a simple jigsaw), with impressive shows of Grand Guignol gore and twitchy scenes of supreme stalk-n-slash. Martino displayed his immense talent with a fantastic run of gialli – The Strange Vice of Mrs Wardh (1970), The Case of the Scorpion's Tail (1971), All The Colours of The Dark (1972), Your Vice Is A Locked Room and Only I Have The Key (1972), and Torso aka Carnal Violence (1973) – and it is safe to say that they are all, without exception, some of the very finest examples of the giallo form. 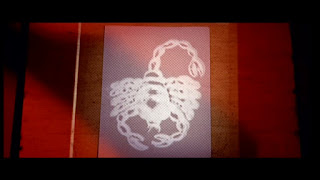 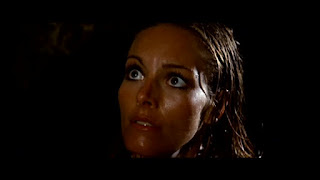 “Before I went anywhere, I was waiting – for a beautiful day and a beautiful girl.” This is a review of the 2005 NoShame DVD – one that has been long out-of-print, and one that I have personally been chasing for years. Featuring English and original Italian audio options, the film's visual presentation is solid, if not particularly remarkable – it is presented in it's original aspect ratio of 2.35:1, though. Extras wise there is a picture gallery, trailer, and a 24 minute collection of interviews with some of the key contributors to the film. Until a new release comes along, this is a rare find for gialli fans, but one that is an absolute must-have.
Posted by Nick Thomson at 11:58

Now there is a an Arrow Blue Ray...