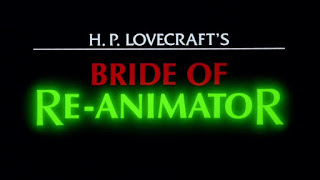 “This is no longer about just re-animating the dead – we will create new life.” Stuart Gordon's Re-Animator (1985) has, quite rightly, gone down in the annals of cinema as a landmark in horror. Brian Yuzna's 1989 sequel, however, has somewhat lurked uncomfortably in the shadows of its progenitor – but it deserves a re-evaluation, and with this in mind, Bride of Re-Animator reveals itself to be consumed with the idea of unrequited love as it circles the boundaries of necrophilia through the complex entanglement of not merely a love triangle, but a love pentagon... 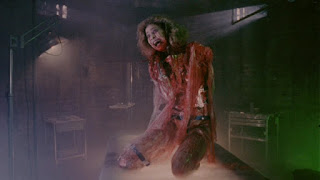 Click “READ MORE” below to continue the review and see more screenshots – PLEASE NOTE: PART OF THIS REVIEW CONTAINS SPOILERS (the segment is clearly marked)…

“They would never understand our methods.” Eight months after the tragic events of the massacre at the Miskatonic medical school, Doctors Dan Cain (Bruce Abbott) and Herbert West (Jeffrey Combs, The Frighteners) have found themselves amidst the chaos of a Peruvian civil war. Between their medical duties, and with a constant supply of freshly dead meat, they continue their clandestine research – but then the rebels break through and they barely escape with with their lives. Safely back on familiar turf at Miskatonic, West feverishly continues his work with a new goal in mind – to create an entirely new living entity built from specially selected parts of the deceased – and pulls the reluctant Cain along with him. 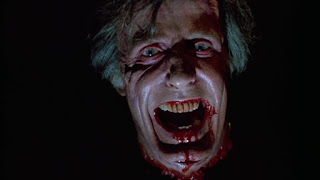 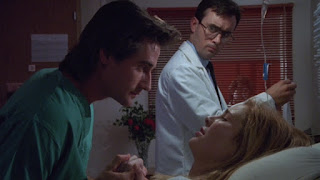 “Don't let the little head rule the big head, Dan.” As West plays God with bizarre creations, such as a grim-but-oddly-cute pet (of sorts) consisting of severed fingers and an inquisitive eyeball, Cain is wrapped up in his more honourable work. Grieving the loss of his girlfriend Meg, he finds help in the form of Gloria (Kathleen Kinmont, Halloween 4) – or the Meg who lived, as Dan considers her – a terminally ill patient whose secret desire for him burns within her failing body. However, with the arrival of Francesca (Fabiana Udenio, Austin Powers), a beautiful young woman he met on the front line, Dan starts to yearn of breaking free from West's dangerous circle. Easier said than done, because West – in a move out of the darkest chapter of the manipulative relationships handbook – lures Dan deeper into his madness by giving him Meg's heart (literally) with the promise of breathing new life into it. 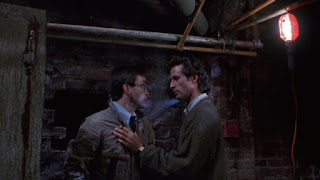 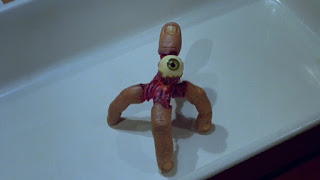 “Who'd want to steal body parts?” Meanwhile, the decapitated head of the previous film's villain Dr Hill (David Gale) returns with vengeance in mind, having endured a stint as a sideshow attraction, and Lieutenant Chapham (Claude Earl Jones) inserts himself into the strange goings-on to investigate corpses both missing and inexplicably walking around in the psychiatric ward. How far will Dr West go to achieve his goals and will Dr Cain ever be able to extricate himself and Francesca from the spiralling insanity? 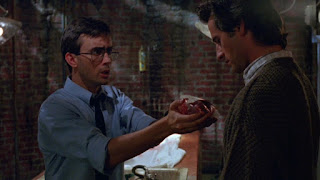 “I don't want to gamble with Meg's heart.” The booklet that accompanies this release features an essay written by Michael Blyth, who proffers that the film contains a running theme of homo-eroticism – albeit a chaste one – and there is certainly abundant evidence to make that reading. More than once during the film Dr West seduces Dr Cain into staying with him to further pursue their work by demonstrating the possibilities of their experiments. Furthermore, the pair make for a bickering odd couple with a secret to hide (although said secret is the fact they're stealing bodies from the medical school), with Cain eager to 'go public' with their findings while West is paranoid and possessive. However, Dr West also poses as an almost asexual figure – certainly one of a confused sexual status, at least – capable of being both ignorant to the subtleties of the human heart as well as expressing a tender care towards Dan, his only confidant, when he most needs it. Ultimately, though, Dr West's pursuit of science outweighs all, and at times it seems as if – because West cannot experience love – that he believes that neither should anyone else. 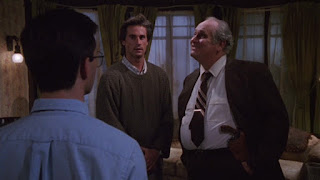 This is where the aforementioned 'love pentagon' enters. In addition to the Cain/West relationship, the Cain/Francesca/Gloria/Meg entanglement sends 'love lines' flying all over the place. Indeed, left to his own devices, Dan Cain explores the scale of necrophilia. His former girlfriend Meg is dead and gone, while Francesca is the opposite side of the coin – very much alive and well and the chance for new love. Stuck in the middle, though, is Gloria, who runs the gamut from dying to dead to re-animated. 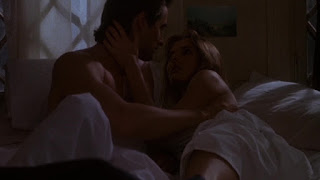 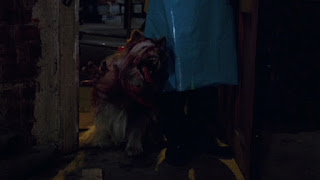 “Others dare not dream of what we're about to do.” Amidst all this, Dr West displays passive aggression and outright jealousy. At one point he quite literally comes between Dan and his adoring patient Gloria before poisonously suggesting that she could be of use to them. Then later on, while Dan and Francesca make love, West lurks in the shadows – hurt and humiliated – and retreats to one of his grotesque experiments: fusing a man's arm to a woman's leg. Pleased with himself, he becomes quite frisky and plays footsie with the hideous creation until it, too, rejects him – kicking him in the face. As if to spite Dan, while further tempting him, West goes so far as to directly quote and mimic him from this scene later on in the film just before they breathe life into their Bride. This through-line of rejection returns during the climax, and feeds into the overall theme of the film: unrequited love. 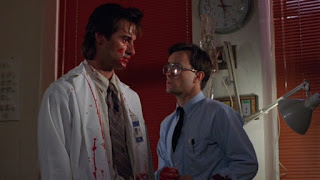 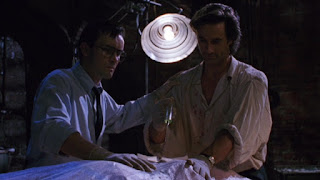 “You're so beautiful; your skin's so soft, so warm.” Consider the case of the titular Bride: a dying woman with an attraction to her Doctor (Cain, who cares for her deeply while also grieving the loss of his love from the previous film), who succumbs to her illness only to be painstakingly resurrected by Cain and West. However, when she is finally brought back to life (a second chance at love?) – as a Frankenstein's monster of cobbled together body parts – she comes to see the fear on Cain's face. Interestingly, this is an inversion of the scene in The Bride of Frankenstein (James Whale, 1935), in which the Bride rejects the original Monster. Here, in The Bride of Re-Animator, she realises the torment of not only being trapped within a hideous creation, but once again suffers the rejection of her love. The reality of her as she is now (rendered in a form to which she did not consent) cannot possibly match the idea of her as the Meg who lived. In the tragic final act – after West tries and fails to claim dominion over their creation – Gloria rejects West (much like The Bride rejected The Monster), and falls into a tug of war over Dan's heart with the live and unmarked Francesca. When it all comes crumbling down, she literally tears her (or rather Meg's) heart out and holds it in front of Cain's face (inverting an earlier scene) and screams “Is this what you want?!” The twisted dream has been shattered.

In the final moments, as Dan and Francesca crawl from the earth and hold each other, Meg's heart – the symbol for all this love and madness – beats its last beside the tragic and dismantled visage of Gloria. Could unrequited love be any more mournful than this? Another woman's heart inside a patchwork body not of your own, your love intersecting with that of another, neither of which are destined to be fulfilled. 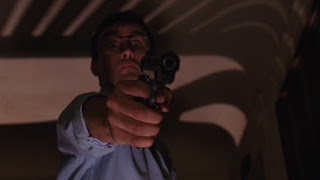 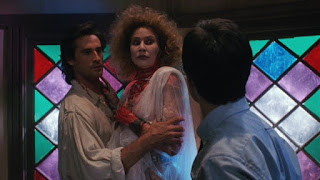 “This is your madness – it has nothing to do with me.” The antithesis to all of this unrequited love, however, is represented in the scruffy, bulbous form of Lieutenant Chapham, ultimately revealed to be a wife beater who is tortured by the resurrection of the wife he had accidentally killed in a fit of rage. Far from love, Chapham is misogyny incarnate (see his undead pawing of Francesca, and his lecherous dialogue with her), and disturbingly he shares a sense of jealousy not too dissimilar from Dr West. With so many intersecting pathways, does this love pentagon actually require more sides? 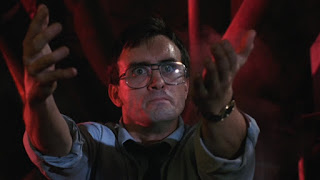 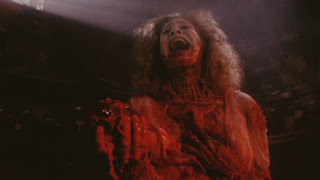 “Just dead tissue, but in our hands it's the clay of life.” Arrow Video's 2016 two-disc Blu-Ray/DVD has, naturally, proved to be a huge step-up from my previous copy of the film (which was in a rather murky print on a DVD from 2002). As well as being the fully uncut version presented in a brand new restoration, the package boasts three jovial audio commentaries, interviews with Director Brian Yuzna and a host of the film's various special effects creators (Robert Kurtzman and Screaming Mad George among them), as well as archive material including deleted scenes (expanded upon in further behind the scenes clips), and an on-set video featurette giving us a glimpse of several key effects sequences during the production. Audio and video quality is excellent, with only a slight shift in colour and definition for some of the unrated shots (which were sourced from a different print). This two-disc edition is a slightly streamlined version of the three-disc limited edition, which had included deluxe packaging, a prequel comic book, and the R-Rated version of the film (there might be some copies still floating around out there for the particularly keen collectors) – but beyond that everything else is the same. 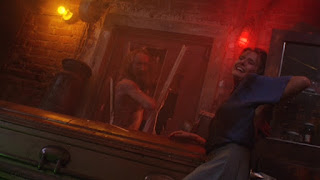 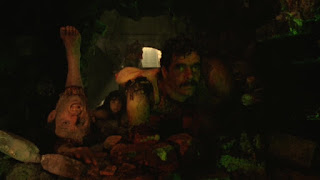 “This morbid doodling with human body parts – is this what it's all about, is this what all our great work has led to?!” Even though Yuzna's sequel – written by Woody Keith and Rick Fry (and adapted from the writing of H.P. Lovecraft) – doesn't reach the same heights as the original film, it still feels close to Gordon's seminal body horror masterpiece in both style and tone. Crammed to the gills with extensive and stunningly-realised special make-up effects (several studios were employed, including a fledgling KNB) and a luxurious spread of committed performances, Bride of Re-Animator is, upon reflection, quite possibly Brian Yuzna's best work. Despite the rushed development period that the script endured – new pages coming in thick and fast even during production – the film is nonetheless adorned with delicious details: Herbert West's malleable moral compass is reflected in his ever-shifting sense of ownership and responsibility (“I created/We created”). Furthermore, the film's dark sense of humour skilfully balances the blood, guts, and tragedy – where else would you find a dog waving it's newly attached human hand at it's owner by way of a hello? Obsessed with the vagaries of unrequited love, Bride of Re-Animator tours the subject through unresolved grief, guilt, and the boundaries of life and death itself. It truly is a war of the (severed) head over the (disembodied) heart.

N.B. Screenshots are taken from the DVD copy of the film (I don't have a Blu-Ray drive from which to capture images).
Posted by Nick Thomson at 17:54