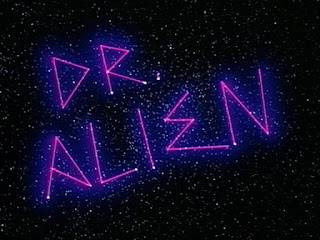 “One minute I'm standing there and the next thing I know they're all over me like mud on a pig.” Following on from Creepozoids, Sorority Babes In The Slimeball Bowl-o-rama, and Nightmare Sisters, David DeCoteau rounded out the 1980s with this teen boy fantasy/comedy that was also known as 'I Was A Teenage Sex Mutant'. Zany from the get-go, it features deliberately on-the-nose humour, many-an-exposed-set-of-norks, substitute professors in lingerie, and an alien proboscis that sprouts from a college nerd's head to act as a powerful aphrodisiac! 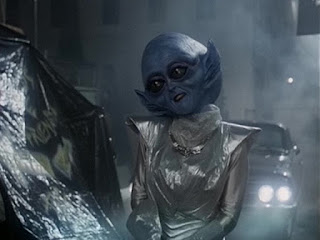 “People say I'm dull and boring … maybe they're right.” Wesley (Billy Jayne, as Jacoby) is a full-on college dweeb: soft-voiced, weak-bodied, sartorially inept, and terminally useless when it comes to the ladies – especially his major crush Leeanne (Olivia Barash, Repo Man). When his biology professor is hospitalised after his car is run off the road by a glowing orb soaring through the night, Wesley's world turns upside down as in-steps the substitute: Ms Xenobia (Judy Landers). She's a blonde bombshell and promptly has all the male tongues wagging, but when Wesley volunteers for an experiment things take a turn for the weird … and kinda sexy. 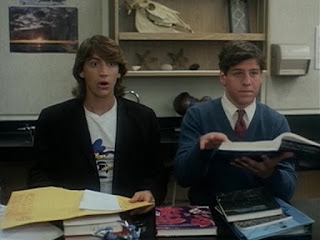 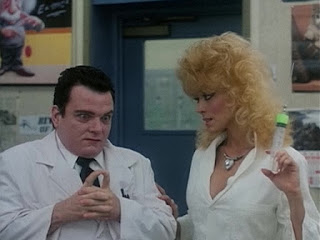 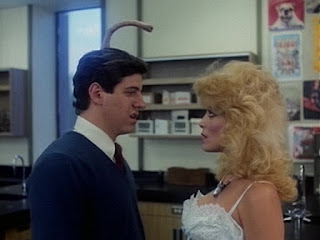 “Amit it, you're dying to slip her the beef!” Injected with a syringe full of Re-Animator-style glowing green goo, a strange antennae grows out of Wesley's head and sends Xenobia into a horned-up fit of passion while her geeky assistant Drax (Raymond O'Connor, L.A. Noire, 'Park Ranger Bob' in The Rock) notes down the results. Much like Peter Parker turning into Spider-Man (but without the crime fighting and with oodles of teenage rebellion and mucky dreams) Wesley becomes a confident and cool stud about town overnight. Talk about a fantasy, right? The nerd transforming into the smartly-dressed, smooth-talking, bully-beating, girl magnet! 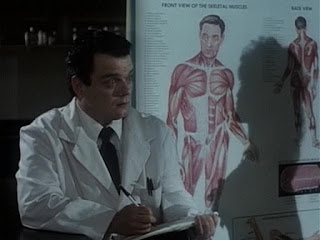 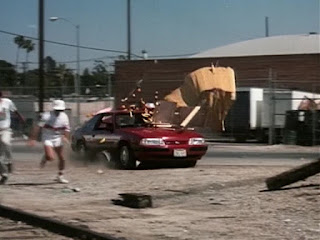 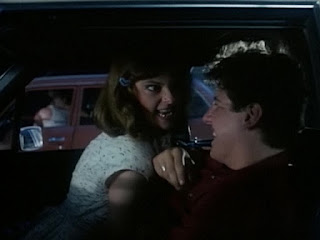 “Now please, be a good human and come with me quietly.” However, with rampant sexual magnetism come great opportunities to be ravished. Wesley's only got true eyes for Leeanne, but that horny protrusion of his keeps getting him into trouble. He barely makes it out of the girl's locker room alive when a horde of Coeds – Michelle Bauer in a cameo role among them – pounce on him, much to the astonishment of Wesley's best bud Marvin (Stuart Fratkin, Teen Wolf Too). Will he be able to escape this lustful cycle of madness, or will he end up as a desiccated husk? 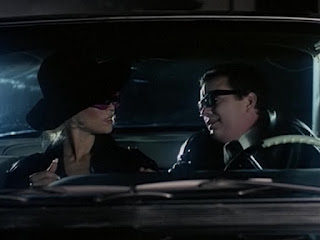 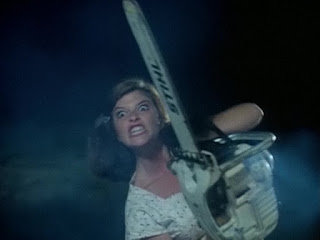 “No swollen-headed, puffy-eyed, blue-skinned being from a different galaxy was gonna screw up my sex life.” Tailor made for the heights of the video rental era, and with a firm lock on its target audience, Dr Alien mixes relate-able coming-of-age woes with goofball gags (replete with oopsy daisy musical cues) and the odd bout of proton canon fire. Shot over nineteen days – relatively luxurious compared to DeCoteau's previous flicks – there's no real hiding the budgetary limitations as car stunts take place on quiet industrial zone back roads and a punk rock gig threatens to consume the third act. But, to be fair, all involved give it their best to fight their constraints. Curiously, though, the film plays it a bit coy at times, which gives the impression that DeCoteau and his writer Kenneth J. Hall didn't always know quite how far to go with this one. While much of Xenobia's first romp with Wesley plays out in silhouette, just a few minutes later the viewer is dunked into one of his raunchy dreams with the camera's gaze cheerfully leering over three nubile bodies. It's decidedly too much for a PG-13, but it feels as if – unofficially – that's exactly the audience that the filmmakers were playing to. 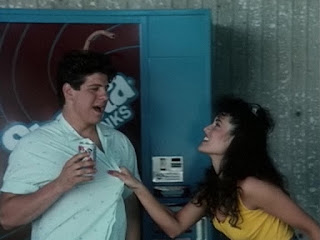 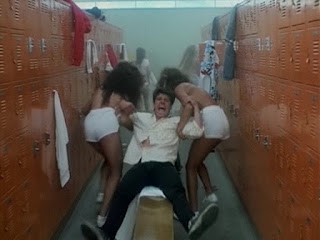 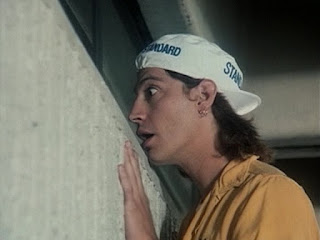 “Save it. Let's get to biology class!” While the film's sense of humour charms with its self-aware, subtlety-free manner, the script does tend to rely on far too much voice over to tell the story. Similarly, there's a lack of propulsion during the second act as Wesley clumsily seeks to woo Leeanne while simultaneously struggling to control his new-found urges. However, the movie does tend to surprise you with fits and starts of energy, be they a bunk-up in the janitor's closet or a nightclub descending into a sudden flurry of shooting lasers and people dive bombing over balconies. By comparison, Creepozoids had more focused plotting (but a micro scale), while Sorority Babes In The Slimeball Bowl-o-rama was a solid all-rounder. As for Dr Alien, quality wise it nestles somewhere between the two aforementioned movies. It's patchy feel somewhat lets it down, but even still it's filled with game performances and is an enjoyable bit of cockamamie fun. 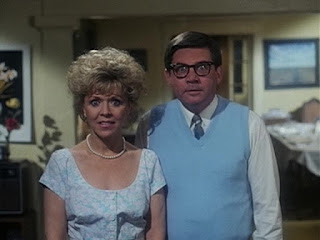 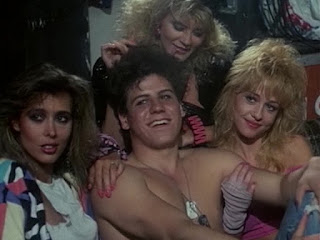 “That night my mind was filled with many exciting visions.” 88 Films' region free DVD (released in the UK in 2013) has a 4:3 video presentation with Digital 2.0 audio. Picture quality is okay, quite soft and fuzzy, but serviceable for a cheesy flick. Supplemental Features consist of a stills gallery, original trailer, 'Full Moon Trailer Park', reversible sleeve art, and the real reason this disc is rated 18 by the BBFC: the bonus film “Auditions” (1978). Conceived by Charles Band, it's basically a succession of strip teases and softcore fumblings interspersed with ropey vaudeville acts. The conceit is that this is a collection of audition reels for would-be actors with a few loons and foils meandering in and out according to a very vague plot. It seems to be sourced from a tape of an unrestored print, which lends to its low-down and sleazy vibe. Fun fact: it features an early appearance by genre icon Linnea Quigley. 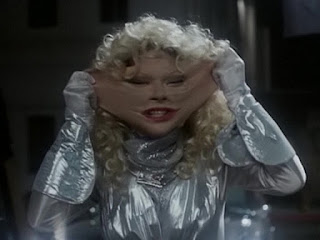 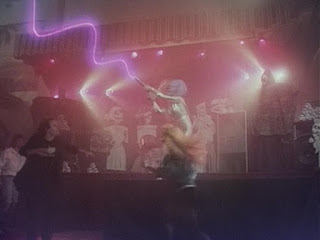 “Again with the neck tie; people are gonna think you're my lawyer or something – don't you know this is the 80s?” Fun fact number two: Stuart Fratkin (who plays Marvin) might be a familiar face to keen-eyed fans of destined-to-air-forever sitcom Friends. In episode 8 of Season 1, The One Where Nana Dies Twice, he plays Chandler's work pal Lowell – the guy who says that even if Chandler was gay, Brian would be way out of his league. You know what's kind of weird? Once I'd finished Dr Alien, I switched over to Comedy Central and that very episode of Friends was airing. Fun fact number three: the film also features cameo roles from Ginger Lynn (credited as Allen) as a 'Rocker Chick', and Elizabeth Kaitan (Slave Girls From Beyond Infinity, Friday The 13th Part 7) as a waitress. A sequel was planned, but it never happened. It would have been interesting to see how this oddball story might have continued.
Posted by Nick Thomson at 17:39