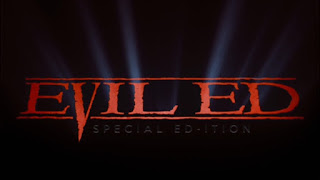 “I'm just another chunk of meat lost in brain land.” Striking out of Sweden as the blood-soaked antithesis of Ingmar Bergman, Anders Jacobsson's Evil Ed – reportedly made with a budget equivalent to a mere two-and-a-half seconds worth of Jurassic Park – is a frantic and gleefully over-the-top horror comedy crammed to the gills with references to American splatter epics. In some ways it is the ultimate fan film crafted by obsessives of blood 'n' guts cinema, and yet – first appearing in the UK in the dying years of James Ferman's censorious grip on the British Board of Film Classification – when horror was still tantamount to smut – Evil Ed comes as a rebel yell against the Mary Whitehouse types of the world. Hands off our gore, it screams, take your scissors and shove 'em where the sun doesn't shine! 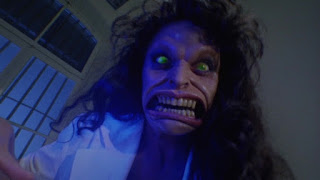 “In this film there's a scene where a woman gets raped by a beaver and then shot in the head with a bazooka.” Ed (Johan Rudebeck) is the mild-mannered poster boy for Milquetoast males, a soft-spoken film editor merrily splicing together relationship dramas as dreary as the water in a clogged kitchen sink. However, when a fellow editor loses his mind (and then his head, rather explosively!), Ed is drafted in to the 'splatter and gore department' to perform tasteful cuts to the hugely popular 'Loose Limbs' series of films in preparation for their release in more nervous climates. Dispatched to a remote house, Ed is dunked head first into a world of extraordinarily graphic violence and salacious sex – the 'Loose Limbs' films are, so it appears, exactly what Mary Whitehouse and her coven of crucifix-clutching cardigan enthusiasts assumed all the so-called 'video nasties' were. 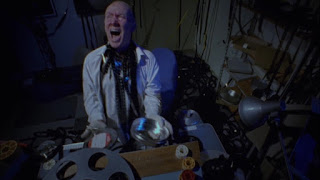 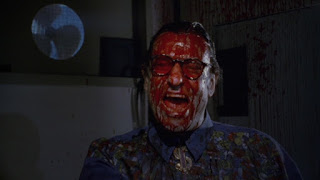 “90 minutes of condensed sex and violence – do you call that a great movie? Do you have the slightest idea what the moral and ethical principal is?!” Indeed, just as the nervous nellies of the 'censorship utopia' vociferously predicted, the scissor-happy Ed finds himself becoming affected by the onslaught of graphic content after weeks of making his completely nonsensical edits. Gutting every money shot from the low-down sleazefests – with the blood splashing before his eyes and the screams attacking his ear drums – poor old pale-faced Ed begins to experience grotesque hallucinations that seek to drive him over the edge into murderous insanity. From busty bimbos to monstrous ghouls and goblins, Ed is besieged from all directions until his delusions become all-consuming. He encounters a harbinger of dark times ahead and the challenge is laid down – the world needs correcting and only Ed can end the sickness by any means necessary. 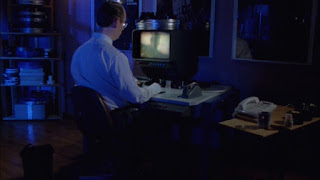 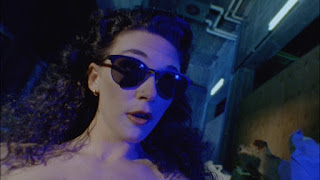 “Read my lips – not X-rated!” At a time when 'horror' was still being seen by the mainstream as a skeleton in the cupboard to be ashamed of at best (and flat-out sadist at worst) – when films like Silence of the Lambs and Scream were marketed as 'thrillers' – Evil Ed lurched out of the gloom to feed the imagination of young film nerds like myself and helped keep the genre alive. The 1990s weren't a golden era for horror, but the James Ferman era of the British Board of Film Classification was drawing to a close, and Jacobsson's film was a timely reminder of how daft the moral panic over 'video nasties' was. Showing that some people just aren't cut out for horror, Ed – from the world of character-driven foreign language melodramas – is corrupted exactly how the moral crusaders claimed. Meanwhile, Nick (Per Lofberg) is obsessed with the 'Loose Limbs' franchise, but he's not the one going around killing people. Instead, it is the scissor-happy censor who beats him to a bloody pulp and it's the slick, pony-tailed, Europop sleazeball boss Sam Campbell (Olof Rhodin) whose hands roam wherever they please. Nick is just a normal teen with a limited range of cinematic interests, but like 99% of horror fans he has no ill intentions and knows exactly where the line is drawn between fiction and reality, right and wrong – and he further enjoys his horror movies as a social act. 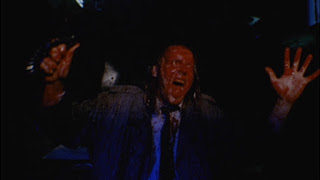 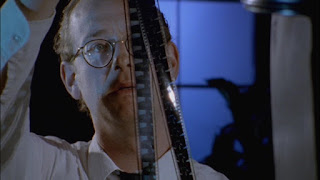 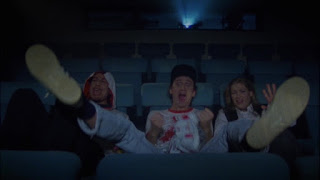 Just because you enjoy watching gory films, doesn't mean you'll act them out. Numerous academic studies, and the simple fact that society at large isn't out there slaughtering each other in a frenzy after watching a horror flick, have long since proved the case against the Godheads who masterminded the asinine panics over media they didn't personally like. Cannibal Holocaust wasn't a snuff movie, N.W.A. simply found their voice and freedom of expression, and Grand Theft Auto is literally a game. Despite tackling the subject head-on, Evil Ed – written by Jacobsson, Goran Lundstrom, and Christer Ohlsson – never seeks to joylessly stand on a soap box because it's having far too much fun prodding the po-faced complainers through Ed's comically over-the-top descent into corruption. With his mind warped, he cuts together all the grisliest parts of the 'Loose Limbs' series into one long cavalcade of pandemonium, surely referencing how Mary Whitehouse and chums did exactly that – screening a montage of the video nasties' greatest hits to flabbergasted members of Parliament – while seizing on paper-selling tabloid ardour for the fulfilment of their own perverse power fantasy. Now, tell me, who exactly is the sicko in all this? 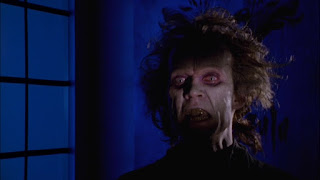 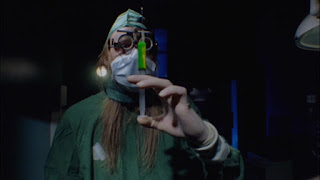 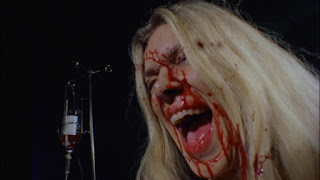 “It's your world – I just live in it.” Strewn with references to highlights of 80s horror, but never to its detriment, Evil Ed revels in its influences. Considering that Ed's boss goes by the name of Sam Campbell, Jacobsson's & Co's main source of inspiration is obviously the early works of Sam Raimi. From the Spider-Man director's signature camera moves to Bruce Campbell's catchphrase of “groovy!”, the energy and bravura sense of style of Evil Dead II is borrowed from liberally – but credit is always given. Numerous walls throughout the film are adorned with posters for The Thing, Prince of Darkness, The Fly, Critters, Evil Dead II and many more, and that's not where the references stop. A 'spot the reference' drinking game would surely render any self-respecting horror fan absolutely paralytic by the half-way point as Re-Animator, The Shining, Gremlins, Halloween, Night of the Living Dead, and even Full Metal Jacket are just some of the films that get a cheeky wink sent their way. One cameo appearance sure to get genre fans' skin tingling, though, is 'Chop Top' himself Bill Moseley as the voice of 'Dr Wrench', the drooling misogynist maniac at the heart of the 'Loose Limbs' franchise. Indeed, so over-the-top is the character, that he cheekily represents every dismissive, hand-wringing condemnation from the self-righteous enemies of free speech and horror cinema. 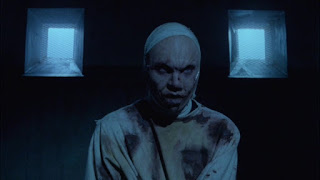 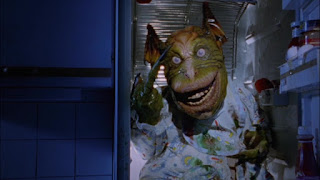 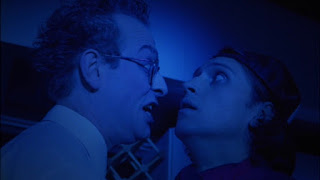 “Don't you fucking look at me!” Boasting a fantastic array of practical effects engineered and crafted by numerous artists – chief among them Goran Lundstrom, Anders Bratas, and Hannes Rhodin – Evil Ed is a feast for horror hounds as severed body parts soar through the air and creepy characters such as 'Fridge Fritz' and 'Demonic Doc' lunge at the audience with a babbling intensity. Put simply, the film is a phantasmagoria of deliciously dark delights from start to finish – a 'plastic reality' spectacle in the truest sense. These monstrous creations – and the film as a whole – demonstrate the passion and creativity that went into making the movie, a venture which took the film-makers three years to complete. Utterly independent in spirit (and production) through-and-through - and delivered by a dedicated, fun-loving cast and crew - Evil Ed kicked against the stuffy gatekeepers of the Swedish film industry of the time and achieved cult status in more than sixty countries. More than two decades on it's still an achievement that deserves celebration. 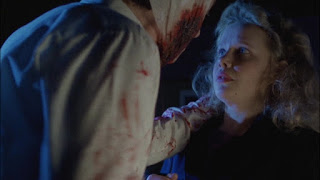 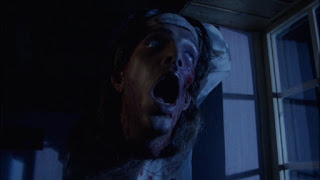 “Just because you're paranoid, doesn't mean I'm not here to get you.” Playing with tropes of Americana (see the cigar chomping SWAT leader and the Leone-esque showdown), and cannily performed and dubbed in English, Jacobsson's film takes on a strange, disembodied nature at times. And yet, even with its tongue thrust straight through its distended cheek, the film still manages to create genuine unease as Ed's vulgarity towards his wife Barbara (Cecilia Ljung) comes forth as surprisingly disturbing. Amidst the extras on the disc there is a selection of deleted scenes, which shed some new light on Ed's relationship with his wife and child, revealing a controlling and censorious attitude to parenting. In these deleted scenes, Ed and his wife are exposed as – at worst – miserable meddlers in their daughter's restrictive life, the real bad influences as they seek to deny any meagre amount of self-indulgence or fun. Indeed, as a result, the bitter back-and-forth between a loopy-headed Ed and his po-faced wife make all the more sense. One extreme begets another. 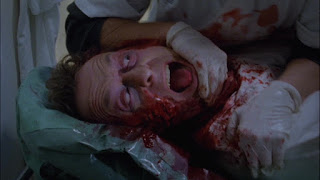 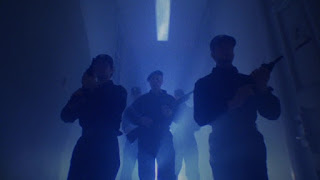 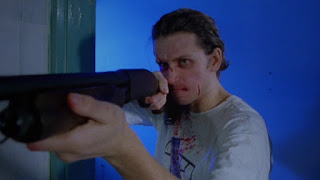 “Nothing's wrong with me – I've never been more right!” Arrow Video's 2017 three-disc 'Special Ed-ition' Blu-Ray/DVD presentation – given the amount of love and attention that we've come to expect from Arrow's work – is a hefty treat for fans of Jacobsson's delirious splatter flick. The set features two cuts of the film – the original and the extended version (which features two additional scenes re-inserted into the film) – and a wealth of special features. Amongst the extras are informative featurettes on the reconstruction and restoration of the film, a look at the filmmakers' work before and after Evil Ed, and two versions of a making of documentary filled with warm and candid interviews plus extensive behind the scenes footage (one running about 45 minutes, the other clocking in at over three hours!). And in case all that isn't enough to sate your appetite there's a few other bits and pieces included, making it the perfect package for existing fans of the film, but also for newcomers with an interest in the tongue-in-shredded-cheek horrors of the late 80s and early 90s. If you enjoyed Re-Animator, Bride of Re-Animator, The Evil Dead franchise, or Peter Jackson's early films (particularly Bad Taste and Braindead), then Evil Ed is highly recommended viewing.

N.B. Screenshots are taken from the standard definition DVD copy of the film.
Posted by Nick Thomson at 17:12