“The Corpse That Didn't Want To Die!” Following on from The Night Evelyn Came Out Of The Grave (1971), writer/director Emilio P. Miraglia once again dived into the glamorous pool of the lurid European murder mystery with The Red Queen Kills Seven Times (otherwise known as The Lady In Red Kills Seven Times), a violent clash of morals set against a fractured backdrop where two worlds collide: that of a Gothic castle and that of a modernist fashion house. This is a film consumed with ideas of wealth and the inevitability of hereditary sin... 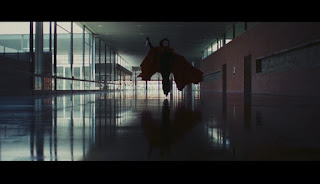 “I suppose it was a heart attack, but it looked as though he were terrified of something.” Tobias Wildenbruck (Rudolf Schundler, Suspiria) is the patriarch of an aristocratic family haunted by the tragic curse that looms over their clan like the Grim Reaper. Long ago there were two sisters – The Red Queen and The Black Queen – and it was the latter who, after years of being tormented by her sister, plotted revenge and murdered the Red Queen by stabbing her seven times. A year later seven people were slain in mysterious circumstances, and then another seven met grisly ends an entire century later. The pattern of the curse was established and now another century of waiting is almost over! Sure enough, one dark night, a psychotic figure draped in a red cloak strikes and Tobias' heart gives out. Much as he had feared, the curse has returned right on cue. 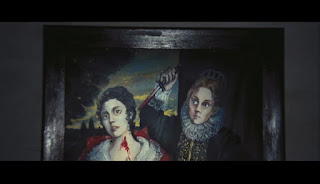 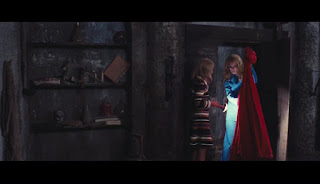 “It's dog eat dog, sweetheart, so wish me luck.” Kitty (Barbara Bouchet, Amuck!), one of Tobias' granddaughters, is a fashion photographer in the glamorous world of the nouveaux riche, while her sister Franziska (Marina Malfatti, All The Colours of the Dark) has been suckling at the family teat for years with her feeble husband Herbert (Nino Korda) within the heavy stone walls of Castle Wildenbruck. But how exactly did Tobias die? Herbert claims he saw Evelyn – Kitty and Franziska's other sister – fleeing the scene, but it simply cannot be, for Kitty and Franziska have a terrible secret. While everyone else believes Evelyn emigrated to America, she is in fact dead and rotting in the dank, rat-infested cellar of the Castle. Kitty and Evelyn, much like the Red Queen and the Black Queen before them, had spent their entire lives at each others' throats until a year ago – when Kitty accidentally killed Evelyn. Has Evelyn really come back from the grave to seek vengeance? Quite possibly, as soon the bodies begin to pile up. 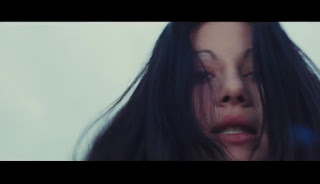 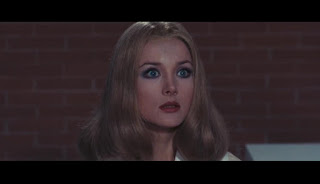 “You can't sell them the 70s with the ideas from the 60s.” Gialli often sought to comment on socio-political issues that were prevalent at the time, and Miraglia's 1972 offering certainly has some interesting ideas that it plays with. Amidst the high style and complex story, the film illustrates the distinct friction of the old and the new. Here, as witnessed via Kitty's harrowing descent into a real-life nightmare, no matter how far you escape into sleek and modern surroundings, your nature will catch up to you eventually. Sin – particularly greed, lust, and envy – runs rampant here and is reflected in the literal family curse of the Wildenbrucks (Kitty, Franziska, and Evelyn's parents are curiously absent, too). 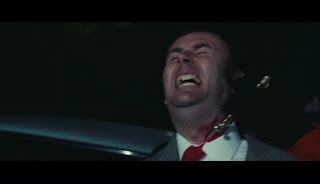 In one scene, Kitty – wrought with fear over the deadly events trailing in her wake – is given an expensive watch by Martin (Kitty's lover, played by Ugo Pagliai), but it merely provides a moment's respite from the towering sense of guilt that is threatening to tear Kitty asunder. Indeed, wealth – specifically that of the aristocracy – is seen as part of an inherited doom, one that perseveres through the centuries with a sense of inevitability. Miraglia's film speaks of old world European royalty and the well-to-do, as if the ghosts of the French Revolution hover nearby, and it is here that the small pockets of old money families are shown to be consuming themselves in private through hereditary mental illness (gene paddling pools?) and that classic deadly sin of greed. For another example of a screwed up aristocratic family in an Italian genre picture, check out the sexploitation flick Satan's Baby Doll (Mario Bianchi, 1982), and for more gothic giallo goings-on then you might want to give Seven Deaths In The Cat's Eye (Antonio Margheriti, 1973) a spin. 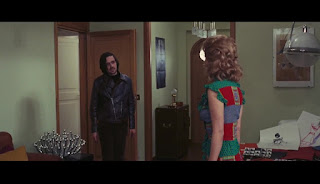 “All men are filthy beasts, don't come near me.” Naturally, being a giallo film, some of the beautiful women grow weary of high necklines and brassieres (see Franziska's revealing night gown) – or just clothing in general – but  there are some interesting sexual politics at work in the film. For instance, while Martin initially resists the temptations of the scheming and sexually forthright Lulu (Sybil Danning, Chained Heat), his veneer of morality rapidly crumbles at the sight of her unclothed body. Estranged from his wife (who is locked up in a mental asylum) and already having an affair with Kitty, his protest is paper-thin as he hops in the sack with yet another woman – and it's even suggested that he enjoys another tryst with another woman immediately afterwards! In Miraglia's film the male is depicted as an inveterate hip-thruster who is easily manipulated by promiscuity. Sin, once again, is too good to refuse. 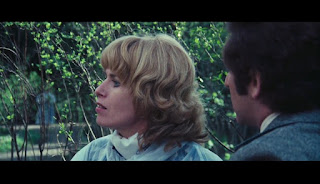 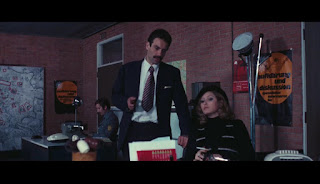 Furthermore, consider the case of Peter (Fabrizio Moresco) – another male, this time quite a despicable example – who cannot resist his lust and attacks the woman who he's blackmailing. However, as it transpires he is entirely controlled by another member of the film's female cast, more than one of whom displays sheer ruthlessness in the pursuit of their personal goals. The men are creatures while the women are Devils. One could debate this as reactionary in the wake of women's liberation, but considering the less-than-capable men in the film (one of whom is quite literally impotent – and is subsequently slaughtered in a park known for its working girls), it just goes to show that women are as capable as men of grotesquely abusing their power. 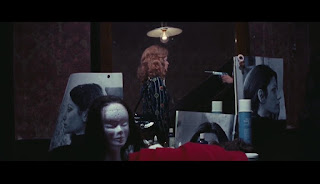 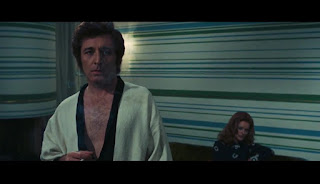 “I feel as if I'm living in the shadow of some terrible threat. All I know is it means to destroy us and I haven't got the strength to fight back.” But what about the good old fashioned nature of the mystery? True to form the script (co-written by Fabio Pittorru) slowly unravels into an increasingly convoluted series of twists, turns, and back stories revealed late in the game. Some of the murder set pieces are quite effective, and there are brief moments of blood gushing like geysers from punctured flesh. A run-in with some steel railings is particularly graphic, while just the sound of a skull being cracked open on stone steps elicits chills. The climax takes some unpicking to fully understand what's going on, even with a granite slab of exposition dropped into the finale, but the bravura nature of Miraglia's direction sweeps aside unanswered questions. Come the ticking clock of the climax, within the darkened grounds and cold bowels of Castle Wildenbruck, an explosion of squalid revelations and violent betrayal makes for a satisfying conclusion. 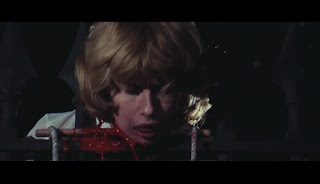 “You can keep Kitty for appearances and have me for entertainment, and if you keep me happy, darling, I won't blow the whistle on you.” Miraglia's film, produced during the exceedingly productive heyday of the giallo movement, seeps out of the ether and proves itself to be one of the finest examples of the genre. Amidst all the bloody violence, bared flesh, and J&B Whiskey bottles (were they the official sponsors of gialli back in the day?!) there is a stylish thriller – beautifully scored by Bruno Nicolai (The Case of the Scorpion's Tail) – hard at work on multiple levels and as such it merits your attention. 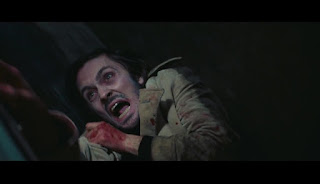 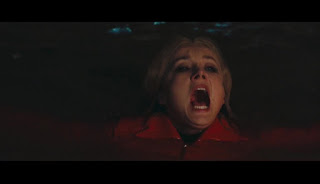 “You killed me and I've come back to avenge myself.” Arrow Video's 2017 Blu-Ray – a stand alone release after the deluxe box set that featured both The Night Evelyn Came Out of the Grave and The Red Queen Kills Seven Times – is, as expected, a high quality affair. The restoration is clean and crisp, gifting Alberto Spagnoli's gorgeous cinematography the love it deserves, and while there are a handful of minor flaws in the source audio (dating back to its original recording, available in English and Italian languages), it looks and sounds the part. A solid range of special features includes an audio commentary with genre experts Alan Jones and Kim Newman, an excellent interview with Sybil Danning (covering her early career and work on Red Queen), and a featurette with critic Stephen Thrower (beware of a couple of spoilers for The Night Evelyn Came Out of the Grave!) which does tend towards recounting the plot. Additionally, there are archival featurettes from a previous release circa 2006 (heavy on the credit sequences and clips, in places), and the usual selection of trailers with an alternative opening. Fun Facts: Martin's apartment in the film is the same location used for the Wardh's apartment in The Strange Vice of Mrs Wardh (Sergio Martino, 1971), and at one point during its North American release the film was curiously called Blood Feast.

N.B. Screenshots are captured from an alternative source and not the Blu-Ray (as I don't have a BD-ROM drive).
Posted by Nick Thomson at 17:30