#FWOAN - the most difficult shot...

In my previous post I talked about "For Want Of A Nail", the short film that I wrote the screenplay for, and now I'll dig in a little deeper to one particular part of the production: the most difficult shot to capture.

There's an old adage in film making that says 'never work with children or animals', but I think we should also add dominoes to that list, and here's why...

Bookending the screenplay are two brief scenes that take place in "The Domino Room", a dark and metaphorical space that will provide a visual that ties in to the protagonist's plight. Now, picture the scene on-set: a cramped attic space, hot lights and closed windows, several crew members, and packs of dominoes glued to a black table top.

A post shared by Oakhill Productions (@oakhillproductions) on Sep 3, 2017 at 3:31pm PDT


The shot sounds simple enough: our lead actor Clark has to place a domino on the table in front of the camera, then we pull back to reveal many dominoes - but, in actuality, achieving the shot was anything but simple.

Without the use of CGI, we were going to get this done in real life, but it was a very technical shot to pull off. To begin with, you only see one domino in the frame, then a hand comes in and places a new domino. Technical issue #1: getting the domino placed perfectly central within the frame with no hesitation, but also at the exact angle at which it will catch the light. Next, after the hand withdraws from the frame, the lights gradually rotate to reveal a whole host of dominoes that emerge from the dark - and now the camera dollies backwards. Technical issue #2: despite our crew's best efforts, the natural and uneven floorboards weren't the best surface on which to build a dolly track. Technical issue #3: focus. Combining close foreground action, with revealed details in the background of shot, as well as a camera moving backwards proved to be a delicate and precise dance. Technical issue #4: framing. Amongst all this movement, the camera also had to tilt and pan to help reveal the large spread of dominoes within the frame. 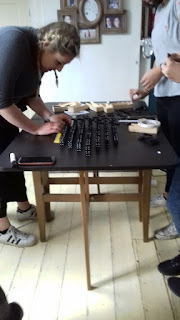 Olivia and Charlotte preparing the dominoes on the morning of Day 3.

Suffice it to say, with all that going on - and having to be pulled off flawlessly in combination - we burned through quite a lot of takes. Sometimes the placement of the domino was askew - off-centre, or slightly turned away from the light. Sometimes the focus slipped, or shifted at the wrong moment. Sometimes the framing or the dolly movement went off target. Sometimes the lighting didn't quite sweep through the shot at the exact moment intended. There were so many elements that needed to align.

Things were beginning to get slightly tense on-set as the temperature rose within the cramped confines, and we even tried doing the whole thing in reverse with the intention of flipping the sequence backwards in the edit so that it would play out as originally intended. Ultimately, with various resets, we went north of twenty takes ... but we finally got it. 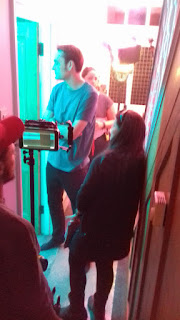 This was a simpler sequence to get, but this gives you an idea
of how cramped it can be making a film inside a normal family home. 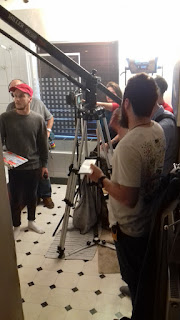 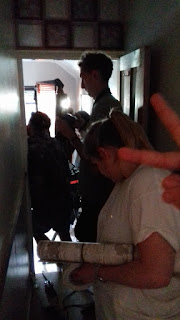 The main bathroom sequences were filmed in a normal-sized family bathroom.
Cosy conditions in which to work, most definitely, but complex sequences were achieved.
We had a few complicated scenes littered throughout our shooting schedule. Imagine trying to pull off complicated camera moves and choreographed actions for the actors within the corridors and cloakrooms of your average family home - all with carefully hidden lighting and crew members - and it's not surprising that we blew a few takes for technical reasons. However, in those few particularly difficult sequences, just as it was looking like we might not get the shot, everything came together. Some of these sequences were a real challenge to film, but they look fantastic in-camera - and in the end that's all that matters: what is within the frame.
Posted by Nick Thomson at 18:00