For Want Of A Nail

I've alluded to a project called "For Want Of A Nail" for a while now on this blog, and finally I can say a bit more about it. 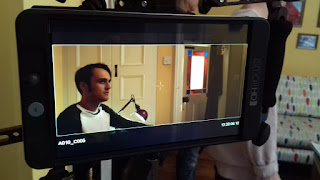 A year-and-a-bit ago I wrote a short screenplay (adapted from my short story), entered a competition, got short-listed, and ultimately my script was picked to be the one that was to be made into a short film by Oakhill Productions (one of their past projects is the award-winning short film All's Well, which most recently won the audience choice award at the Veteran's Film Festival for its portrayal of PTSD)...


I've been fortunate to be involved in the process throughout - in December last year I was there alongside Ali (the producer and head honcho at Oakhill Productions) to help pick a director for the project. Lucy Barnes (whose short film "Lucid" is a wonderfully made and deeply emotional look at dementia) was chosen and we then moved ahead as a trifecta of creative minds to develop the script, a process which also included a workshop that took place in early April of this year. The workshop involved a series of actors working alongside volunteers from the charities Mind UK and OCD Action, as the subject of the film revolves around Obsessive Compulsion Disorder. 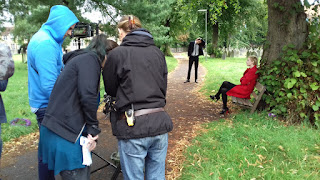 Last day of the shoot: Director Lucy works with DoP Yana and 1st A.C. Rob,
while actors Clark and Thomasin prepare for a vital scene.

Prior to writing the screenplay I had noticed that my own OCD (which I'd kept quiet about - until recently - since I learned that I had it) was beginning to get on top of me: specifically my compulsions were getting more intricate, the urge to act them out getting stronger, and all in conjunction with a litany of intrusive thoughts. As my own way of tackling it, I wrote "For Want Of A Nail".

The workshop was an excellent way for the actors to learn more about OCD and what it entails not only for those who suffer from it, but for those who are close to the sufferer. Our volunteers' candid honesty about their own OCD proved to be a great help for the actors as they performed several scenes from the script, and in-turn this helped me finesse the screenplay into its final form. 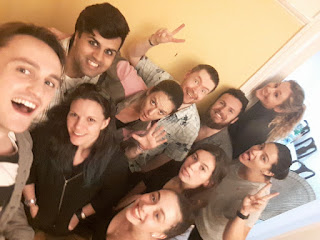 In June we held a day of casting, but organised it in such a way that the actors auditioned together in various pairings. A few weeks later we'd settled on our chosen cast - Clark Alexander, Lisa Opara, and Thomasin Lockwood - and then it was action stations for the rest of the production team to get everything in place for the shoot, which took place September 1st through September 4th across three locations and what ultimately turned out to be 78 individual set-ups. To put this into context, the 1st Assistant Director had recently worked on a feature film that was composed from 250 camera set-ups, so 78 is quite a lot for what is aiming to be a fifteen minute short. We were gifted with a talented and dedicated crew who made sure it was not only a productive set, but also a fun - and polite - set.

For Want Of A Nail now enters the post-production process. I'll post more about the project over the coming months and share some more behind-the-scenes pictures at regular intervals. To see more about the project on social media, follow the Oakhill Productions Twitter account (#FWOAN) and Instagram.
Posted by Nick Thomson at 17:59