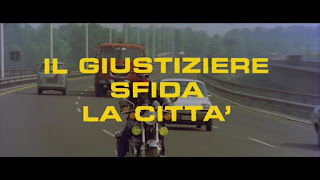 “I'm not scared now that you're here.” All the boys admire Rambo (Thomas Milian, The Cynic, The Rat, and The Fist), the rogue with a scuffed heart of gold, as director Umberto Lenzi (Nightmare Beach) mashes Sergio Leone's Dollars trilogy with The Godfather for this well-crafted poliziotteschi where a drifter rides in on a (steel) horse and gets entangled with two criminal gangs. Italy in the 1970s was a hotbed of headline-grabbing violence from high profile kidnappings to home-grown terrorism, and it was against this backdrop that 'Eurocrime' films dashed onto silver screens in a cacophony of squealing tires and blazing guns... 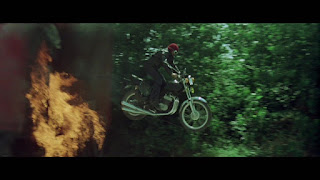 “It's an organised private police force. You know how fast crime is escalating – robberies, killings, kidnappings. So now if anyone wants protection they can hire us.” Riding into town like a dusty wanderer of the Italian highways, Rambo is greeted with open arms by best friend Pino (Mario Piave, Almost Human) and his family. He has been away for an unknown amount of time for vague reasons, his return equally as enigmatic, but still this contemporary cowboy won't be pinned down. Pino is part of a private police force, one of many that have sprung up in reaction to a swathe of hard line criminality across the nation, but Rambo can't be tempted to join. He's an outsider and a free agent who's got his buddy's back, but with one foot always out the door seeking escape or adventure elsewhere. 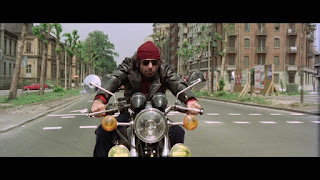 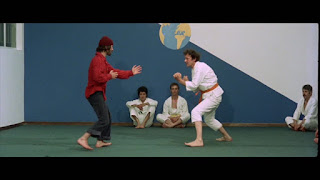 “The criminal element has got the city bottled up tight, they might just as easily kill you.” Pino has big dreams for his career and family and so, when a doctor's son is kidnapped, Pino hatches a plan to track down the child, stage a rescue, and walk away with the glory. There's a new criminal boss on-the-rise by the name of Conti (Luciano Catenacci, Kill, Baby … Kill!), and his gang are more ruthless than they know. When Pino gets too close for comfort, Conti's thugs rub him out, but their initial relief will soon turn into a furnace of regret once Rambo sets his mind on vengeance. He didn't want to get involved with Pino's plan and didn't do enough to stop him, now the man's wife is a widow and his child is without a father. The situation must be rectified by any means necessary, and only Rambo has the wits and gall to pull it off! 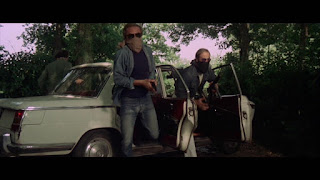 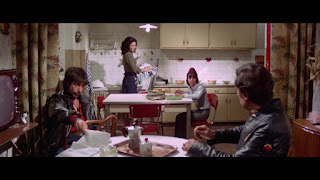 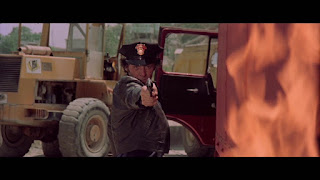 “All this thieving, murder, kidnapping, rape, and mugging – things were better in the war during the occupation.” The late Umberto Lenzi was well known for his aggressive directing style, and his films burn bright with a sense of on-screen savagery, but what's most interesting about the garishly-titled Syndicate Sadists is the sardonic sense of humour that tears a streak through proceedings. Rambo has little interest in authority, and no respect for criminal goons, but treads a path through a liminal space – neither white hat or black hat – as he brings brutal tactics to bear on a just crusade. Gunfights, car chases – proper action and shit (to quote Hot Fuzz) – commands the screen with some lead-spraying gun battles and teeth-rattling punch-ups (second only to the stoic Maurizio Merli's fist-chucking on-screen persona). Two particular highlights are a two-vs-one scrap on-and-around a pool table as well as a thrilling chase sequence, which kicks off with Rambo launching his motorcycle out of the back of a burning truck. 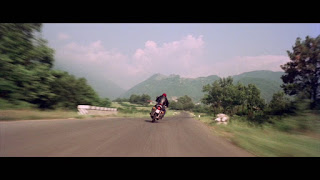 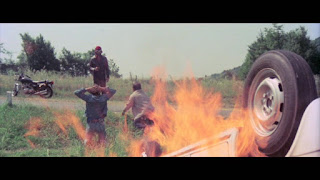 “While you were away Conti grew large gonads and edged in on the monopoly the old Sicilian boss had here.” However, the action is balanced against a well-structured screenplay by Vincenzo Mannino (House On The Edge Of The Park), which keeps the viewer invested in the core characters, while keeping the roguish wit sharp. In one scene Rambo handcuffs Conti and his mistress to a toilet and, with unbridled confidence, avails himself of the facilities before snarkily dropping the key into the bowl. If that isn't the move of an all-powerful alpha male, then what is?! However, the script isn't without some weaker points, such as the fairly thankless role of Flora played by Femi Benussi (Strip Nude For Your Killer), but even a somewhat frail Joseph Cotton (The Third Man) as crime boss Paterno still plays strong due to the film's mixture of themes – more of which later. 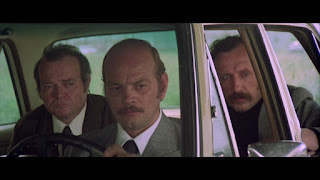 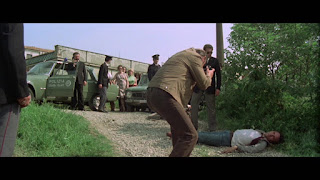 “It's my script and I know all the lines. Now do you want me to start killing off characters or are you gonna give me the dialogue as written?!” In 1974 Thomas Milian starred in Umberto Lenzi's crime thriller Almost Human, in which the actor played Giulio Sacchi, an out-of-control wrecking ball with an exceptionally violent streak. Such an aggressive character was borderline demented on-screen, and yet the following year here was Milian back with Lenzi again, but playing a very different character in the form of Rambo (Milian read David Morrell's novel First Blood and became obsessed with the name). Rather than a dangerous basket case, Milian's Rambo proves to be an opportunity for the actor to show off his softer side – which still involved kicking copious amounts of arse with a wry sense of humour. 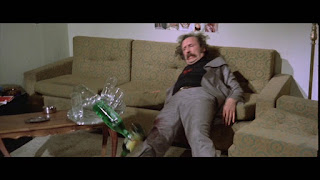 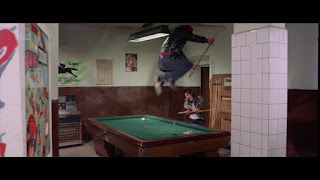 Riding along the smoggy motorways into Milan, his face masked with goggles and a bandanna, Rambo cuts an ethereal figure. Much like Clint Eastwood in A Fistful of Dollars (itself an Italian spin on Yojimbo), Rambo rides into town on his own version of a horse – a motorcycle, which is fetishised throughout the film from its revving engine to the shape it slices through the air on winding country roads. The idea of the motorcycle, the romantic imagery of it – as a symbol of freedom and speed-fuelled adventure – is touched upon throughout the film. Rambo's friend Pino Scalia has motorbike envy (his is rusting and kind of weedy-looking), while Pino's son – at one point seen wearing a red beanie in homage to his hero – aspires to become a man of agency and freedom via his own motorcycle. 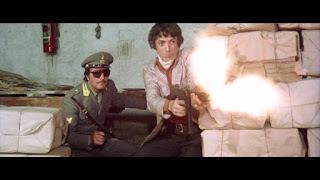 Rambo, much like the motorcycle, represents freedom. He is a man who doesn't want to be boxed-n by your rules or anyone else's for that matter, and he'll deal with things his way and his way only. This may sound like an uncompromising figure, but Rambo regularly undercuts the tension surrounding him with sardonic quips from bar fights to supposed deaths (another nod to the influence of A Fistful of Dollars). Dressed in a leather jacket, shades, and a bright red wool hat (which figures into his playful disrespect for authority figures in the criminal underworld – see his arrival at Paterno's villa), Rambo is ultimately a boy at heart. While this dashing rogue does rekindle a fling with Flora off-screen, the film is far more interested in casting this lone wolf drifter as a best friend/father hybrid, perhaps like a big brother, to Gino Scalia and the Marsili boy. However, despite living in an unmistakably adult world – rife with crime and grief – Rambo has a habit of running off. He's got to keep on moving (much to the quiet dejection of Flora), and must always be in-motion, unable to settle down as trouble stalks him from pillar to post. 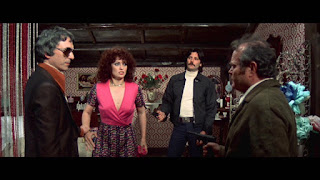 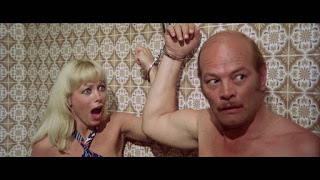 “Now the son of a bitch thinks he's bigger than we are. An impression that must be quickly corrected before his ambition drives him mad.” Indeed, these themes of fathers and sons, of one generation mingling with the next, is further reflected in the triumvirate of ageing crime boss Paterno (overseeing a declining empire from the seclusion of a remote villa), his son (champing at the bit to assume control of the family interests), and his main rival Conti (ambitious, in his prime, aspiring to criminal 'greatness'). It's interesting to compare the various father figures depicted in the film: Paterno is about to lose his grip on everything, Dr Marsili is entirely at the mercy of his son's kidnappers, the aged bartender (Rambo's father?) stands idly-by with world weariness, and Pino's aspirations on the cusp of middle-age come with devastating consequences. Meanwhile, Rambo – with no fixed address – is able to roam from place-to-place, dispensing affection and ass-kickings in equal measure, but he's a boy in a man's body who is always running away from his deeper problems. He solves bad situations, but might it be better for some folks close to him if he just kept on riding? 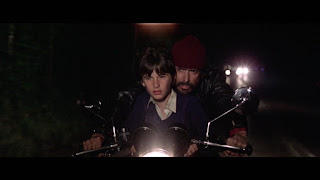 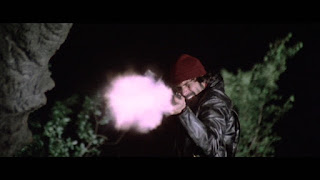 “Yeah, stay outta the way, I'm all his.” Number 25 in The Italian Collection by 88 Films, Syndicate Sadists (reviewed here on DVD, but also available on Blu-Ray) does feature some variable audio and video from time to time – dialogue is occasionally indistinct (likely as per the source elements) while the restoration proves to be a strong effort, clearing away most of the damage while keeping that pleasing granular feel that has been lost in the 21st Century with the switch to digital cameras. The extras include two featurettes – a talkative interview with director Umberto Lenzi and an informative (and playful) comment piece by Mike Malloy. I'd previously heard some quite mixed reviews of this film, and once I eventually bought a copy it took me months to get around to actually watching it – but I should have done so sooner, as Syndicate Sadists turns out to be one of the best Eurocrime movies of the 1970s thanks to its strong script and a rousing central performance by Thomas Milian.
Posted by Nick Thomson at 17:26