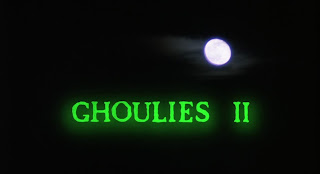 “Look out! The behemoth returns!” After the somewhat limited Ghoulies (1985), the ghastly little demonic hell spawn return, this time to wreak havoc at a full-blown carnival. Surely these devious teensy troublemakers will find something to do with all these guillotines, switchblades, and unoccupied toilet bowls lying around... 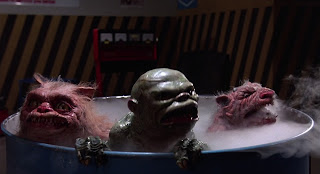 “I'm one of the denizens of Satan's Den.” After a priest fails to dispatch a burlap sack-load of the snickering, snarling ghoulies – in a conveniently placed open vat of highly toxic bubbling goo – the cackling wee buggers hitch a ride upon a passing truck, heading on its way to the next stop on The Hardin Family Carnival's route through the country. On board are Larry (Damon Martin) and his alcoholic Uncle Ned (Royal Dano, Killer Klowns From Outer Space), who soon meet Philip Hardin (J. Downing), the slick 'n' sleazy yuppie son of the carnival's owners – “the company”. He's arrived to oversee an audit of the entire enterprise with one simple stipulation: if you ain't turning a profit, you're out on your arse. 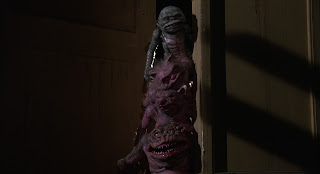 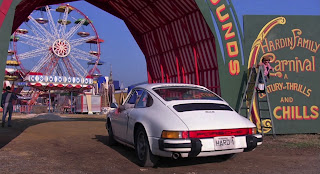 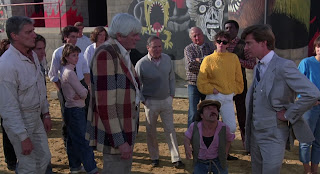 “An evil drug, caffeine – it wakes you up.” With the loss of his livelihood and the very fabric of his travelling family, Uncle Ned stumbles upon the solution at the sharp end of a hangover, when he believes that in one of his drunken stupors he actually performed real magic and summoned the ghoulies to help put some pep back in the step of the rather dated Satan's Den spook house attraction, now too tame for modern audiences hooked on slaughterhouse movies at the video rental store. Nobody believes him, of course, assuming his drunken depression has once again got the better of him, much to the concern of his nephew Larry and short-of-stature Shakespearean actor-turned-carnie Sir Nigel Pennyweight (Phil Fondacaro, Land of the Dead). 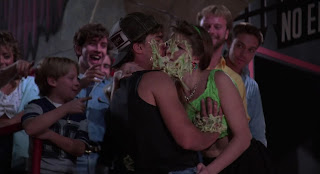 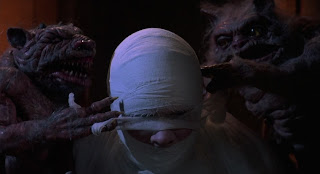 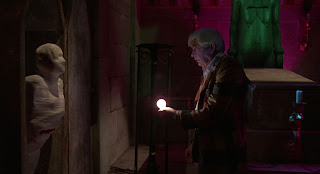 “Have you seen my little Muffy?” / “Who hasn't?” However, when the lacklustre Satan's Den spook house suddenly becomes popular due to the ghoulies' troublemaking, crowds and cash flood in – and Philip Hardin senses an opportunity for a hostile takeover to squeeze the green for all its worth. But how long will it be before they realise that these naughty gnomish monsters cannot be controlled, and how many will have to die in the process? 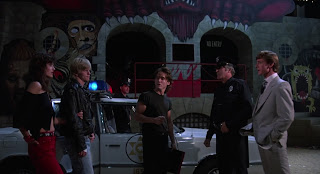 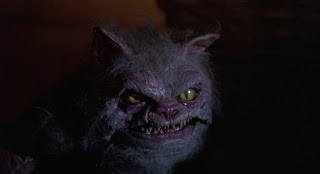 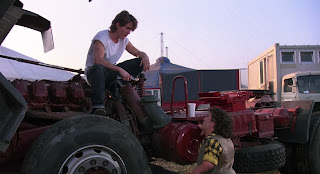 “Bon appetite, motherfucker!” Much like Puppet Master II, Ghoulies II is what the original film should have been. Chock full of diminutive demon spawn running about the place causing chaos and cackling like a razor-toothed version of The Three Stooges, the second film ramps up the scale and the carnage and has a boatload of fun along the way. The Hardin Carnival setting provides ample opportunity for colourful visuals, entertaining characters, and fleeing crowds of terrified thrill seekers, while the ghoulies themselves have also seen marked improvements. After the crude but nonetheless charming practical puppets in the first movie, the more detailed and workable designs in the second outing allows for a great deal of fun, with a few glimpses of some excellent stop motion animation thrown in here and there. 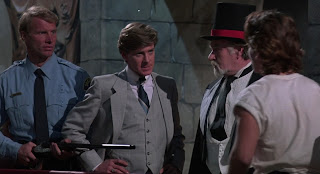 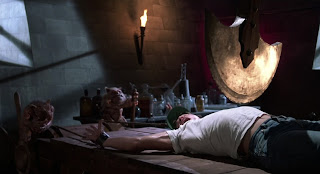 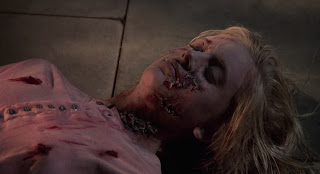 “I'm an actor, Sir – not a freak!” While the ghoulies get up to a hell of a lot more trouble this time around, the film was trimmed from its original R-rating to a more tame PG-13. However, this is the reconstructed uncut version, with all the flesh-chomping and bloody limbs floating-on-by restored. It's tame for an “R” rating, but there's a decent amount of semi-gruesome enjoyment to be had, including a generally more satisfying use of the 'ghoulie in the toilet' poster promise of the original film. While you see very little of the actual kill, your mind fills-in the blanks as one of the ghoulies' victims is presumably snacked-on from the, ahem, bottom up. As an aside, when originally rating the movie, the British Board of Film Classification hacked away at a scene involving children using throwing stars, one of many such weapons (including nun-chucks) that were anathema to chief censor James Ferman at the time. Ghoulies II may not score very highly in bloody kills, but there is plenty of chaos strewn throughout the film, especially in the final act when the totty wee beasties are unleashed upon the whole of the Hardin Carnival and quickly set about sabotaging rides, running over people in dodgems, and indulging in a spot of target practice at the shooting gallery. One of them even hops inside a boxing glove and hurls itself at someone's head just for the hell of it! 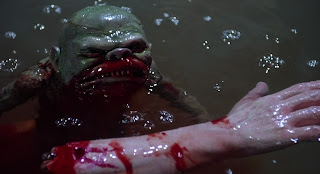 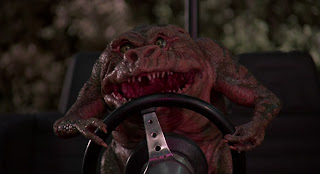 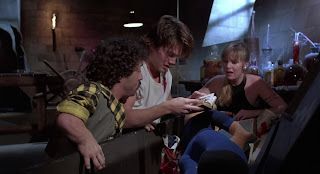 “I command you – go back to the hell that spawned you!” The script by Dennis Paoli (Castle Freak), with story by Charlie Dolan, not only escalates the fun to the levels expected of the original film, but accompanies that with some decently drawn characters (a huge improvement compared to the previous entry). While supporting players like Nicole (Kerry Ramsen), a former high wire act with a fear of heights, or the tunes-lovin' rowdy teens (including Sasha Jenson of Dazed & Confused and William Butler of Leatherface: Texas Chainsaw Massacre III) don't get a huge amount to do, the overall characterful vibe of the Hardin Carnival hooks the viewer in as the unconventional family confront the forces of 1980s yuppie-engorging profit margins. However, it must be said that Phil Fondacaro, as Sir Nigel Pennyweight, steals every scene in which he appears, giving the viewer a rich character who boasts emotional intelligence, loyalty, and a fighting spirit to accompany his wry wit and sense that the wider world habitually underestimates his abilities. 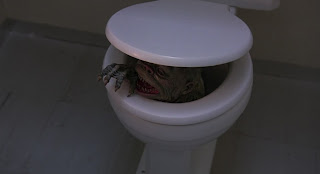 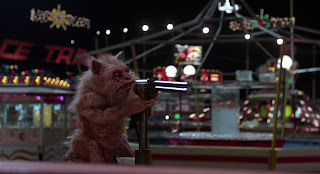 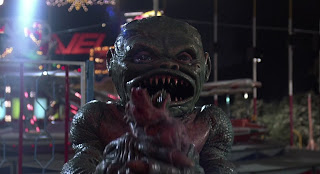 “What openings are there for second rate hobgoblins?” Between 1984 and 1994, there was quite the succession of modestly-sized creature mayhem going on. Gremlins kicked things off to huge success in 1984, with Ghoulies being the first to hop on the bandwagon in 1985. Along came the endlessly peckish Critters in 1986, with Ghoulies II in 1987 and Critters 2 in 1988. The first year of the 1990s saw both Gremlins 2 and Ghoulies III: Ghoulies Go To College, before a one-two punch of Critters 3 and Critters 4 in 1991 and 1992 respectively before, finally, Ghoulies IV appeared in 1994. And that's without mentioning the likes of Munchies (1987), The Gate (1987), Hobgoblins (1988), and Gate II: The Trespassers (1990), and various such films with 'small troublemaking monsters' as part of their appeal. Ghoulies II, much like Gremlins 2 and Critters 2, ups-the-ante on all fronts and, somewhat like the famous 'critter ball', a 'giant ghoulie' is even tossed into the mix for a good old jolt of 'man in a monster suit' glee, reminiscent of the final spectacle witnessed in Humanoids From The Deep. The bite might not always be pin sharp, but it's a well crafted mini-monster flick that mostly manages to deliver on the promise.