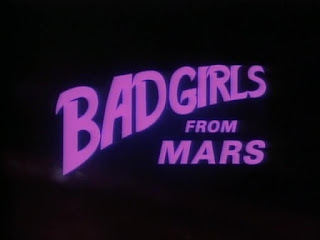 “Boy, what a girl goes through to send her brother to proctology school!” There's a killer on the loose, slaying their way through the set of a low budget trash cinema extravaganza, and while it's a tough job trying to keep your head attached to your body, it's seemingly a tougher job keeping your clothes on... 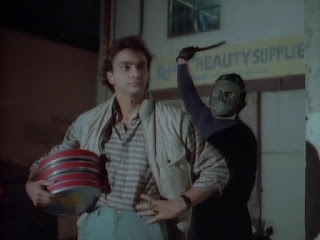 “There's no room on Mars for limp dicks.” Box Office Spectaculars is a low budget production company churning out cut-rate run 'n' gun genre trash filled with wobbly sets and costumes that have a habit of falling to the floor, and their latest epic is 'Bad Girls From Mars' – think Plan 9 From Outer Space, but with boobs … lots of boobs. Hollywood's gossip grinder is running full steam ahead with rumours that the production is terminally jinxed, thanks to a succession of leading actresses who have met with untimely demises on-set. 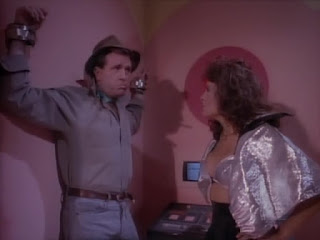 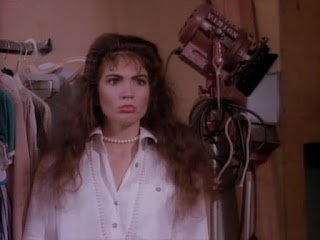 “As your producer I'm telling you it's the right thing to do. Besides, she's got great tits.” As it turns out, cut-throat producer Mac Regan (Jeffrey Culver, Virgin High) is working with fellow money-man Ortelli (Al Bordighi) on an insurance scam that is netting them quite the tidy profit. Who's next in their firing line? Certainly not Myra (Brinke Stevens, Nightmare Sisters), eager to climb the Tinseltown ladder from costume girl to leading lady, but rather Emanuelle (Edy Williams, Dr Alien). Madam to the rich and famous, tell-all author, and a sought-after model, she's got the sexual drive of a prowling predator and a quip on the tip of her tongue for any given moment. 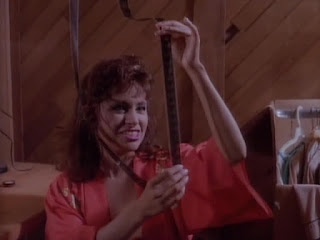 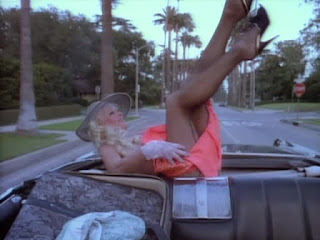 “Hey, this guy ain't homeless – he's the director!” Overseeing this disastrous production is embattled director TJ McMasters (Oliver Darrow), the Orson Welles of the gutter, tasked with wrestling this clusterfuck onto celluloid while navigating the choppy waters left in the wake of lead actor Richard Trent (John Henry Richardson, Attack of the 60 Foot Centerfold), an absolute sleaze ball who's looking to bed every female that crosses his path despite the nearby presence of his live-in girlfriend Myra. As if the killer insurance scam wasn't bad enough, an actual killer soon announces their arrival through a mounting pile of bodies and a series of poorly-rhymed notes. Will this sci-fi spectacular ever make it to the silver screen?! 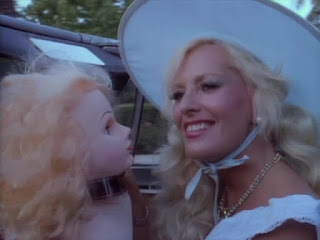 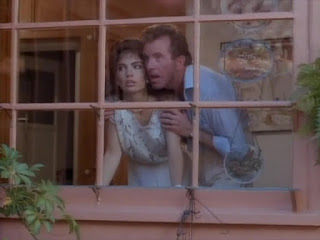 “Roses are red, melons are round, don't try looking for Emanuelle, 'cos she'll never be … located.” Shot on a budget of $52,000 over a mere five days, and alternatively known as 'Emanuelle Goes To Hollywood', Bad Girls From Mars is an opportunity for Fred Olen Ray (Hollywood Chainsaw Hookers) to turn his lens on the craft of ultra low budget genre filmmaking with a jubilant degree of self-awareness. On-screen the crew is small, the dresses smaller, while besieged director TJ is chugging alka seltzer & Jack Daniels one minute, getting trampled into the garbage by his oblivious crew the next, and then getting KO'd by masked assailants for dessert. Fans of this variety of filmmaking, which answered the 'content hunger' of the explosively popular VHS rental market of the time, will get a particular kick out of the inside look at how these films were made. For example, the moment where TJ battles with his lead actress who's intent on spending time rehearsing the scene, a time-suck on a schedule that requires twenty-four pages of dialogue to be shot in a day. Placating her modest aspirations for artistic craft, he whispers to his camera operator to shoot the 'rehearsal' while encouraging the actors to rehearse with 'full energy'. 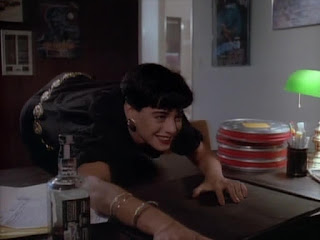 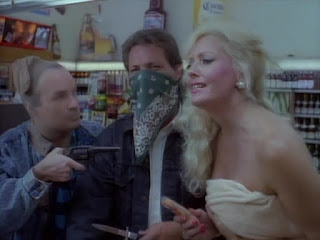 On films like these it was common to be shooting on 'short ends' of celluloid film stock (left-overs from bigger budget productions that were cheap to purchase), necessitating a 'one-and-done' approach – no second takes. Indeed, for all the derision these films have taken from the mainstream, it must be recognised that it's not easy to nail as much as ten minutes worth of dialogue in a single unbroken take with little-to-no rehearsal time: just look at some of the scenes in Nightmare Sisters (starring beloved 'Scream Queens' Brinke Stevens, Linnea Quigley, and Michelle Bauer) and consider the pressure: that much dialogue, some of it leaning towards numerous comedic tongue twisters, where a second-take could actually put the entire production over-budget. So how about a little more respect for so-called 'trash cinema', eh? 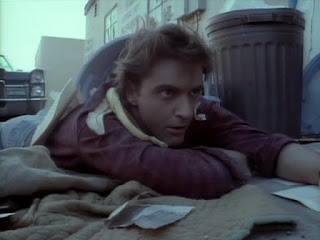 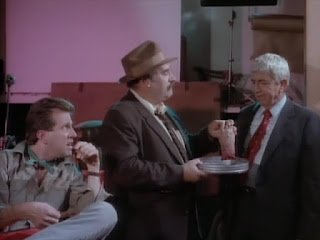 “The smell of garbage … it turns me into a wild woman!” Similarly energetic and humorously-minded as Olen Ray's earlier Hollywood Chainsaw Hookers, Bad Girls From Mars packs its fair share of entertainment as well as a few eye-opening moments. In the case of Edy Williams' madam-turned-actress Emanuelle, she spends much of the movie gamely mugging at the camera and popping out of her clothing – in one instance whilst doing her own stunts. Indeed, Emanuelle's entrance to the film is a memorable one, in a sequence evidently shot on-the-fly and without permits, as she hops into the back of TJ's car to change clothes … the car being a convertible that's actually driving through Beverly Hills! Williams doesn't just hop into the backseat, though, as she even squirms about on the rear of the vehicle – as it's driving on a public road – slithering her way in and out of various body-hugging dresses. How many Oscar winners are you going to see pulling that off? 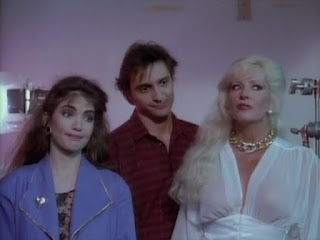 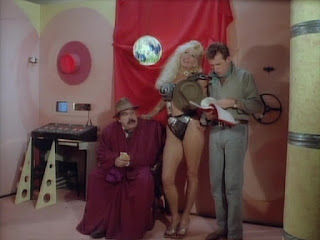 As if that wasn't audacious enough, her backstory tips into the shockingly absurd. Explaining her animalistic lust for a garbage-soaked TJ, she details how her first sexual experience took place in a dumpster. Pretty mad, eh? Not as mad as the next detail – he was 18 and she was 12. Quite the jaw dropper of a line, especially these days, and more-so considering this is a comedy! So fevered by the memory – and the pungent aroma of trash can juice – she pins a petrified TJ to the wall and has her way with him. 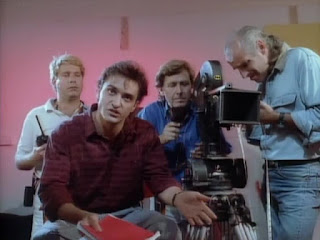 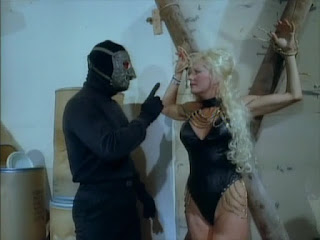 “What time is that sex machine due here?” Working on such low budgets, the filmmakers behind this sort of fare had to use whatever 'exploitable element' they could afford, and in the days before the World Wide Web the most precious of these elements was whippin' off the old clobber and parading around in the scud. The film is riddled with nudity, with a more than 50/50 chance of Williams' scenes alone involving some excuse to let the twins fly free in the breeze. Indeed, the 'major boobage' is machine-gunned across the screen at such a rate it boggles the mind, but it's also played for humour as much as budget-savvy titillation. Case-in-point, TJ's assistant/lover Martine (Dana Bentley, Sorority House Massacre 2) getting into a jealous rage over Emanuelle's rapacious thirst for her director's bits and pieces, which results in a spot of strip-wrestling … as you do. 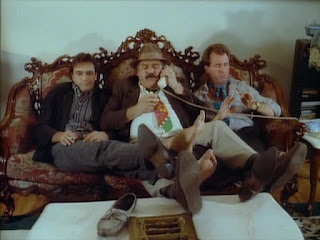 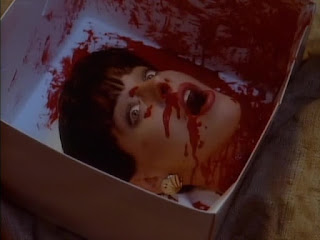 Indeed, while the mainstream would take one fleeting glance at a film like this and condemn it as softcore sleaze for the pathologically dunderheaded, it's actually far more honest and self-aware than any big budget sizzler that pretties up its 'boobs n butts' audience-pleaser scenes with slick production value and pop songs. Filled with silliness, from cartoonish 'boing boing' sounds when Emanuelle climbs a staircase to a rim shot played after a knowingly awful joke to the sight of Richard, TJ, and Al the Cop (Robert Ruth) lounging together on a sofa painting each other's nails, Bad Girls From Mars is only interested in having a good time – and nailing it, or thereabouts, in one take. 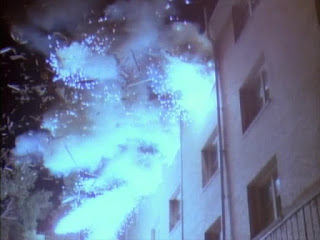 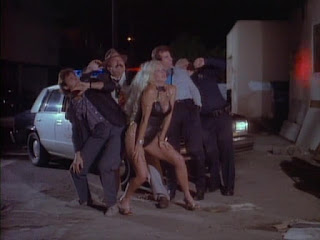 “Will this movie never end?” Written by Mark Thomas McGee (Witch Academy) and Fred Olen Ray, this is a hell of a fun flick. It's worth watching just for the unbridled silliness of the scene in which two bumbling thieves botch a grocery store robbery because they're too distracted by Emanuelle, clad only in a towel. Bad Girls From Mars is nothing short of completely honest about what it is and what it wants to do – and who can complain about that? Well, anyone other than the self-righteous fart-sniffers of the Twittersphere with their 'Mary Whitehouse of the 21st Century' approach to anything that strays from the narrow line of proscribed acceptability, that is. Scrounging around in the scabby alleyways and warehouses of Hollywood, it's a bonanza of barminess, a hootenanny of hooters, and a cavalcade of cheese – check it the fuck out!

This is a review of the shorter cut of the movie, as eight whole minutes were hacked out for the home video release.