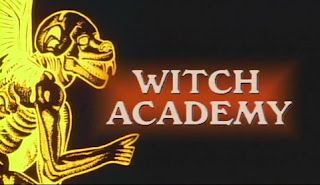 “I lost a gallon of blood because she saw some cockamamie movie!” A gaggle of sorority sisters who just so happen to be witches, the Satanic temptation of a goofy nerd, and costume design exclusively from a lingerie catalogue is pretty much the jist of this straight-to-video Scream Queen comedy horror flick – oh, and some Hollywood royalty even turns up to join the fun!... 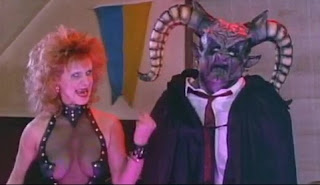 “Relax, everything's under control. We just invited her over for a little degradation.” Opening with a quote from Ted, the 'long lost brother of Edgar Allan Poe', which reads: “And while we move amongst the graves and dream of things we like to save, the thoughts and visions that linger best are girls with huge, gigantic breasts...”, the tone is already locked and loaded: a combination of mammaries and malarkey. The girls of the Sigma Gamma sorority are excitedly getting ready for a frat party, but Tara (Michelle Bauer, Death Row Diner) and Wanda (Suzanne Ager, Evil Toons) are still finding plenty of time to play tricks on each other – and they just so happen to be … witches? Well, they can fling bolts of electricity to give each others' norks a zap and play some kind of vague off-screen prank involving fake phone calls, so … witches, then? Joined by Darla (Ruth Collins, Doom Asylum), the girls' have ultimately got themselves tarted-up for nothing as frat broseph Neal (Don Dowe, Trancers II) calls up to cancel the bash because some serious pledge hazing needs doing. Imagine that, a frat boy putting preppy pranks before bevvy of beautiful sorority babes! 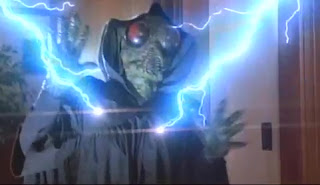 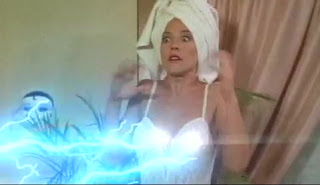 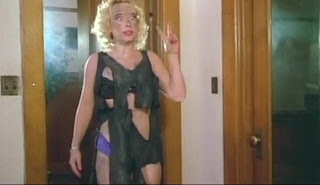 “What's this broad wearing – chainmail panties?” Desperately in-need of a good wheeze for the evening, the Sigma Gamma gals extend an invite to the exceedingly uncool and relentlessly nerdy Leslie (Veronica Carothers, Vice Academy 3 & 4), to see if she has the right stuff to join their sorority. Yeah, right! Goofy Leslie's idea of sexy dress-up is seemingly from the 'bed sheet collection' of Dowdy Dames 'R' Us, while the Sigma Gamma gals' favourite past-time is giving each other a 'clothing optional' ass paddling! Cream-pied on arrival (steady now), the Sigma Gamma girls launch into the hazing with buckets of cold water and icky concoctions made for chugging, all before poor old Leslie is chained up to a water pipe in the rat-infested basement. Kind, gentle, and thoughtful, Leslie has always felt unwanted everywhere she goes, and so naturally she's the perfect target for some infernal enticement, and wouldn't you know it, but The Devil himself appears and offers Leslie the chance to take a walk on the Sigma Gamma side. Surely there won't be any rotten consequences to that proposal? 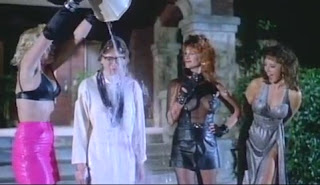 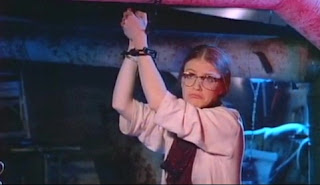 “Souls schmouls. Only losers go for souls these days.” Transformed into a stunner, clad in a red lace body suit, Leslie poses as her 'sister' Becky, and quickly finds herself much more to the liking of Wanda, Tara, Darla, and particularly their sadistic Den Mother Edith, who looks straight out of an S&M-themed music video for a hair metal band and has a liking for knuckle-duster-busting gut punches to keep her buxom underlings in-line. With Wanda jealous that Edith has taken a considerable shine to 'Becky', it's not long before the Sigma Gammas discover their Den Mother chained up dead in the basement with a look of ecstasy on her face and a puncture wound in her neck. Could there be a vampire with a broken tooth on the loose, or has Leslie's deal with The Devil gone and backfired? 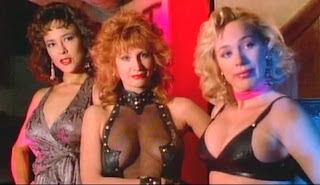 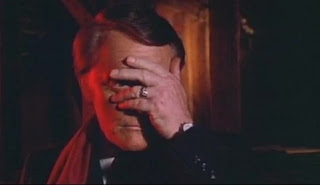 “What an ignoranimus!” Still holding onto enough of what made straight-to-video Scream Queen flicks of the 1980s so much fun, Witch Academy entered the 1990s with much the same attitude as what came before it: a low budget, a single location, a small cast, oodles of 'bewbs and bum-bums', a couple of sort-of-flashy special effects, and one or two rubber monster suits thrown in for good measure. Low budget genre cinema is often at its best when the filmmakers approach it from an angle of “Whatever I have to hand is going in this movie!” – indeed, that's precisely what Robert Rodriguez did with his $7,000 debut feature El Mariachi – and this tale of vicious sorority witches scampering around in lacy lingerie, while a rented rubber monster occasionally pops up to pick them off, is no different … in principle at least. 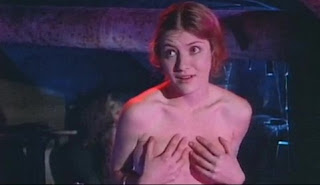 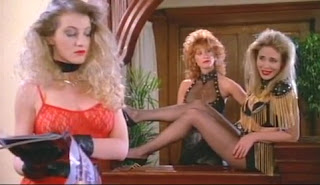 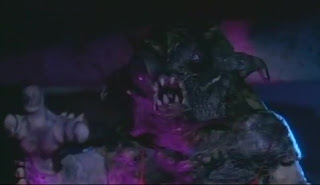 “This place is turning into a morgue.” Another enjoyable aspect of this kind of sleazy VHS fare was stunt casting, such as David Carradine randomly popping up in Evil Toons, or Gunnar Hansen (iconic for his portrayal of Leatherface in 1974's horror cinema landmark The Texas Chainsaw Massacre) appearing in Hollywood Chainsaw Hookers. It was seemingly almost a legal requirement that if Hansen was appearing in a movie, then a chainsaw would likely find a use, such as in the enjoyable low budget creature feature Mosquito (Gary Jones, 1994). Similarly, Witch Academy splashes what was no doubt a decent wedge of its $140,000 budget on two name stars that would have been familiar to a wide audience at the time. Prescilla Barnes (The Devil's Rejects), who plays savage Den Mother Edith, had by this point been seen in major television hits Three's Company and The Love Boat while also having a supporting role in Timothy Dalton's second-and-final outing as James Bond in 1989's License To Kill. The really 'big get' of the flick, however, is Robert Vaughn. Cast as The Devil, Vaughn was best known for his role in The Man From U.N.C.L.E. (1964-1968), as well as a whole host of guest starring roles in shows like The A-Team; he was also not unfamiliar with 'slumming it' in genre fare, hence his appearances in Zombie 5: Killing Birds and CHUD II: Bud The Chud. 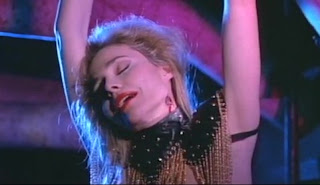 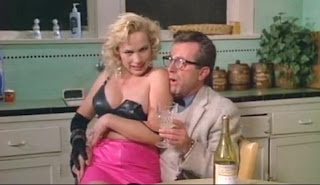 “You're just looking for another cheap excuse to change your top.” Written by Thomas McGee and Directed by Fred Olen Ray, who teamed-up the year prior to gift audiences with the gleefully silly Bad Girls From Mars, Witch Academy unfortunately tends to flounder as often as it flies. There's some good 'n' goofy gags, like The Devil wincing when he gets a paper cut while thumbing through the Necronomicon, or Wanda conducting an impromptu blood test akin to John Carpenter's The Thing in order to expose who the monstrous killer is but, and you may glance incredulously at the next five words, the script lets it down. 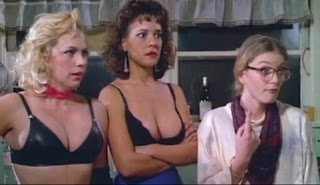 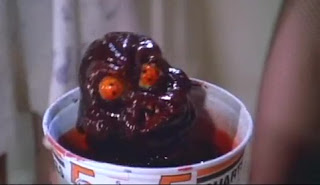 We don't find out The Devil's scheme until the very end of the film, so that subplot lacks a certain narrative oomph, while the very notion of sorority witches is barely explored – it hardly comes up in conversation and almost never influences the plot in any significant way. Frustratingly, it feels like a better movie was left on-the-table during its conception, with far more focus paid to the assemblage of lingerie and leather outfits. Still, Vaughn and Barnes both bring chops and class to the production, while John Henry Richardson (Hollywood Chainsaw Hookers) gives good gurn as the sleazy Professor Lamar, and Michelle Bauer is reliably gung-ho as always. Collins, meanwhile, filters Marilyn Monroe through a 1980s-styled softcore gauze, and Ager dials it up to eleven and doggedly sticks to it. 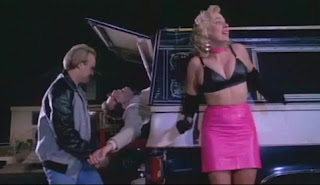 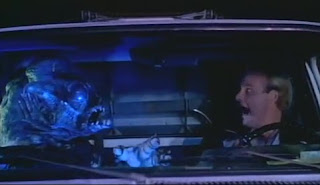 “No police! Police scenes are boring; they tell the audience everything they already know.” McGee and Ray like to keep their audience in-the-loop, never once condescending them, nor attempting any degree of dishonesty about the mechanical purposes of video rental fare such as this. Overall it makes for good 'n' saucy fun (in less than four minutes we've already had our eyes poked by not one but two doses of T&A), but Witch Academy never quite manages to find its high gear or grasp its true potential (however modest that may be, that is … each to their own and all that). It has some moments, such as The Devil explaining he doesn't have horns any more thanks to cosmetic surgery, or the moment when Wanda does a handstand and continues delivering dialogue for no reason whatsoever other than the actress could do it. Moments like that make these sort of movies as fun as they are, it's just a shame that Witch Academy doesn't have more of them. As a nifty bonus, though, the credits conclude with a selection of out-takes, offering a brief glimpse behind the scenes, which is quite unusual for this type of movie.