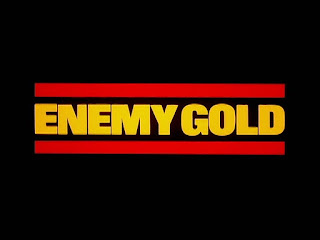 “You gotta stop thinking of me as just another pretty face.” This ninth entry in the 'L.E.T.H.A.L. Ladies' saga was, originally, never intended to happen. After eight movies, perhaps Andy Sidaris was feeling wrung dry, and so Fit To Kill was supposed to the final film in the series. However, in the movie industry 'final chapters' have a particular habit of being followed by several sequels (Friday the 13th Part IV, anyone?). In some ways it's business as usual in the Sidaris-verse, but in other ways Enemy Gold sits apart from what came before: the smaller cast features only a few familiar faces (all playing different roles), and instead of Andy Sidaris at the helm it's his son Christian Drew Sidaris (who would also go on to write & direct the tenth entry in the franchise). Hell, there's not even a single Abilene family member in sight!... 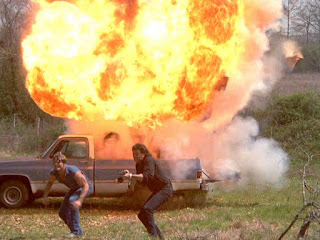 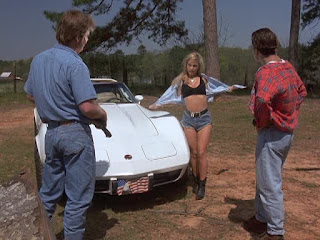 “The tip of this arrow explodes three seconds after penetration.” / “Reminds me of an old boyfriend.” Opening with two Confederate soldiers escaping a Civil War battle to bury some stolen Yankee gold in the woodlands of Texas, the action abruptly shifts to modern day Dallas as agents from 'The Agency' Chris (Bruce Penhall, Do Or Die) and Mark (Mark Barriere, Fit To Kill) are joined by Becky Midnite (Playboy Playmate January 1992 Suzi Simpson). Together they take down a drug smuggling operation where cocaine is being transported while hidden inside watermelons, (kinda like the drug-stuffed pineapples idea in Savage Beach) only to find themselves suspended by Dickson (Alan Abelew), The Agency's new head honcho of the Dallas division. 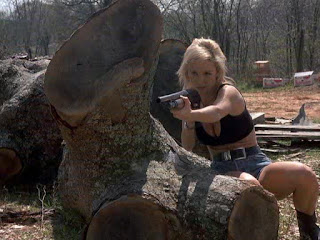 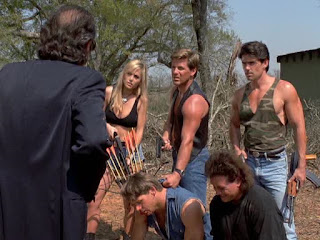 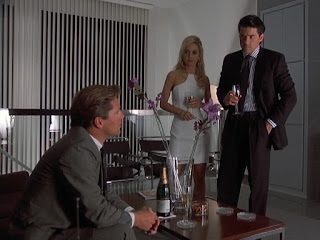 “You better be nice to me or I'm gonna tell Uncle Jessie what you did to that chicken last night.” / “Don't mind him, his parents is Cousins.” With drug lord Santiago (Rodrigo Obregón, The Dallas Connection) out for their blood, and their former boss Ava (Tanquil Lisa Collins) not able to help, what are Chris, Becky, and Mark to do? Sounds like it's the perfect time to head out to the Texas woods for a holiday … the same woods where Chris and Mark used to hunt for Quantrill's civil war gold as kids … the same woods where the legendary gold is actually buried … the same woods where Santiago and his expert assassin Jewel Panther (Julie Strain, Day of the Warrior) plan to snuff their enemies on the sly and take the gold for themselves! 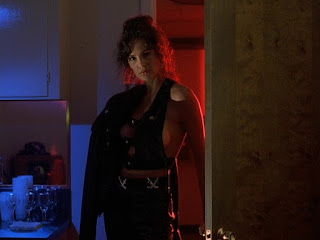 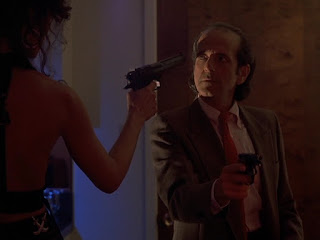 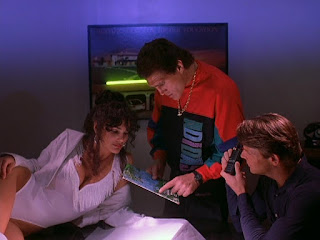 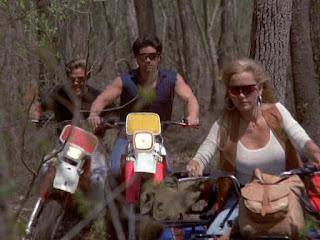 “You certainly have a flare for this line of work.” Andy and Arlene Sidaris only served as executive producers on this film, so Enemy Gold somewhat awkwardly stands apart from the rest of the series, which had been based on the interconnected tales of Donna Hamilton (Dona Speir) and the other familiar names of The Agency. Written by Wess Rahn and Christian Drew Sidaris, the same playful pun-tastic dialogue remains, and while the story is much more focused than what usually came before in the franchise – such as the ludicrously overcomplicated Picasso Trigger – it nonetheless feels a bit lacking. Despite a solid amount of action (gun fights, explosions, dirt bike chases), the film can't quite capture the same crazy spark that Andy Sidaris was known to give his films. 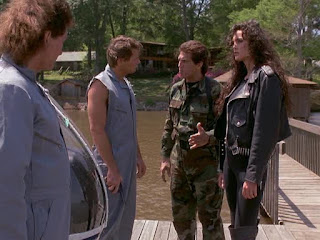 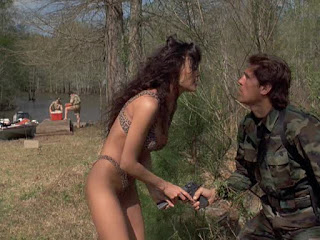 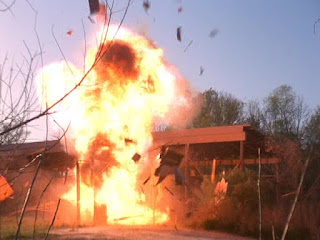 “Give me a couple of minutes and I'll be dressed to kill.” This extends to the film's cast of characters. Considering that Dona Speir made for a considerable presence as Donna Hamilton in the previous seven films in the 'L.E.T.H.A.L. Ladies' series, her absence here is quite noticeable (the actress left for pastures new outside the film industry). It would be a tall order for anyone to fill her shoes, so it's unfair to hold newcomer Suzi Simpson to the same standard, but she does get stuck into the action and is game to play in the Sidaris-verse, combining sex appeal with snappy comebacks and flying lead. Indeed, despite the surface-level characterisation (nobody's pretending this is Shakespeare) there is a decent amount of chemistry (wooden bit-parts aside) amongst the main cast. 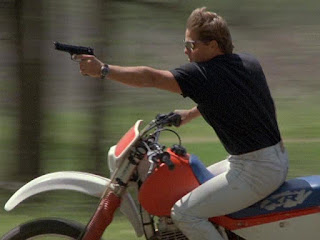 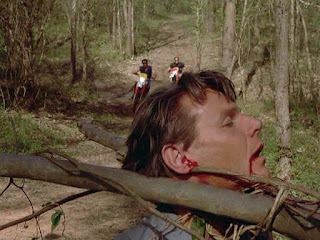 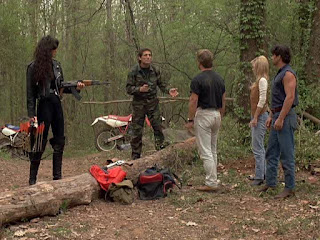 “You didn't bring me along just for my good looks.” One of the main highlights of the film is Julie Strain, here in her second appearance in the franchise, this time as another villainous assassin: Jewel Panther. Towering above most men even when not in her trademark knee-high leather boots, Strain confidently strides through the movie with the bodily grace and deadly nature of her namesake jungle cat. She oozes authority, too, from swatting down boozed-up sleaze balls at a strip club to an extraordinarily out-there scene in which she steals a boat: having dressed down her employer Santiago, she appears out of the shadows in a leopard print bikini (and those boots, of course) while 'out for a hike', and snuffs the two Park Rangers with a silenced pistol (where was she hiding that?) before roaring away in the boat like some majestic supermodel/killer. 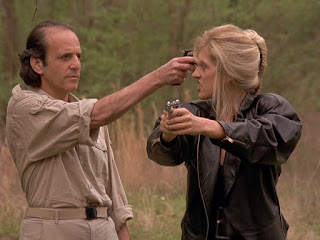 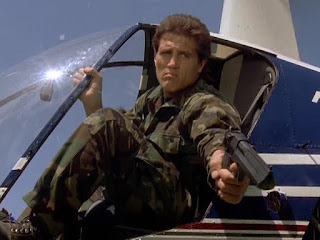 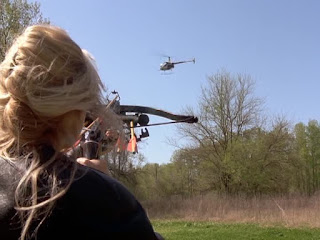 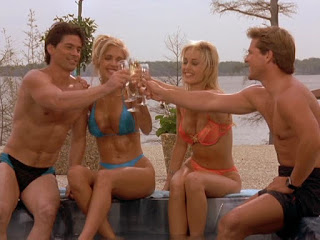 “Who is you?” / “English major.” Certainly making the most of its beautiful cast (busty gals and rock hard abs, ahoy), Enemy Gold may not really live up to what preceded it, leaving the viewer disoriented after having seen the world through Andy Sidaris' eyes for so long, but in the world of low budget 'guns and gals' TV movies it does what it needs to do – sultry saxophone and wailing guitars and all. The action scenes have a little more spark to them, and the flick is put together quite professionally, but with the likes of Donna and Nicole nowhere to be seen, Enemy Gold sorely needed to crank up the craziness to smooth things out. Perhaps it wasn't so noticeable at the time, but when viewing these films close together in a box set, the shift in direction feels a bit jarring. Mind you, with liberal use of hot tubs for champagne celebrations and the ever-present sight of an exploding helicopter, not everything has changed.